Crows have long been considered cunning. But their intelligence may be far more advanced than we ever thought possible.

The crow’s name was Betty. And she was on her way to stardom. A gaggle of Oxford University scientists watched in wonder as she casually picked up a piece of wire in her cage and then used a nearby object to bend it at one end, transforming the wire into a hooked tool. That tool allowed Betty to hoist up a small container of meat – delicious pig’s heart – from inside a plastic tube. Lunch was served.

Back then, in 2002, Betty’s feat was a source of amazement. How did this crow solve such a complex problem so spontaneously? It suggested mental acrobatics akin to our own. This, the headlines read, was one stunningly clever crow.

Except that Betty was not quite as special as some first thought. Many years later, research showed that New Caledonian crows are habitual tool-benders. In the wild, they do it all the time. Observers had initially been startled by Betty’s behaviour because it looked as though she had come up with the design for her hooked tool on the fly. Like an engineer inventing a new machine. In reality, New Caledonians have evolved to make hooked tools from soft twigs as part of their usual foraging activity.

It was less a moment of genius – and more an expression of her nature.

“I don’t want to downplay her cognitive abilities,” says Christian Rutz at the University of St Andrews. “At the very least, it forces us to reassess how insightful Betty’s behaviour was.”

New Caledonian crows belong to the corvid family of birds – as do jackdaws, rooks, jays, magpies and ravens. In recent years, the brains of these birds have been studied ever more closely. There is no doubt that some of them display impressive cognitive abilities. But intelligence is a murky subject. What exactly is it, in the first place? And why has it evolved?

Corvids are helping us to answer these questions. 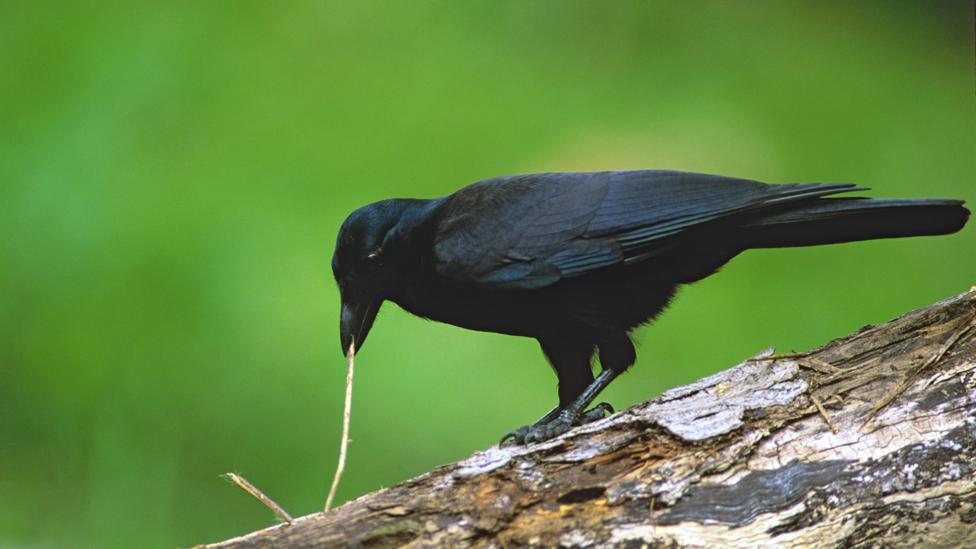 The New Caledonian crow uses twigs and branches to extricate grubs and insects from inside trees (Credit: Alamy)

Intelligence is rooted in the brain. Clever primates – including humans – have a particular structure in their brains called the neocortex. It is thought that this helps to make advanced cognition possible. Corvids, notably, do not have this structure. They have instead evolved densely packed clusters of neurons that afford them similar mental prowess.

The specific kind of brain they have doesn’t really matter – corvids and primates share some of the same basic capabilities in terms of problem-solving and plasticity, or being able to adapt and change in the face of new information and experiences. This is an example of convergent evolution, where completely different evolutionary histories have led to the same feature or behaviour.

It’s easy for humans to see why the things corvids can do are useful. From identifying people who have previously posed a threat to them or others in their group to using gestures for communication – we too rely on abilities like these.

Rutz is unequivocal. Some birds, like the New Caledonian crows he studies – can do remarkable things. In a paper published earlier this year, he and his co-authors described how New Caledonians seek out a specific type of plant stem from which to make their hooked tools. Experiments showed that crows found the stems they desired even when they had been disguised with leaves from a different plant species. This suggested that the birds were selecting a kind of material for their tools that they knew was just right for the job. You wouldn’t use a spanner to hammer in a nail, would you?

Ranking the intelligence of animals seems an increasingly pointless exercise when one considers the really important thing: how well that animal is adapted to its niche

In the wild, New Caledonians use their tools to scoop insects out of holes, for example in tree trunks. Footage of this behaviour has been caught on camera.

You might think that some animals are smarter than others – with humans at the top of the proverbial tree. Certainly, humans do rely excessively on intelligence to get by. But that doesn’t mean we’re the best at every mental task. Chimps, notes Dakota McCoy at Harvard University, have been shown to possess better short-term memories than humans. This might help them to memorise where food is located in the forest canopy, for example.

Ranking the intelligence of animals seems an increasingly pointless exercise when one considers the really important thing: how well that animal is adapted to its niche. Intelligence is, first and foremost, a means towards specialisation.

As Rutz says, analysis of crows’ intelligence “cannot be divorced from the natural history of the animal”. And New Caledonians are far from the only non-human species to have evolved the ability to use tools. The list of other animals that share this trait includes chimpanzees, parrots, alligators and even crabs. 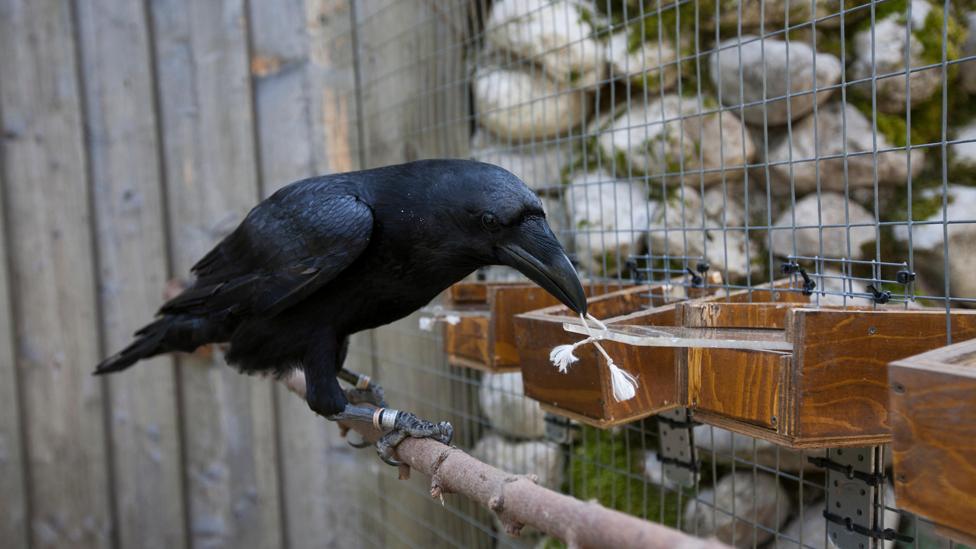 While cognition may help a creature to do things required for survival in its own environment, other animals get by via other means. Where a crow uses mental abilities and tools to access hard-to-reach food, a giraffe simply stretches its long neck. Clever cogs just have another tool from evolution’s own toolbox.

That said, “clever” animals can sometimes perform tasks beyond those strictly demanded by nature.

This seems to dwarf Betty’s humble hooked tool demo. A crow has now been shown to apply its cognitive abilities to advanced problem solving. It’s a situation the bird would never encounter in the wild, but it excels all the same. True, 007 had already learned how the individual steps worked but solving them in sequence presents an even greater challenge. It’s a hint that this bird can plan ahead to some extent. There are likely many other fascinating things that 007 and his fellow crows can do, we just haven’t tested for them yet.

McCoy, like Rutz, also studies New Caledonian crows. In a paper published this year, she and colleagues described an experiment designed to show if the birds’ mood were affected by tool use. New Caledonians were trained to recognise that a box at one end of a table contained more food than a box at the opposite end. Then, the crows were presented with a box in the middle of the table – suggesting an uncertain quantity of meat inside.

Birds that had recently used tools to retrieve food from a container approached the mystery box more quickly than those that had not used tools. This indicated that tool use made the crows more optimistic, says McCoy.

That’s not to say they were necessarily “happy”, she adds – but it does suggest a positive relationship between tool use and expectation.

Cognition, says McCoy, can be fun. It opens a door to behaviour that isn’t necessarily essential for survival. 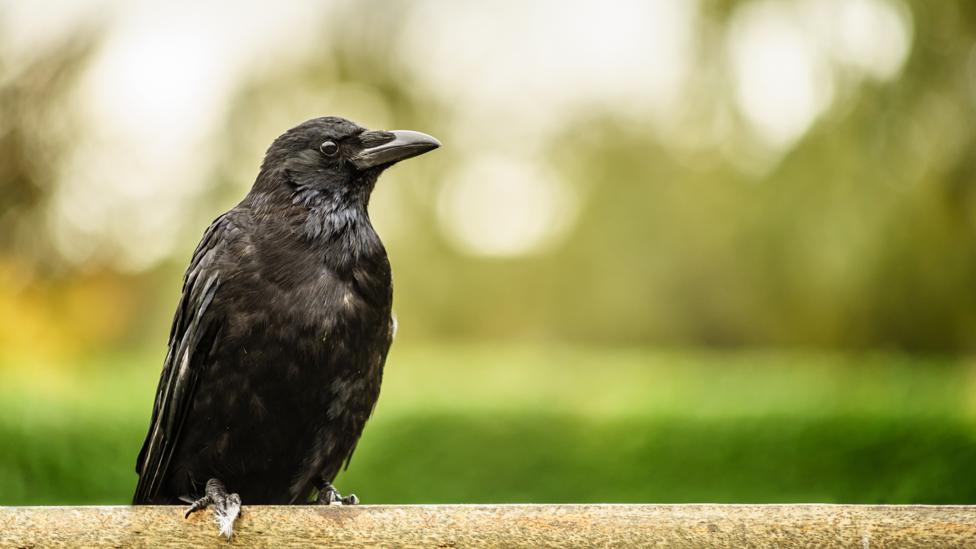 Crows have shown advanced problem solving for situations they would never encounter in the wild (Credit: Getty Images)

Crows, in fact, might be like us not so much because they are clever (and so are we) but rather because they sometimes engage their cleverness simply for fun – and so do we.

The crows McCoy studies have a natural curiosity, she says. They cheekily grab scientific equipment and fly off with it in the aviary. Young birds especially, she says, love to play. Humans are not so different, she argues: “We have these incredibly huge brains but we use them to do crossword puzzles – that’s not something that is evolutionarily selected for.”

One could argue that there are utilitarian benefits to such mental exertion. It keeps the mind sharp, it reinforces one’s abilities – all the fitter to survive. But if there is pleasure in it or if it has unexpected effects, one might also say that such activity is just part of what makes life colourful. New Caledonian crows, like us and other clever animals, have moods and memories. Strategies and expectations. They seem remarkably able to engage with complexity.

Evolution made this possible. But cognition, like life itself, serves more than just a need. Animal intelligence allows all sorts of fascinating phenomena to arise. A gorilla that recognises human language. A crow that solves puzzles. A parrot that tells jokes.

Nature provided the notes, but animal brains make the music. The mind, as they say, is the only limit.