The suits that kept Nasa’s astronauts alive in the cold void of space were sewn, one painstaking stitch at a time, by a talented team of expert seamstresses.

Scientist. Engineer. Astronaut. These are the careers most often associated with space. But there’s another activity far older than the history of human spaceflight, yet equally vital to today’s missions: the humble craft of sewing.

When Jeanne Wilson was seven, her mother taught her to sew. By age nine, Wilson was designing and making dolls’ clothes. Ten years later, in 1969, she was one of several seamstresses at ILC Dover who made Neil Armstrong and Buzz Aldrin’s spacesuits for the Apollo 11 Moon landing. (Learn 50 fascinating facts about the Apollo missions to the Moon.)

“My sister worked at a company called Playtex, which at the time was associated with ILC Dover,” says Wilson. “She was making bras and girdles.”

The sturdy light, flexible materials designed for women’s undergarments turned out to be ideal for spacesuits too. Wilson’s sister told her about an opportunity to work on spacesuits for the new Apollo mission astronauts. “I’d just turned 19, so I was very young. But I was so excited.”

• Apollo in 50 numbers: The cost
• Why your blood would boil in space
• The female astronauts who never saw space

Wilson left a job sewing suitcases. “That was production, so every thing was fast,” she says. “And then I came to ILC to work on the Apollo spacesuits and everything was very slow. Every time you sewed a seam, it had to be inspected, it had to be checked, because of the importance of what we were doing.” 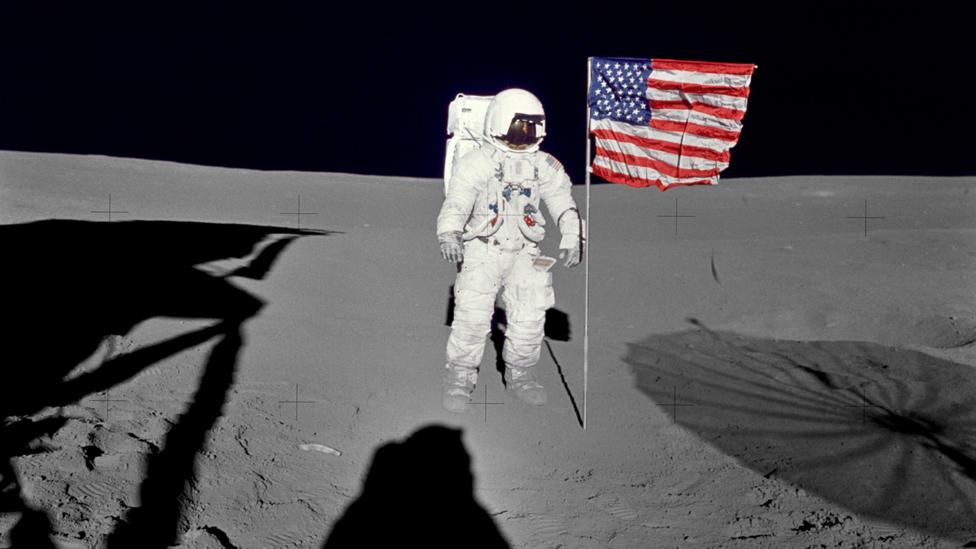 The hand-stitched suits were all that kept the astronauts safe from the harsh environment of space (Credit: Nasa)

“Even if it had 21 layers the thickness was so hairline,” says Wilson. “And you would think the fabric didn't cost that much – maybe five or six dollars a yard. No. It was almost $3,000. It was literally locked away in the safe.”

The finished suits were taken to a local hospital in Dover, Delaware. “They had to take two X-rays,” she says, “to make sure there were no pins or anything else left in the suits. There were nights we'd go home, worry and think, ‘Oh my God, did I leave a pin in it?’ And you would lose a little bit of sleep at night sometimes. You actually broke down and cried – because I know I did.”

Wilson sewed on the torso, arms and legs of the suits, as well the astronaut name badges. Other seamstresses – and they were all women – specialised in the boots or, like Joanne Thompson, the many pairs of gloves required for training and the Moon landings. The astronauts came to Delaware for fittings, often signing photographs for the seamstresses and praising their work.

We used to make them all day long and knew they were gonna be trashed. But we knew a man's life was going to depend on it

“Each astronaut had their own moulds made from their hands,” says Thompson. “The palm part had long strips that went through the fingers and attached to the knock part and there was an opening to the thumb and you had to stitch around that.”

The gloves consisted of multiple parts including convolutes – fabric ridges like an accordion “so the man could stretch his hand and move it”.

Thompson, like Wilson, had also learnt to sew as a child. She left a job at a dress factory to join ILC Dover and remained for 38 years. Now 82, she recalls the constant testing required to ensure the suit could withstand the harshness of space. 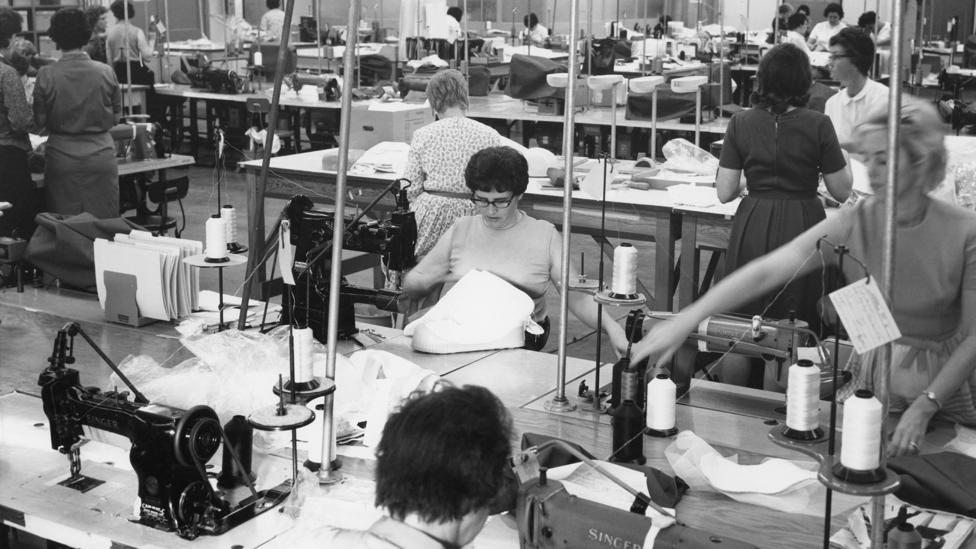 The suits had to be stitched piece by piece, with every single stitch inspected (Credit: ILC Dover, LP)

“We had to make different types of seam samples and they would send them to the test lab and they would test them until they tore,” says Thompson. “We used to make them all day long and knew they were gonna be trashed. But we knew a man's life was going to depend on it so we just kept on going.”

In 1973, only a year after the Apollo missions ended, the skills of a seamstress helped save America’s first space station, Skylab.

Shortly after its launch, the protective micrometeoroid heatshield unexpectedly tore off. Its crew could not board because temperatures inside were dangerously high. A replacement heat shield was needed as soon as possible and Aylene Baker was recruited from Nasa contractor General Electric to help make it.

An eye-catching image of Aylene at a sewing machine, surrounded by the heatshield’s voluminous material being held by several people, is on the walls of Nasa Johnson Space Center

“It was a 22ft by 24ft piece of material,” says Aylene’s son Herb Baker, who worked at Nasa for 42 years. “It was very thin layers of aluminium and used Mylar, laminated nylon and another thin layer of nylon. One side was bright orange, the other silver. They called it a parasol as it was like an umbrella. It folded up and deployed through a scientific airlock.”

The replacement heat shield worked. An eye-catching image of Aylene at a sewing machine, surrounded by the heatshield’s voluminous material being held by several people, is on the walls of Nasa Johnson Space Center. It’s where both Aylene, who passed away in 2004, and Herb once worked.

Fabric heat protection continued with the development of the Space Shuttle. Jean Wright joined Nasa contractor United Space Alliance from a dress shop in order to sew thermal blankets for the shuttle. 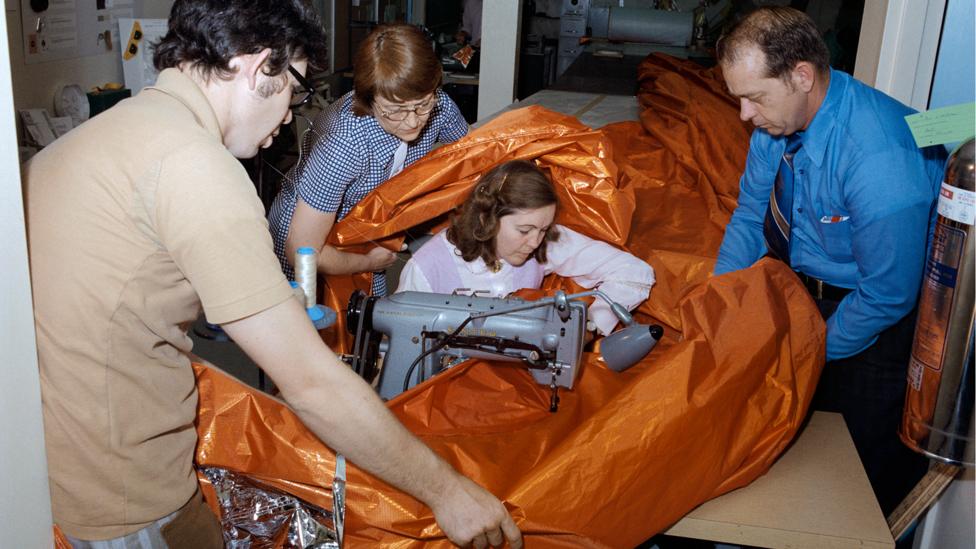 A picture of Aylene Baker stitching part of a heat shield is on display at Nasa's Johnson Space Center (Credit: Nasa)

“We did a lot more hand-sewing than people think because [for] all 2,200 blankets we have to knot the intersection where the threads meet, flip the fabric to the back and every one of those are stitched by hand,” says Wright. “We also did thermal barriers. They would take us four days apiece to do by hand. And on average, it would take 17 hours for two of us to sew all 12 of them into one wheel well. And they're only rated roughly for three flights. So that was constantly being done.”

The shuttle retired in 2011 and Neil Armstrong’s spacesuit is now in a museum. But ILC Dover continue to use seamstresses to make their suits (though one man has now joined the team).

“The basic premise of a spacesuit hasn't changed,” says ILC Dover historian Bill Ayrey. “Essentially the same suits are being used with some modifications onboard the International Space Station. So, again, life-critical. If an astronaut goes out and does a spacewalk and their space suit fails, their life is in our hands. And the suits have to hold up to the to the rigours of six hours or seven or maybe close to eight hours’ spacewalk."

Sewing continues to thrive within other areas of the space industry too. The European Space Agency’s (Esa) BepiColombo spacecraft is currently on its way to Mercury and Yvonne Mayer’s needlework is onboard. 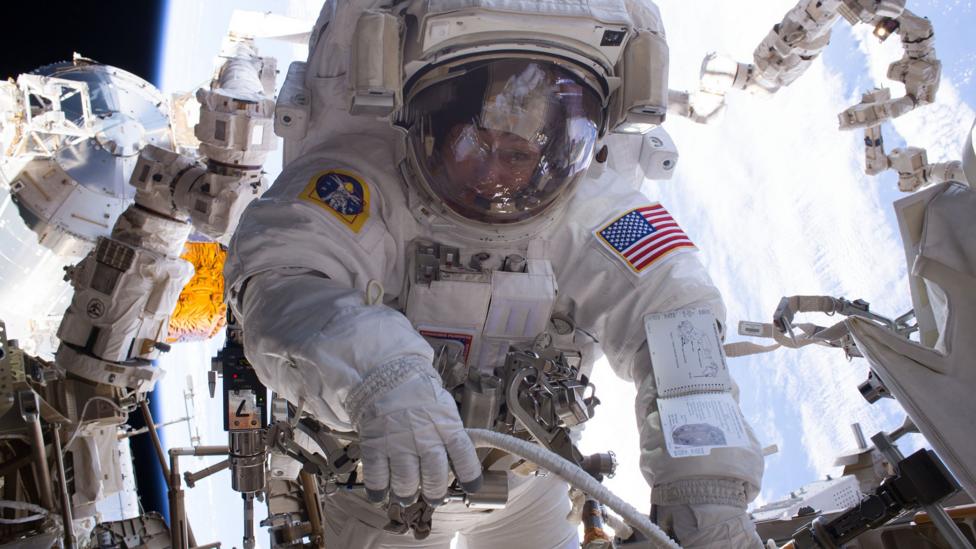 The suits needed to be tough enough to withstand long missions but flexible enough to allow the astronauts to move with as much freedom as possible (Credit: Nasa)

Mayer, a manufacturing and integration specialist for the aerospace company RUAG in Austria, began her career at fashion school. “I was never really interested in the clothes,” she says. “It’s more interesting to produce something more technical so I sew insulations for spacecraft.”

Mayer’s handiwork helps protect the spacecraft’s instruments from temperatures up to 450C (842F). “We use big long-armed sewing machines and, if there are places which we can’t reach, we sew by hand. If the material is too thick, we have to sew by hand.”

These “sew sisters” are finally getting recognition for their work. They are all seamstresses to the stars.