When complex life emerged on the ancient Earth, it looked like nothing we would recognise today.

At the south-eastern tip of Newfoundland, rugged cliffs rise imposingly above the sea. The craggy rocks are known as Mistaken Point, an homage to the many ships that met their untimely end there after sailors ‘mistook’ them for a different place. Now the wild and jagged cliffs are famous for another reason. They are at the centre of a debate about one of Earth’s greatest mysteries – just how and when did complex life first evolve?

“If you walk around the rocks you will find surfaces covered in literally thousands of fossils,” says Frankie Dunn, a paleobiologist at Oxford University.

The fossils were preserved about 570 million years ago during the Ediacaran period, when a series of volcanic eruptions covered the seafloor in ash, providing a ‘snapshot’ of life at the time.

“The way I would describe it is like walking around Pompeii, you can see the ghosts of the creatures that lived there buried under volcanic ash; it’s really an incredible experience,” says Dunn.

The Ediacaran fossils herald a watershed moment in the history of Earth – for the previous four billion years, the oceans had been the preserve of single-celled microbes, yet suddenly they were teeming with new complex life. And what strange life it was. The creatures look nothing like anything seen today.

Some, like the rangeomorphs resembled giant leafy ferns. Others had a bush, or cabbage-like appearance. Many looked like shapeless sacs, or thin, quilted pillows, while others bore a resemblance to enormous sea pens.

“Most Ediacarans are soft bodied and a bit squidgy,” says Simon Darroch, a paleontologist at Vanderbilt University in Tennessee. “The ability to form shells or skeletons didn’t evolve until the end of the Ediacaran period.” 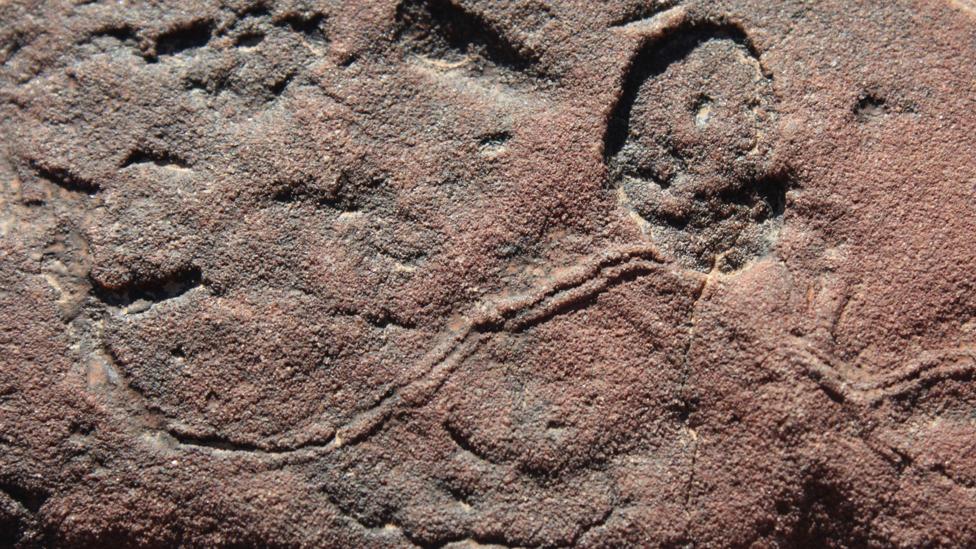 Namibia is one of the only places that records the transition between the Ediacaran and Cambrian periods (Credit: Simon Darroch)

The bizarre forms and body plans have long baffled scientists, who have struggled to place the creatures in the tree of life.

“At various points in history we’ve said they’re all this, or they’re all that,” says Darroch. “At one point they were all jellyfish, and at another point they were all a forgotten lost kingdom of animal life that went extinct. Over the last 20 years, it’s become clear that they probably represented a whole variety of organisms and fauna, some of which were animals.”

The biggest mystery surrounding the Ediacarans is what happened to them

What is clear, is that the animals arose at least 40 million years before the ‘Cambrian explosion’, the period some 541 million years ago which saw the sudden appearance in the fossil record of animals exhibiting recognisable body parts, such as fins, legs, shells and skeletons. Most of the ancestors of modern animals can be traced to this point.

However the biggest mystery surrounding the Ediacarans is what happened to them. At one point they must have been thriving: fossils of rangeomorphs and others have been discovered in locations all over the world; from Russia to Australia, and Namibia to China. However, they suddenly disappeared from the fossil record approximately 30 million years after they first arrived.

Rise of the Cambrians

The key to finding out what happened could lie in a collection of fossils known as the ‘Nama Group’ in Southern Namibia. Some 560 million years ago, the Earth was thawing its way out of an ice age, and this area was flooded with glacial water, forming a shallow sea. You can walk for hundreds of miles in any direction and see records of the animals that lived there, displayed on the surface of rocks.

The site is remarkable in that it is one of the only places that records the transition between the Ediacaran and Cambrian periods – one of the most biologically turbulent times in Earth’s history. 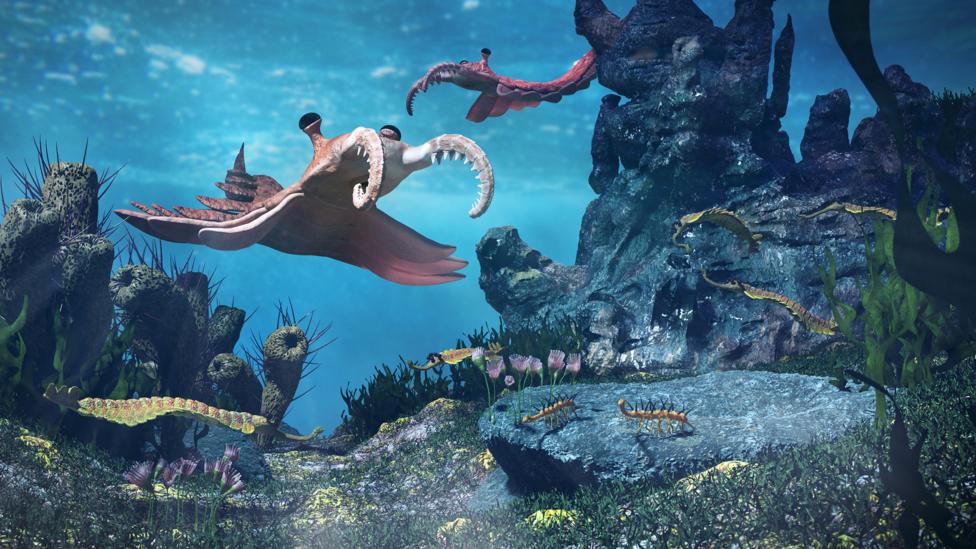 In 2013, Darroch found vast fields of what looked remarkably like burrows made in the Nama sediment – signs that these younger animals were foraging, and churning up the seafloor.

“Most Ediacarans were fairly simple animals – they didn’t move around, or do much, and they tended to live close to their food source – gooey microbial mats found on the seafloor,” says Darroch.

“However, in Namibia from 540 million years ago onwards, there is a steady increase in the intensity and diversity of different burrowing behaviours, suggesting animals were more mobile, and becoming smart in the way they foraged for food.”

Darroch argues that the arrival of these more modern, Cambrian-style animals could have changed the environment in a way that the Ediacarans just didn’t like, for example by churning up sediment and disturbing microbial mats, making it harder for Ediacarans to feed.

Some of the burrows in the sediment also looked exactly like those created by sea anemones – a predatory animal. If predators had been present, that would surely have been the death knell for the Ediacarans, who would have been unable to escape.

However, other scientists are sceptical about this theory.

“These forms happily coexisted for millions of years, and there’s evidence to suggest that they were living in different parts of seas anyway, so they wouldn’t have necessarily interacted ecologically with each other,” says Rachel Wood, professor of carbonate geoscience at Edinburgh University.

An alternative idea gaining increased traction amongst scientists is that a fall in the ocean’s oxygen levels could have caused the first mass extinction of life on Earth, comparable to the asteroid impact that wiped out the dinosaurs.

Geologists are able to work out what ocean oxygen levels were like millions of years ago by measuring the relative amounts of different types of uranium found in sedimentary rocks formed at that time. The rocks soak up a heavier form of uranium when surrounded by low-oxygen waters, and a lighter form when oxygen levels are high. 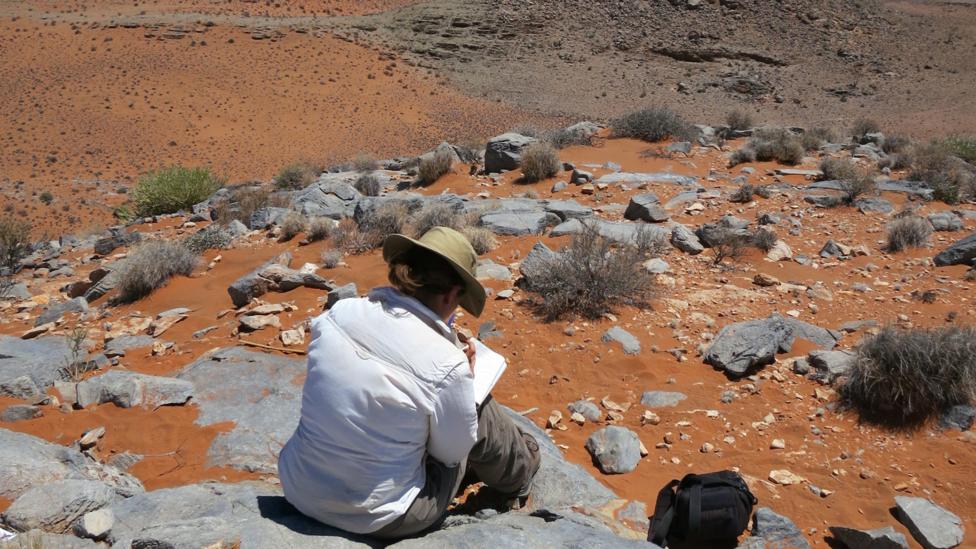 The Namibian landscape is offering tantalising clues as to what the environment was like more than 560 million years ago (Credit: Rachel Wood)

One study calculated that the percentage of the ocean floor covered by low-oxygen (anoxic) water could have risen to over 60-70%. In comparison, the figure for modern oceans is about 0.1 percent.

“We have quantitative evidence for a global expansion of anoxia in the ocean, which is closely related in terms of time to the disappearance of the Ediacaran animals,” says Xiao Shuhai, a paleobiologist and geobiologist at Virginia Tech University, who was involved in this study.

If you’re mobile, like a lot of the Cambrian-style animals were, you have a better chance of surviving by moving to an oxygen oasis – Xiao Shuhai

As waters lacking in oxygen crept over the shallow marine seas where the first animal life was thriving, some species would have been better able to cope than others.

“A lot of Ediacaran animals were sessile, which means that they did not move,” says Shuhai. “Therefore if there was rapid environmental change, they wouldn’t have been able to adapt and so were more susceptible to extinction.

“If you’re mobile, like a lot of the Cambrian-style animals were, you have a better chance of surviving by moving to an oxygen oasis, such as small pockets of oxygen or shallow water oxygen refuges.” 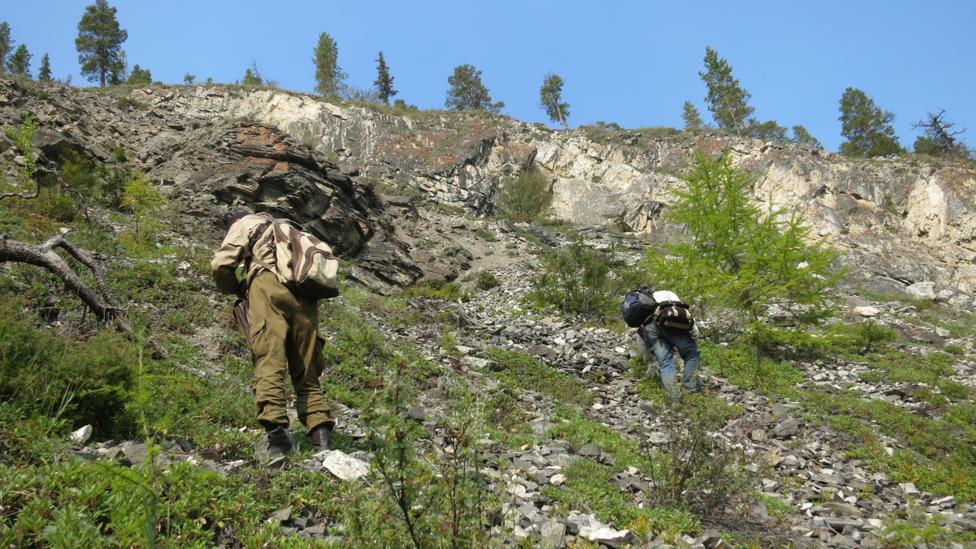 Siberia is another region where painstaking searches can revel time capsules from the distant past (Credit: Rachel Wood)

Whatever was behind their downfall, the demise of the Ediacarans could have actually paved the way for the Cambrian explosion of animal life which followed.

“If you look at any period of geological time, you often see these turn over events, where elevated rates of extinction are followed by elevated rates of speciation – this seems to be how life progresses,” says Rachel Wood.

“Once things evolve into a niche, you have to exert a lot of energy to get rid of them, so if something comes along and removes those forms, it means other things can evolve to occupy those niches again.”