The moment of passing appears to bring an expression of relief to the deceased. But what is going on in our minds? In a new collaborative series with The Conversation, we answer that question.

People often look like they are sleeping just after dying, having a neutral facial expression. But one of my relatives, who had intense pain the hours leading up to his death and lacked access to medical care, had a radiant, ecstatic expression. For decades, I have wondered whether the last minutes of life can be euphoric. Could dying perhaps trigger a flood of endorphins, in particular in the absence of painkillers? Asked by Göran, 77, Helsingborg, Sweden.

The poet Dylan Thomas had some interesting things to say about death, not least in one of his most famous poems:

And you, my father, there on the sad height,

Curse, bless, me now with your fierce tears, I pray.

Do not go gentle into that good night.

Rage, rage against the dying of the light.

It is often assumed that life wages a battle to the last against death. But is it possible, as you suggest, to come to terms with death?

As an expert on palliative care, I think there is a process to dying that happens two weeks before we pass. During this time, people tend to become less well. They typically struggle to walk and become sleepier – managing to stay awake for shorter and shorter periods. Towards the last days of life, the ability to swallow tablets or consume food and drinks eludes them.

It is around this time that experts in palliative care say people are “actively dying”, and we usually think this means they have two to three days to live. A number of people, however, will go through this entire phase within a day. And some people can actually stay at the cusp of death for nearly a week before they die, something which usually is extremely distressing for families. So there are different things going on with different people and we cannot predict them.

The actual moment of death is tricky to decipher. But an as yet unpublished study by my own group suggests that, as people get closer to death, there is an increase in the body’s stress chemicals. For people with cancer, and maybe others, too, inflammatory markers go up. These are the chemicals that increase when the body is fighting an infection.

You suggest that there may also be an endorphin rush just before someone dies. But we just don't know as nobody has yet explored this possibility. A study from 2011, however, showed that the levels of serotonin, another brain chemical that is also thought to contribute to feelings of happiness, tripled in the brains of six rats as they died. We can't rule out that something similar could happen in humans.

It is an interesting suggestion, however, and the technology to look at endorphin and serotonin levels in humans does exist.

Nevertheless, getting repeated samples, especially blood, in the last hours of someone’s life is logistically challenging. Getting the funding to do this research is hard, too. In the UK, cancer research in 2015-2016 was awarded £580m ($756m) whereas palliative care research was awarded less than £2m ($2.6m).

If pain has not really been an issue for a person earlier, it is unusual for it to become a problem during the dying process

There is no evidence suggesting that painkillers such as morphine would prevent endorphins from being produced, however. Pain isn’t always an issue when people die. My own observations and discussions with colleagues suggest that if pain has not really been an issue for a person earlier, it is unusual for it to become a problem during the dying process. We don’t know why that is – it could be related to endorphins. Again, no research has yet been done on this. 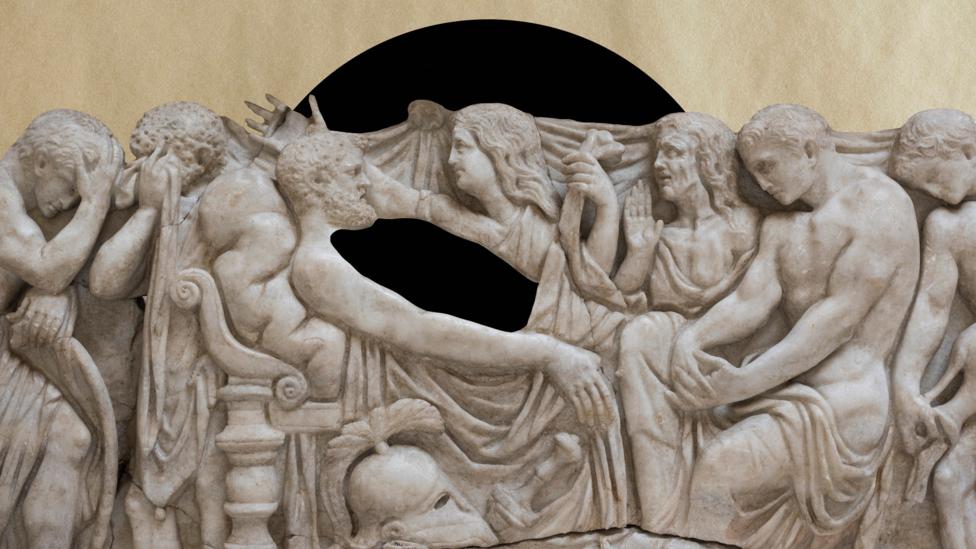 Our brains could help to protect us from severe pain at the end of life (Credit: Javier Hirschfeld/ Getty Images)

There are a number of processes in the brain that can help us overcome severe pain. This is why soldiers on the battlefield often don’t feel pain when their attention is diverted. Work by Irene Tracy at the University of Oxford demonstrates the fascinating power of placebo, suggestion and religious beliefs in overcoming pain. Meditation can also help.

But what could cause a euphoric experience during death, other than endorphins? As the body shuts down, the brain is affected. It is possible that the way in which this happens somehow influences the experiences we have at the moment of death. The American neuroanatomist Jill Bolte-Taylor has described in a TED talk how she experienced euphoria and even “nirvana” during a near-death experience in which her left brain hemisphere, which is the centre of logic and rational thought, shut down following a stroke.

Interestingly, even though Bolte-Taylor’s injury was to the left side of her brain, an injury to the right side of the brain can also increase your feelings of being close to a higher power.

I think there is a chance that your relative had a deep spiritual experience or realisation. I know that when my grandfather died he raised his hand and finger as if he was pointing at someone. My father, a devout catholic, believes that my grandfather saw his mother and my grandmother. He died with a smile on his face, which brought profound reassurance to my father.

The dying process is sacred to Buddhists, who believe that the moment of death provides great potential for the mind. They see the transition from living to dying as the most important event of your life – that point when you carry Karma from this life into other lives.

That doesn’t mean that religious people generally have more joyful death experiences. I have witnessed priests and nuns become extremely anxious as they approach death, perhaps consumed by concerns about their moral record and the fear of judgement.

Ultimately, every death is different – and you can’t predict who is going to have a peaceful death. I think some of those I have seen die didn’t benefit from a rush of endorphins. I can think of a number of younger people in my care, for example, who found it difficult to accept that they were dying. They had young families and never settled during the dying process.

Those I have seen who may have had an ecstatic experience towards the end of their lives were generally those who somehow embraced death and were at peace with the inevitability of it. Care may be important here – a study of lung cancer patients who received early palliative care were found to be happier and lived longer.

After her second or third life-threatening infection, she changed. The sense of peace emanating from her was palpable

I remember one woman who was getting nutrition through her veins. She had ovarian cancer and was not able to eat. People fed like this are at risk of serious infections. After her second or third life-threatening infection, she changed. The sense of peace emanating from her was palpable. She managed to get home from hospital for short periods and I still remember her talking about the beauty of sunsets. These people always stick in my mind and they always make me reflect on my own life.

Ultimately, we know very little about what happens when someone is dying. After 5,000 years of medicine, we can tell you how you die from drowning or a heart attack, but we don’t know how you die from cancer or pneumonia. The best we can do is describe it.

My research is focused on trying to demystify the dying process, understand the basic biology and develop models predicting the last weeks and days of life. In time, we may also get to research the role endorphins play in the last hours of life and actually get to answer your question definitively.

It is possible that we experience our most profound moment in the murky hinterland between life and death. But that doesn’t mean we should stop raging against the dying of the light. As the Swedish diplomat Dag Hammarskjöld put it: “Do not seek death. Death will find you. But seek the road which makes death a fulfilment.”

This article is part of Life's Big Questions, a new series by The Conversation that is being co-published with BBC Future. It seeks to answer our readers' nagging questions about life, love, death and the Universe. We work with professional researchers who have dedicated their lives to uncovering new perspectives on the questions that shape our lives. If you have a question you would like to be answered, please email either send us a message on Facebook or Twitter or email bigquestions@theconversation.com

Seamus Coyle is an Honorary Clinical Research Fellow at the University of Liverpool.