Loading
Disease
Can you kill coronavirus with UV light?
Share using EmailShare on TwitterShare on FacebookShare on Linkedin 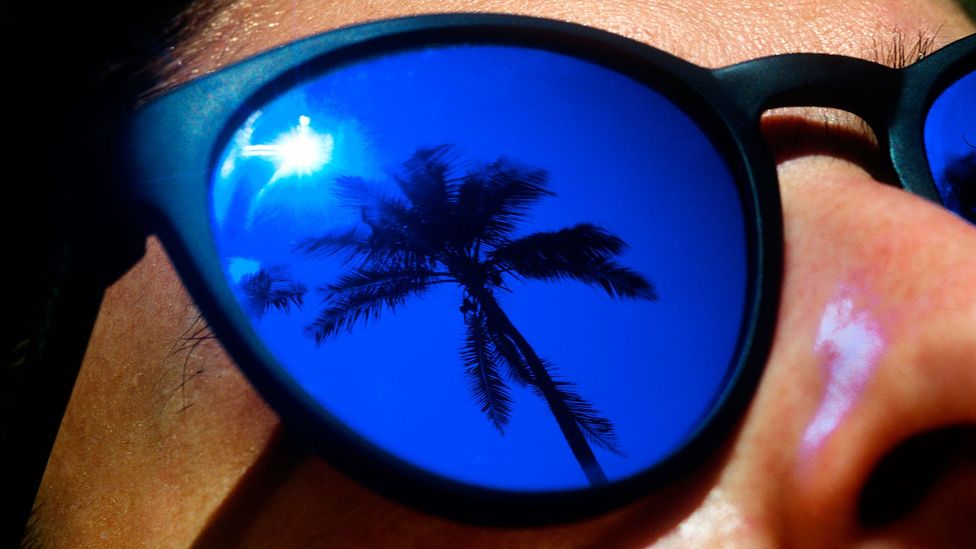 By Zaria Gorvett 24th April 2020
There’s only one type of UV that can reliably inactivate Covid-19 – and it’s extremely dangerous.

“You would literally be frying people,” says Dan Arnold, laughing in disbelief.

Arnold works for UV Light Technology, a company that provides disinfecting equipment to hospitals, pharmaceutical companies and food manufacturers across the UK. Recently, as the global anxiety about Covid-19 has reached extraordinary new heights, he’s found himself fielding some unusual requests.

“We had an enquiry from a private individual about our equipment, saying ‘Well, why can't we just get one of your UV lights and put it up on the exit to the supermarket – people can stand under it for a few seconds before they go in’,” he says.

Among the abundant “health” advice that has been swarming around the internet in recent weeks, the idea that you can disinfect your skin, clothing or other objects with UV light has proved extremely popular – and even been mentioned by the US President.

So is this a good way to protect yourself from Covid-19? And is it true that since “the new coronavirus hates the sun”, sunshine will immediately kill it, as some reports on social media have claimed?

Sunlight contains three types of UV. First there is UVA, which makes up the vast majority of the ultraviolet radiation reaching the Earth’s surface. It’s capable of penetrating deep into the skin and is thought to be responsible for up to 80% of skin ageing, from wrinkles to age spots.

Next there’s UVB, which can damage the DNA in our skin, leading to sunburn and eventually skin cancer (recently scientists have discovered that UVA can also do this). Both are reasonably well known, and can be blocked out by most good sun creams. 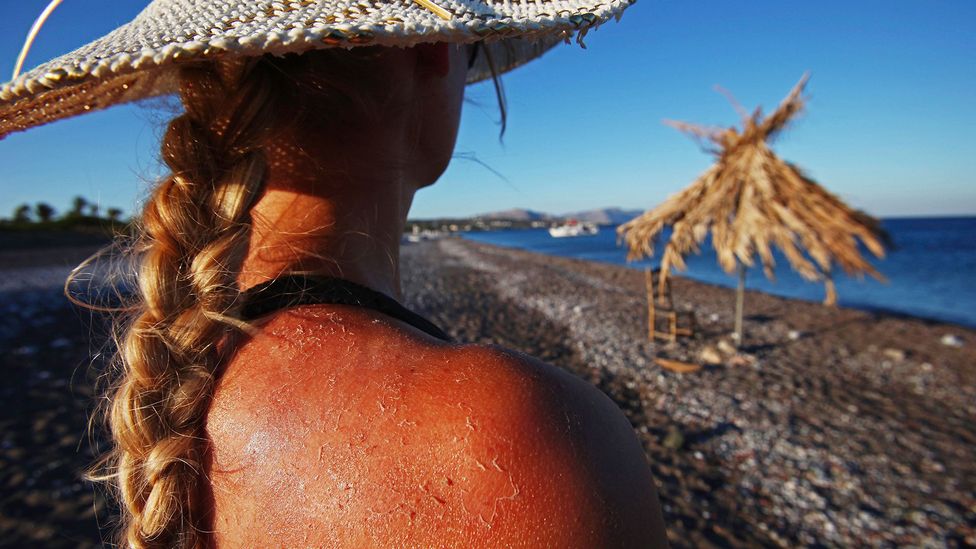 Both UVA and UVB damage the skin — but nothing is as damaging as UVC (Credit: Getty Images)

There is also a third type: UVC. This relatively obscure part of the spectrum consists of a shorter, more energetic wavelength of light. It is particularly good at destroying genetic material – whether in humans or viral particles. Luckily, most of us are unlikely to have ever encountered any. That’s because it’s filtered out by ozone in the atmosphere long before it reaches our fragile skin.

Or that was the case, at least, until scientists discovered that they could harness UVC to kill microorganisms. Since the finding in 1878, artificially produced UVC has become a staple method of sterilisation – one used in hospitals, airplanes, offices, and factories every day. Crucially, it’s also fundamental to the process of sanitising drinking water; some parasites are resistant to chemical disinfectants such as chlorine, so it provides a failsafe.

Though there hasn’t been any research looking at how UVC affects Covid-19 specifically, studies have shown that it can be used against other coronaviruses, such as Sars. The radiation warps the structure of their genetic material and prevents the viral particles from making more copies of themselves.

However, it's not quite as good as we might have hoped. In a recent study – which looked at whether UVC could be used to disinfect PPE – the authors found that, while it is possible to kill the virus this way, in one experiment it needed the highest exposure out of hundreds of viruses that have been looked at so far. The amount of ultraviolet required varied widely, depending on factors such as the shape and type of material the virus was on.

Nevertheless, a concentrated form of UVC is now on the front line in the fight against Covid-19. In China, whole buses are being lit up by the ghostly blue light each night, while squat, UVC-emitting robots have been cleaning floors in hospitals. Banks have even been using the light to disinfect their money. 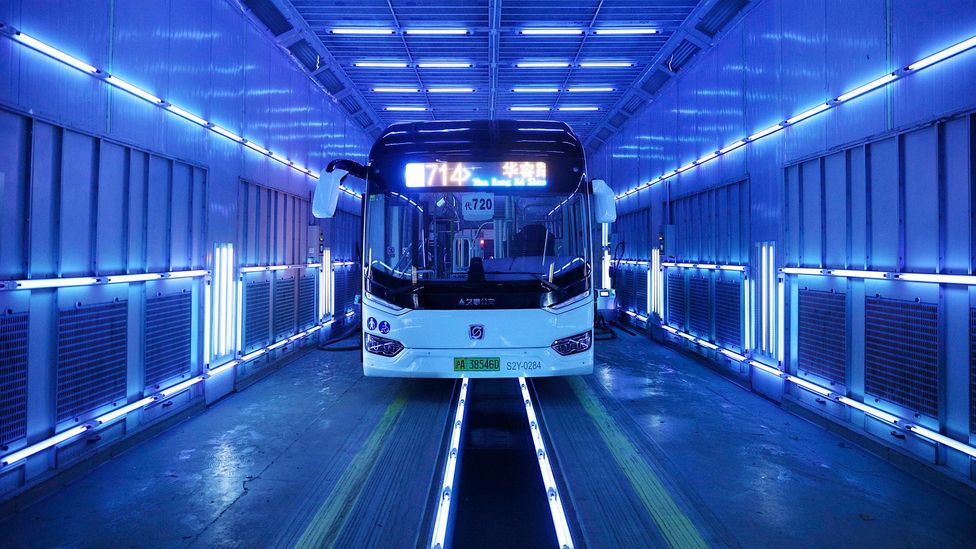 At the same time, UV equipment suppliers have reported record sales, with many urgently stepping up production to fill their orders. Arnold says UV Light Technology has run out of all of its equipment already.

But there’s a major caveat.

“UVC is really nasty stuff – you shouldn't be exposed to it,” says Arnold. “It can take hours to get sunburn from UVB, but with UVC it takes seconds. If your eyes are exposed… you know that gritty feeling you get if you look at the sun? It’s like that times 10, just after a few seconds.”

To use UVC safely, you need specialist equipment and training. The World Health Organization (WHO) has issued a stern warning against people using UV light to sterilise their hands or any other part of their skin.

During the White House briefing on Thursday, the US president suggested that UV light could be brought inside the body to kill the coronavirus. It's not clear which type he meant, but given what we know about the damage UVA, UVB and UVC can do to genetic material and living tissues, this would be a bad idea – let alone impractical, since Covid-19 mostly infects the lungs.

Recently, scientists have discovered a promising new type of UVC which is less dangerous to handle, and still lethal to viruses and bacteria. Far-UVC has a shorter wavelength than regular UVC, and so far, experiments with human skin cells in the lab have shown that it doesn’t damage their DNA (more research is needed to be sure).

On the other hand, bacteria and viruses don’t come off as well, because they are small enough for the light to reach. One study found that it could prevent mouse wounds from becoming infected with the superbug MRSA, while another found that it could kill flu viruses suspended in the air.

However, the vast majority of the UVC lamps on the market don’t use far-UVC yet – and again, it hasn’t been tested in actual humans, just on our cells in petri dishes and other animals. So this type of radiation probably won’t help you during the current pandemic either.

Would UVA or UVB work instead? And if so, does this mean you can disinfect things by leaving them out in the sun?

The short answer: possibly – but you wouldn’t want to rely on it.

In the developing world, sunlight is already a popular means of sterilising water – it’s even recommended by the World Health Organisation (WHO). The technique involves pouring the water into a clear glass or plastic bottle, and leaving it out in the sun for six hours. It’s thought to work because the UVA in sunlight reacts with dissolved oxygen to produce unstable molecules such as hydrogen peroxide, the active ingredient in many household disinfectants, which can damage pathogens.

Without water, sunlight will still help to disinfect surfaces – but it may take longer than you’d think.

Scientists have found that flu cases in Brazil tend to go up during the burning season, when smoke dilutes UV (Credit: Getty Images)

The problem is we don’t know how long, because it’s still too soon for many studies to have been done on the new coronavirus.

Just before President Trump's comments about UV light on Thursday, William Bryan, a science and technology advisor at the Department of Homeland Security, presented some results from a study they have conducted into whether sunlight can kill the pathogen.

They found that when the virus was suspended in the air, its half-life – the amount of time it takes to deactivate half the particles in a particular sample – in “ordinary conditions” (20% humidity and a temperature of 70-75F (21.1-23.9C)) was around an hour. When they added sunlight into the equation, that shrank to just one and a half minutes.

However, the study results have so far only been alluded to in the briefing and a leaked report – they have not been officially published or peer-reviewed. It's also not clear what wavelength or intensity of light they used in the study. Until we have more details and the results have been properly scrutinised, it’s important to view them with caution.

In the meantime, other viruses can provide some clues.

Research on Sars – a close relative of Covid-19 – found that exposing the virus to UVA for 15 minutes had no impact on how infectious it was. However, the study didn’t look at longer exposures, or UVB, which is known to be more damaging to genetic material.

Then there’s the flu. When scientists analysed hospital admission records in Brazil, they found that the number of flu cases tended to go up during the burning season, when there is more smoke in the atmosphere from forest fires and the UV in sunlight is diluted.

Another study found that the longer flu particles were exposed to sunlight for – and the more concentrated it was – the less likely they were to remain infectious. Alas, the study looked at flu suspended in the air, rather than dried onto objects.

No one knows how long it takes to deactivate Covid-19 with sunlight, or what strength is needed

All this means that using sunlight to disinfect surfaces is extremely problematic.

First of all, no one knows how long it takes to deactivate Covid-19 with sunlight, or what strength is needed. And even if they did, the amount of UV in sunlight varies depending on the time of day, the weather, the season, and where in the world you live – especially which latitude – so this wouldn’t be a reliable way to kill the virus.

Finally, it goes without saying that disinfecting your skin with any kind of UV will lead to damage, and increase your risk of skin cancer.

And once the virus is inside your body, no amount of UV is going to have any impact on whether you’re infected.

This story was originally published in March 2020 but was updated 24 April 2020 with new information and to reflect the latest research.

As an award-winning science site, BBC Future is committed to bringing you evidence-based analysis and myth-busting stories around the new coronavirus. You can read more of our Covid-19 coverage here.