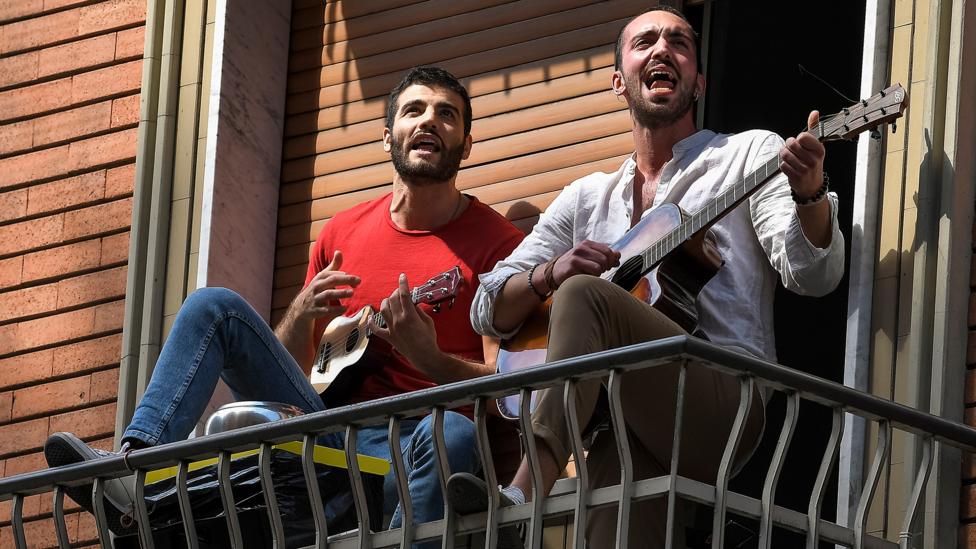 By Sarah Keating 19th May 2020
Whether you have the voice of a songbird or sound like some ball-bearings in a blender, singing can have some remarkably positive effects.
D

During a morning shift change at St Marcy Mercy Livonia Hospital in Detroit, Michigan, the medical staff were feeling weary. Their surgical floor had been converted into a department for coronavirus patients and spirits were low.

Nurse Lori Marie Key was asked if she would sing Amazing Grace for her colleagues during the morning briefing. So she did. As her voice soared, one of her fellow nurses filmed her, put it online and it went viral.

There was something about the solidarity and togetherness of that moment that personifies a lot about the power of song. But it wasn’t just something abstract and ethereal happening, there are scientific reasons for why singing feels good.

• How happy music can make you do bad things
• Why music has the power to make us cry
• What will music be like in 20 years?

Perhaps that’s why, as most of the world went into lockdown to contain the Covid-19 pandemic, there were countless examples of people turning to song as solace. Italians belted arias from their balconies, famous musicians performed mini concerts from their living rooms and choirs took their sessions online to become virtual virtuosos. 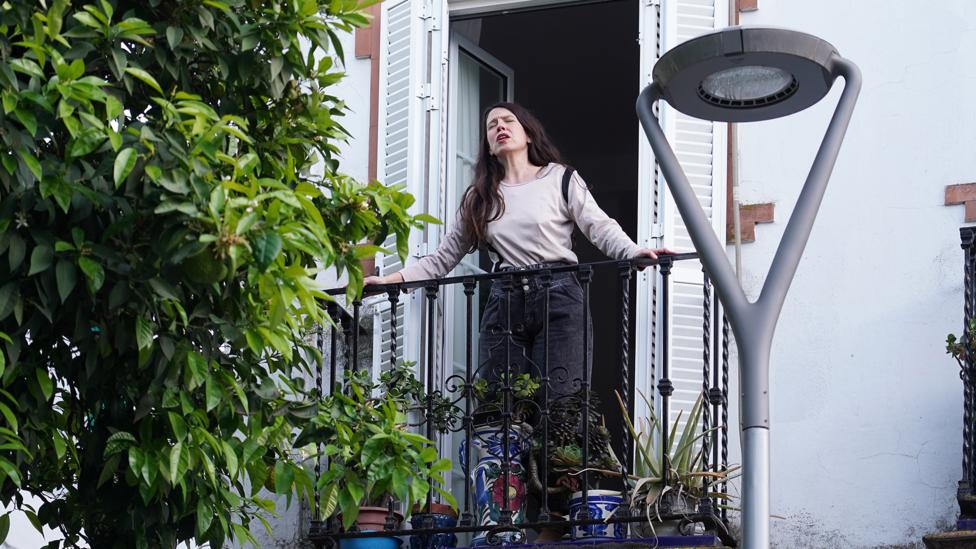 Networks of neurons on both sides of our brain become activated when we sing (Credit: Getty Images)

When we sing, large parts of our brain “light up” with activity, says Sarah Wilson, a clinical neuropsychologist and head of the School of Psychological Sciences at the University of Melbourne. She led a study which looked at how the brain reacts when we sing by giving volunteers of varying vocal ability MRI scans as they warbled.

“There is a singing network in the brain [which is] quite broadly distributed,” Wilson says. When we speak, the hemisphere of the brain dealing with language lights up, as we might expect. When we sing, however, both sides of the brain spark into life.

“We also see involvement of the emotion networks of the brain,” adds Wilson. Regions that control the movements we need to produce sounds and articulation also light up.

The physical exertion involved in singing – filling of our lungs, the firm control of our vocal chords, the movements of our mouth and body – is among the reasons why it can boost our mood. Singing is an aerobic exercise which sees the release of endorphins, the brain’s ‘feel-good’ chemicals, says Baishali Mukherjee, the Southeast Asia regional liason for the World Federation of Music Therapy.

“Endorphins [are] related to an overall lifted feeling of happiness, it gives a feeling of euphoria so it’s all associated with a reduction in stress,” she says. “In any situation whether it is under stress or [with] any physical ailments, illness, psychological deprivation, music has the potential to affect our body and mind.”

And not surprisingly, being in a better mood has all sorts of benefits says Mukherjee. “When your mood is up, you [strengthen] your immune system…, you respond to stress factors in a more positive way [and] enhance sleep patterns.”

It also engages what is potentially the body’s greatest stress-reliever – breathing.

Anyone who has ever experienced a panic attack will be all too familiar with the terrifying feeling of not being able to catch your breath. This short, shallow breathing leads to a decrease in carbon dioxide in the bloodstream as you expel more of the gas than your cells make. This imbalance in carbon dioxide can cause dizziness and anxiety among other symptoms. Conversely, deep or diaphragmatic breathing allows a full oxygen-exchange to occur in the lung’s cells, activating the body’s parasympathetic nervous system which then slows the heart rate and dilates the blood vessels which lowers your blood pressure.

While deep breathing has long been used in therapeutic practices, the neurophysiology behind it has only recently been explored. In a recent study, researchers found that focusing on controlling your rate of breathing – a key skill in singing – activates parts of the brain that are linked to emotion, attention and body awareness.

But do you have to be any good?

Well, yes and no. In Sarah Wilson’s study at the University of Melbourne, singers were grouped by ability – professional singers, everyday (or shower) singers and those who didn’t think they were any good.

When the non-singers were scanned, the researchers found they were only using their language brain network to sing, and didn’t venture into their singing networks at all. 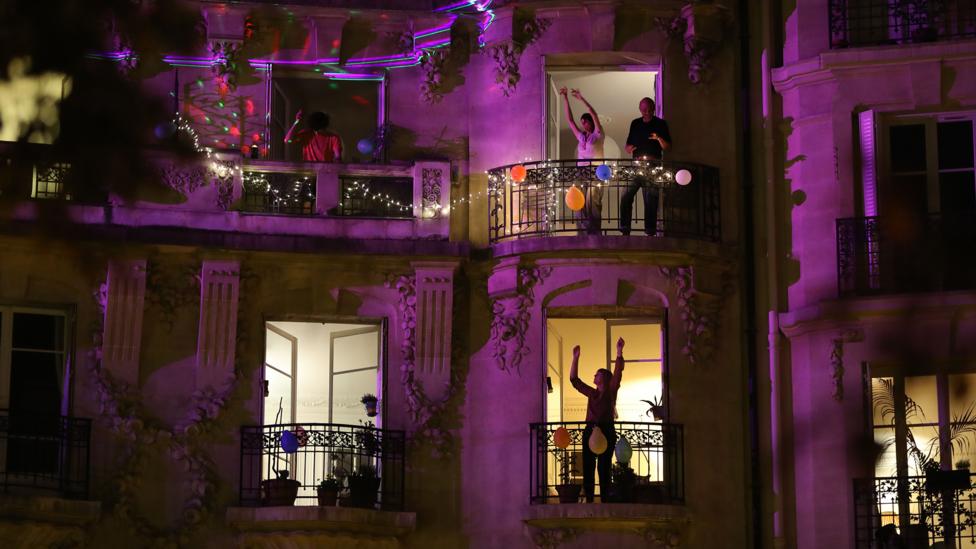 Life during lockdown has led people around the world to find ways of coming together through music and singing (Credit: Getty Images)

But when the everyday or “shower” singers and professional singers were scanned “we saw increasing differentiation between the singing and the language networks of the brain”, Wilson says. So, the better you are at singing, the more pronounced your specialised singing network.

“What we are doing when we practise and engage in singing is developing this specialised network, which gives us that physiological reward hit, the chills, the dopamine release, the sense of feeling good,” says Wilson. The more we sing, the more we develop this network in our brains, and the better it feels.

While the act of singing in itself activates several things in our bodies and brains, when we engage in it with others, it adds another layer to this.

Wilson’s team is about to embark on a new study looking at how music creates a feeling of unity. “The term is kama muta,” Wilson says, referring to a Sanskrit phrase meaning “moved by love”. It’s the goosebumps you get when hearing a beautiful song, or the tears that roll down your face when you hold your newborn baby for the first time. In the context of music, this study will look at “how it brings together this sense of communal sharing”.

Song or music is able to capture something that goes beyond what we would normally be able to articulate in our rational, logical minds – Jerome Lewis

“There is evidence that, in general, singing in a group enhances our sense of empathy and social connection,” says Wilson. “We see this at football clubs… (and) people [singing] in congregations at church. It’s a community-building activity because we’re united in our voice.”

As well as endorphins racing through your body, another hormone released when we sing is oxytocin. Mukherjee explains that oxytocin has a powerful effect in enhancing a feeling of connectedness between people.

“[It] is often related to breastfeeding as well as sexual activity,” she says. “There is also a very strong area of research that supports that this particular neuropeptide….is believed to play a role in increasing bonds and trust between people.” (Although some researchers doubt oxytocin’s role in trust, more recent research has shown it can influence how much value we place on information from others.)

This power to bond people together makes singing particularly potent at a time when an unprecedented global situation has left many of us with glimpses of unfamiliar and uneasy emotions.

“Song or music is able to capture something that goes beyond what we would normally be able to articulate in our rational, logical minds,” says Jerome Lewis, an anthropologist at University College London. “It provides an opportunity for exploring joyful, difficult, sad – all sorts of different emotional spaces which are sometimes difficult to access through a literal, logical, sequential series of words that build up.” 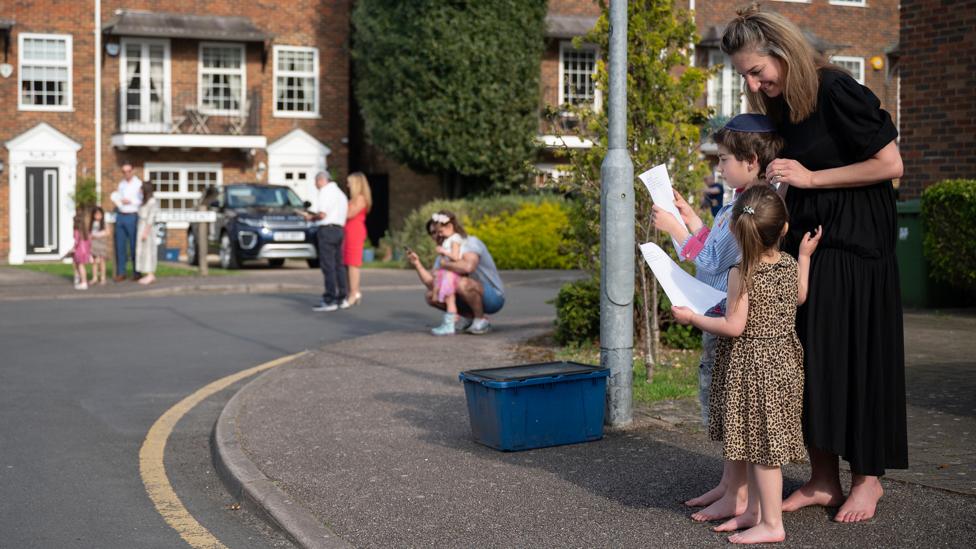 Singing can bring a sense of unity and solidarity that few other activities can provide (Credit: Getty Images)

Lewis has spent many years studying remote hunter-gatherer tribes in the Central Africa Republic – specifically the BaYaka people. Through his work, he has examined how BaYaka use song not as a performative act but one of deep communication.

There are no leaders in the BaYaka community, no frontmen or women. The singing they do comes from a place of connectedness that mirrors the lack of social hierarchy.

Without any organisation, their singing is dense with polyphony, yet each member must create their own harmony and find their place in the song. “Learning to do this when singing cultivates a particular sense of personal autonomy,” says Lewis. “One that is not selfish or self-obsessed, but is keenly aware of what others are doing.

“The type of singing that was done in Milan from balcony to balcony, was so moving and beautiful because it was so egalitarian. By sharing that emotion with all the other people in the flats around them there was a sense of community which was beyond any hierarchy… all voices are equal.”

Many people find their voice in a choir and recent events have seen some groups organise online choir sessions, making this kind of group singing accessible to even the most remote singing enthusiast. 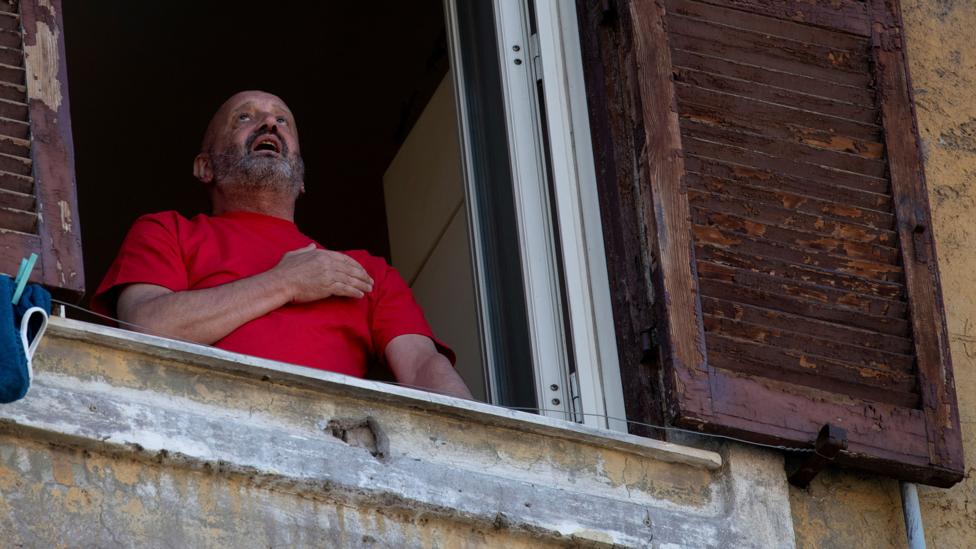 The raw emotion associated with singing is thought to hark back to something more primal in our way of communicating (Credit: Getty Images)

One such group is the Australia-based Pub Choir which, as the name suggests, is an open group that, before Covid-19 emerged, would gather in pubs and learn a song in simple three-part harmony. While the sessions were already extremely popular prior to the pandemic lockdown, often attracting up to 1,500 people, turning Pub Choir into the virtual Couch Choir has seen up to 6,000 people across 45 countries take part at any one time. Like the pub version, there is no membership and no audition process. You simply learn a part of the chosen song and film yourself singing along.

“It’s not about musical perfection, it’s about collaboration,” says founder and director, Astrid Jorgensen. “The numbers that we’re dealing with are so large if you miss a note someone else will have got it,” she laughs.

And the effect, she says, has been remarkable. “When people submit their video they can leave a message,” she says. “It’s almost like a confessional. Pretty much everybody leaves such a heartfelt comment.”

She recalls one message they got from an emergency room doctor in New York who had just finished a 14-hour-shift and was feeling particularly despondent. Looking for some reprieve, the doctor decided to sing. “They thought they’d just sit with their voice for five minutes and [said] it made everything feel a little bit easier,” Jorgensen says.

Watching the videos that people send in gives “an overwhelming sense of hopefulness” she adds. “People feeling a little bit silly singing at home alone but then smiling and hoping that this creates a beautiful piece of art. It’s very joyful.” 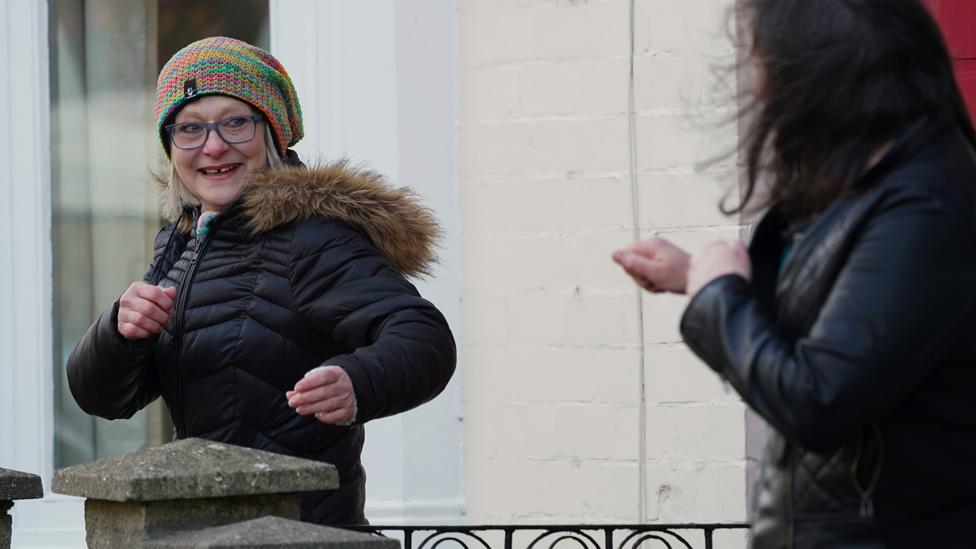 Enjoying music can help to relieve stress and improve your mood by encouraging the release of 'feel-good' chemicals in the brain (Credit: Getty Images)

Beyond simple joy, Sarah Wilson argues that singing is “fundamental to our biological makeup” and believes that it may have even preceded speech.

“When we study singing, we don’t just learn about singing,” she says. “We learn about things that make us uniquely human and gain insights into the way the brain develops, why it developed the way it has, how it develops and why we’ve held onto music.”

Like the BaYaka tribes of the Central African Republic, singing together is a primal way to communicate – one without hierarchy or the complexities of speech in modern life.

“We are in a pandemic and what do we do?” says Wilson. “We go back to these roots of [the] innate things that bring us connection and strength. What better way to do this than to sing across balconies.”