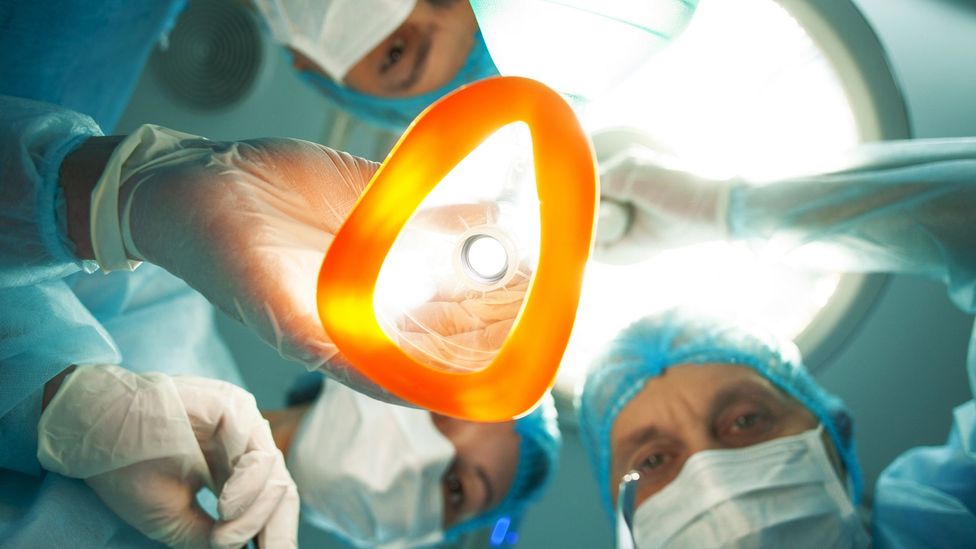 By Richard Hollingham 25th June 2020
This feature is currently in beta testing and uses a computer-generated synthetic voice. There may be some errors, for example in pronunciation, sentiment and tone.
In Victorian times, surgery was painful, brutal – and often a death sentence. But the discovery of drugs which put the patient into blissful sleep was a step towards safer operations.
F

From first cut to severed limb dropping into a box of bloodied sawdust, surgeon Robert Liston could remove a leg in 25 seconds. His operations at University College Hospital in central London in the early 1840s were notorious for their speed, intensity and success. The chance of dying from a Liston amputation was around one in six – much better than the average Victorian surgeon.

The speed of the procedure had its advantages. With no pain-relief available, it shortened the almost unimaginably horrific trauma of surgery. The screaming patient would typically be held down on a wooden bench by "dressers", who would also assist with ligatures, knives and dressings.

Although no-one realised it at the time, lightning-fast operations also minimised the exposure of tissue to microbes and infection.

The downside was that the knife sometimes moved so quickly that accidents occurred. In one instance, Liston cut through a dresser’s fingers. The patient later died of infection, so did the assistant. An observer died of shock. It was probably the only operation in history with 300% mortality.

In the early 19th Century, even the most knife-happy surgeons like Liston only carried out operations as a last resort. Any patient with a compound fracture of the leg or arm – where the bone penetrates the skin – for instance, had little choice but amputation. In a time before any understanding of what caused infection, the alternative was gangrene, blood poisoning and death.

“It’s really important to think about the emotional impact of performing surgery,” says Sally Frampton, a medical historian at the University of Oxford. “It was a really harrowing experience for both the patient and the surgeon. Can you imagine someone having to be forcibly held down while you operate upon them?”

One young London surgical student, John Keats, found operations so disturbing he abandoned the profession to become a poet.

Without anaesthesia, patients had to be held down as they were subjected to agonising pain (Credit: Getty Images)

As surgeons developed new procedures and operations became more involved, the race was on to come up with a means of relieving pain. “Often people would not have operations until they were absolutely at death's door or living in excruciating pain,” says Frampton.

Some attempts were made to hypnotise patients to put them to sleep, but with little success. In 1845, dentist Horace Wells gave a public demonstration in Boston, Massachusetts, using nitrous oxide gas during a tooth extraction. The operation was a disaster. A witness described the patient screaming with pain, “and the spectators laughed and hissed”.

It was another dentist, William Morton, who discovered a solution a few months later: ether – synthesised from a pungent mixture of sulphuric acid and alcohol. In October 1846, again, in Boston (having almost certainly tried it in private a few days’ earlier to avoid a repeat of the nitrous oxide debacle), he used ether to put a patient to sleep before successfully removing one of their teeth.

Within weeks, Liston adopted the technique in London. The patient was a butler, Frederick Churchill, who caused much hilarity in the operating theatre when he woke after the amputation and declared: “When are you going to begin?”

But ether had its drawbacks. Not only was it unpleasant to breathe – often leaving patients coughing and even vomiting – it was highly explosive. The combination of Victorian gas lighting and the anaesthetic gas was potentially lethal. There were also concerns in some quarters of its pedigree. Not only was it discovered in America but, worse, by a dentist.

Experiments by Scottish midwifery professor James Simpson – mostly on himself and his friends – yielded an alternative: a sweet-smelling gas called chloroform. A few drops on a handkerchief soon became the anaesthetic of choice for the modern surgeon. Until unconscious patients started dying from its use.

The first recorded victim was 15-year-old Hannah Greener of Newcastle in north-east England. On 28 January 1848, she was sent to surgeon Thomas Meggison for the removal of a toenail. After dripping some chloroform on a cloth and holding it over her face, she passed out. He began to slice at her toe. A few minutes later, she stopped breathing. Meggison tried to give her some brandy to revive her but it was too late: she was dead.

The problem with chloroform was that no-one had figured out the correct dose. If anything, anaesthetics were increasing the chances of patients dying, and not all surgeons were keen on using them. 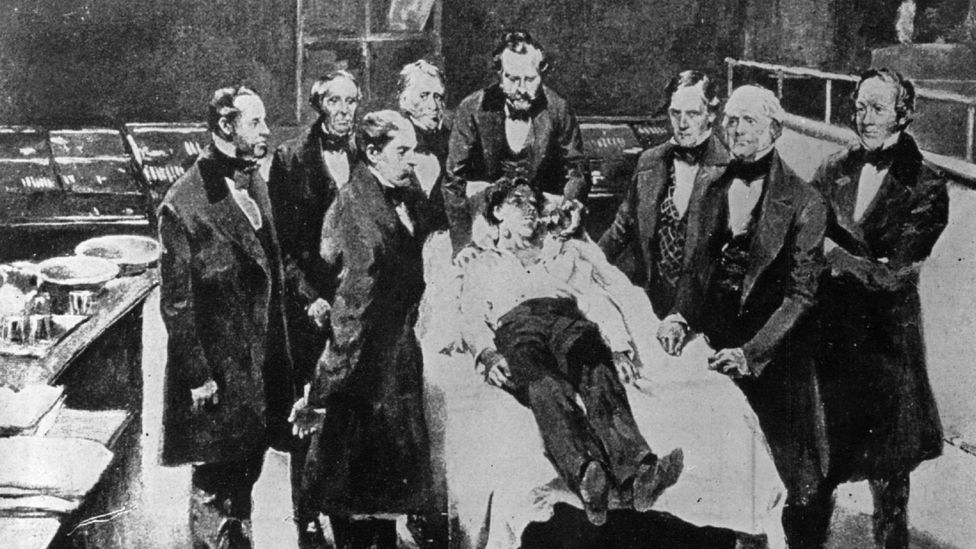 As surgeons came up with more ambitious procedures, there was a pressing need for a reliable method of sending patients to sleep (Credit: Getty Images)

“In the 1850s, there's a lot of discussion about the risks and benefits of anaesthetics,” says Stephanie Snow, an historian of medicine at the University of Manchester and author of books on the history of anaesthesia. “Is it appropriate for a surgeon to give chloroform to a patient when it might be riskier than the operation itself, leading them to die from it?”

Snow is an authority on Victorian public health pioneer John Snow, who she discovered was her father-in-law’s great, great, great uncle. By carrying out experiments on animals, (John) Snow figured-out how to administer chloroform to avoid crossing the fine line between unconsciousness and death. He transformed anaesthesia from an art into a science.

Nevertheless, there was still some question over whether pain was necessary for surgical success. During the Crimean War (1853-1856), the British army’s head of medicine specifically banned the use of chloroform in battlefield surgery. One military surgeon remarked that he preferred to hear “the lusty screams” of soldiers as they went under the knife. It was a sign, he said, they were fighting for survival.

“Pain was regarded as a vital function, so if you operated on someone, pain would be like a stimulant to the body to keep going through the stress of the operation,” says Snow. “But [John] Snow was very forceful in arguing that extreme pain was risky and anaesthetic protected patients from that risk.”

The surgeon was so confident in his science that he gave Queen Victoria chloroform during the birth of her eighth child in 1853. An editorial in the Lancet medical journal, however, chastised him for putting her life at risk through the “poisonous action” of the anaesthetic.

“Snow's argument was that the pain of childbirth was equal to the pain of surgery,” says Snow. “And therefore mothers-to-be should be given the choice as to whether or not they were able to have pain relief.”

By 1860, anaesthesia was in common use. Patients were less likely to refuse surgery and surgeons were able to take longer with procedures and try new and daring operations. However, with no understanding of the causes of disease, wounds often became infected and the patients died. It wasn’t until antiseptic techniques were developed in the mid-1860s that surgery become safer. 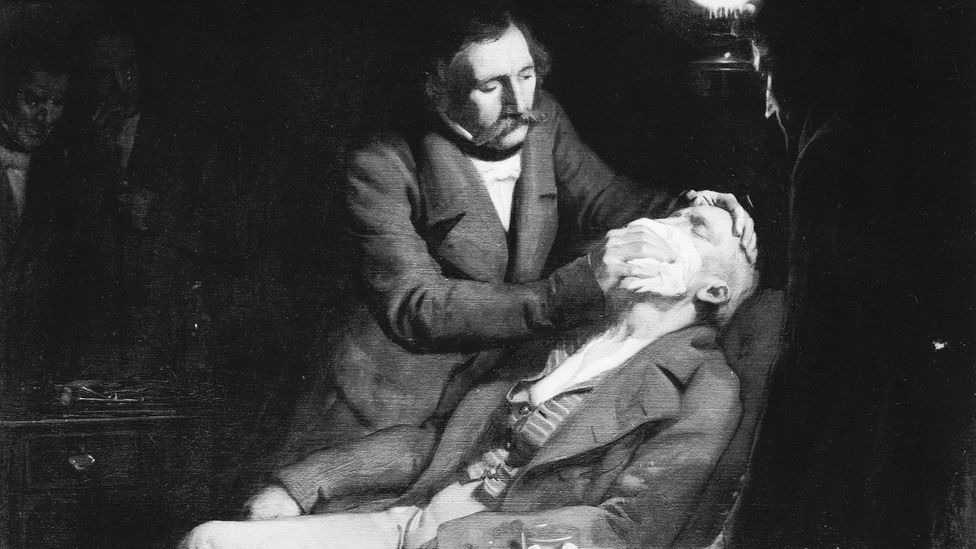 In 1846, a compound synthesised from a potent mixture of sulphuric acid and alcohol was used to put a patient to sleep before removing a tooth (Credit: Getty Images)

By the beginning of the 20th Century, the first local anaesthetics – based on cocaine – were in use and anaesthetists had begun to emerge as a separate profession. But ether and chloroform, sometimes used in combination, were still the only general anaesthetics.

In the 1930s, chloroform fell out of favour – successive studies showed it was not as safe as ether. But it took a world war to develop the drugs and gases used in operating theatres today, which owe their existence to the development of nuclear weapons.

“The anaesthetic I was using today is still a type of ether,” says William Harrop-Griffiths, chair of the Royal College of Anaesthetists Clinical Quality and Research Board. Unlike the ether used as earlier anaesthetics, this modern version has had fluoride chemically added to it. “If you fluoridate ether, it continues to be effective as an anaesthetic, without being flammable or explosive.”

Out of something that killed tens of thousands, came drugs that saved hundreds of thousands – William Harrop-Griffiths

When I speak to him in the early afternoon, Harrop-Griffiths has already anaesthetised two patients that day – administering a general anaesthetic for a child undergoing nose surgery and an epidural (local anaesthetic) for a caesarean section.

“Nuclear bombs needed uranium hexafluoride and the sudden advance during the Second World War of fluoridation chemistry allowed people to produce very effective, non-flammable and safer anaesthetics,” he says. “Out of something that killed tens of thousands, came drugs that saved hundreds of thousands.”

It’s not only innovations in anaesthetic chemicals that have improved the safety of putting people to sleep during surgery. New ways to maintain patients’ breathing by using tubes directly to their lungs, and equipment to track their wellbeing have also been developed.

“If I had to pick one thing that makes it safer now than it was before, that’s our capacity to monitor the physiology of a patient,” says Harrop-Griffiths. 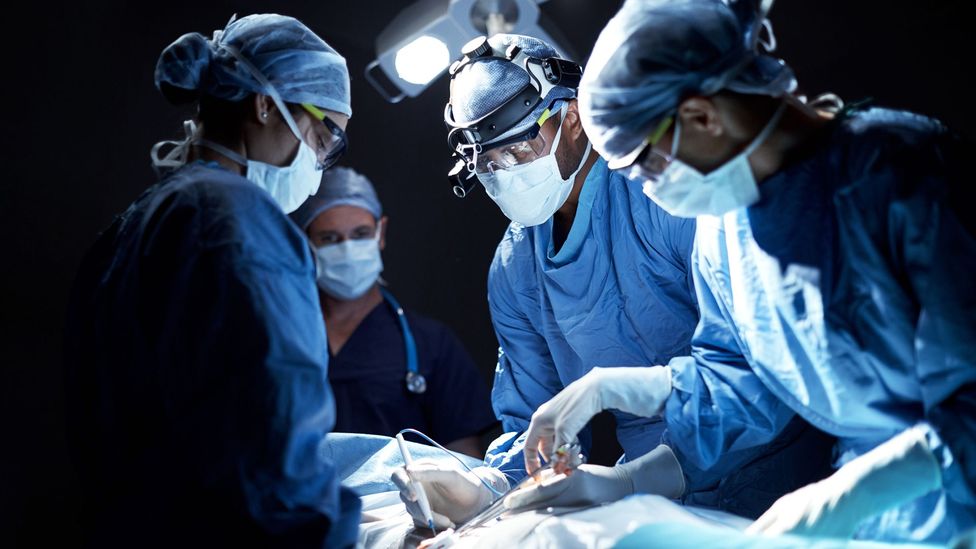 The development of anaesthesia meant surgeries could be carried out at a slower pace, and more complicated procedures could be undertaken (Credit: Getty Images)

The equipment used by today’s anaesthetists enables them to monitor pulse, blood pressure, oxygen and – since the 1970s – carbon dioxide.

“The human being is very poorly designed, and the oesophagus is alongside the trachea,” explains Harrop-Griffiths. “If you put a tube into the trachea, the patient will live, if you put it two centimetres away in the oesophagus they will die – measuring the carbon dioxide output of the lungs is incredibly important to know you’re ventilating the patient's lungs.”

Even today, anaesthetics are not entirely risk-free. People occasionally wake-up on the operating table, general anaesthetics can leave you feeling drowsy for days and local anaesthetics involve painful injections. (Read more about what happens when anaesthetics fail.)

In the UK, the chances of dying during planned surgery are about 1 in 100,000. Considerably better odds than if you were the next patient on Robert Liston’s operating list.

Richard Hollingham is a science and space journalist, feature writer for BBC Future and the author of Blood and Guts, A History of Surgery.