The government has outlined an overhaul of the UK's foreign and defence policies.

Announcements included reversing plans to reduce its stockpile of nuclear weapons and a shift in focus to Asia, alongside increases in defence spending announced in November.

We have been checking some of the claims made about it in Parliament.

Boris Johnson: "This is the biggest investment in our armed forces since the Cold War"

Looking back at figures since 1990 - seen by many as the end of the Cold War, with the Berlin Wall coming down in November 1989 - it is clear military spending has fallen considerably.

This chart shows it as a proportion of gross domestic product (GDP), which is the value of everything produced by the economy in any particular year. 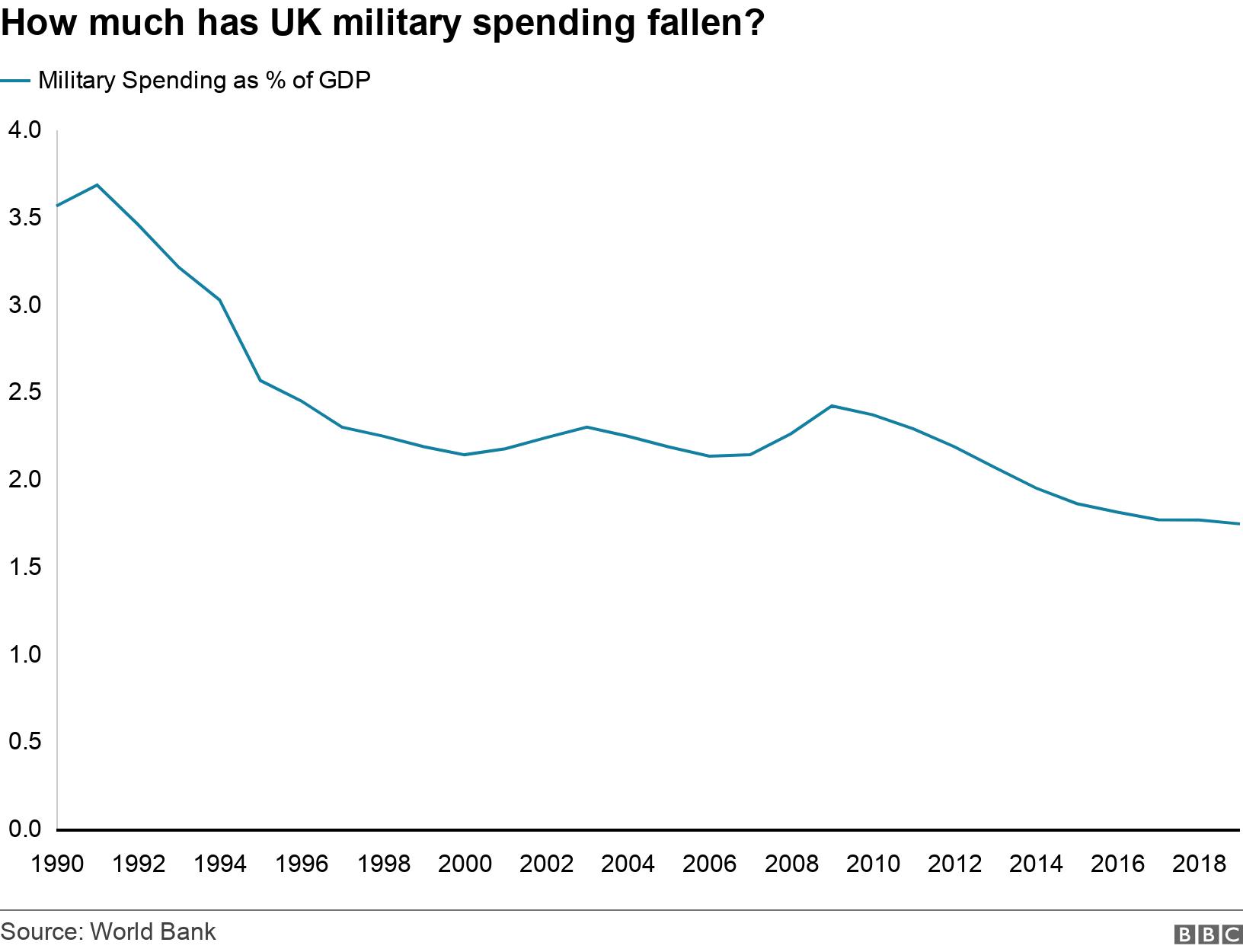 The boost announced in November means by 2024-25, defence spending will be £7bn a year higher than it would have been under previous plans.

The government has previously phrased this claim differently, though, calling the boost the "biggest sustained increase in 30 years".

And as defence spending has not increased for more than three years in a row since 1990, this will probably turn out to be true.

Keir Starmer: "He (the PM) said, before the last election 'we will not be cutting our armed forces in any form'"

The Labour leader made this claim about Boris Johnson following the government announcement of a cut to the size of the Army (from 76,500 full-time, trained soldiers now to 72,500 by 2025).

He's right - Mr Johnson did make this comment at the launch of the Conservative manifesto in November 2019.

However, this promise wasn't in the 2019 Conservative manifesto.

What is happening to the size of the Army?

Boris Johnson: "This country is the biggest European donor to Yemen and has given £1bn over the last six years, £87m this year"

The prime minister was responding to criticism - including from his own MPs - of the government's decision to temporarily cut the international aid budget, from 0.7% to 0.5% of gross national income (GNI).

He's right - the UK has given more to Yemen than any other European country over the past few years.

In 2020, the UN said the UK was the third biggest global donor, behind the United States and Saudi Arabia and ahead of Germany and the European Commission.

But UK aid to Yemen, which is currently experiencing the world's worst humanitarian crisis, is falling sharply.

And at a recent donor conference, again according to the UN, the UK pledged $123m (£87m) - just over half of last year's figure - while Germany promised $245m.

Keir Starmer: "In the last decade of Conservative governments, defence spending and pay for the armed forces both fell in real terms"

Between 2010 and 2017, annual defence spending fell by £6.6bn in real terms - after adjusting for rising prices - compared with the 2009-10 budget, according to the Institute for Fiscal Studies.

You can read more about funding and army numbers here.

The position on army pay is less clear - there have been various freezes and caps since 2010 but also exceptions for lower paid personnel and some allowances based on factors such as specialist skills.

But the Armed Forces' Pay Review Body says: "Since 2010-11, the relative position of most armed-forces pay ranges has fallen."

Emma Lewell-Buck: "Can [the prime minister] explain how breaching Article Six of the Nuclear Non-Proliferation treaty fits with his commitment to international law?"

This UN treaty (the NPT), which came into force in 1970, recognises five countries, including the UK, as nuclear-armed states - and Article Six commits them "to pursue negotiations in good faith on effective measures relating to cessation of the nuclear arms race at an early date and to nuclear disarmament".

But while the government's plan to raise its cap on its number of nuclear warheads, to 260, reverses recent efforts by the UK to reduce the size of its nuclear arsenal, it is unclear whether this breaks this particular part of the treaty.

"No - not an NPT violation, at least not in the letter of international law," Mark Fitzpatrick, from the International Institute of Strategic Studies, says.

"Although, one could argue that it violates the spirit of the NPT."

Much of the debate comes down to interpretation, according to Hans Kristensen, a nuclear weapons expert at the Federation of American Scientists.

Some say any country adding to its arsenal violates the article, others say the only obligation is to pursue negotiations towards the goal of disarmament.

In 2015, the UK said it was committed to Article Six obligations by highlighting how it was reducing its nuclear arsenal - and it is now arguing it remains in compliance after announcing plans to reverse this.

A Ministry of Defence spokesperson said: "Maintaining and renewing elements of the UK's nuclear deterrent capability is fully consistent with our international legal obligations, including those under Article Six of the Non-Proliferation treaty".

This piece was published on 16 March and has been updated to include the subsequent announcement on 22 March of the cut to the size of the Army and a claim relating to this.