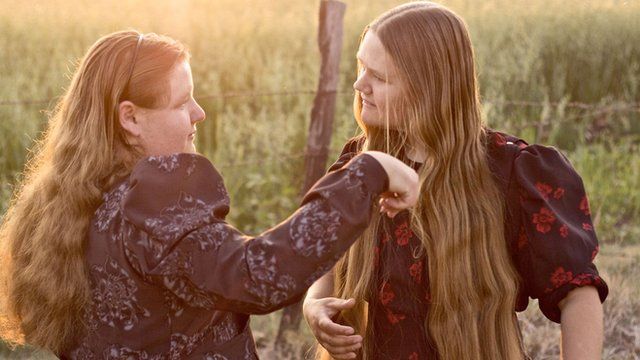 The first time Mexican photographer Eunice Adorno saw the flower girls, they were standing in the shadow of a tree, wearing shiny tights, staring directly at her.

Despite being persecuted by both Church and state organisations in the early 20th Century, Mennonite communities have grown worldwide. In the 21st Century, Mennonites still live as though they were in the 19th, with their beliefs in non-violence, simplicity of life, and the message of Christ.

"When I walked up to them, there was a mysterious silence," Adorno said. "When I talked to them, their sole reply was an enigmatic glance. From that moment on, I felt an immense curiosity for them."

This was the beginning of a project that spanned the course of several years, culminating in the book, Las Mujeres Flores, published this month by La Fabrica. The book is an intimate portrayal of women within the isolated Mennonite communities in Nuevo Ideal, in the state of Durango, and La Onda, in Zacatecas, Mexico.

"Gaining their trust was a slow process," Adorno said. "Little by little, they started inviting me to their houses, to have tea with them, to go for a walk."

The community spoke German, which was a barrier for Adorno, who speaks English and Spanish, so she got to know them through the places where they spend their lives and through family photographs they showed her.

"In my own pictures I try to highlight the importance of those details, their objects, the moments and places they cherish."

Go to next video: One man and his 13 dogs