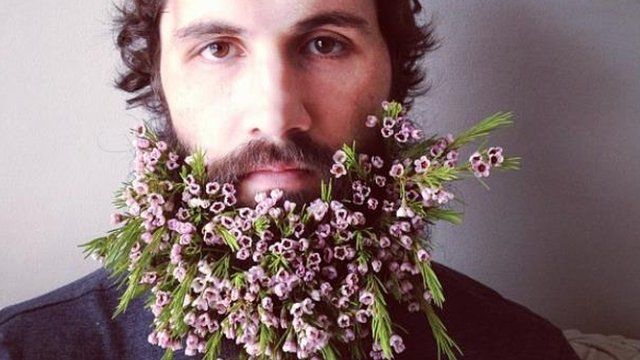 Beards, the ultimate symbol of masculinity, are getting a floral makeover.

Men have been decorating their beards with flowers and plants and then sharing photos of their makeovers online.

The earliest photos of these bearded men are from the seventies, like the one recently posted by Soup.io user Erial. It is a photo of her father, taken by her mother in 1977.

About two years ago, Utah florist and hobby photographer, Sarah Winward, started decorating the beard of her husband, David, with flowers. She took a series of stills and posted them to her blog in January 2013.

Now flower beards are everywhere, and the idea of using your beard as accessory has taken off. The Tumblr "Will It Beard," in which a man tries to decorate his beard with everything from Lego bricks to cheese puffs, got 15,000 likes in a few days.

Sara Gold McBride, a Berkeley PHD student who is studying the connection between facial hair and power in history, describes it as a light-hearted protest against barefaced authority.

The BBC spoke to her and to bearded men to get their perspective.

All our stories are at bbc.com/trending