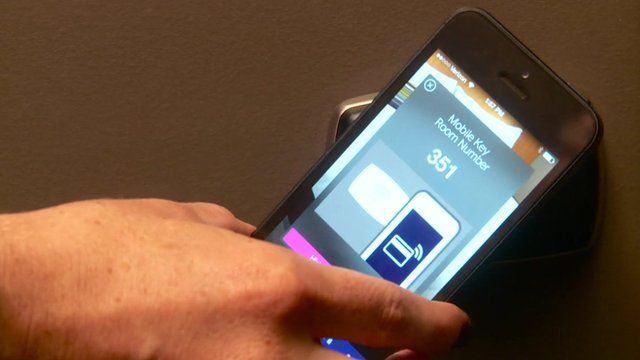 Smartphone app to be used as hotel room keys

The hotel group Starwood is to begin giving hotel guests the option to by-pass check-in and simply use their smartphones to enter their hotel rooms.

The chain has upgraded 30,000 room locks in its nearly 150 hotels to work with the system, which uses Bluetooth technology. Rival chain Hilton is planning a similar move early next year for the 600,000 rooms in its portfolio.

The technology's developer says that it uses its own encrypted secure channel to ensure thieves cannot abuse the innovation.

But one expert had reservations.

"Nothing is 100% secure, and once this technology is in widespread use it will make a very tasty target for hackers," said Prof Alan Woodward from the University of Surrey's department of computing.

"It may be more secure than a standard hotel swipe card lock but use of strong security features such as AES encryption and 'rotating keys' does not mean someone won't find an alternate way in."

Another security researcher also had concerns.

"I don't know why companies think they can do encryption better than a vetted standards body with significant peer review," Joshua Wright told the BBC.

However, he also pointed out that traditional hotel door locks have been defeated with tools as simple as a length or wire.

The BBC was given a demonstration of the new system and spoke to Chris Holdren, Starwood's Senior Vice President, and Dr Selva Selvaratnam, the chief technology officer of HID global, the company which designed the locks' security.