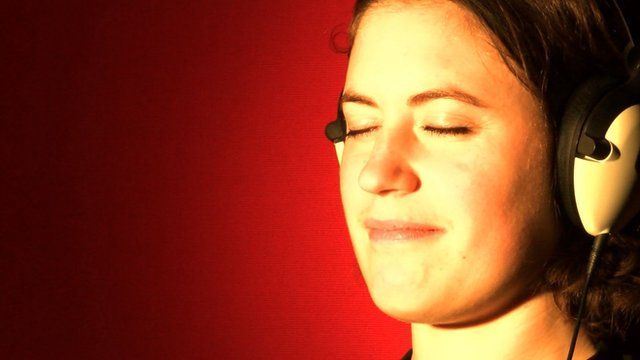 Can this light make you high?

WARNING: The above video contains footage of an extremely rapid flashing light, and should not be viewed by people who have epilepsy.

Meditation is a skill that not everyone can achieve - the ability to block out the world around you and relax, letting everything go.

The makers of the Lucia No.3 light say it acts like something of a fast-track for people wanting to reach that kind of state.

A pulsing, whirring light - aimed at a person's face, with closed eyes - leads to the person seeing a whirring array of colours and shapes.

Vice magazine described the experience as "a bit like doing drugs, but without the comedown and achy jaw".

The light sells for around $25,000 (£16,000), making it unattainable for most people - and so the firm typically sells the machine to holistic therapy businesses.

The light - developed by Dr Dirk Proeckl and Dr Engelbert Winkler - is paired up with a computer programme which generates the light sequence, and pairs it with music.

Due to its extremely rapid flashing, the light is not suitable for people with epilepsy. Also, the inventors warn against use by people who suffer from psychosis.

James Richardson, one of Lucia No.3's distributors, told the BBC that "99%" of the people who used the light enjoyed it.

However in a demonstration for BBC staff, some reported stinging eyes and a twitching sensation that made them feel uncomfortable.

But others, meanwhile, described an out-of-body feeling and deep relaxation.

Go to next video: What is a 'musical hallucination'?