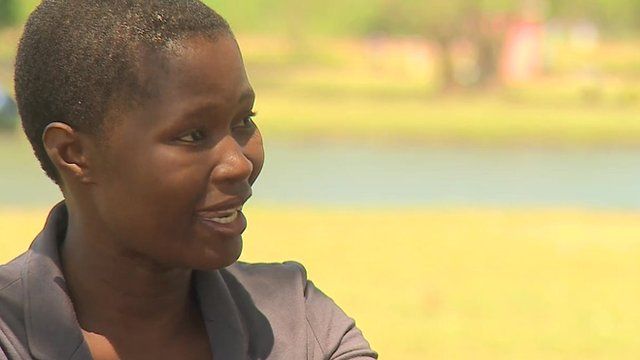 Chipasha Iliamupu was married off by her father at 15 years old in a rural village in Zambia. She was the last of eight children and her mother had died.

Her father received the equivalent of $30 as a bride price from a soldier 20 years Chipasha's senior.

She had a baby girl in her first year and nearly died during childbirth. A chance encounter with an NGO made her realise she could escape her very abusive marriage. After two she years she divorced her husband and returned to school.

She is now 22 years old and in her second year at the University of Zambia. The BBC's Nomsa Maseko heard her story.

This year's season features two weeks of inspirational stories about the BBC's 100 Women and others who are defying stereotypes around the world.

Chipasha spoke to the BBC at the start of the African Union's conference in the Zambian capital Lusaka.

The conference is trying to find a way to end child marriage - a growing problem on the continent, according to the children's charity United Nations Children's Fund (Unicef).

It warns the number of child brides will more than double by 2050 if the current trends - just over one in three African girls marry before the age of 18 - continue.

The charity says the number of child brides in Africa make up more than 40% of the world's total by 2050, if current trends persist.

Africa could overtake South Asia as the region with the most number of child brides, it warns.

Unicef Executive Director Anthony Lake said: "The sheer number of girls affected - and what this means in terms of lost childhoods and shattered futures - underline the urgency of banning the practice of child marriage once and for all.

"Each child bride is an individual tragedy. An increase in their number is intolerable."

The AU is campaigning to raise the age at which it is legal to marry to 18. In about a dozen African countries, it is currently 15.

But Africa's population is growing faster than other that of other continents, meaning the fall is relatively low.