Inside a pro-Russia propaganda machine in Ukraine

A Russian "troll factory" in St Petersburg is working with the self-styled "Donetsk People's Republic" in eastern Ukraine to produce extreme propaganda videos that aim to discredit pro-Ukrainian elements and stir up the conflict in the region, BBC Russian has learned.

A series of fake news videos produced by a group called the Russian Liberation Movement have emerged on YouTube dating from 23 August.

The fighters identify themselves with a confusing array of labels. At times they describe themselves as pro-Russian rebels in Ukraine, as pro-Ukrainian rebels in Russia and even as fighters from so-called Islamic State - even though they have also made videos potentially deeply offensive to Muslims.

In one of these videos, six armed men are draped in a neo-Nazi flag.

They appear to be extreme Russian anti-government nationalists, helping Ukrainians to fight what they describe as "Putin's bloody regime" in Eastern Ukraine and claim they are "turning their gaze towards the Fatherland".

In another video, the Russian Liberation Movement claims responsibility for a suspected arson attack in the Russian city of Rostov, saying it was their "first successful attempt at a terrorist act on Russian soil". The suspected arson attack did indeed happen - one person was killed and more than 100 houses were damaged - but there's no indication that it was linked to political groups or terrorism.

In later videos, the militants explain how to seize a building and use hand grenades. They also hoist a pig's head on to a Koran and send "greetings" to Chechen President Ramzan Kadyrov.

But BBC Russian has discovered a number of similarities between characters and locations in the videos and people and backgrounds in other online films which aim to recruit men to defend the "Donetsk People's Republic" - indicating that the videos are fakes produced by anti-Ukraine fighters operating in the region.

Earlier this year pro-Russian fighters in Donetsk declared a breakaway republic called Malorossiya, although Moscow did not recognise the split.

Western governments accuse Russia of helping the rebels in the region with regular troops and heavy weapons. Despite strong evidence to the contrary, Moscow denies that, while admitting that Russian "volunteers" are helping the rebels.

The Russian Liberation Movement videos were distributed through seven fake accounts on the Russian social network VK. The accounts used false names and photographs of random people as profile pictures.

The accounts were opened just a few days before the material appeared and were largely reposting entertainment content in an effort to look "real".

Although they weren't hugely viral - generally receiving fewer than 1,000 views each - YouTube and other social media sites have since deleted the videos.

A former police investigator, Ivan Borozenny, reinvented himself online as a "gothic prince" called Dalyant Maximus. He took part in the annexation of Crimea as part of the pro-Kremlin People's Liberation Movement.

Maximus now co-operates with the "Ministry of State Security" of the "Donetsk People's Republic", where he appears in some of the videos.

The common backdrop for the pro-separatist films and the faked anti-Ukraine propaganda videos is the Izolyatsia art centre in Donetsk which was seized by separatists.

Maximus published one video promoting the special forces of the "Republic". And the art centre was also the setting for a fake propaganda video about fighters from so-called Islamic State fighting in a Ukrainian National Guard division, uncovered by BBC Russian in 2016.

That video was published by the pro-Russian hacker group CyberBerkut.

Interactive: View the Izolyatsia art centre in Donetsk in 2012 - and the same location in a propaganda video in 2015 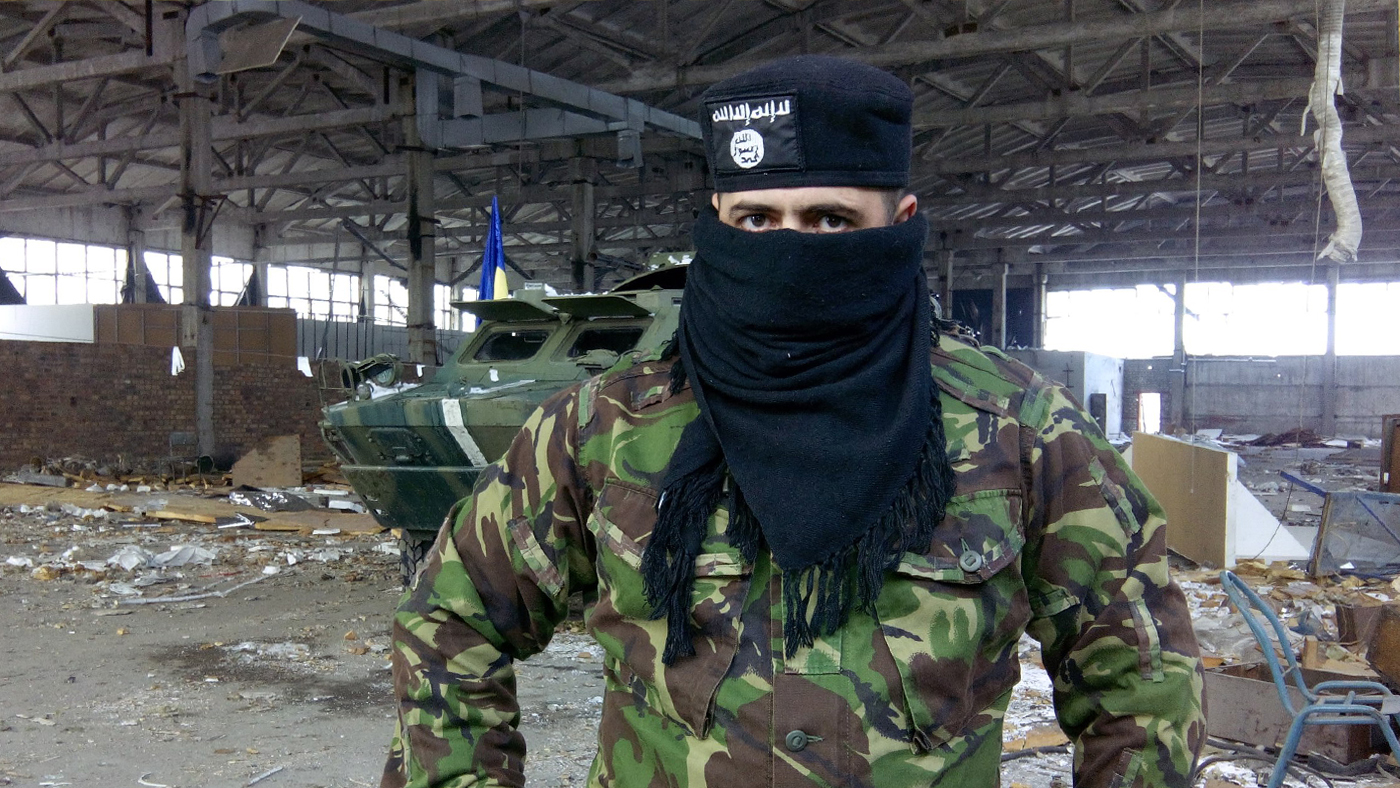 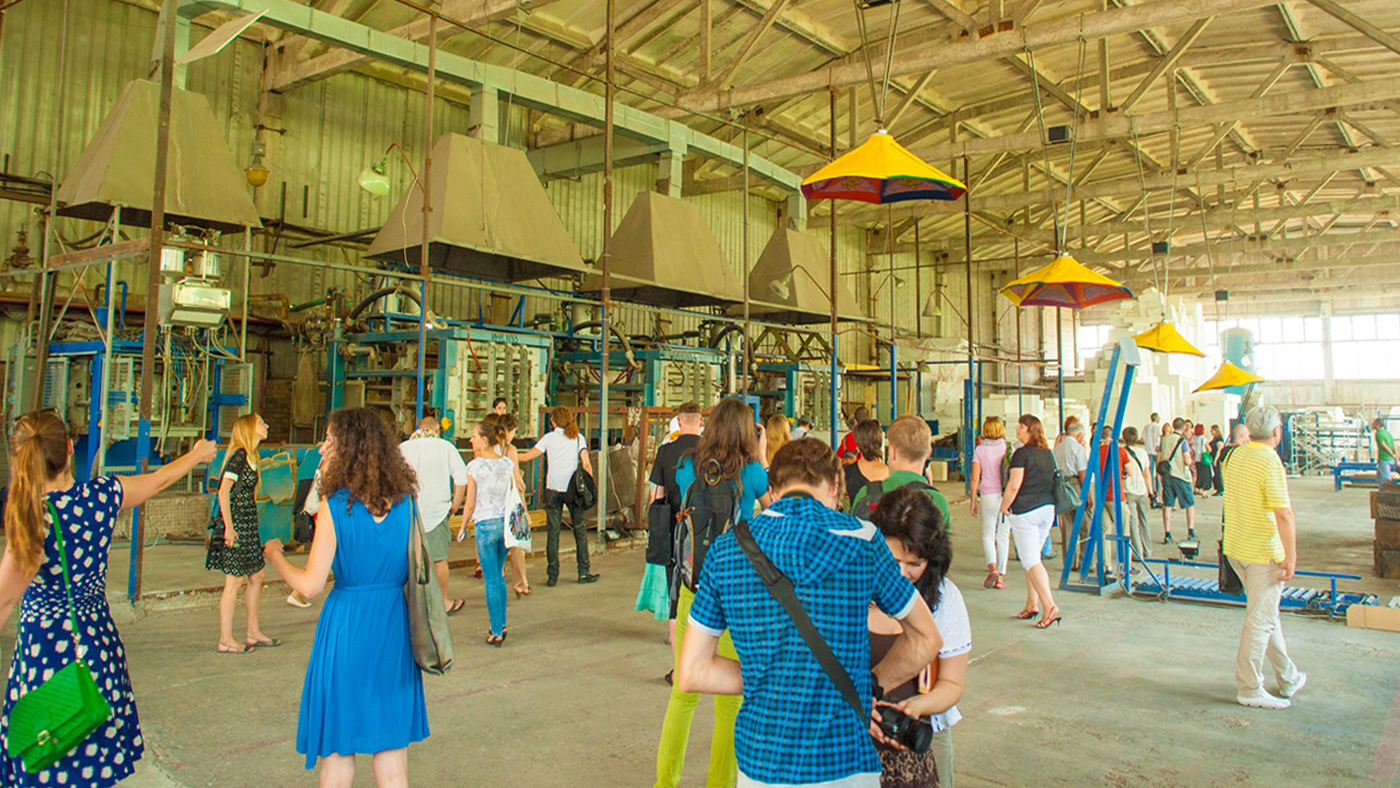 The video features music from the computer game Quake - as do other CyberBerkut videos in which Dalyant Maximus plays the lead and directs. His name isn't in the credits and his face is hidden under a limited edition hand-made knight's helmet. BBC Russian found that Maximus, who is a regular on historical military re-enactment forums, bought his helmet in 2014.

In the videos, Dalyant also sends impassioned messages to the Ukrainian security forces. In one he taunts them for living under a "Jewish occupation".

In one of them he calls CyberBerkut a "division" of the "Interior Ministry" of the "Donetsk People's Republic". He also declares that he leaked the personal details of Ukrainian soldiers to hackers.

On the same online channels where Dalyant Maximus videos are disseminated, other "masked showdowns" filmed by the Donetsk rebels are posted. They claim responsibility for an explosion in a local bar which injured 13 people, for blowing up part of a military hospital and a cash machine, and many other bombs placed on railway tracks and bridges.

In one video they produced, real acts of terror are listed alongside made-up ones - like the "murder of five American instructors at a tank repair factory" - all along to the soundtrack of the American film Rocky.

The propaganda machine in Donetsk also has links to the Internet Research Agency (IRA), a so-called "troll factory" in St Petersburg is famous for employing young Russians to post thousands of comments on Western news sites and social media networks, for hacking and botnets, and for spreading fake stories online. Some fake items created by CyberBerkut have connections with the agency. For example, in April 2016 the IRA published a video which appeared to show where an advertising sign in New York's Times Square had been hacked to show an image of Vladimir Putin winking. The video was a fake.

The hacking agency was also behind an elaborate ruse designed to discredit a Putin opponent and wealthy former Russian businessman living in exile, Mikhail Khodorkovsky.

At the end of 2016, a video appeared which showed a man in a mask who introduced himself as a former employee of a Khodorkovsky media project called the Centre for Directing Investigations. The video claimed to show photos taken in the centre's Moscow headquarters, which showed apparently damning signs on doors leading to the "Media Fakes Department" and the "Social Media Department".

The video claimed that behind those doors, saboteurs sowed panic among with false reports about poisoned medicines. The masked man promised further "revelations" but then claimed that he was beaten up by Khodorkovsky's employees.

Like the Russian Liberation Movement, the anti-Khodorkovsky videos were provable fakes. BBC Russian tracked the location of the pictures to a business centre not in Moscow but in St Petersburg, close to the headquarters of the Internet Research Agency.

The revelations point to a problem for the propaganda-makers - making their often-absurd claims believable. But Aric Toler of the investigative website Bellingcat, suspects that believability may not be the whole point.

"I think that the fakes are not meant to be extremely convincing," Toler says. "All it takes is a few popular news outlets... to run a headline about a video of a Ukrainian far-right group 'reportedly' making a threat. The vast majority of people only look at headlines for stories and won't see any future retractions - so the damage is done."

Toler believes that the fake Russian Liberation Movement claiming the suspected Rostov arson - despite any evidence to back up the claim at all - may also have been somewhat effective.

"Perhaps the video was a smokescreen to hide the real purpose of the arson, or maybe it's just an opportunity to create this bogeyman of the anti-Putin ultranationalist."

Do you have a story for BBC Trending? Email us.

Social media accounts with ties to Russia pushed a huge Twitter trend in favour of an independent California on US election night 2016, BBC Trending has learned. READ MORE

Our radio show airs every Saturday on BBC World Service