My Money: Lucy's guilt over spending £1.50 on tuna

My Money is a new series looking at how people spend their money - and the sometimes tough decisions they make. Here, Lucy Holligan from Leicester, records her spending over a week, and shares tips for saving including a cheap, healthy recipe suggestion.

We're looking for more people to share what they spend their money on. If you're interested, please email my.money@bbc.co.uk or get in touch via our My Money Facebook group and we'll aim to contact you.

Lucy is 27 and works in marketing. She bought her first house this June. She pays £436 a month towards her mortgage, while her lodger pays her £400 in rent each month. Her hobbies are playing tennis, travelling and watching comedy shows. Over to Lucy.

Lucy's week: A lodger moves in, and guilt over a tin of tuna

Today I was supposed to go shopping but due to last night's excesses I didn't think a reverse bay park was a good idea.

That meant I had nothing in the house for dinner apart from a baked potato. So, even though I knew it would cost more, I went to the local shop where I spent £1.50 on a tin of tuna and £1.10 on milk.

I was actually quite annoyed with myself because this happens every week; I go out, there's nothing in the house the next day, I pick up a "few bits" from the local shop and end up spending more than I should.

I've recently bought a house, having previously lived at home for two years where I saved up money and wore bras that slowly turned into barbed wire.

I'm incredibly lucky to be in the position that I'm in at 27, but moving out has made me quite money conscious and I'm forever in the "reduced" aisle!

Today my lodger moved in. This is going to help out massively with my mortgage and overall spending because, although things are all right with money at the moment, I just about break even and I would really like to have some money to save.

It does mean that I lose my Single Persons Discount for council tax (25% - roughly £30). And my house insurance has increased by £3.80 per month - which I don't think is too bad. My plan is to overpay on my mortgage by £100 per month, which should bring down my mortgage term from 30 years to 23 years.

This week's weekly shop came to £24.20 and no doubt I'll be back later in the week for other bits and bobs. I try and plan out my meals in advance so I'm not tempted to get a takeaway or bury my face in a bowl of pasta, but food is one of the main areas where I fall down when budgeting. I'm always trying to make quick, healthy, low-cost meals but 90% of recipes seem to have over 20 ingredients and I still have no idea what star anise actually is.

I pretty much bring the same lunch into work every day: A chicken sandwich, banana and Eat Natural bar. This works out at about £1.80 per day. I'm aware that it's not the cheapest it can be, but seeing as lunch is the pinnacle of my working day, I'm willing to take the hit.

In the evening I played netball at the local leisure centre, which costs £2 per session. I really enjoy the class as it's a good way to unwind while keeping fit and at £2 I think it's quite good value for money.

Unfortunately I've had to get my phone screen repaired which is an unexpected spend this month. It cost me £60 to get a man from a local shop to repair it as opposed to the phone manufacturer, which would have been upwards of £100.

This would have been great, had the guy not smashed the back of my phone in the process - and hastily glued on a replacement cover. The smudges are his fingerprints.

Thankfully when I moved out, I prepared myself for these sorts of "emergency" spends as well as the big upfront costs such as car insurance, TV licence and Road Tax etc. because in most cases it's cheaper to pay annually rather than monthly.

So I've added them all up, divided the amount by 12 and set up a monthly direct debit into a high interest, easy access savings account. That way I have enough money to pay most things annually and I should have a little bit extra.

Today I paid £20 for half a tank of petrol. This usually lasts me around four or five days and I shop around for the cheapest rates, which just happens to be at the supermarket around the corner from me.

Tonight's meal is cod and couscous, which is incredibly easy to make and budget friendly. 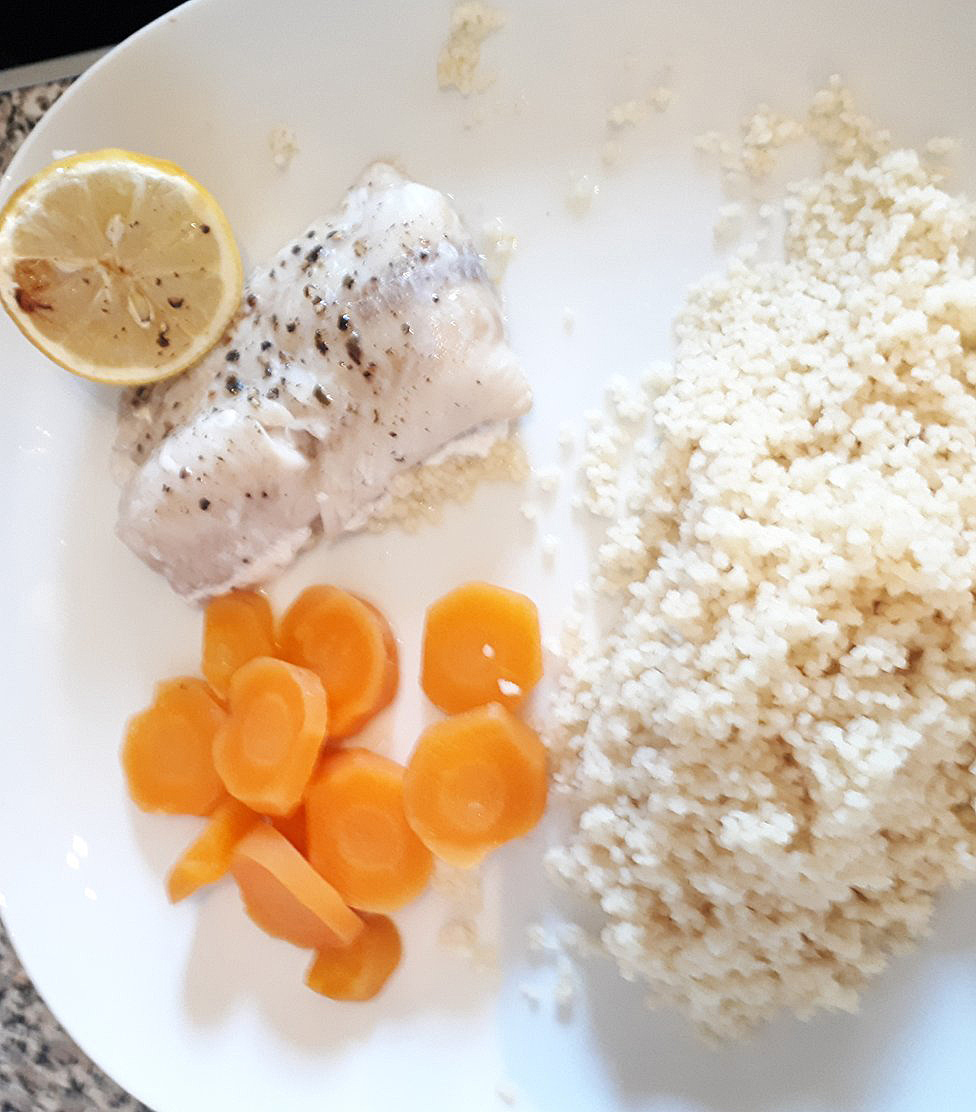 I actually managed to spend no money today. There's a tuck shop at work that's within eyeshot and therefore really hard to resist. But I have to admit there's the odd occasion where I can't resist the call of McCoys salt and vinegar crisps, which would set me back around 70p.

When I got back from work I went to the gym, which costs me £25 per month, and went about making dinner.

Today's meal was tomato pasta. I've worked out that the foundation to cooking is browning off some onion and garlic - and then you can basically add anything and confidently call it a meal. So today I browned some onions and garlic, added four mushrooms and half a tin of chopped tomatoes. After the pasta was cooked I poured the sauce over it and sat down to watch TV.

Today I took my car for its MOT and service, which I was quite nervous about and for good reason as it failed its MOT! I got the good news via WhatsApp complete with pictures of my worn brake discs and "dangerous" condition of one of my front tyres.

To cut a long story short, the whole lot cost me £376 but luckily I had already budgeted for this in my emergency/ upfront costs account.

This account also covers my car insurance, which is in excess of £800, (even though I've been driving for nine years) as this is the first time I've been put down as the main driver of the car. My mother was quick to point out that my solution to this problem was a criminal offence called "fronting".

Friday usually means drinks at the pub or if we're feeling particularly adventurous "out out". As it happens we just went out to the local pub for a couple of drinks.

I've got a Monzo account which works a bit like a prepaid card, only you can see how much you've spent and on what. I usually put £100 on it at the start of it and watch with horror at how quickly I spend it.

Thankfully tonight was a cheap night as there were only two of us. Although I only spent £7.95 this week, I would say my average is about £20 per week - and around £30 if I was going "out out".

How does Lucy feel about her week?

This sounds pretty high! But I think this is because of the amount I spent on my car. Otherwise I was pretty restrained.

It was the little spends which got me. You kick yourself because you should be more savvy.

There's a convenience store around the corner where I get milk and cans of food from when I'm feeling lazy. Usually I would buy food from the supermarket.

I'm still a novice when it comes to saving money. My mum gives me lots of advice. And I also trust Martin Lewis. He is very credible.

They are among some 400 Americans being taken off the Diamond Princess quarantined in Japan.

Could it be Bernie Sanders v Donald Trump?

The community built by women who fled violence

'I got diagnosed with Parkinson's aged just 31'

Stripped for standing up to 'period-phobic' college

Your pictures on the theme of 'wooden'