What are the parties offering voters on health and social care?

Here are our answers to a selection of readers' questions.

Where do the parties stand on mental health? - Ellen

The Conservatives have pledged an additional £2.3bn in real terms by 2023-24 for mental health. This is roughly a 20% increase on the current mental health budget.

Labour says it will provide an additional £1.6bn a year for mental health by 2023-24 on top of the government's £2.3bn pledge. It would spend more on services for people with eating disorders, and on upgrading hospital facilities.

The Liberal Democrats want a 1% income tax increase, to go to the NHS and social care. Of that, 30% would be spent on mental health. This represents an additional £2.2bn a year, mostly for England. They want to improve waiting times, and increase access to talking therapies.

What are the parties planning to do about social care? - Judith Bayley

Labour says it will set up a national care service. Personal care - help with washing and dressing - will be provided free. This seems bold, but much will depend on how frail an individual is expected to be before they get help - the impact could be limited.

Both the Conservatives and Lib Dems promise more investment in the social care system. They say they will work with other political parties to find a solution to the problems with the care system. Only a fifth of older people who need help get support from the state.

The Tories have also explicitly committed to ensuring people do not have to sell their homes to pay for care. But how this will be achieved is not yet clear.

What are the various parties planning for the NHS? - John Henry

In government the Conservatives have set out a five-year funding plan which started this year. It will see the budget rise by 3.4% a year on average, so that by 2023-24, £149bn will be spent on front-line services. They have promised 50,000 more nurses in England and the creation of 50 million more GP appointments.

Labour has said it will spend more: another £6bn extra a year by 2023-24, which the Lib Dems have pledged to match. But the gap could be smaller, as the Tories have promised to provide extra support to the NHS to cover its rising pension bill.

Both the Lib Dems and Labour have promised to re-introduce bursaries to help nurses fund their studies.

Health is devolved, so Scotland, Wales and Northern Ireland can make their own decisions.

Could future contracts be won by US healthcare companies? - Carol Ackroyd

Private firms are already involved in providing NHS care. Just over 7% of the budget goes on private providers, up from just over 5% in 2011-12.

Under current rules, foreign firms with a European subsidiary can bid for NHS contracts. A few US companies work in the NHS, particularly in England, on a fairly small scale.

The UK currently allows competition in its markets - including public services - as part of the EU single market. Under EU law, there are explicit protections for health services (which a judge has to take into consideration if a dispute between a foreign company and a member state gets to court).

It is possible that the US government would want to negotiate a trade deal that didn't include these kinds of protections, or which could allow US companies to cherry-pick the most lucrative cases.

But it is not clear that any UK government would agree to such terms.

Is it true to say there are record numbers of doctors and nurses in the NHS? - Roger Morley

In absolute terms, this is correct - there are 89,000 more people working for NHS England than when the Conservative-led coalition took office in May 2010.

That represents about a 9% increase, and a record amount of doctors and nurses in England.

Yet current vacancies are close to 100,000, representing the number of extra nurses, doctors and health assistants the NHS says it needs to run its services.

This is partly down to growing pressure on the health service as the population grows and ages. In A&E, for example, attendances have increased by over 20% in the same period.

Health think-tanks expect these vacancies to increase as the social care system struggles to keep up with an ageing population. 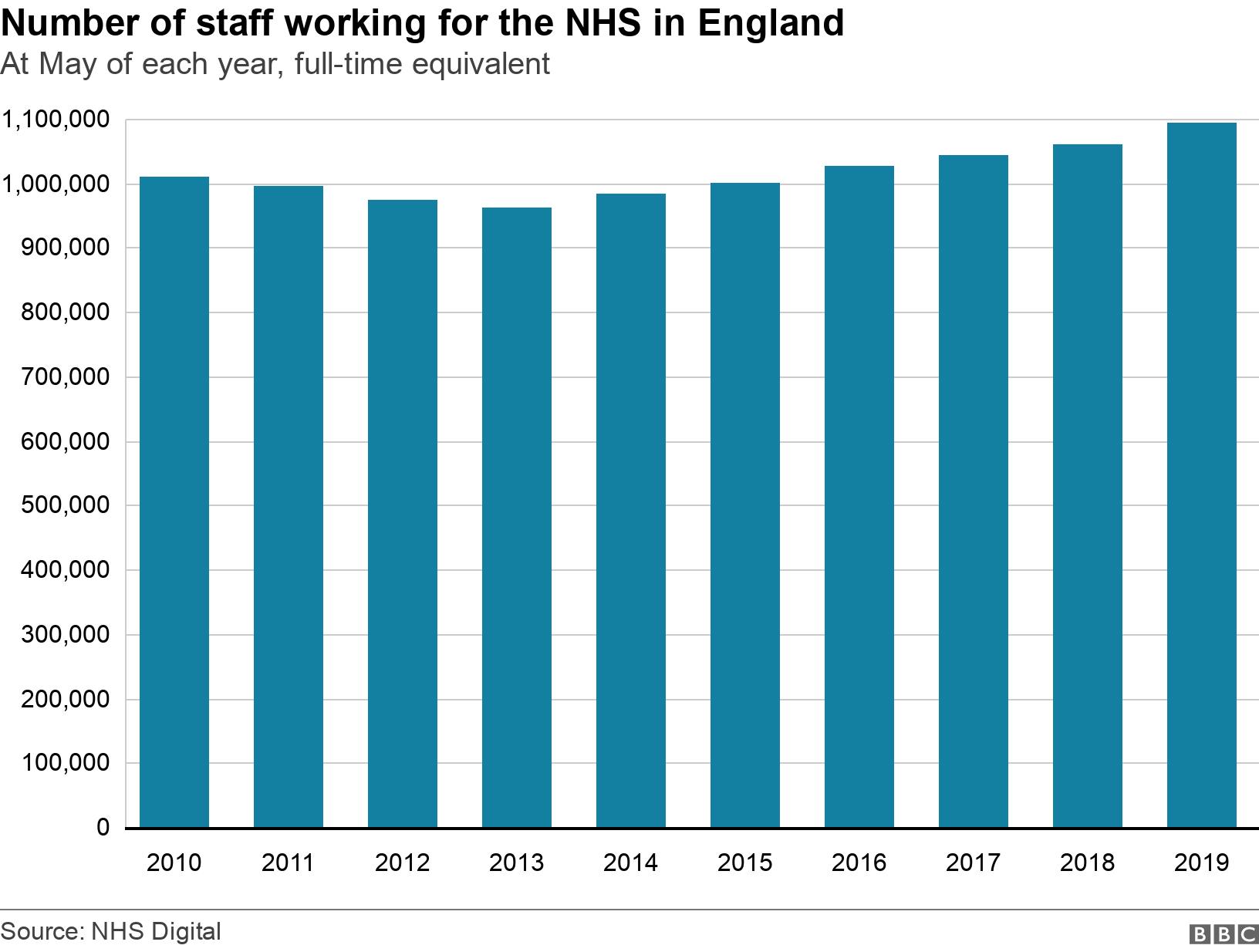 Where does the government get money from to pay for the NHS? - John Ansell

On top of this there are National Insurance contributions, a compulsory payment made by employers and workers.

In addition, a small proportion of NHS funding - 1.1% in 2018-19 - comes from patient charges, including those for prescriptions and dental treatment.

What are your questions about the general election? You can let us know by completing the form below.

In some cases your question will be published, displaying your name and location as you provide it, unless you state otherwise. Your contact details will never be published. Please ensure you have read the terms and conditions.