President Trump and his Democratic challenger Joe Biden have gone head-to-head in the first of three televised debates before the US election in November.

During a heated 90 minutes, the nominees clashed over everything from the state of the economy to the handling of the coronavirus pandemic. Reality Check has unpicked some of their claims.

Trump: "We built the greatest economy in history"

Verdict: That's not right - there have been times in US history when the economy was stronger.

Before the coronavirus outbreak, President Trump claimed to have generated historic economic growth.

It's true the economy was doing well before the pandemic - continuing a trend that began during the Obama administration - but there have been periods when it was much stronger.

The economy under Trump in six charts

Verdict: This is roughly correct. But looking at coronavirus deaths per capita, there are a number of countries which are worse than the US.

According to the figures, his claim is about right. The US population is around 328 million, which is just over 4% of the 7.7 billion global population.

There have been 205,942 coronavirus deaths recorded in the US, according to the latest John Hopkins University data. The total number of deaths recorded worldwide is 1,004,808.

On this metric, the US accounts for about 20% of Covid-19 deaths worldwide, although the way countries record their figures varies considerably. 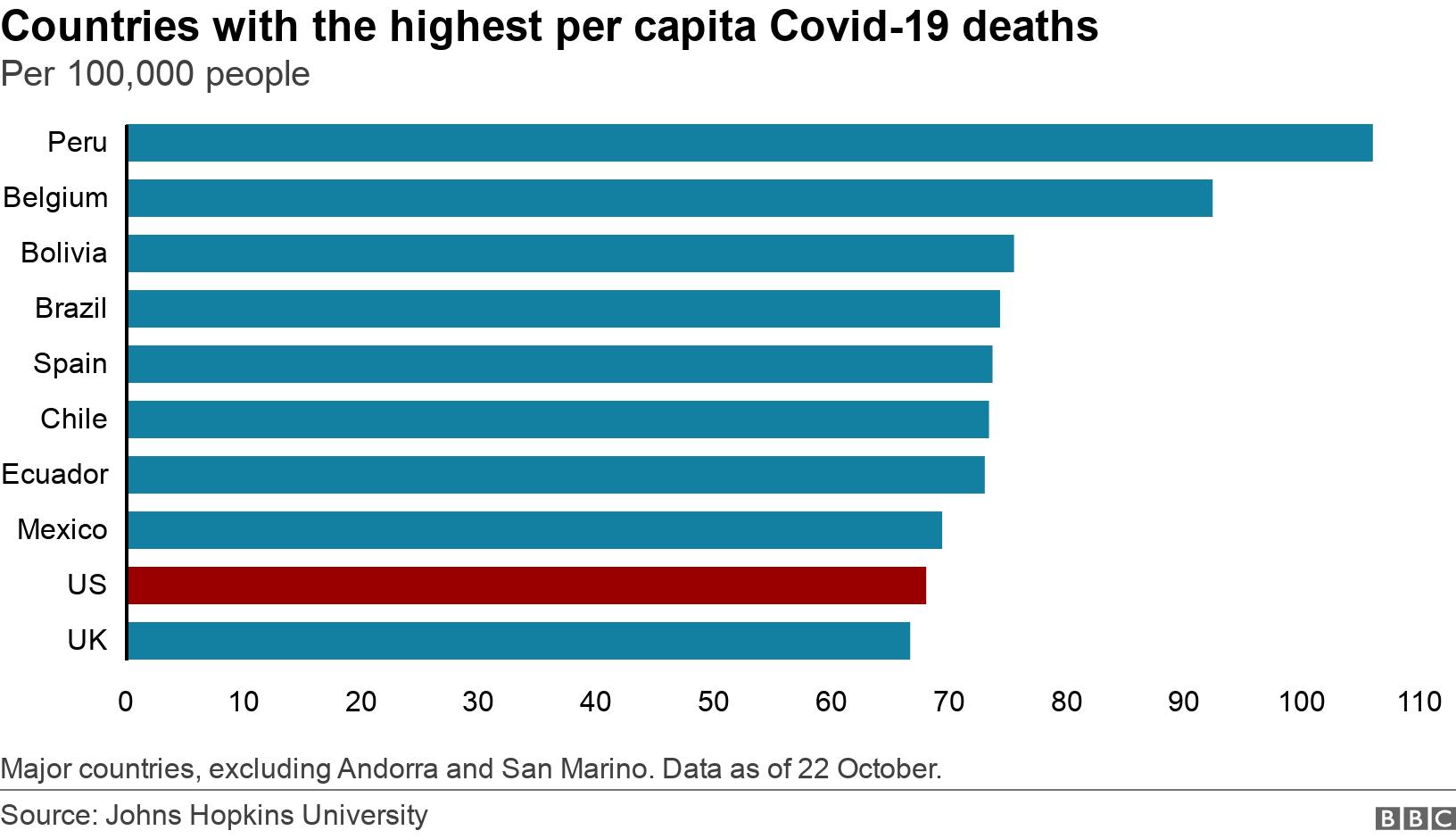 Trump: Postal ballots increase will cause "a fraud like you've never seen"

Verdict: Studies have not found evidence of widespread fraud, although there have been isolated cases.

Due to the coronavirus pandemic, a large proportion of US voters are expected to use postal voting in this year's election.

The president has repeatedly warned that this will lead to widespread fraud.

There have been isolated cases of fraud including recent examples in North Carolina and New Jersey.

In September, the US Department of Justice released a statement about an incident in Pennsylvania in which "nine military ballots were discarded" and said seven of them "were cast for presidential candidate Donald Trump".

But despite such incidents, numerous studies have not revealed evidence of major, widespread fraud.

Biden: "100 million people [in the US] have pre-existing conditions"

Verdict: There is no definitive answer to this.

The candidates clashed over how many people in the US have pre-existing medical conditions, which can stop some Americans from being covered by private medical insurers.

Mr Biden said there were 100 million people with pre-existing conditions, but President Trump said that number was "totally wrong".

So how many are there? There is no definitive answer.

According to the US government's Department of Health and Human Services, between 50 and 129 million non-elderly Americans have some type of pre-existing health condition.

Other organisations have different estimates. The Center for American Progress believes it is higher, at 135 million people under age 65.

Trump: "We're weeks away from a vaccine"

Verdict: There is a "very, very low chance" of an approved vaccine being ready by the end of October, the chief scientific adviser to the US vaccine programme has said.

Moncef Slaoui made this cautious assessment in early September.

Meanwhile, Dr Anthony Fauci, the country's top infectious disease expert, has predicted the US will know if it has a safe and effective jab by November or December this year.

He told a Senate committee hearing this month there might be enough doses for every American by April.

Biden: "Manufacturing went into a hole" before coronavirus

Verdict: That's not right, according to the figures.

Democratic candidate Joe Biden suggested that even before Covid-19, "manufacturing went into a hole".

The pandemic did have an impact on this sector. As of August, there were 237,000 fewer manufacturing jobs in the US than when Trump took office in 2017.

But prior to the outbreak, President Trump had added almost half a million manufacturing jobs during his first three years in office.

Verdict: That's not right. The sheriff of Multnomah County, which includes the city of Portland, says this is not true.

In defending his approach to tackling protests in US cities, Mr Trump said he'd had widespread support from law enforcement groups.

He claimed this included the sheriff in charge of law enforcement in Portland, which has become a flashpoint for demonstrations against police brutality and racism in recent months.

Mike Reese, the sheriff for Multnomah Country swiftly denied this on Twitter: "I have never supported Donald Trump and will never support him."

In tonight’s presidential debate the President said the “Portland Sheriff” supports him. As the Multnomah County Sheriff I have never supported Donald Trump and will never support him.

Verdict: That's not right. He did use the word "predators" but did not use this to refer to African-Americans.

In 1993 Mr Biden warned of "predators on our streets" during a speech before a vote on the key crime bill in Congress.

There was no specific mention of African-Americans but the crime bill was later criticised for increasing mass incarceration which disproportionately affected African-American men.

The term "super-predator" was used by Hillary Clinton in 1996 in support of the controversial bill.

Ms Clinton said: "We need to take these people on. They are often connected to big drug cartels, they are not just gangs of kids anymore. They are often the kinds of kids that are called super-predators - no conscience, no empathy."

Verdict: The average monthly cost of prescription drugs fell slightly in the year to August 2019, although it then rose again.

According to the Bureau of Labor Statistics Consumer Price Index (CPI) - which measures the cost of household items in the US - the average monthly cost of prescription drugs fell by 0.3% in the year to August 2019.

This was the first price decrease over a 12-month period since 1973. While average drug prices rose by 1.5% over the following year, under President Trump the average rises have been lower than under President Obama.

The CPI is not necessarily the most reliable way to measure drug prices, as it mainly includes widely used drugs, which are usually cheaper. It is less likely to include newer or less-prescribed drugs, which are more expensive and have higher price increases.

Trump: "Hunter [Biden] got thrown out of the military. He was...dishonourably discharged…for cocaine use".

Verdict: Hunter Biden, Joe Biden's second son, was discharged from the navy after failing a drug test, but not dishonourably discharged.

President Trump brought up Hunter during an exchange about Beau, Joe Biden's eldest son, who served in the US military and died of cancer in 2015.

Mr Biden replied that it was not true that Hunter had been dishonourably discharged.

Hunter Biden was discharged from the US Navy in 2014, and media reports at the time said that a navy drug test had detected the presence of cocaine.

However, he was not dishonourably discharged, which is the highest level of punishment the military can hand out.