Clinicians can judge whether under-16s can give informed consent to take puberty blockers, the Court of Appeal has ruled.

The ruling followed an appeal brought by the Tavistock Trust, which runs the UK's only youth gender identity clinic.

What are puberty blockers?

Puberty blockers are drugs used to "pause" puberty by suppressing the release of hormones.

The hormones act as messengers telling the body to develop things such as breasts, periods, facial hair or a deeper voice.

Puberty blockers are prescribed to some children who are experiencing gender dysphoria, to temporarily stop their bodies developing.

The NHS describes gender dysphoria as "a sense of unease that a person may have because of a mismatch between their biological sex and their gender identity".

The drugs are also used to treat conditions which cause premature puberty in much younger children.

Why are they used?

The Tavistock's Gender Identity Development Service (Gids) says pausing puberty can give a young person more time to consider their options, without the additional distress of unwanted changes in their body.

By pausing the development of breasts, for example, someone who goes on to have cross-sex hormone therapy may be able to avoid having them removed later on.

This hormone therapy involves taking testosterone, a masculinising hormone, or oestrogen, a feminising hormone. It is a treatment only available to over-16s on the NHS in England.

The Tavistock Trust argued in its appeal that it was not inevitable for children using puberty blockers to later take cross-sex hormones - although the limited evidence that exists suggests that most young people beginning the first treatment go on to the second.

What was the appeal case about?

The case looked at whether clinicians could use their judgement as to whether an under-16 patient could understand the implications of taking puberty blockers.

It challenged a High Court ruling from 2020 that found under-13s were "highly unlikely" to be able to give informed consent to what it described as "experimental" treatment.

Judges added that it was "very doubtful" those aged 14 and 15 would have sufficient understanding either.

The Court of Appeal overturned this ruling, a decision the Tavistock clinic says "affirms that it is for doctors, not judges, to decide on the capacity of under-16s to consent to medical treatment".

Keira Bell, one of the people who brought the High Court case against the Tavistock, will now seek permission to appeal to the Supreme court.

She was prescribed puberty blockers aged 16, but later changed her mind over her decision to transition to a male.

Ms Bell argued the clinic should have challenged her more over her decision to transition.

After the decision by the Court of Appeal, she said: "I am obviously disappointed with the ruling of the court today, and especially that it did not grapple with the significant risk of harm that children are exposed to by being given powerful experimental drugs".

Why are puberty blockers controversial?

Puberty hormones are linked to changes not just in the body but also in the brain.

Some early data from one study showed some of those taking the drugs reported an increase in thoughts of suicide and self-harm, but it was unable to say whether it was the drugs or something else causing this. Experts on clinical trials criticised the design of the study, but said the data warranted further investigation.

NHS England says: "Little is known about the long-term side effects of hormone or puberty blockers in children with gender dysphoria.

"Although Gids advises this is a physically reversible treatment if stopped, it is not known what the psychological effects may be.

"It's also not known whether hormone blockers affect the development of the teenage brain or children's bones. Side effects may also include hot flushes, fatigue and mood alterations."

The National Institute for Health and Care Excellence (NICE) lists a decrease in bone density as a possible side effect of triptorelin, the puberty blocker drug used by Gids.

It has also been claimed puberty blockers may effect someone's fertility and sexual functioning, but there is not good evidence for this.

Several reports have suggested children with gender dysphoria who do not take puberty blockers might be at increased risk of suicidal thoughts. But these surveys are often self-selecting and so may not be fully representative. Mental health issues usually have many complicated factors and it is difficult to attribute feelings like these to any single cause.

The High Court judges said their original decision was only on the informed consent of a child or a young person, not whether puberty blockers themselves were appropriate.

Following the High Court rulings, NHS England announced it would set up a review group to assess the prescription of puberty blockers for under-16s. It's also awaiting the outcome of an independent review into gender identity services for children.

The NHS says when children are referred to the gender identity service they are seen by professionals - including psychologists, therapists and social workers. It says most treatments offered are psychological rather than medical and that puberty blockers are only given to those who meet "strict criteria"

Has there been an increase in referrals?

There was a large increase in children being referred to Gids between 2014 and 2018, which has levelled off more recently. 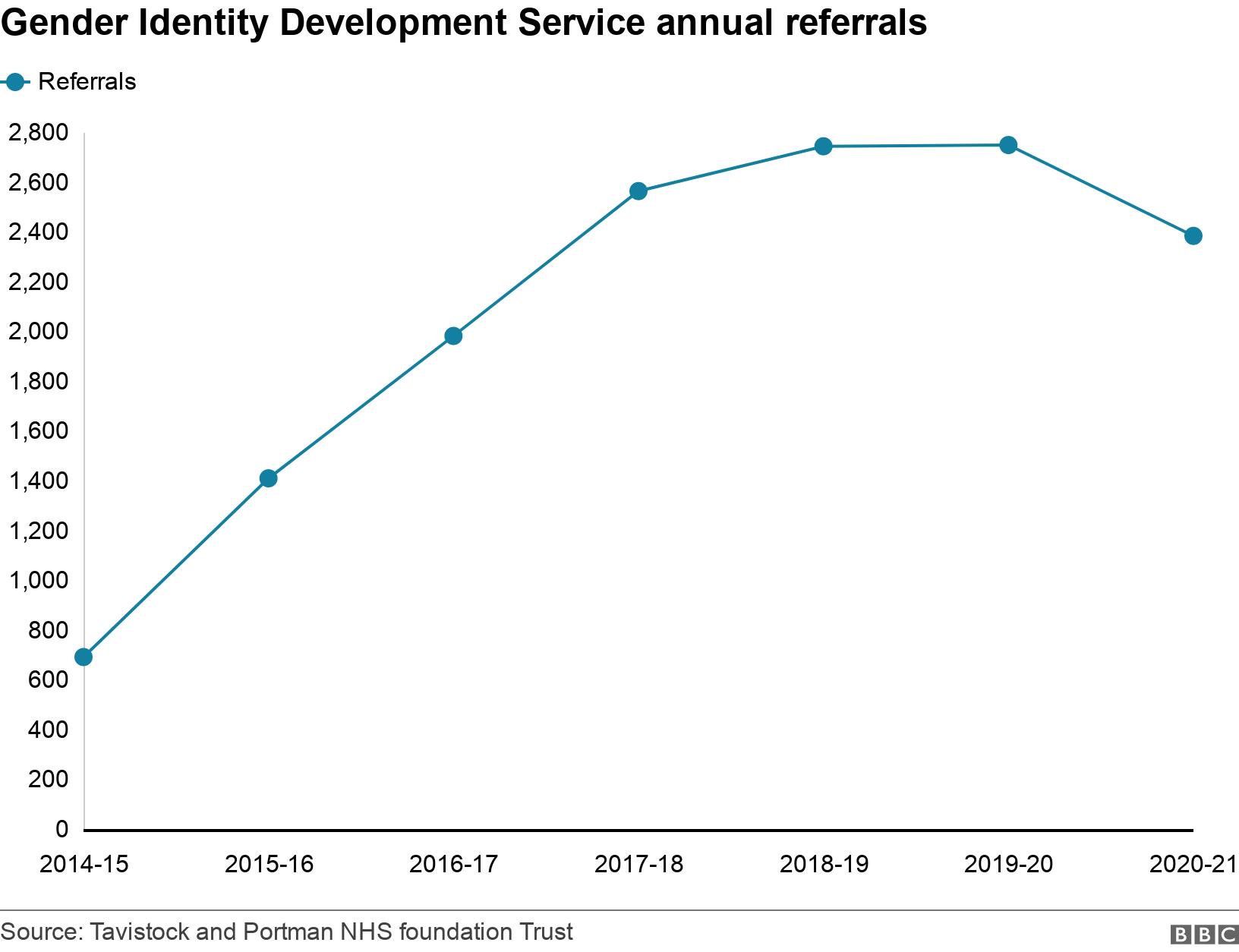 While there is no clear explanation for this increase, Gids puts it down to greater awareness.

Large increases in referrals have also been seen at gender identity clinics elsewhere, for example in the US and Canada.

There has also been a shift in the past few years, with people whose sex at birth is female making up the bulk of the increase in young people wanting to transition. 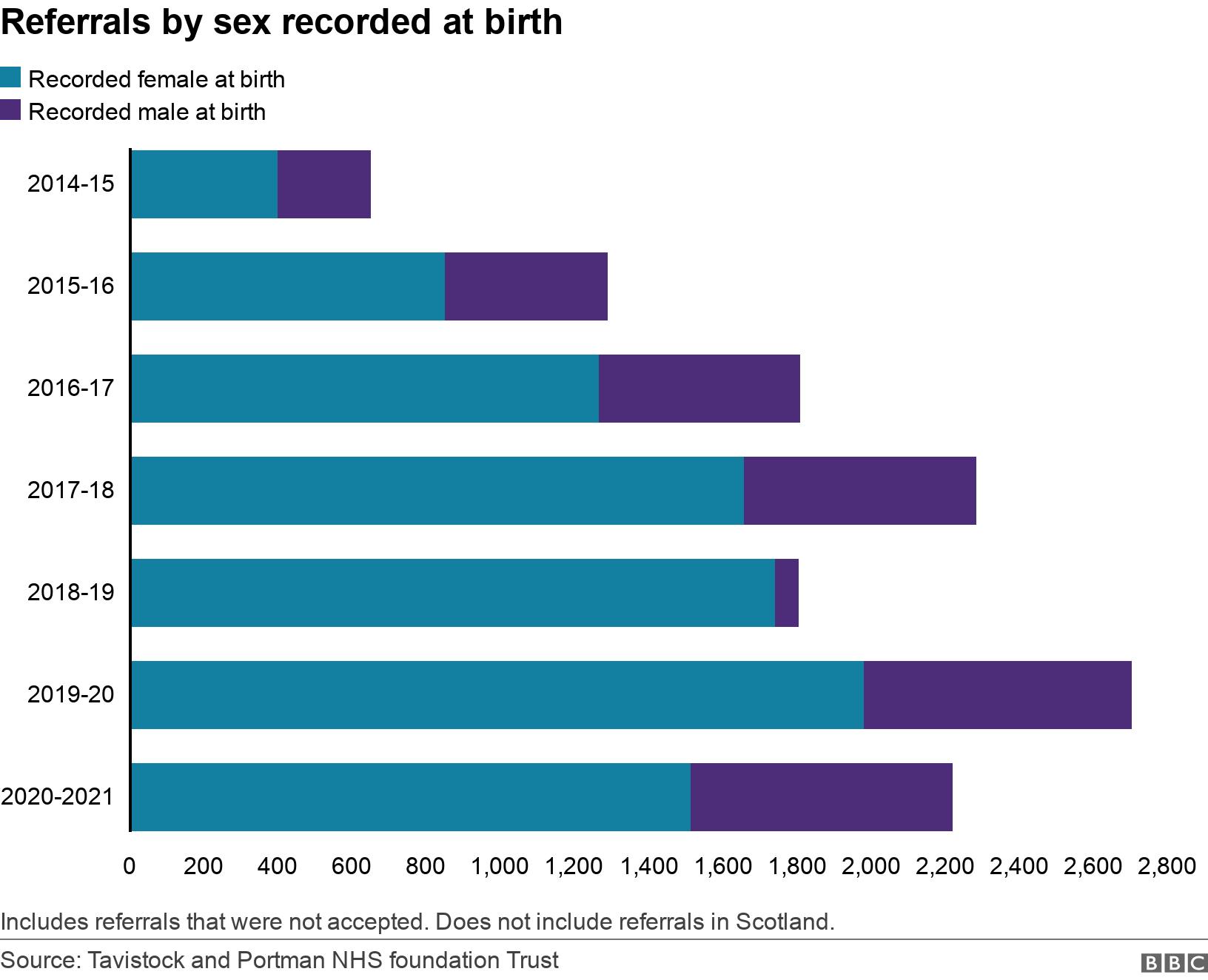 Clarification: This article was updated to add more detail on the studies into children with gender dysphoria and access to puberty blockers.