Who, what, why: How do you track a honey bee?

The latest research investigating why honey bees are dying involves tracking the small insects, but how do you track a bee?

Bee numbers have been falling dramatically and scientists are trying to understand why. In the past 25 years honey bee numbers in England have more than halved and they are still decreasing. It is a similar story elsewhere in the UK and in other countries.

Bees of all types - there are hundreds of them - play a huge role in the life of the countryside and a third of what we eat is reliant on bee pollination. Studying the behaviour of these complex insects is crucial to finding out what is happening but it is also a big challenge.

A honey bee can visit several thousand flowers in one day and navigate over several kilometres, so how do you track one?

Scientists are using harmonic radar technology. A radar transmitter emits a signal which is received by a tiny antenna glued on a honey bee's thorax (back). A small diode in the centre of the antenna converts it into a different wavelength that can be detected and followed.

The converted signal is unique. There is no other source in the environment, so scientists know it's the tagged honey bee. A portable radar tracking station is used to transmit the signal and gather the information sent back.

The system was developed by scientists at the Natural Resources Institute and is operated by scientists at Rothamsted Research, a government-funded agricultural research centre in Hertfordshire. It's currently being used in several major research projects.

Each antenna is stuck to the honey bees by hand. Test bees are prepared by gluing a small plastic disc with an identification number on to the bee's thorax using strong double-sided adhesive. An antenna is later attached to the disc, again using adhesive.

The honey bee is caught by attaching a long plastic tube to the entrance of a hive. As the insects come and go two gates are dropped down, like portcullises, to trap one in-between. The antenna is removed the same way when the honey bee returns.

The signal sent from the tagged insect shows as a "blip" on a radar screen, scientists compare it to watching the moving dots on a ship's radar screen. It accurately shows how far away the honey bee is and in what direction it is flying. A computer programme is then used to reconstruct the honey bee's flight path from the "blips".

"This can be overlaid on maps of the area to accurately show where the insect has flown and the landscape features of that area," says Dr Jason Chapman, a radar entomologist at Rothamsted.

The technology was originally developed to study the tsetse fly in Africa, which spreads the potentially fatal sleeping sickness. The antenna was too big to tag the flies but works well with bees because they are larger.

It is still almost as long as a honey bee itself. Scientists say this is not a problem as the insect has evolved over millions of years to carry heavy loads, including pollen masses almost half its body weight.

A part of BBC News Magazine, Who, What, Why? aims to answer questions behind the headlines

"The tag only weighs a tenth of their body weight and it is very easy for them to carry that weight," says Chapman. "Also, because they are used to carrying weight it doesn't affect their flight pattern in any way."

The one drawback of the system is that only one honey bee can be tagged at a time, as the tracks of different bees could get mixed up. It makes research very time consuming.

"Our longer-term plans are to develop the next generation of harmonic radars which will be able to track more than one bee at a time," says Chapman.

The system is currently being used in two major research projects to investigate. They are investigating how the virus-spreading varroa mite and neonicotinoids, one of the most widely-used pesticides in the world, both affect bees' flight. Both are thought to be among the biggest threats to the survival of bees. 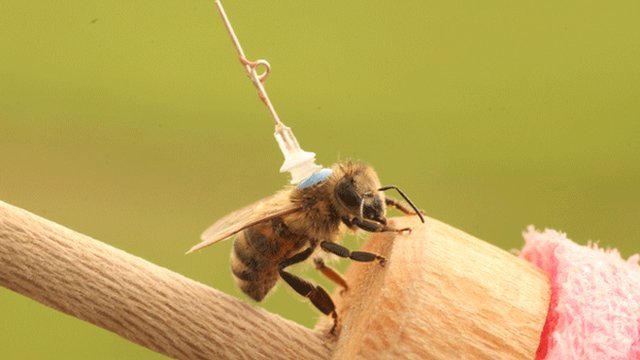 Exposure to Neonicotinoid pesticides has been shown to affect a bee's ability to navigate. In a demonstration done by Professor Randolf Mendel, two bees were captured and fitted with tiny radio transmitters. At a feeding station, one bee was exposed to neonics. When the bees were released, some distance from the capture site, the exposed bee was unable to find its way back to the hive.

Scientists at the Berlin Free University are using harmonic radar pioneered at Rothamsted to see if neonicotinoids affect a honey bee's navigation.

"Honey bees have an amazing ability to navigate," says insect neurobiologist Prof Randolf Menzel, who is leading the research. "This kind of cognitive process requires the highest order of neural processing in this little brain. That means anything which is disturbing this fine network process should have a high impact."

Or catch up later via iPlayer

Scientists at Rothamsted are using the technology to study the flight path of honey bees infected with a virus transmitted by the destructive varroa mite. The tiny parasite has led to the spread of some of the most contagious and widely distributed viruses on the planet, killing vast numbers of bees.

Changing land use is also a big problem. Some researchers, looking at sites around Milton Keynes (see map below), think the increase in agricultural and farm land is having an impact on bee populations as food sources are declining. The insects need nutritional variety to survive.

Agricultural land is what ecologists call a "green desert", over the years plants that bees do feed on have been replaced by vast expanses they don't feed on. The fields may look green but they aren't a good food source for bees.

Often urban environments offer bees and pollinators more to feed on because gardens, park and places like church yards have flowers growing and are a much more diverse foraging source. Bee experts are calling for more bee-friendly farming methods.