Frost fair: When an elephant walked on the frozen River Thames

It is 200 years ago since the last "frost fair" - an impromptu festival on a frozen Thames, complete with dancing, skittles and temporary pubs. Could such hedonism be repeated today?

Londoners stood on the Thames eating gingerbread and sipping gin. The party on the frozen river had begun on 1 February and would carry on for another four days.

The ice was thick enough to support printing presses churning out souvenirs. Oxen were roasted in front of roaring fires, drink was liberally taken and dances were held. An elephant was marched across the river alongside Blackfriars Bridge.

It was February 1814. George III was on the throne, Lord Liverpool was prime minister and the Napoleonic wars would soon be won.

People didn't know it then but this "frost fair" - a cross between a Christmas market, circus and illegal rave - would be the last. In the 200 years that have elapsed since, the Thames has never frozen solid enough for such hedonism to be repeated. 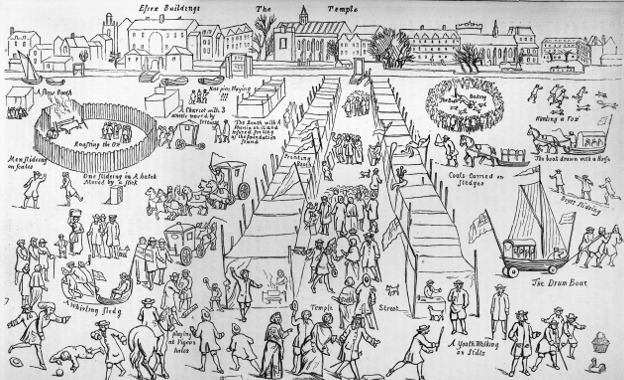 You must have JavaScript enabled to view this content.

Bull-baiting, ox-roasting, football - explore the 1684 frost fair by clicking on the image and zooming in (not on mobile)

A bicentennial exhibition at the Museum of London Docklands gives a vivid picture of what this extremely rare event must have been like.

"It was almost like a city on ice," says Georgina Young, the museum's senior curator.

The fair came about through necessity. London was the pre-eminent port in the world. But without a navigable Thames many livelihoods were at risk.

When the river froze, the watermen, who transported people along the Thames, and the lightermen, who moved goods, lost their ability to earn. They followed the tradition of their forebears and organised a frost fair, charging traders and punters for access to the ice.

The Times of 2 February 1814 reported that "in some parts the ice was several feet thick, while in others it was dangerous to venture upon". The action was focused between London Bridge and Blackfriars Bridge in the heart of the city.

The newspaper was not aware of any deaths but recorded that "many who ventured too far towards Blackfriars-bridge were partially immersed in the water by the ice giving way. Two coopers were with difficulty saved."

Activities were various. An illustration from 1684 shows figures "throwing at cocks", hunting a fox, bull-baiting, sledging and nine-pin bowling.

But by 1814 food and drink seemed to be the main draw. The highlight was the roast ox. Food historian Ivan Day, who has tried to replicate the revellers' cooking techniques, says it would take over 24 hours to roast the animal in front of a fire. A single animal could have fed 800 people. Mutton was also served - both in slices and in mince pies.

There was Purl - a mix of gin and wormwood wine, similar to vermouth. It was drunk hot and "you'd get absolutely wrecked on it", Day says. There was also a "very spiky" beer called Mum infused with spices similar to a winter ale. The tents - made out of sails and propped up with oars - were called "fuddling tents" for the ruinous effect of the strong liquor.

The temporary pubs - like modern day pop-ups - had interesting names. In 1814, one was called The City of Moscow to reflect the freezing conditions. "It was very boisterous," Day says. "It was fun, very drunken and there was a lot of cheating people out of money going on."

After the ice came the floods

On Saturday, for the first time since the heavy fall of snow, all the Mails arrived at the Post office in the course of the day...

The latter end of last week, the state of the streets of the metropolis from the accumulated masses of ice was very lamentable. Had the proper officers done their duty by causing it to be removed at the commencement of the severe weather, many very serious accidents would have been prevented. The Glasgow mail coach on its way to the Inn on Friday was overturned in St Martin's-le-Grand, and the driver thrown through a shop window and seriously hurt... The Courts of Justice were inaccessible. The avenues to the Theatres were also in a most disgraceful condition.

The raucous crowd and basic food made it a far cry from today's market a little down the river at Borough. "This was no Michelin star Heston Blumenthal-style food, it was all very simple," Day says. Women would walk round with baskets of hot apples on their heads covered by a cloth to keep them warm. Often the families cooking were the same butchers who had been doing it in previous centuries. "One family butcher doing it in 17th Century keeps on popping up. The same families seem to be cooking the ox."

Nowadays the police would be everywhere at such a festival, checking the ice for cracks and keeping an eye out for drugs. In 1814 there was no police force. It was up to the watermen to keep order and break up fights.

But could such an event be repeated?

The Thames has frozen since. In the winter of 1962-63 - known as the Big Freeze - a man was spotted cycling on the Thames near Windsor Bridge. But it was only parts of the Thames further upriver and for short periods, certainly not long enough to turn the capital's river into a mixture of circus and rave.

It was colder in those days. The frost fairs took place during the Little Ice Age, roughly between 1350-1850.

George Adamson, historical climatologist at King's College London, says that 1814 was the third coldest January since 1659, when the Central England Temperature records began. The reason was low sun spot activity and the North Atlantic Oscillation sucking in weather from Siberia, he says.

The average temperature for January 1814 was -2.9C. Today the world is gradually warming. The recent cold January of 2010 averaged 1.4C.

But even more important than climate now is the architecture of the Thames. A new London Bridge was built in 1831 with fewer arches, allowing more water from the sea to pass up river unencumbered. Saltier water means a lower freezing point. And the construction of the Embankment later in the 19th Century narrowed the Thames making it flow faster, another factor making freezing less likely.

"I'd be surprised if it froze again to the extent where we'd be able to allow large numbers of people on the Thames," says Adamson.

But it's not impossible. It's hard to imagine how Londoners and the authorities would respond to a frozen Thames today. Would health and safety rules permit a party? Would the Mayor of London attempt a photo-op on skates? And it's almost inevitable that hipsters would relocate their pop-up eateries from Hackney to the ice.

Young believes Londoners today would react in a remarkably similar way to those of 1814. "When you think about the deep snow in London, people do congregate, explore it and go sledging. So I imagine if the Thames froze again people would get onto the ice." Presumably, watched over by the requisite number of officers in high-vis jackets.

Frozen Thames: Frost Fair 1814, a free display, opens at the Museum of London Docklands, from Wednesday 29 January to Sunday 30 March 2014

The US city sees a third night of unrest sparked by the death of an unarmed black man in custody.

'The bodies were thrown out of the boat in the night'

'I built a virtual memorial for my grandfather'

Why I spent lockdown with 70 spiders

The coronavirus conundrum when your mouth is your ‘hand’