Alan Turing: Society failed the genius, we must learn from his loss

When Autonomy, my software company, went public, the city types wanted to see a traditional chairman rather than deal with these young precocious geeks that had created the software.

A suitable pillar of the establishment, a lawyer who was a QC, was recruited.

Conceived in India but born in Maida Vale, London, Alan Matheson Turing had a quintessentially English education. Despite struggling with some subjects such as Classics, his latent genius for mathematics and mechanics showed themselves from a very early age.

Turing's post-graduate work at King's College, Cambridge produced a paper called On Computable Numbers. It proposed using a machine to try all the potential solutions to a long-standing mathematical conundrum. It introduced the idea of the algorithm - a concept that is the basis of all computation.

During World War II Turing worked at the Government Code and Cipher School at Bletchley Park. He brought his intellect to bear on ways to crack coded messages produced by the Enigma machine - an enciphering device widely used by Germany's armed forces, especially its navy.

Turing's Bletchley work refined a machine invented by Polish cryptologists, known as a Bombe, that sped up the cracking of message enciphered by Enigma. By 1945 more than 170 Bombes were in action helping to keep an eye on German naval communication and preserving Allied convoys. 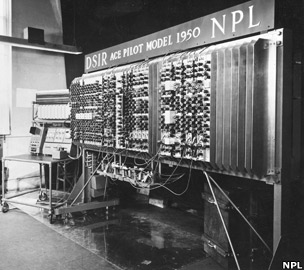 In 1945, Turing started working at the National Physical Laboratory in Teddington on a machine he called the Automatic Computing Engine. The complexity of its construction meant it was never built in the form Turing wanted. However a cut-down version, called the Pilot Ace, was built. 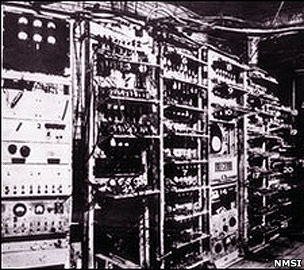 Disillusioned with the slow pace of work at the NPL, Turing left to join former Bletchley colleague Max Newman at the Computer Laboratory in Manchester. He wrote software that ran on the world's first stored program computer that had been built at the university - the Manchester Mark I. 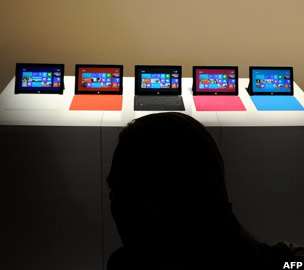 In 1954, Turing committed suicide using an apple dipped in cyanide. His death is linked to his treatment by the authorities after his homosexuality was discovered. The discovery placed restrictions on his work that he found intolerable. However, his influence lives on in modern computers and the net.
previous slide next slide

One day, when touring our research lab a young and typically fearless programmer walked up and said to the chairman: "So what do you think you know about software, how are you qualified for this job?"

At that point the chairman replied: "I was once babysat by Alan Turing".

A wave of respect descended over the software lab and there was never a reason to question his credentials again. Such is the legendary status of Alan Turing.

It is an achievement in life to have been credited with changing the course of history once in a lifetime, but to have done it twice in a short lifetime is truly exceptional.

Turing's work not only had significant impact on the defeat of Nazism through his Enigma code-breaking, but his mathematical work is the basis of modern computing.

The modern world of iPads, Facebook , mobile phones are all based on his ideas. His work is still the basis for much of the more fundamental research in artificial intelligence.

Sixty years on from Turing famously opening his paper on Computing Machinery and Intelligence, asking if machines can think, the idea of intelligent computers seems a little less ridiculous.

Technology has leapt forward year by year with ever greater processing powers, faster internet connections, sleeker interfaces and cleverer self-learning algorithms. We are close to computers being able to make value judgements, understand concepts and process the world in the same way as humans.

Turing was well ahead of his time and he is an example of UK-based thinking that has made this country great in the past and in the present.

We gave birth to the industrial revolution - and today British companies are some of the most recognised and iconic in the world.

From Rolls-Royce engines that power aircraft around the globe, to ARM chips that power smartphones, or universities that produce outstanding graduates and researchers, Britain is very much a player on the global stage, punching above our weight in many fields.

But just as Turing's generation was unable to fully understand and accept his brilliance, we today must not fail the future golden talent that could revolutionise our technology industry and change the world as a result.

We can encourage a love of technology at an early age and promote an ICT education system that develops analytical minds that learn to create stuff and make things work using technology, largely through trial and error.

It is young people who are adapting the quickest of all to new technologies and, crucially, the practices they facilitate. They tweet, download apps and buy online with astonishing agility and speed.

Government policy needs to give ICT teachers the freedom to move away from programme-based lessons and give them chance to show pupils the real magic of technology - of the power it has to create, improve and entertain.

The UK has a wealth of untapped talent, but to grow the Turings of the future we need to set the right educational ecosystem in place to allow young people to question our technological landscape, not just live in it.

The price of persecution

One evening I was discussing Alan Turing with our lawyer chairman and he produced something deeply poignant from his pocket.

His father, a Manchester solicitor, had defended Turing at this trial and his family had received a letter from Turing's mother shortly after his death.

So sad to read; it was a thread through time recounting so unnecessary a death. The harassment he suffered over his sexuality - generally credited as the cause of his death - is hopefully now an anachronism.

The loss due to him committing suicide using a cyanide-laced apple is perhaps a strong indicator of the price we can pay for our intolerances.

His life led to many advances that have improved the lot of humanity, from modern media to healthcare. Perhaps if he had lived in a more tolerant age he would have continued to produce yet more benefits for mankind.

A biography published by the Royal Society shortly after Turing's death - and while his wartime work was still subject to the Official Secrets Act - stated: "Three remarkable papers written just before the war, on three diverse mathematical subjects, show the quality of the work that might have been produced if he had settled down to work on some big problem at that critical time."

So next time you see the Snow White movie's poison apple scene rendered on a digital device spare a thought for the man who changed history forever and made that possible.

Mike Lynch OBE is the founder of Autonomy which was acquired by HP in October 2011, the largest European IT deal in history. He holds a number of advisory and board roles and currently serves as a non-executive director of BBC, Featurespace, Blinkx, and the Foundation of Science and Technology.

A US prosecutor says the FBI has contacted the Duke of York's lawyers as part of an investigation.