Twitter is about to become the most expensive watercooler in history.

After coming onto the scene in 2006 - and with a couple of years to warm up a bit - the site has cemented itself as the home of live, global chatter.

Our timeline highlights the key moments in Twitter's development, and we explore how hashtags have changed the way we communicate. 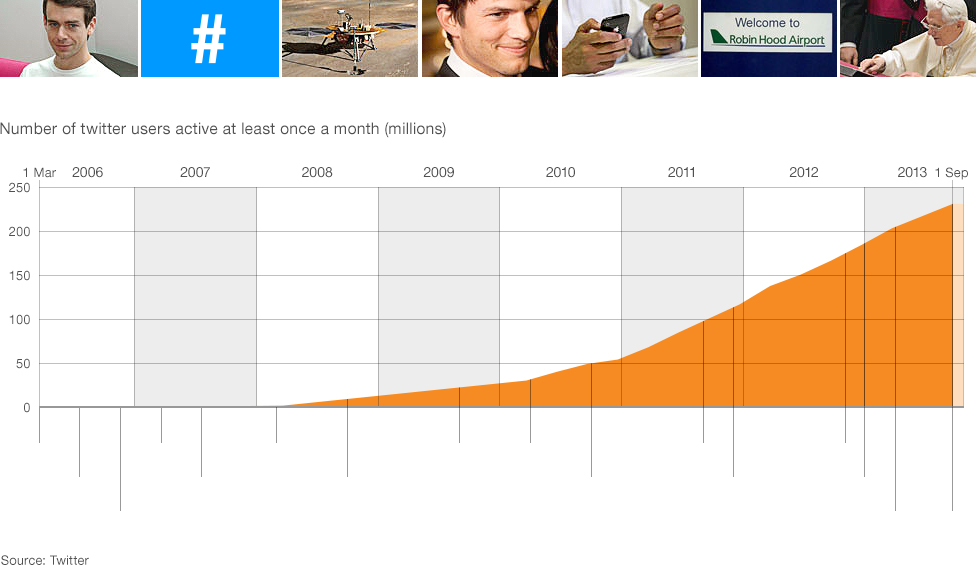 To some, it will forever be a fad. A place to tell the world what you've had for lunch.

Yet though its user base is dwarfed by Facebook, no social network has quite the influence of Twitter.

So, what better way to assess its impact than with one of its strongest conventions - the hashtag.

Before Twitter, the # key was little more than something found on telephones to denote "number".

Now hashtags are now the definitive way to group tweets on the same subject.

Here, hashtag-by-hashtag, is a selection of other ways Twitter has changed the world.

Send a letter of complaint, wait 28 days, get fobbed off, feel oh so alone.

That was the old way, but now we can whinge, in real time, at companies if they're not up to scratch - and firms live in fear of a complaint going viral.

Press offices around the world dread a Twitterstorm, a wave of negative tweets, that can deeply embarrass a firm.

It can be a remarkably effective way of making a company change its policy.

Whether it's getting rid of offensive t-shirts, or forcing "gay best friend" dolls to be removed, there's no faster way for consumers to well and truly kick off.

Meanwhile, on the financial markets, many have started using social media to predict the future value of businesses.

By analysing the "firehose" (that is, all the tweets from everyone), researchers say they can make an educated guess over how stocks may perform - sometimes up to six days in advance.

But since then he's joined the service, as have most leading politicians.

Twitter has cemented itself as a digital soapbox, and a place for politicians to engage directly with people - making major announcements along the way.

Social media - not just Twitter - is so important to politics that ahead of his re-election, US president Barack Obama hired a specialist team dedicated to analysing tweets and status updates across America.

When he won over Republican rival Mitt Romney, it was this tweet of President Obama hugging his wife that broke records as the most retweeted ever.

Another oft-retweeted classic came via shadow chancellor Ed Balls who, while trying to search for mentions of himself, accidentally tweeted, simply: "Ed Balls". Now, every year, thousands come together to mark the event by celebrating Ed Balls Day, a nationwide in-joke that the MP describes as "baffling".

Twitter can't win elections on its own, of course, but it is arguably one of the most effective campaign tools - particularly in reaching voters that are unlikely to pay attention to a party political broadcast.

But there is scope for abuse. The temptation for political movements to "astroturf" - paying people to support a cause as if they were a genuine devotee - is expected to rise as social media becomes ever more powerful.

There's no denying it: the biggest news often breaks first on Twitter.

Be it a tweet about the raid that discovered Osama Bin Laden, or a plane on the Hudson River, tweets are regularly the starting point for news stories - even if, as is often the case, the story is about a celebrity's bum.

Newsrooms the world over have taken to social media, using it as both a source, but also a broadcast platform. Newsrooms are awash with positions that simply didn't exist five years ago.

In fact, social media has become so important to journalists that sometimes they need to be reminded not to give stories away. "Always pass breaking news lines to the news desk before posting them on social media networks," read one email from editors at Sky News to their staff.

The real challenge, of course, is to make sure what is tweeted is in fact true - and news organisations don't always get it right.

Everything from doctored photographs to fake accounts can cause havoc if not properly verified. One famous example involved Wendi Deng, former wife of Rupert Murdoch, who was cited by many sources as saying various things on Twitter - despite the fact it wasn't actually her.

Twitter also has a habit of killing people off. Hugh Hefner, Jon Bon Jovi and Morgan Freeman have all met their grisly ends on Twitter, only to rise from the dead not long after.

Actor Jeff Goldblum has had the worst of it - rumours of his death reached such a level that he was compelled to appear on American television to cheerfully deliver his own eulogy.

"No one will miss Jeff Goldblum more than me," he said. "He was not only a friend and a mentor, but he was also... me."

It would be cruel, but not without some merit, to suggest that a large number of footballers are better seen and not heard.

Nevertheless, in the English Premier League (#EPL), all 20 clubs are now on Twitter, with more than half of all first-team players having verified accounts.

It means that fans are closer than ever to their heroes. Too close, you may wonder, when you see a tweet from Manchester United and England striker Wayne Rooney about his new hair ("Mane United," harked The Sun). Or another sharing a great big hole in his head.

Still, while fans and journalists alike have lapped up this new direct access, it's not been all good news for footballers: many have fallen foul of what they've tweeted, including Rooney, who got a telling off after tweeting about Nike without making clear it was a paid advertisement. Others have been fined by their clubs and the Football Association for careless tweets.

It's sporting events which bring people together on Twitter like none other. Take Andy Murray's Wimbledon win, for instance: 3.4 million tweets about it in less than 12 hours. Ace.

The first Twitter user to reach a million followers was US actor Ashton Kutcher, back in April 2009.

At the time of writing, it's singer Katy Perry who is the site's most popular user, with more than 46,700,000 followers.

The point here is that celebrities on Twitter are huge, and can perhaps be credited with bringing a more mainstream audience to the service.

In one decidedly non-scientific study of so-called influence, it was celebs - mainly members of boyband One Direction - that were considered the most influential of all on the platform - more so than world leaders.

For the A-listers, maintaining such large followings has its downsides - many big-name celebs are often forced to hire teams to tweet on their behalf.

To the delight of tabloid newspapers the world over, celebrities often deliver front pages thanks to Twitter, such as comedian Jason Manford, who quit his job presenting The One Show after he used the service to send "inappropriate" private messages to female fans.

Since 2012, Laura Bates - a feminist writer who lives in London - has run the Everyday Sexism project, an attempt to log instances of sexist behaviour in normal day-to-day life.

Her movement was the driving force behind a successful campaign to get Facebook to remove pages on its network that made jokes around themes of sexual violence. It was on Twitter that followers of Laura's account were able to target some of Facebook's biggest advertising clients, such as Dove and American Express.

Other campaigns have been waged against cyberbullying, a recurring problem for Twitter. Earlier this year, several prominent women received bomb threats and other violent abuse for speaking out against some attitudes online.

The actual impact of social media protests - be it on Facebook, Twitter or otherwise - is open to interpretation. In an essay for The Atlantic, Twitter co-creator Biz Stone likened its contribution to activism as being like a flock of birds - no set leader, but still a powerful, nimble group.

He also talked about the use of Twitter in China, which despite being blocked, is accessed by activists in the country via proxy networks and other government-evading techniques.

During the Egyptian uprisings, Twitter was a key channel for protestors to disseminate material, and to also organise gatherings.

When the Royal Shakespeare Company announced that it was using Twitter to put out a production of Romeo and Juliet, one culture writer at the Guardian said she sympathised with anyone whose heart sank; deflated that a organisation built upon the flowing prose of Shakespeare was now crowbarring the same play into 140-character-sized chunks.

Of Twitter, AL Kennedy wrote: "It seems to represent the worst of the boiled-down, sound-bitten, gadget-ridden, contentless, dehumanised, celebrity-obsessed swamp we seem condemned to inhabit."

But, she then admitted, she tweets. Why? Because Twitter and the Arts are seemingly perfect bedfellows: be it for publicising and discussing great works, or even creating new ones.

Twitter has made consuming the arts a shared experience.

Television executives the world over are implementing ways to make the most of the "second screen" - your mobile or tablet - while watching their content. Often this is being seen as a way to fling more adverts at you.

Some worry that the format lends itself to dumbing down - but it could be argued that accounts such as @samuelpepys, which tweets the diarist's words, bring classic and important works to new audiences.

Satire, another vital part of society's wellbeing, thrives on social media. The best even get their own book deals - such as @CherylKerl and @Queen_UK.

If you have to explain a joke, it ceases to be funny. And if you're Paul Chambers, it also sets off a lengthy court case and means you lose your job.

His tweet, in which he joked he'd blow an airport "sky high" if it didn't reopen in time for him to get a flight, saw him in court after police said he had sent a "menacing electronic communication".

More than two years later, he had a conviction overturned after an appeal - gaining support from various high profile celebrities, including actor Stephen Fry.

Many argued that #TwitterJokeTrial - as it became known - was an example of outdated laws being applied to new and evolving communication platforms.

Also causing legal headaches in the Twitter-age is the increasing fallibility of the injunction - a legal method of keeping something, for a variety of reasons, out of the press.

In times past, injunctions would be granted by judges, forbidding the press to report whatever information it covered, and that would be that. But now, anyone can go on Twitter and break it - and once the information is out there, it's very hard to put a lid on things.

The footballer, who had had an affair with glamour model Imogen Thomas, had obtained an injunction against mentioning him in the press. Unfortunately for him, the Twittersphere had other ideas - tweeting his name with no regard for the law.

What followed was something of a farce - newspapers were gagged from reporting his name, despite thousands talking about it online.

Mr Hemming was called irresponsible by some, while others argued that it was an exercise in common sense.

The law, meanwhile, has yet to catch up.