Plans for a £33bn high-speed rail network have received a mixed reaction, after being approved by the government.

The British Chambers of Commerce said the plan would be welcomed by "businesses up and down the country".

But critics say the route will damage the environment and dispute projected benefits of up to £47bn, describing the scheme as a "white elephant".

Transport Secretary Justine Greening said she had agreed to a new "railway revolution in Britain".

"A modern and reliable and fast service between our major cities and international gateways befitting the 21st Century will transform the way we travel and promote Britain's economic and social prosperity," she said in a statement to the House of Commons.

Ms Greening said there would be extra tunnelling along the 140-mile (225km) first phase in an attempt to offset environmental concerns.

Phase one of HS2, between London and Birmingham, should be running by 2026, later extending to northern England, she said.

That will be followed by a second phase of the Y-shaped route reaching Manchester and Leeds by about 2033.

A consultation on the second phase will begin in early 2014, with a final route chosen by the end of that year.

A parliamentary vote on the scheme is not likely until 2013 or 2014, but the government would win any vote as the line is backed by the opposition Labour party, which first proposed the project before it was ousted from power.

But shadow transport secretary Maria Eagle said she wanted to see a commitment now for the second phase of the line.

"While I welcome the commitment given today to the whole HS2 scheme, there will be disappointment that the government's announcement has stopped short of a commitment to legislate for the entire route to Manchester and Leeds in this Parliament," she said.

Our correspondent said the decision was far from being a done deal.

He says he has been speaking to opponents who are considering legal action to slow the process through the courts until the government simply gives up.

Stop HS2 campaign co-ordinator Joe Rukin said: "There is no business case, no environmental case and there is no money to pay for it.

"It's a white elephant of monumental proportions and you could deliver more benefits to more people more quickly for less money by investing in the current rail infrastructure."

Craig Bennett, director of policy and campaigns at Friends of the Earth, said: "We need to revolutionise travel away from roads and planes, but pumping £32bn into high-speed travel for the wealthy few while ordinary commuters suffer is not the answer.

"High-speed rail has a role to play in developing a greener, faster transport system, but current plans won't do enough to cut emissions overall - ministers should prioritise spending on improving local train and bus services instead."

"If she (Ms Greening) had taken a cold, hard look at HS2, she would see that it is a disaster waiting to happen," he said.

But John Longworth, director general of the British Chambers of Commerce, said: "Britain cannot continue to 'make do and mend' when it comes to its substandard infrastructure.

"Fundamentally, our global competitiveness is at stake."

Stephen Joseph, chief executive of Campaign for Better Transport, said: "We're pleased to see the government investing in rail, rather than roads and aviation, and acting on some of the local environmental concerns surrounding HS2."

Earlier, Ms Greening faced a mixed response to the announcement from a number of MPs from her own party.

Stuart Andrew, MP for Pudsey, described HS2 as "good for Britain" while Andrea Leadsom, MP for South Northamptonshire, said many of her constituents' communities would be "blighted".

Travelling at speeds of up to 250mph, passengers will be able to commute from Birmingham to London in 49 minutes, reducing the journey time by almost half from one hour and 24 minutes.

Connections to existing lines should then cut journey times between London, and Edinburgh and Glasgow, to three-and-a-half hours.

The first phase of HS2 will include a connection to mainland Europe via the Channel Tunnel. On completion of HS2 the network will include a direct link to Heathrow.

The government estimates that the project could eventually result in 9 million road journeys and 4.5 million journeys by plane instead being taken by train every year.

There had been almost 55,000 responses to the consultation process on the project, which clearly "generates strong feelings, both in favour and against the scheme", Ms Greening said earlier.

She has pledged to write to "all the people" directly affected by HS2. 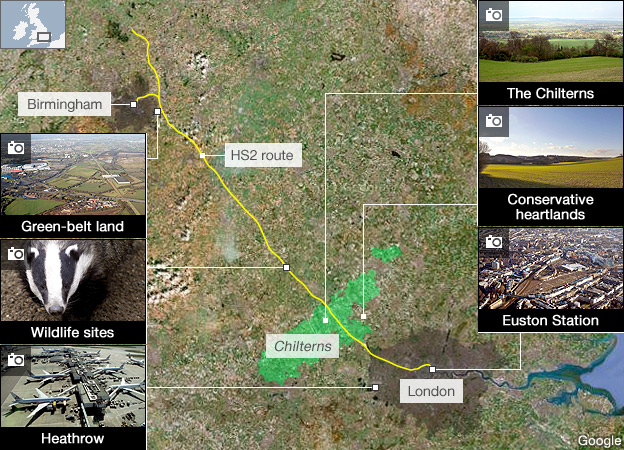 The planned route encroaches on green-belt land in a number of areas, including around London and Birmingham.

The Campaign to Protect Rural England argues plans for new out-of-town parkway stations would have a "devastating" effect on green belt and that the economic benefits would be a fraction of those that would be achieved from town centre stations.

The campaign group wants, in particular, changes to the proposed Birmingham interchange station, which it says will "encroach into the green belt next to Birmingham Airport".

County wildlife trusts are concerned the proposed route will pose a threat to wildlife. They estimate more than 150 nature sites could be affected, including 10 Sites of Special Scientific Interest (SSSIs).

The government has said that extra tunnelling and route amendments mean that the impact of more than half the route will now be mitigated. However, the wildlife trusts say this could actually make the damage to wildlife worse.

The second phase of the government's plans include a possible future spur to Heathrow Airport in west London.

The HS2 line from London to Birmingham is expected to open in 2026, followed in 2032-33 by high speed links to Manchester, Leeds and Heathrow.

However, in November, the Commons Transport Committee said a case for routing HS2 via Heathrow had not been set out clearly and needed further analysis.

Labour, which supports HS2, has suggested the first phase main route should actually travel via Heathrow, creating a hub at the airport and thus making it easier for travellers from south-west England to get on fast trains to the north. It would also protect the most sensitive parts of the Chilterns, the party says.

The government was due to make an announcement on HS2 in December, but delayed it to incorporate miles of extra tunnelling to try to appease opponents. It has added 7.5 miles of tunnelling and 3.5 miles of deep cuttings along the 13 miles of proposed line through the Chilterns AONB.

The Campaign to Protect Rural England has said additional tunnelling would be "essential" if HS2 is to be built through the area.

A number of Conservative MPs have expressed concerns about the rail link, which passes through Tory heartlands. Welsh Secretary Cheryl Gillan has been one of the most vocal Conservative critics and says she is prepared to resign over the project that cuts through her Chesham and Amersham constituency.

To try to win over critics, ministers have added a overall total of eight miles of tunnelling along the route - mostly in the Chilterns. The changes include extended tunnelling near Amersham, in Mrs Gillan's constituency, near Ruislip in north-west London, Turweston and Wendover in Buckinghamshire, Greatworth, Chipping Warden and Aston le Walls in Northamptonshire, and Long Itchington Wood in Warwickshire.

Campaigners fear the planned remodelling of Euston Station will lead to disruption that could last for many years.

Last year, a study from The TaxPayers' Alliance said passengers would face slower and less-frequent services if the scheme went ahead. Creating the London to Birmingham HS2 would mean Euston station in London "becoming a building site for seven years", it said.

Labour's Frank Dobson, MP for Holborn and St Pancras, told MPs the station was already overcrowded and lacked the infrastructure in surrounding streets to be the terminus for a high-speed rail link. The proposals would also mean the demolition of the homes of more than 350 of his constituents, he said.

The government has said its revised route halves the number of homes affected.

Changes to the plans, she said, meant that "more than half the route will now be mitigated by tunnel or cutting", including:

The Department for Transport (DfT) said that 22.5 miles of the first phase would now be enclosed in tunnels or green tunnels - up from 14.5 miles for the route that went to consultation - and a further 56.5 miles of cuttings would significantly reduce "visual and noise impact".

A green tunnel is where a line is built in a deep cutting and covered with a "roof" which is planted with grass to disguise the line and make it blend in with environment. It can help maintain local access, minimise noise and visual impact.