The number of people infected by the coronavirus in the UK has doubled to eight - after four more patients tested positive for the virus.

It comes as the government issued new powers in England to keep people in quarantine to stop the virus spreading.

In order to do this the Department of Health has described the coronavirus as a "serious and imminent threat" to public health.

The overall risk level to the UK remains "moderate".

There have been more than 40,000 cases of the virus globally, mostly in China. The total number of deaths in China is now 908.

The new cases are all linked to a British man who caught the virus at a conference in Singapore and travelled to a ski resort in France. He was diagnosed in Brighton, and is being treated at St Thomas' Hospital in London.

He is also linked to the fourth UK patient, who was exposed to the virus in France, while five British nationals tested positive in France following his trip to the ski resort.

Chief medical officer for England Prof Chris Whitty said the new cases have been transferred to specialist NHS centres at Guys' and St Thomas' and the Royal Free hospitals in London.

A University of York student and their relative, still being treated at the Royal Victoria Infirmary infectious diseases centre in Newcastle, have not been connected to the cluster of UK cases.

Is the Brighton man a 'super-spreader'?

This looks a lot like a "super-spreading" event. It is likely another British national diagnosed in Majorca is also connected to the Brighton man.

This is not unusual in outbreaks.

In Mers-coronavirus, a super-spreading event led to 82 people being infected.

History has demonised the super-spreader. Irish cook Mary Mallon (1869-1938) is remembered as "Typhoid Mary" after unknowingly passing on the disease when she had no symptoms. She spent decades in exile and forced quarantine.

But in reality it's not the patient's fault.

Having no symptoms, making unusually large amounts of virus or mixing with lots of people can all lead to super-spreading.

Where had the Brighton coronavirus patient been?

The British man visited Singapore on business from 20 to 23 January, before staying at a chalet in the Alpine resort area of Les Contamines-Montjoie near Mont Blanc.

He flew back to the UK from Geneva on 28 January, easyJet confirmed.

Four adults and a nine-year-old child were subsequently diagnosed with the virus after coming into contact with him. They are not in a serious condition.

EasyJet said in a statement on Monday that health officials are trying to trace other passengers on flight EZS8481 to London Gatwick who might be at risk.

On his return to the UK, the Brighton man visited The Grenadier pub in Hove.

What are the latest regulations in the UK?

On Monday, the Health Secretary Matt Hancock announced new regulations in England as "the transmission of coronavirus would constitute a serious threat".

Under the Department of Health measures people will not be free to leave quarantine, and can be forcibly sent into isolation if they pose a threat.

Arrowe Park Hospital, on the Wirral, and Kents Hill Park conference centre, in Milton Keynes, have been designated as "isolation" facilities in the UK.

Evacuees from Wuhan who travelled to the UK on two flights chartered by the Foreign Office are currently in quarantine at the locations.

The BBC's political correspondent Iain Watson said the measures were announced because a passenger on the first UK flight from Wuhan, who is currently being held in quarantine on the Wirral, "is threatening to abscond" despite signing a contract agreeing to the isolation period.

He said the regulations were brought in "to try and compel him to stay put". 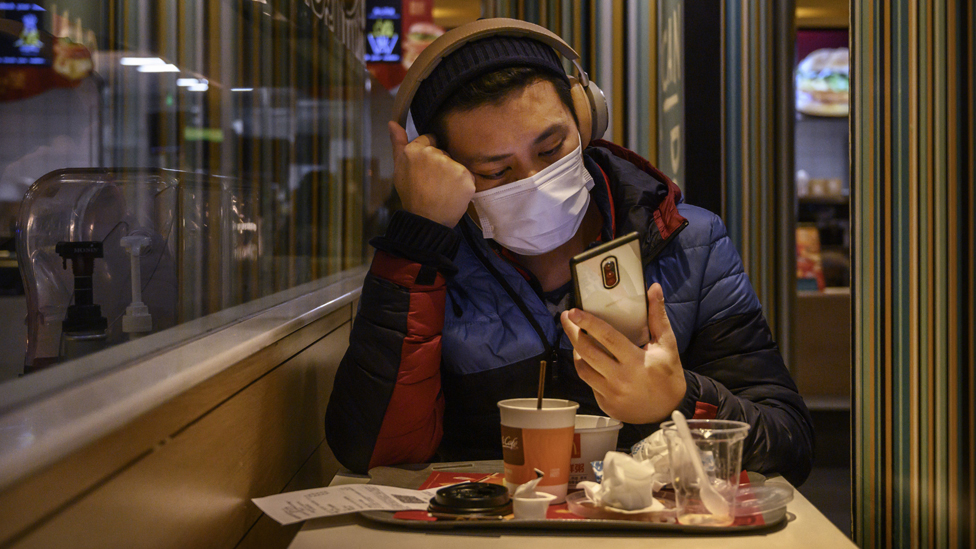 A statement on the Department of Health website said "incidence or transmission of novel coronavirus constitutes a serious and imminent threat to public health".

On Twitter, the department added that the announcement on the coronavirus threat was "a legal term... as part of changes to make it easier for health professionals to do their job".

A government spokesman said: "We are strengthening our regulations so we can keep individuals in supported isolation for their own safety and if public health professionals consider they may be at risk of spreading the virus to other members of the public."

Why have they issued this advice?

Tackling the coronavirus threat has taken the government into uncharted territory. Quarantining hundreds of British citizens for two weeks has never been done on this scale in modern times.

Whitehall sources say the latest Department of Health announcement on the virus threat covers the tightening of some regulations to help enforce quarantine powers.

This gives legal underpinning to the quarantining of people back from Wuhan in Milton Keynes and the Wirral.

They all signed contracts committing to the 14-day isolation but it's understood that more rigorous regulations are needed to ensure people stay the course.

This is not a ramping up in official warnings to the wider public. The language used in the official release describing an "imminent threat" was over dramatic and confusing and probably there only for obscure legal reasons.

The actual threat level announced by Public Health England a couple of weeks ago remains moderate.

The majority of cases are in China, where 40,171 people are infected.

The new virus was first reported in Wuhan, the capital of Hubei province. The city of 11 million has been in lockdown for weeks.

The outbreak was declared a global emergency by the WHO on 30 January.

It is estimated that 1% of people infected with the new coronavirus may die, according to a report by the World Health Organization Collaborating Centre for Infectious Disease Modelling.

Prof Neil Ferguson, of Imperial College London, said the estimate suggests the impact of the epidemic "may be comparable to the major influenza pandemics of the 20th Century".

Meanwhile, there are now 130 confirmed cases of coronavirus on the quarantined Diamond Princess cruise ship in the port of Yokohama.

What should I do if I suspect I have coronavirus?

The coronavirus causes severe acute respiratory infection and symptoms usually start with a fever, followed by a dry cough.

Most people infected are likely to fully recover - just as they would from a flu.

Anyone who has travelled to the UK from mainland China, Thailand, Japan, Republic of Korea, Hong Kong, Taiwan, Singapore, Malaysia or Macau in the last 14 days and is experiencing cough or fever or shortness of breath, is advised to stay indoors and call NHS 111, even if symptoms are mild.

People who suspect they have the virus are asked to take steps to avoid close contact with other people as much as possible, as they would do with other flu viruses.

Are you or any of your family members involved in the quarantine process? Share your experiences by emailing haveyoursay@bbc.co.uk.