Rising numbers of migrants are trying to cross the English Channel in dinghies and other small boats.

Who are they and why do they make the journey?

How many people are trying to make the crossing?

This year, almost 4,000 people have crossed the English Channel, in more than 300 small boats. There was a new record of at least 235 arrivals on 6 August.

The numbers attempting the crossing are higher - but some boats are intercepted by the French authorities before they reach British waters.

The boats tend to be small dinghies that are overcrowded. The passengers sometimes include babies and children - and they're crossing one of the most dangerous and busy shipping lanes in the world.

Under international maritime law, people at risk of losing their lives at sea must be rescued.

How many migrants arrive in the UK each year?

There were also 49,000 asylum applications.

As such, the 4,000 unauthorised Channel arrivals are equal to less than 1% of all immigrants last year.

The number of asylum seekers arriving and applying to stay in other European nations is far, far higher than in the UK. Last year, some 165,600 sought asylum in Germany, 129,000 in France and 118,000 in Spain. 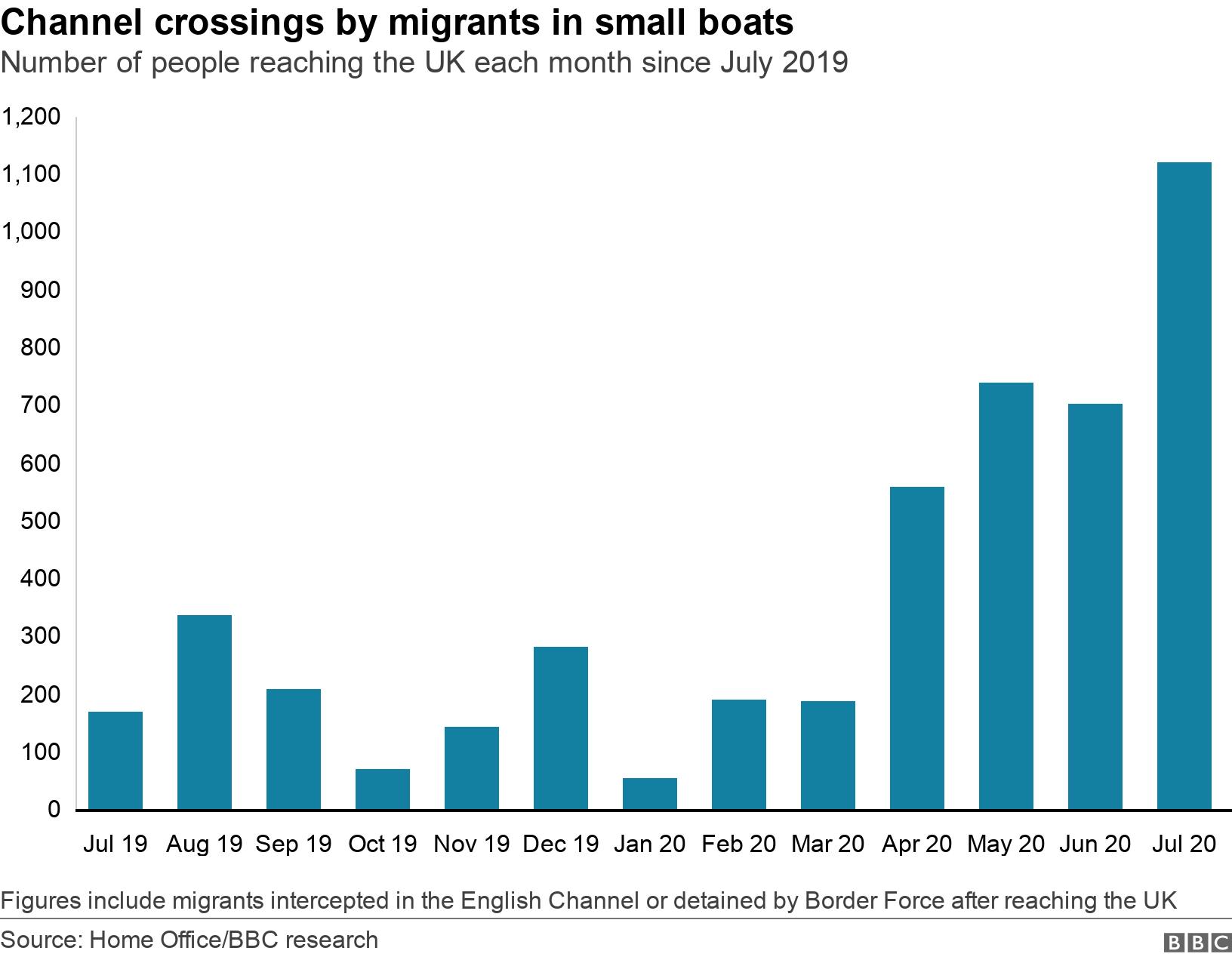 Where do the Channel migrants come from ?

In short, the poorest and most chaotic parts of the world. Recent arrivals have included entire families from Yemen, Eritrea, Chad, Egypt, Sudan and Iraq.

Many ask to claim asylum once they are picked up by the UK authorities.

Others are economic migrants who have no real claim for refuge. They are seeking to work in the UK without applying for a visa because they think it is better than staying in their homelands.

Why are they making the Channel crossing?

Over the last 20 years, organised crime gangs have created an entire industry in smuggling people from Asia and Africa across Europe. Families sometimes save up huge sums to send just one relative to Europe.

In the case of refugees, it's very hard to apply for asylum to the UK unless you are already in the country. The British border controls for the Channel are in the Port of Calais - which has high security.

For years, people smugglers have organised sending people across the Channel in trucks. They included the 39 Vietnamese people found dead in a refrigerated lorry last October.

As port security has been tightened, more attempts have been made to send people by boat.

Should they not stay in France or another country?

It depends. Under a long-standing European Union deal, called "Dublin III", the UK has the right to send back anyone who is seeking asylum if they could have reasonably claimed it in another country along the way.

That arrangement will end at the end of the Brexit transition period - next January - unless the UK and the EU agree a similar deal.

Other arrivals may have a stronger case to apply for asylum in the UK because they have relatives here already.

What happens to them in the UK ?

When migrants are picked up crossing the Channel, they are typically taken by the UK Border Force to short-term holding centres.

If someone makes an asylum claim, and they have no money, they might then be placed in accommodation anywhere in the UK. This is paid for by the Home Office while the application is considered.

Others might be kept in detention ahead of a plan to send them back to Europe.

How many migrants are sent back?

Since January 2019, about 155 migrants who crossed the English Channel have been returned to mainland Europe.

Priti Patel, the UK Home Secretary, recently told MPs another 166 were ready to be returned and officials had asked Europe to receive almost 600 more.

Refugee and migrant charities however say the system is deeply unfair. They say people are regularly selected for removal from the UK when they may have a reasonable claim to stay on.

What is the government doing about the crossings?

Priti Patel says the UK is seeking more cooperation from the French to intercept boats - or to stop them from leaving in the first place.

The influential Home Affairs Committee in Parliament is launching an inquiry into how well the UK and French governments are working together.

Critics say that much more needs to be done to prosecute people smugglers on both sides of the Channel.

Charities that support migrants say that if the government made it easier for people to seek asylum in the UK, the numbers of illegal crossings would fall.