With the UK set to leave the EU, how will Brexit affect you? We answer readers' questions on pet passports, citizens' rights, pensions and more.

What are the rights of British expats living in the EU? - Eliza Ward, Brittany, France

UK citizens resident in an EU member state, plus Switzerland, Iceland, Lichtenstein and Norway before the transition period ends on 31 December 2020 will be able to continue to live and work there.

The transition is the time between 31 January and 31 December 2020 when UK and EU negotiators aim to agree the detailed terms of the new relationship.

UK nationals should register as a resident in the country where they reside.

Different EU countries have their own rules on how to apply for permanent residence.

The UK government website provides country-by-country guides on what to do.

Do I need a European licence to drive in Europe during the transition period? - Eleanor Inch, Deal, Kent

No. UK driving licences will still be valid for visiting EU member states, Switzerland, Iceland, Liechtenstein and Norway up to 31 December 2020.

What happens next will depend on what comes from negotiations on the future relationship between the UK and the EU.

But after transition, UK motorists may need an International Driving Permit (IDP) to drive in these countries.

Different states have different requirements, which you can find here.

Is the pet passport for my dog still valid and are there likely to be any changes? - Stuart Burrows, Manchester

During the transition period, UK pet owners will be able to travel to the EU with their dog, cat or ferret, using a current UK-issued EU pet passport.

If your pet does not have a passport, you will need to visit your vet.

And dogs must be treated for tapeworm.

After the transition period, this may change.

I am French. Do I need to apply for settled status in the UK? - Olivier Thomas, London

The UK has its own EU Settlement Scheme.

Under this, EU citizens who have lived in the UK continuously for five years can apply for settled status.

This will entitle them to live and work in the UK, bring their family to the UK and apply for British citizenship.

Those who have lived in the UK for less than five years can apply for pre-settled status, granting many of the same rights as those with settled status.

This can be upgraded to settled status after five years' continuous residence.

Irish citizens are exempt from the scheme, as their rights are guaranteed in the UK.

EU citizens with only a permanent-residence document will need to apply for settled status, as will those falling into other categories.

When is the Brexit 'divorce bill' actually paid to the EU? - Shaun Curtis, Aberthin, Vale of Glamorgan

Under the terms of the UK's withdrawal agreement with the EU, it will make a series of payments.

This is known as the financial settlement or, more commonly, the Brexit divorce bill.

When the Brexit date was 31 October 2019, the Office of Budget Responsibility (OBR), the independent body that analyses government finances, estimated the bill was £32.8bn - lower than the £39bn figure suggested by the government in March 2019. 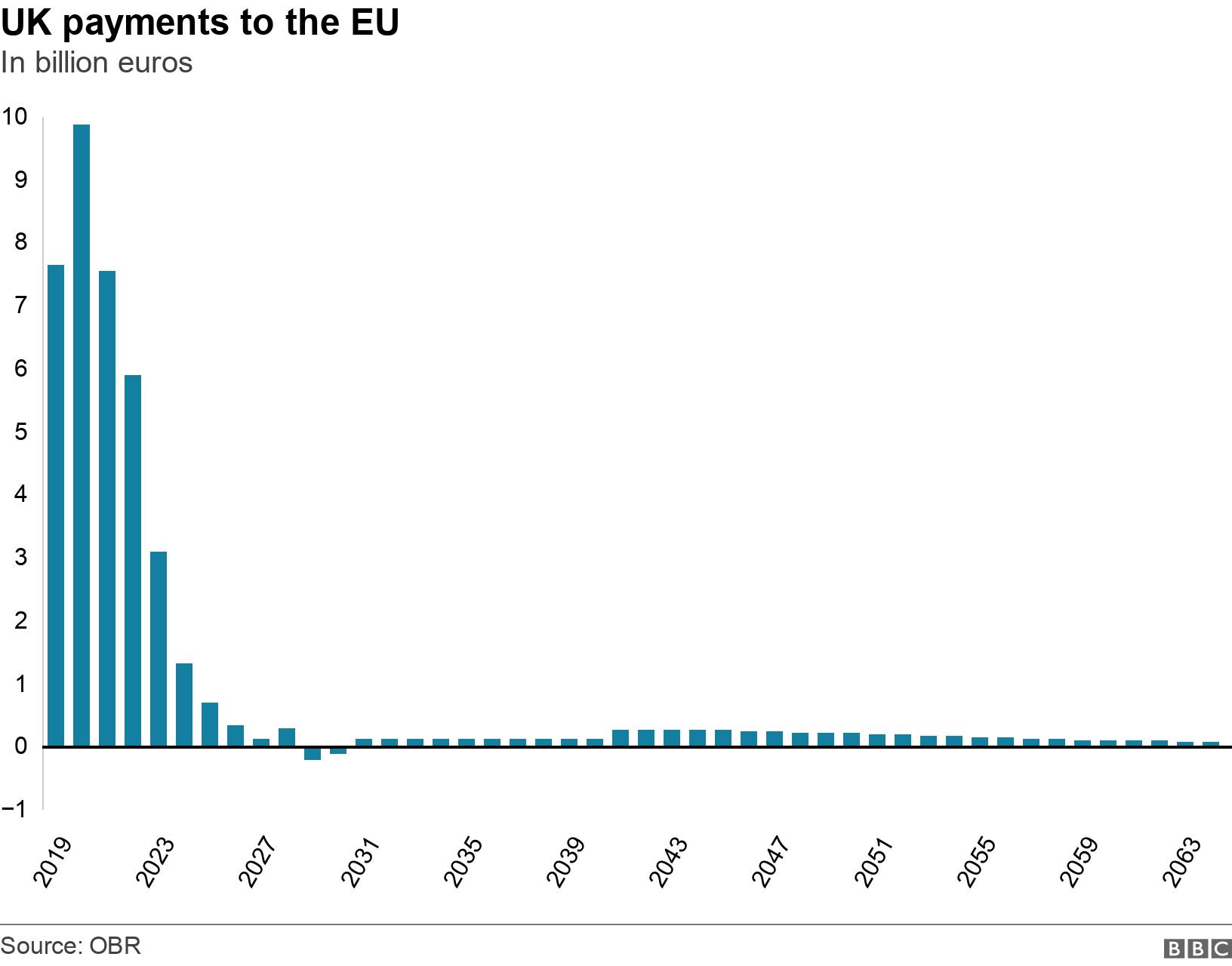 When Brexit was delayed - repeatedly - it meant some of that money was paid as the UK's normal budget contributions, so less of it was part of the divorce bill.

The OBR has yet to update the figure to reflect the new Brexit date, 31 January 2020.

But the BBC News Reality Check team believes it to be just under £30bn.

But some relatively small payments, mainly towards pensions for EU civil servants, will still be made until the 2060s.

I am going home to Lithuania in 2021, after working in the UK since 2005. Can I receive my UK state pension? - Antanas, Peterhead, Aberdeenshire

The UK has been increasing the pensions of those who live in the UK or the EU annually.

This is the so-called uprating.

The pensions go up by the rate of inflation, as measured by the Consumer Price Index, average earnings growth or a guaranteed 2.5% minimum, whichever is the greatest.

If you are living in the EU, EEA or Switzerland by 31 December 2020 you will get your UK state pension uprated every year for as long as you continue to live there.

This will happen even if you start claiming your pension on or after 1 January 2021, as long as you meet the qualifying conditions.

What happens if no deal is agreed with the EU by 1 January 2021 - Dilip Sharan, Bradville, Buckinghamshire

This is the big question.

An agreement would seek to create a whole new way of working between the UK and the EU.

It would cover a vast range of things from trade and food regulations to citizens' and workers' rights and cooperation on security and data protection.

Having no agreement would bring with it many potential difficulties.

For instance, UK trade with the EU would have to operate on World Trade Organization rules.

This would mean taxes and limits on goods coming into and out of the UK.

And travel between the UK and the EU would require more documents and checks.

If no agreement has been reached by the end of 2020, more time may be made available for negotiations.

But the UK's Withdrawal Agreement Act, now set in law, prohibits UK ministers from requesting any extension, unless the law is changed.

What questions do you have about Brexit and how it will affect you in the future?

In some cases your question will be published, displaying your name, age and location as you provide it, unless you state otherwise. Your contact details will never be published. Please ensure you have read our terms & conditions and privacy policy.

Your guide to Brexit jargon