With the UK heading for a general election on 12 December, what are the key questions facing each political party in Scotland?

Before we even get to the individual parties, it's worth noting the delicately-balanced picture across the country - in theory, almost every seat in Scotland is up for grabs.

It's not just North East Fife, where the SNP's Stephen Gethins has a majority of two. A dozen seats are truly marginal, with a majority of under 1% of the vote. Indeed, only 13 of the country's 59 seats have a percentage majority which is into double figures.

Scotland also has a high incidence of three-way marginals, where three parties are competitive (at least on paper).

This is very much a local phenomenon too. The House of Commons Library lists 38 seats UK-wide which it considered to be three-way marginals in 2017 - and 30 of them were in Scotland.

So tactical voting might end up playing a big role. Expect to see a lot of leaflets bearing bar-charts declaring that "only we can beat the SNP/Tories/Labour here".

This will sound obvious, but the big question for the SNP is how many people are going to vote for them.

They went from roughly half a million votes in 2010 to 1.5m in 2015, then back to a million in 2017. Against that fluctuating baseline, can party bosses reasonably expect their vote to go up, down, or stay the same?

With the SNP generally performing well in most polls, their big test is going to be getting the vote out - persuading people to leave the house on a cold December day and head to a polling station. The biggest issue the party faced in 2017 was voters staying home, rather than switching their allegiance.

An effective performance in the "ground war" of getting activists out knocking on doors is going to be vital - and at a time of year when there might be only six hours of daylight a day, particularly in rural seats. 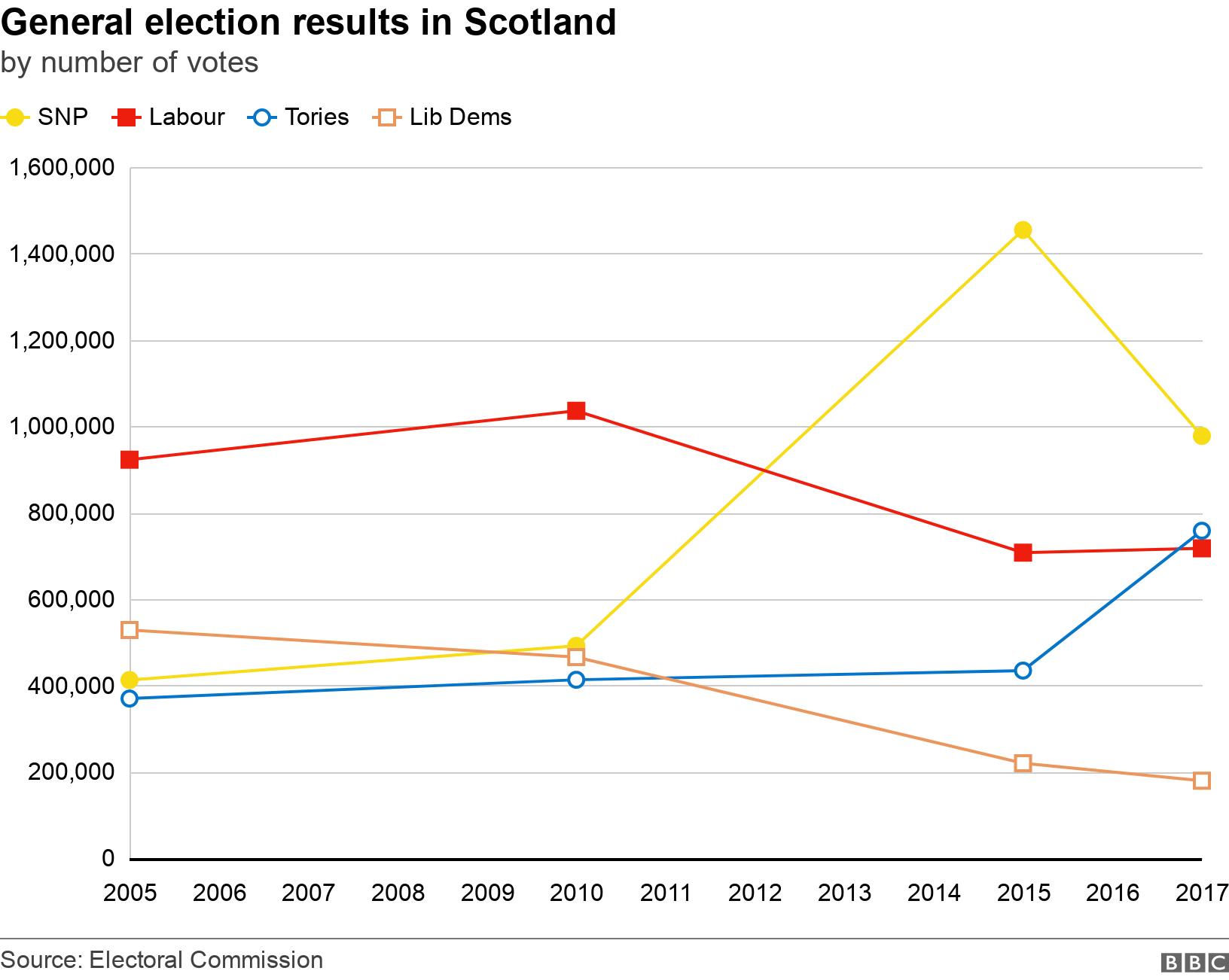 How the SNP do could ultimately tell us a lot about how the other parties are going to do, too.

In 2017, there were four different seats which other parties gained from the SNP despite going backwards themselves. Take for example Rutherglen and Hamilton West, where Labour managed to win despite shedding a thousand votes on their 2015 performance - they fell back, just not nearly as fast as the SNP, who lost 11,000 votes in the constituency.

One thing at least is already certain - the SNP's platform. There will be two messages: stop Brexit, and give us an independence referendum. The first is key to winning over floating voters, the second is key to turning out the party's base.

One question is how effective the latter will be, with the party having gone to that well in several consecutive elections now without actually coming any closer to delivering "indyref2".

After all, the party's platform in 2017 featured plenty of opposition Brexit and calls for indyref2. Have the constitutional politics moved on enough on both fronts to make a difference?

The Scottish Conservatives have already lost one important thing - their figurehead and leader, Ruth Davidson.

Their 2017 campaign saw them leapfrog Labour and gain 12 seats - their best performance in Scotland since 1983. But can they hold on to those gains without the woman who graced the front of every campaign leaflet?

On that front, Ms Davidson actually does still appear on some campaign literature, with the party unsure about whether the election might clash with a leadership campaign and wary of giving any particular candidate a boost - but this is unlikely to last long.

Mr Johnson is far more likely to feature from here on in, as is Michael Gove. With no chance of a new leader before polling day, the Scottish Tories will basically be following the UK Tory campaign, with an added dollop of "no to indyref2".

But will being the Boris Johnson Party cost them some tactical votes from more liberal unionists?

Take for example Gordon, the seat the Tories sensationally took from Alex Salmond in 2017 when the exit poll predicted it might be a gain for the Lib Dems, who had traditionally dominated it in the past.

Can Mr Johnson hold on to enough votes there, with the motivation of dethroning Mr Salmond gone?

The Conservatives also can't afford to shy away from the other constitutional issue, in what could well be the Brexit election. And for all that Scotland voted by 62% to Remain in 2016, there were still a million Leave voters.

The question is, can these Leavers be won over by Mr Johnson's promises to "get Brexit done"? Analysis at the time suggested that up to a third of them were SNP backers who prefer independence from the EU as well as the UK, and thus might be unlikely converts.

And will the Brexit Party run in enough seats to sweep up other Leave supporters?

The question for Labour in Scotland as across the UK is whether they can build on their performance in 2017, where they defied expectations to deny Theresa May a majority.

In Scotland, they picked up six seats but without actually gaining very many votes. Across the country as a whole, they made a net gain of 9,860 votes overall - and 6,976 of those were in Edinburgh South.

They will seek to push the message that this election is about choosing the next prime minister - will it be Boris Johnson, or Jeremy Corbyn?

And if the SNP campaign is about getting Mr Johnson out of Downing Street, Labour will argue that the best way to do that is to vote for Mr Corbyn.

Like the Tories, the Scottish Labour campaign will probably look an awful lot like the UK one, but with added critique of the SNP's record in government.

The only real difference between the two Labour campaigns on Brexit is that in Scotland there will be a bit more of a pro-European message, to suit the local electorate.

While the party as a whole is committed to holding a referendum on a renegotiated Brexit deal, Mr Corbyn hasn't committed to backing one side or the other - but Richard Leonard and his Scottish group are "wholeheartedly" backing Remain.

You can also expect the party to face scrutiny about the other constitutional question - would a Corbyn government agree to another independence referendum?

The Labour leader has been equivocal so far, refusing to actually block indyref2 but saying it wouldn't be a priority any time soon. Nicola Sturgeon has told him not to bother looking for SNP support for a minority Labour goverment if a referendum isn't on offer.

Mr Johnson is certainly already keen to capitalise on that issue, having said on three occasions now that the country could face two referendums in 2020 under Labour. Of course for roughly half the electorate in Scotland, that might be a selling point rather than a warning.

One party heading into the election on a relative high is the Liberal Democrats, who are hoping their anti-Brexit position could finally deliver the "fightback" that has failed to materialise at previous polls.

The Lib Dems have actually lost more votes in Scotland than any other party since 2010, losing more than half of their support chiefly due to their coalition pact with the Tories.

If they are now rehabilitated, post-coalition, that pro-EU position could potentially be a bigger threat to the SNP than any other party.

The Lib Dems have sought to out-Remain everyone else by pledging to actually cancel Brexit altogether, without a referendum, should they win a majority. Of course the caveat on the end there is key - even the most enthusiastic Lib Dems probably don't believe they're set to walk into Downing Street

One thing the party does lack is tasty target seats. They only finished as runners-up in one constituency in 2017 - North East Fife, where they lost out to the SNP by just two votes. If they are to make any other gains, they will have to come from third or fourth place to secure them.

One seat the party is noisily sizing up is that of SNP Westminster leader Ian Blackford, in Ross, Skye and Lochaber. They would dearly love to recapture the constituency formerly held by Charles Kennedy.

However if Mr Blackford's seat is considered winnable with a majority of 15.4%, might the SNP equally be eyeing Jo Swinson's seat in East Dunbartonshire, where she has a 10.3% lead?

The main question about other parties in this election is whether they'll show up or not. The 2017 poll in Scotland had fewer actual candidates than any other recent general election, with only 30 independents or representatives of parties outside the "big four".

To take one potentially important example - will the Scottish Greens turn up this time?

In 2017 they only ran candidates in three seats. The party insisted this was because they were targeting their resources at local elections, but opponents claimed they were giving the SNP a clear run without splitting the pro-independence vote.

And when it came down to it, there were five seats where the SNP won by a slimmer margin than the number of Green votes locally in 2015.

The party has claimed they'll offer "as many people as possible the opportunity" to vote for them. If there really are Green candidates this time around, standing on a pro-EU, pro-independence ticket, could that have an impact on the SNP vote?

The same question can be applied to the pro-Brexit parties and the Conservatives.

If the Brexit Party contest seats, are they going to take away Tory votes in crucial areas and let other parties come through the middle?

UKIP didn't pose much of a problem for the Conservatives in 2017, but that was before the Brexit Party came second in the European elections in Scotland.

As noted above, there is a question over whether they were aided by truly small-c conservative voters, or pro-independence types who don't like the EU.

But if this is really a Brexit election, then the party with the B-word in its name would presumably be a factor - if it appears on the ballot paper.