A third of people with confirmed Covid cases in Wales in the past week were unvaccinated, according to new figures released by Public Health Wales.

The figures also showed 99% of people who tested positive for Covid in the past week in Wales were under 60. Of these, 37% were unvaccinated.

Nearly 13% of hospital patients with confirmed Covid were unvaccinated.

PHW said the vaccines had helped keep Covid hospital numbers much lower during the third wave.

Although 80% of patients have been double-dosed with a vaccine, public health officials said this is not evidence that the vaccine is not working - and that vaccines keep 95% of people out of hospital.

Without its protection, the numbers in hospital would be far greater, they added. 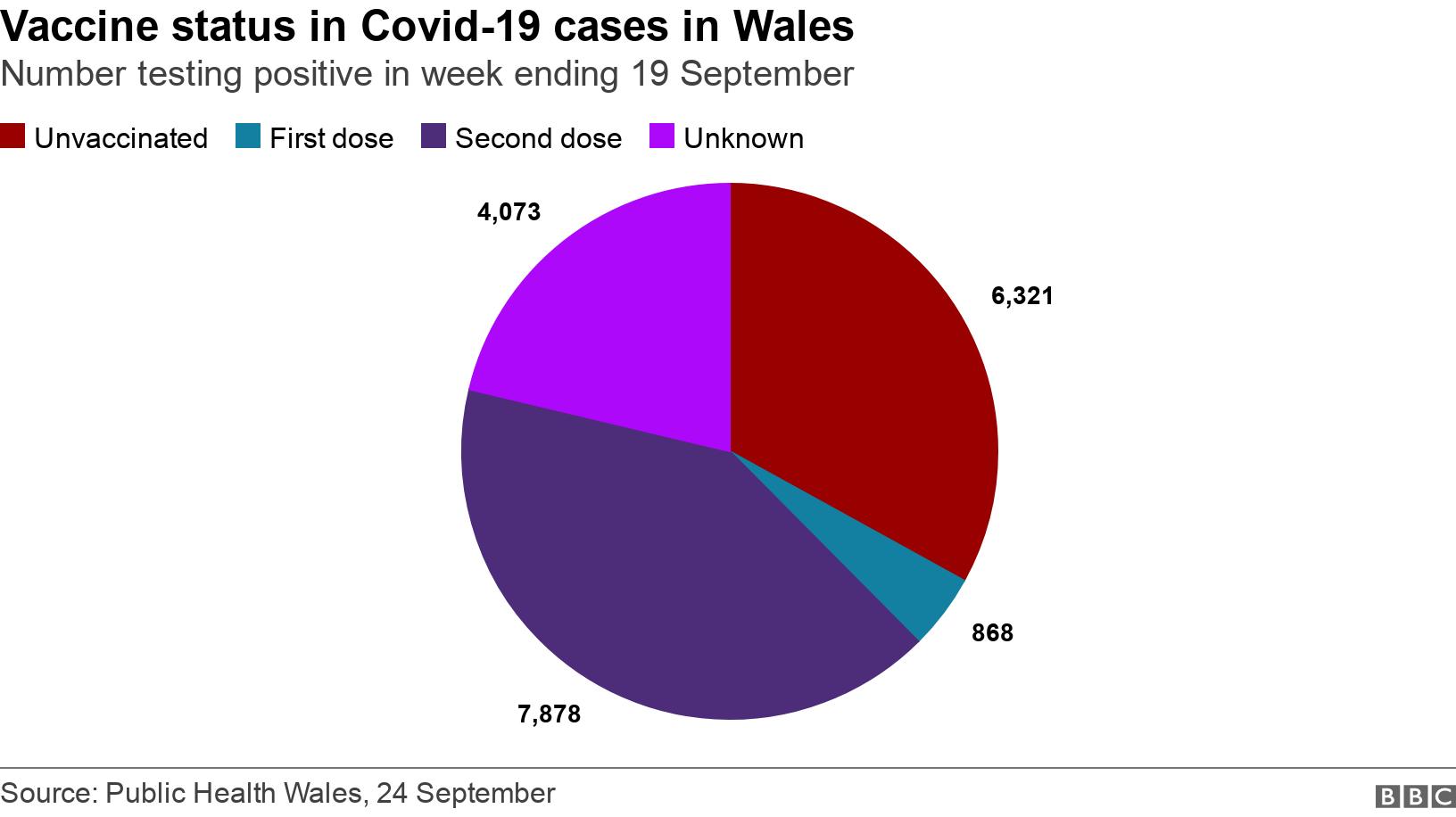 Why are so many vaccinated people in hospital?

The sheer numbers of people vaccinated - nearly 95% of those over 60 and 84% of those under 60 - mean that statistically, double-vaccinated people will still be a significant proportion of hospital patients.

But, without the vaccine, those hospital numbers might be even higher.

Last winter, when Covid cases in the community were similarly high but the vaccine programme had only just started, there were four times as many Covid patients in hospitals in Wales.

Vaccines, while helping protect many of us from serious illness, do not stop us catching Covid.

Many will get mild symptoms but for those in vulnerable groups, who may have other conditions or diseases, catching Covid could still lead to a complication.

Given the huge numbers of vaccinated people, especially among the older and vulnerable groups, it means statistically they will still appear in hospital figures. 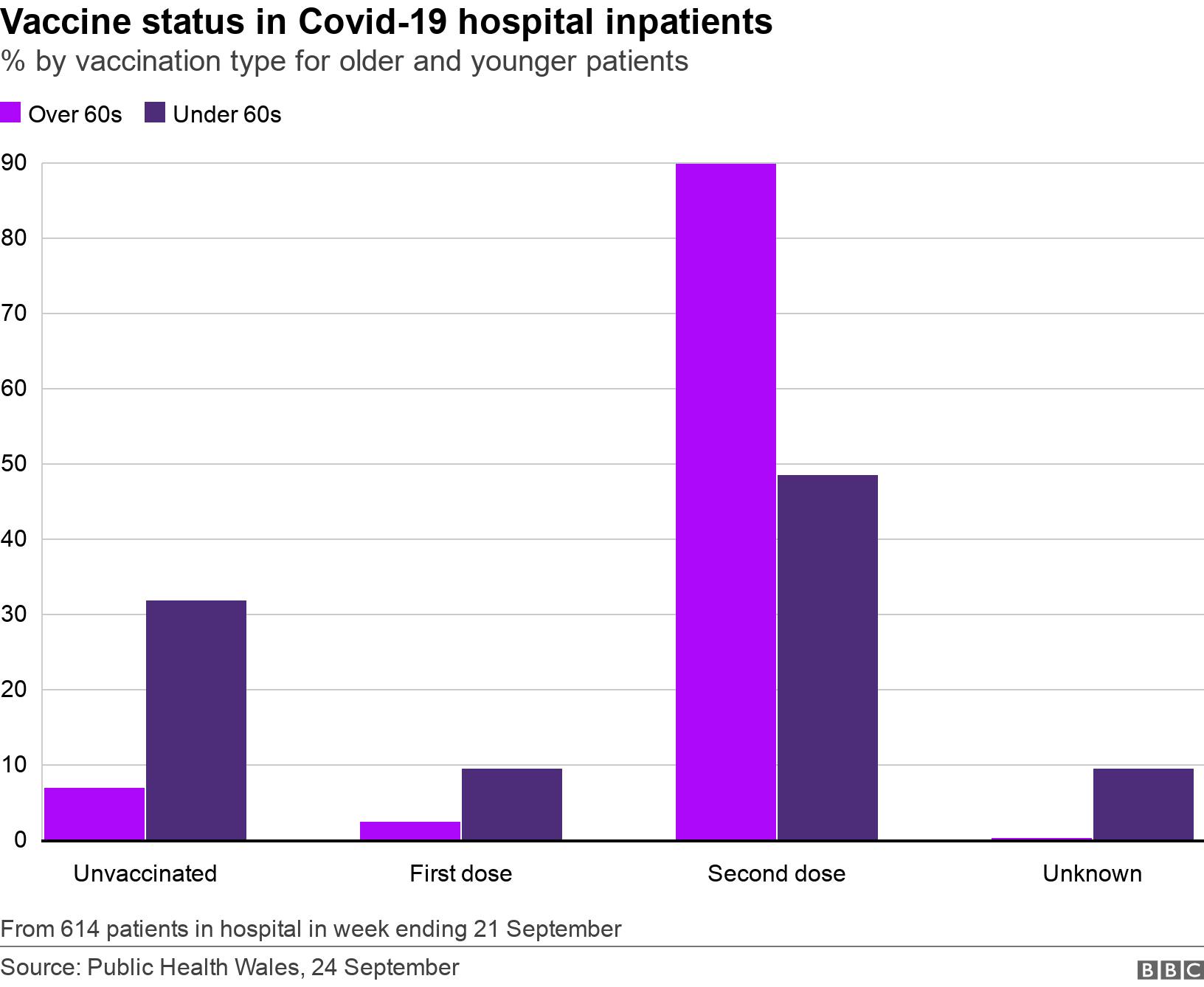 Dr Chris Williams, consultant epidemiologist for PHW, said: "A large majority of adults in Wales have now received two doses of coronavirus vaccine, so it is to be expected that a significant proportion of people in hospital will be fully vaccinated.

"Also, the majority of people in hospital are older.

What else do the figures show? 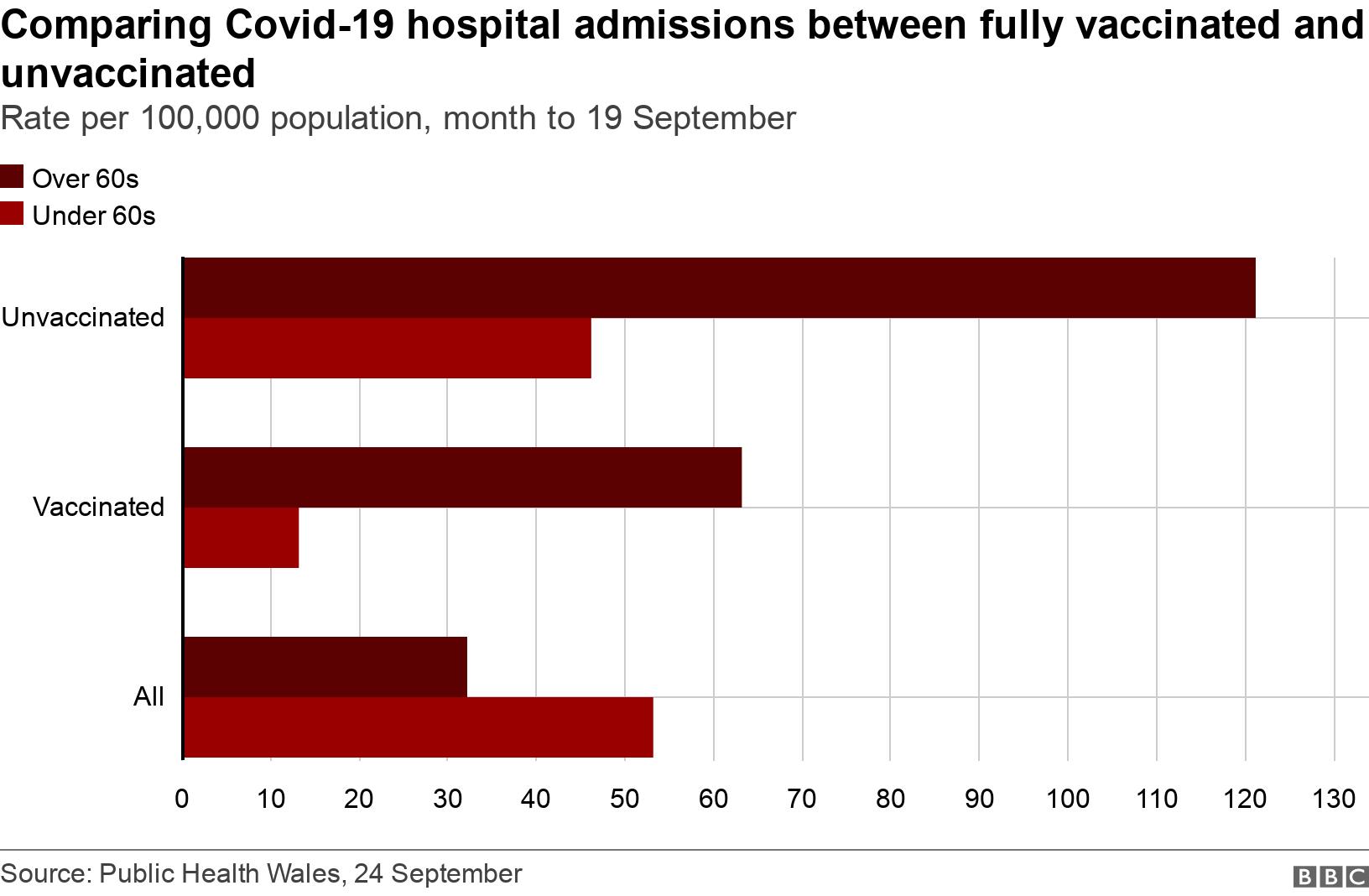 Dr Williams said studies consistently showed that vaccines reduced transmission, serious illness, hospitalisation, and death from Covid - and much lower rates of these in the third wave was evidence.

"The single best thing you can do to protect yourself, your loved ones and your community from Coronavirus is to take up the offer of a vaccine," he said.

What else have we learned today about Covid cases? 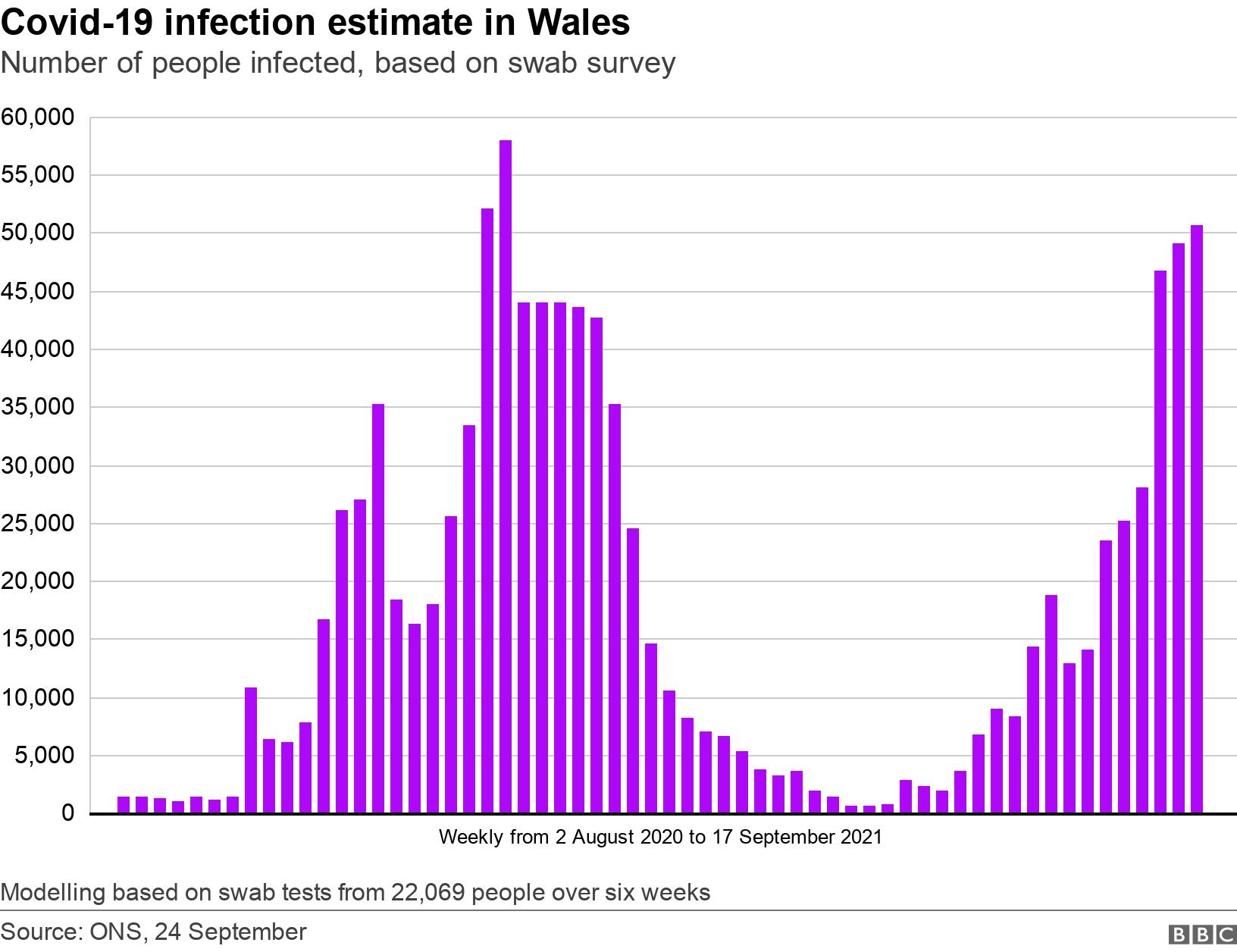 A slight rise in estimated infections

It is estimated 50,700 people have Covid-19 in Wales, according to the latest weekly swab survey by the ONS.

That is the equivalent of one in 60 people or 1.67% of the population.

This is a slight increase on the previous week's estimate that 49,100 people had Covid but the ONS said the trend was uncertain.

Latest modelling from scientific advisory body Sage, covering the next three weeks, estimates hospital admissions in Wales will fall from around 60 a day to 40 a day and deaths will fall to around five a day.

Modelling by Imperial College estimates that into early October, six out of Wales' local authority areas are likely to have case rates above 500 per 100,000.

Meanwhile, the R-number - the transmission rate - has fallen to a range between 0.8 and 1 for the first time since early August, indicating a slight fall or flattening of infections. 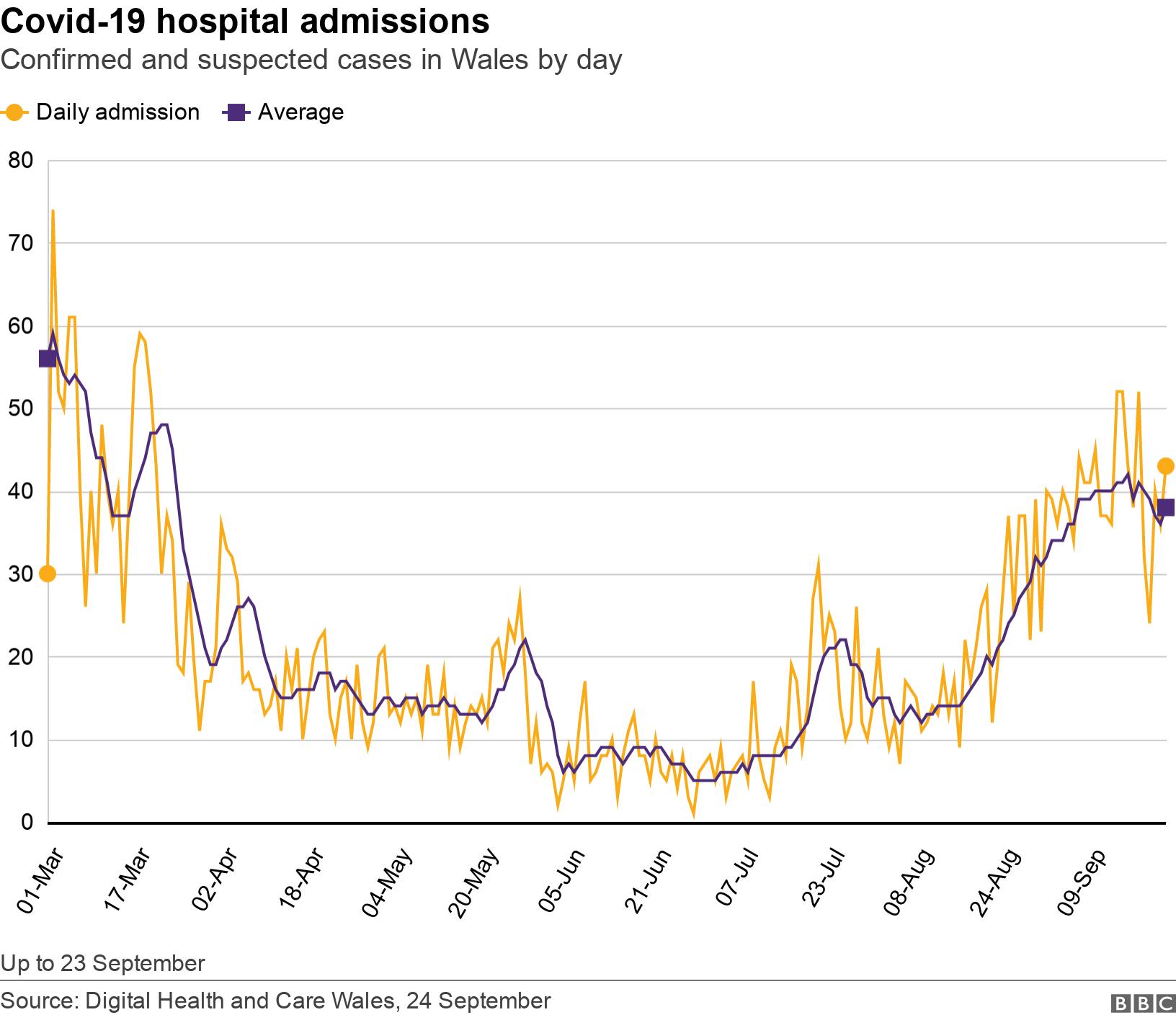 Other figures out on Friday showed: