Vaccines have saved tens of millions of lives in the past century, yet in many countries health experts have identified a trend towards “vaccine hesitancy” – an increasing refusal to use vaccination.

Skip tens of millions of lives

The World Health Organization estimates that vaccines prevented at least 10 million deaths in just five years between 2010 and 2015. It says vaccines have been one of the biggest success stories of modern medicine.

End of tens of millions of lives

The World Health Organization (WHO) is so concerned that it has listed this trend as one of the 10 threats to global health in 2019. 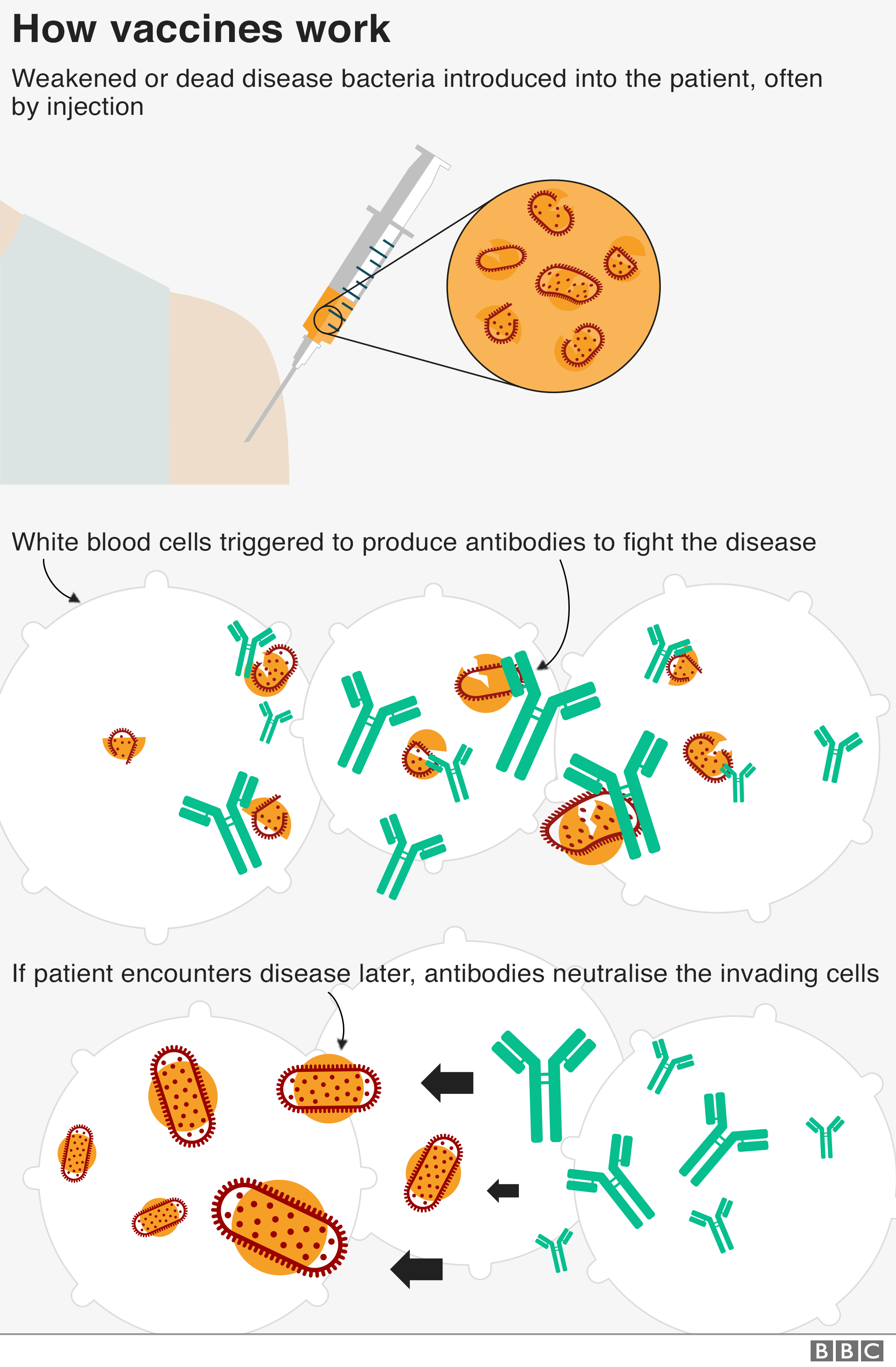 How was vaccination discovered?

Before vaccines existed, the world was a far more dangerous place, with millions dying each year to now preventable illnesses.

The Chinese were the first to discover an early form of vaccination in the 10th Century.

Variolation involved exposing healthy people to tissue from the scabs caused by a disease to build up immunity.

Smallpox was a highly contagious infectious disease that killed about 30% of those who contracted it. Survivors were often left scarred or blind. It killed huge numbers of people until it was eradicated in 1979. About 300 million people died from the disease in the 20th Century.

In 1796 Jenner carried out an experiment on eight-year-old James Phipps.

The doctor inserted pus from a cowpox wound into the boy, who soon developed symptoms.

Once Phipps had recovered, Jenner inserted smallpox into the boy but he remained healthy. The cowpox had made him immune.

In 1798, the results were published and the word vaccine - from the Latin 'vacca' for cow - was coined.

What have been the successes?

Vaccines have helped drastically reduce the damage done by many diseases in the past century.

About 2.6m people were dying from measles every year before the first vaccination for the disease was introduced in the 1960s. Vaccination resulted in an 80% drop in measles deaths between 2000 and 2017 worldwide, according to the WHO. 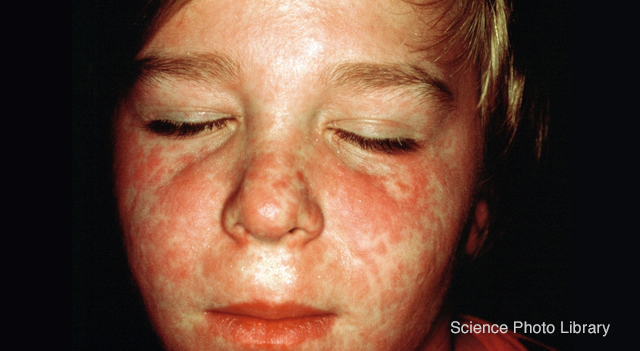 Measles is a highly infectious viral illness that can lead to serious complications. Symptoms include spots, sore eyes and a high temperature. It is now uncommon in the UK due to vaccination. 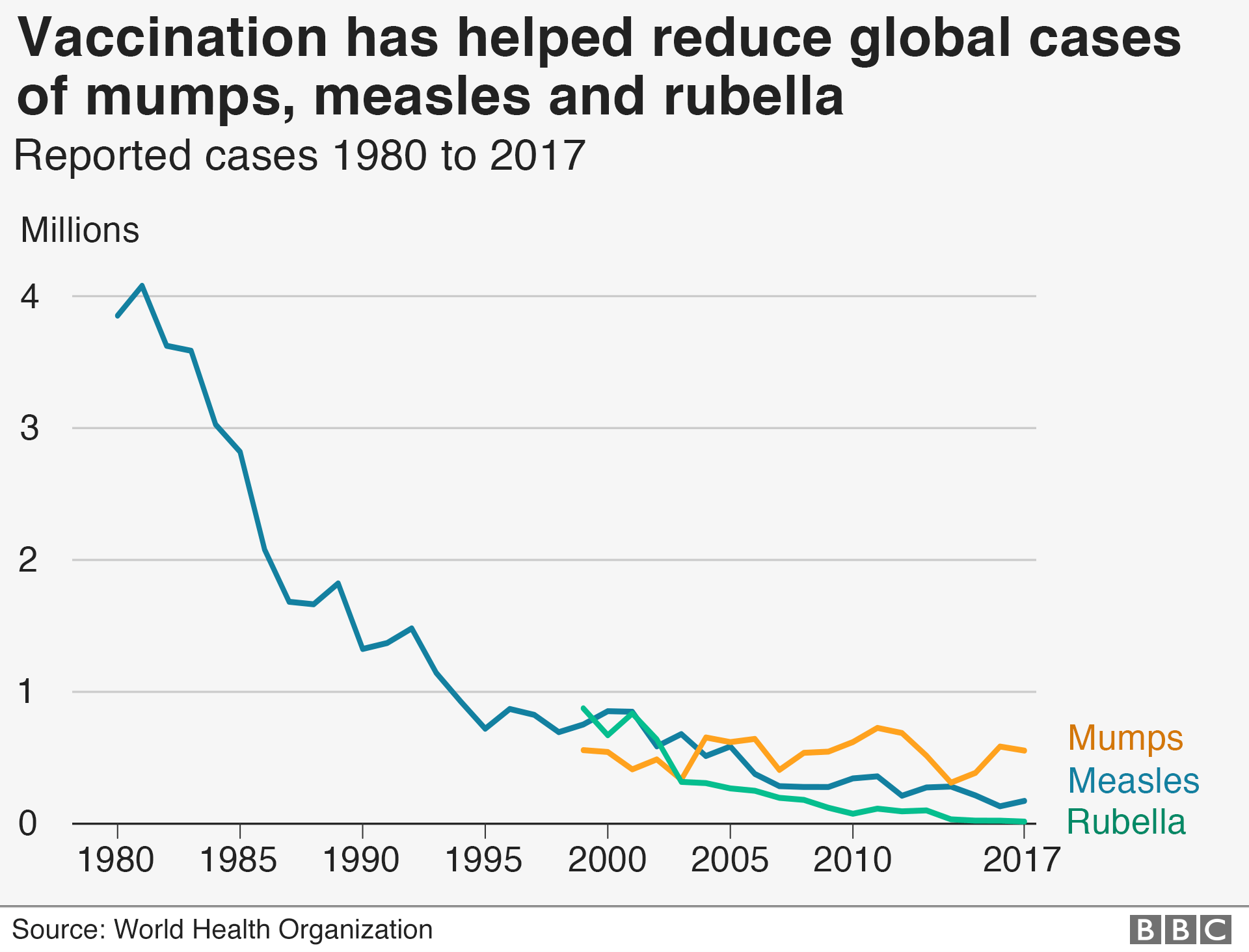 Only a few decades ago, paralysis or death was a very real concern as millions fell victim to polio. Now polio has almost disappeared.

Polio is a highly infectious virus that hits the nervous system - the number of cases has fallen 99% since an eradication drive started in 1988. Until then, “Iron lungs” - coffin-like cabinet respirators - were commonplace in polio wards. 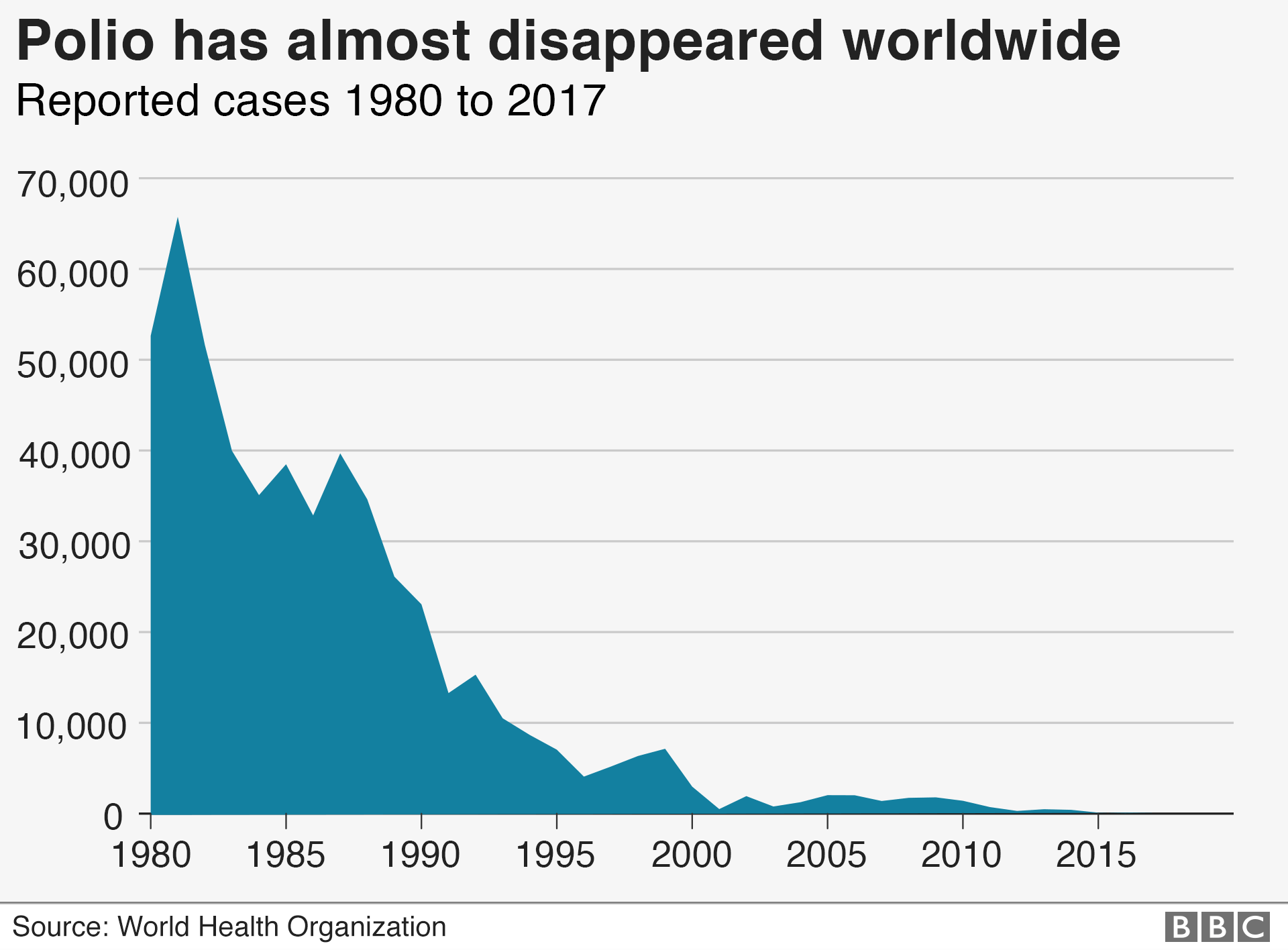 Why do some people refuse vaccination?

Suspicion of vaccines has been around almost as long as modern vaccines themselves.

In the past people were sceptical for religious reasons, because they thought vaccination was unclean, or because they felt it infringed on their freedom of choice.

In the 1800s so-called anti-vaccination leagues popped up across Britain, pushing for alternative measures to fight disease, such as isolating patients.

Up to 100,000 people attended a march against vaccinations in Leicester in 1885.

He was fined several times for refusing to get his daughter vaccinated. Tebb was also paranoid about being buried before being confirmed dead, and founded the London Association for the Prevention of Premature Burial.

One of the key figures in the recent history of the anti-vaccination movement is Andrew Wakefield.

In 1998, the London-based doctor published a report falsely linking autism and bowel disease to the MMR vaccine.

MMR is a three-in-one vaccine given to young children that fights measles, mumps and rubella, or German measles.

Even though his paper was discredited and Wakefield was struck from the medical register in the UK, there was a drop in the number of children vaccinated after his claims.

In 2004 alone, 100,000 fewer children received the MMR vaccine in the UK: this led to a rise in measles cases further down the line.

The issue of vaccines is being increasingly politicised too.

US President Donald Trump, without evidence, appeared to link vaccinations to autism, but has recently urged parents to get their children vaccinated.

The biggest global study of attitudes to immunisation, conducted by the Wellcome Trust in 2019, suggested that distrust of vaccines was highest in Europe, with France the most sceptical.

The study analysed the responses of more than 140,000 people in over 140 countries. Other countries where distrust of vaccines was found to be high included Gabon, Togo and Russia.

What are the risks?

When a high proportion of the population is vaccinated it helps prevent the spread of disease which in turn provides protection for those who have not developed immunity or who cannot be vaccinated.

This is called herd immunity and when it breaks down there is a risk to the wider population.

The proportion of people who need to be vaccinated to maintain herd immunity differs between diseases but for measles is 95% and for less contagious polio is more than 80%.

Last year in an ultra-Orthodox Jewish community in Brooklyn, USA, fliers were distributed wrongly claiming links between vaccines and autism.

That same community has been at the centre of one of the largest outbreaks of measles in the US in decades.

In the US as a whole, there were already more than twice the number of measles cases from January to early June 2019 as there were in 2018. 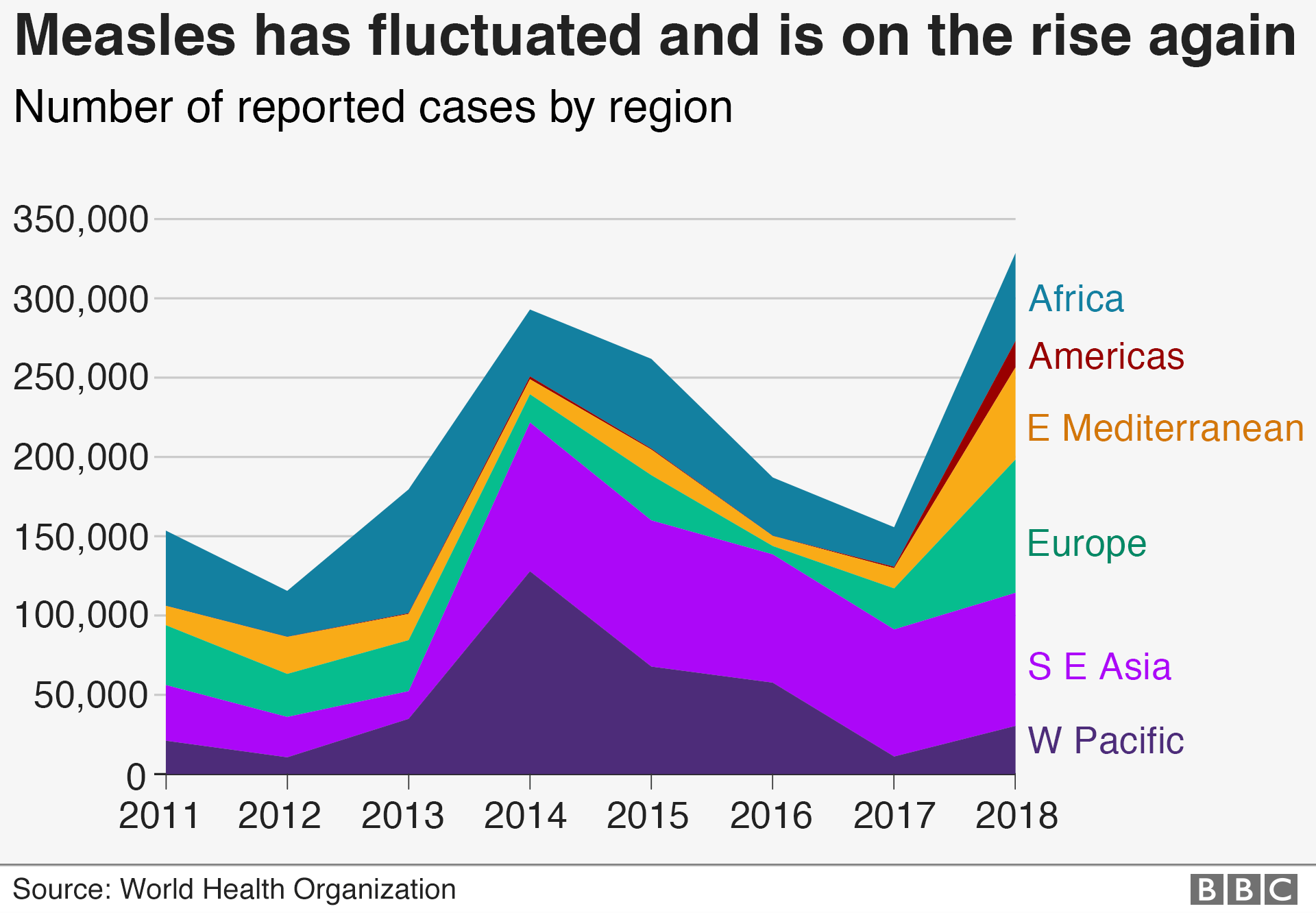 A study published in the American Journal of Public Health found that "a significant portion of the online discourse about vaccines may be generated by malicious actors". Researchers reviewed more than 250 tweets about vaccination from accounts linked to a St Petersburg-based organisation named in a US indictment over alleged election meddling.

The proportion of the world’s children who receive recommended vaccines has remained unchanged at 85% for the past few years, according to the World Health Organization.

The WHO says vaccines continue to prevent between two and three million deaths worldwide every year.

The biggest challenges to vaccination, and the lowest rates of immunisation, are in countries with a recent history of conflict and extremely poor healthcare systems, including Afghanistan, Angola and the Democratic Republic of Congo.

But the WHO has also identified complacency as a key issue in developed countries; put simply people have forgotten the harm a disease can do.