The man behind Somalia's only free ambulance service

Somalia's capital city - where there are frequent and deadly bomb blasts - only has one free ambulance service, which was founded by Abdulkadir Abdirahman Adan 13 years ago.

When he returned from Pakistan, where he had been studying dentistry, to Mogadishu as a fresh graduate he was struck by the lack of ambulances on the busy streets - and people using wheelbarrows to ferry the sick to hospital.

The very few ambulances that did exist and respond to calls came from private hospitals and patients had to pay for their collection.

So not long after his return, Dr Adan decided to start an ambulance service.

"I bought a minibus, revamped it and made it accessible for wheelchair users too," he told the BBC.

He started to operate the minibus, carrying the wounded, injured and the heavily pregnant to the hospital.

Such was the demand for the service that he realised it needed to expand and he began frequenting the city's open-air markets and corner shops, looking for potential donors.

"I managed to convince a group of local entrepreneurs to chip in and buy us another minibus," he says.

At the time Dr Adan was a part-time tutor at a couple of universities in the city.

"I asked my students if they wanted to save a life and if they did, to donate a $1 (£0.75) a month to help save our brothers and sisters," he says.

Soon everywhere he went, he began to ask people to contribute a $1 a month to help run Aamin Ambulance.

"Aamin" means "trust" in Somali - and most residents of the city feel it has lived up to its name in a society failed by its politicians. 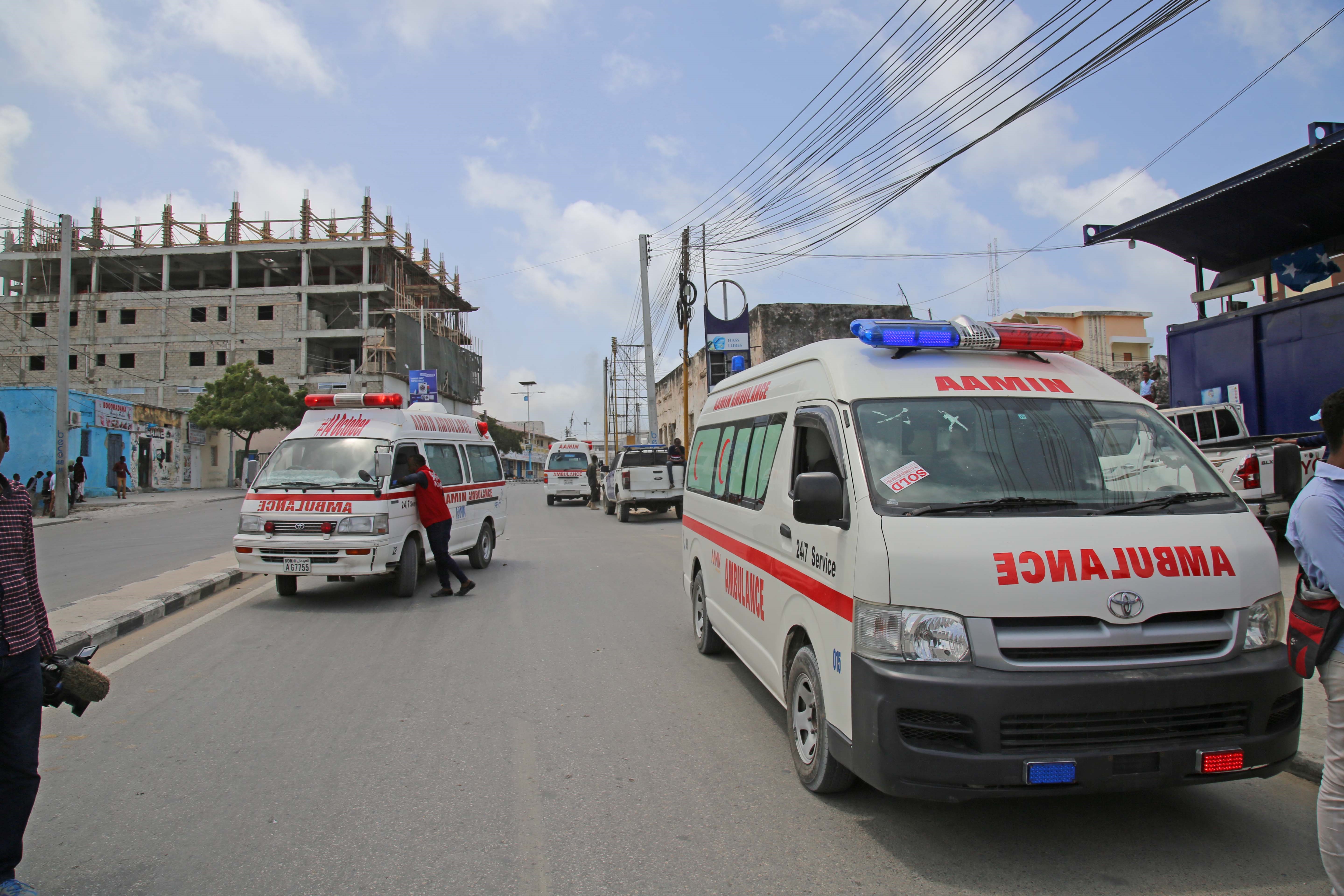 Today Aamin Ambulance, which survives on donations, has a staff of 35 people. Many of them are volunteers and students, Dr Adan says.

The volunteers are not paid a salary but some of their expenses, such as transportation, are covered.

The service has a fleet of 20 ambulances and a driver for each vehicle.

"We operate on donations. We don't receive any funding or help from the government.

"A while ago, we asked the Mogadishu mayor's office if they could assist us with 10 litres of petrol a day but we are still waiting to hear about that."

But Dr Adan has been able to attract some backing from the United Nations.

"WHO [the World Health Organization] bought us two cars. UNDP donated some walkie-talkies," the 45-year-old says.

"We bought second-hand ambulances from Dubai and had them delivered here. Recently, the British embassy in Mogadishu organised a half-marathon to raise funds for our service.

Raising money can be hard work, as is dealing with the city authorities which recently banned Aamin Ambulance from attending blast scenes.

The crux of the problem seemed to be the government's sensitivity about casualty figures from bombings carried out by Islamist militants - Aamin Ambulance often keeps journalists up-to-date about what its paramedics have witnessed using social media.

The ban infuriated some when it was reported last week on the BBC Somali Service's Facebook page, who deplored the government for "stopping aid".

But Dr Adan tried to play down the friction. 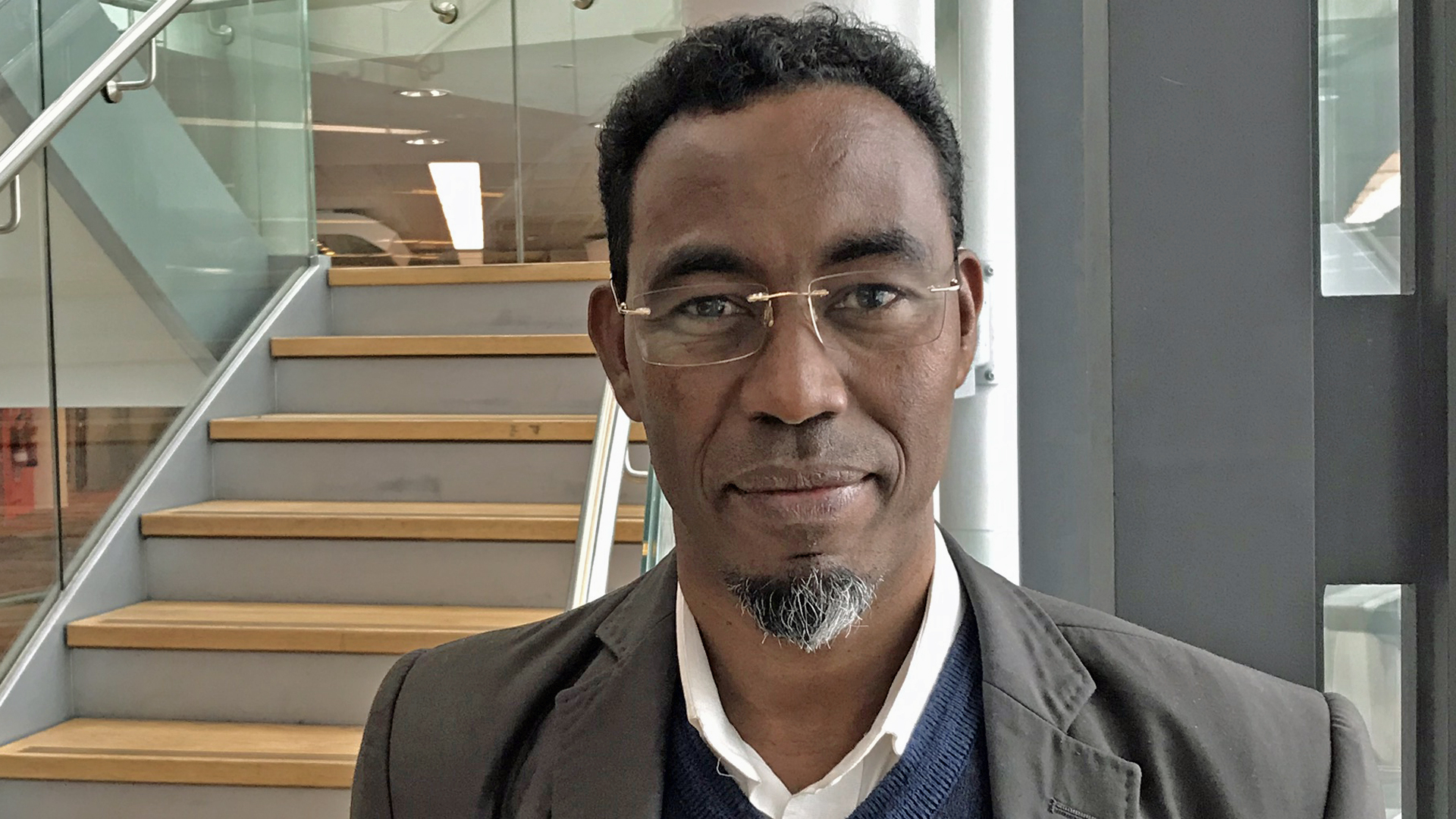 The most valuable thing for me is human life. That is my driving force"

"I spoke to the police commissioner, who rescinded the ban but he told us to let them know when we are attending to an emergency. We are not allowed to talk to the media or talk about the body count."

While a spokesman for the regional authority, Salah Hassan Omar, told the BBC it had all been a misunderstanding and was more about "how to best work together".

For Dr Adan, such headaches can be overcome as he is heartened by the generosity he has experienced since starting the ambulance service.

"Every person in this life has a purpose and the most valuable thing for me is human life. That is my driving force," he says.

"Somalis are very generous people, even when they have nothing. Our country has been in turmoil for 30 years and it is only active because of money sent from abroad.

"Our country has been running on the generosity and goodwill of Somalis in the diaspora for decades.

"Aamin is almost a joint community effort - we have had to take the reins for the well-being of our fellow Somalis."

Although Mogadishu has been in the news for bombings carried out by the militant group al-Shabab, Aamin Ambulance service is not solely borne out of the need to attend to these types of attacks.

Dr Adan says the ambulances go where they are needed, whether it is to attend to a small child, a woman going into labour or an old person in need of assistance.

"Anything really and anyone who needs our help - we have paramedics and nurses ready," he says.

For the future, Dr Adan envisions a Somalia where nobody needs to die because they are unable to get help in time.

He would like to see Aamin Ambulance expand to cover the whole country.

It may seem like an unlikely vision as al-Shabab still controls most rural areas - but Dr Adan is nothing if not determined.

And al-Shabab, known for demanding protection money from many Somali businesses - even in Mogadishu from where it was expelled in 2011, does not seem to hassle Aamin Ambulance.

"We're not a business, we're not making a profit and we're not political. I can't possibly see what al-Shabab would want with us," says Dr Adan.

FBI director: China is 'greatest threat' to US

China is working to be the world's superpower "by any means necessary," Christopher Wray said.

California sees 10,000 new cases in a single day Trump moves to pull US out of WHO amid pandemic

What unites young people against Obama and Trump

Can you become immune to coronavirus?

What US black radio makes of this moment

BBC Travel: Is this the world's smallest country?

Could TikTok be banned in the US?