Is South Africa turning a corner in its battle against corruption?

Two powerful images emerged this week, offering starkly contradictory perspectives on the country's long and tortuous struggle against high-level graft and its attempts to repair a broken judicial system.

The first picture was of a bright red Ferrari (an FF F151, if you must know) being confiscated by officials from South Africa's Asset Forfeiture Unit, along with a Bentley convertible, two staggeringly opulent villas and others items worth a total of 300m rand ($18.2m; £14m).

Ever since former President Jacob Zuma was pushed out of office, in disgrace, two years ago, and his successor promised to wage war against the "state capture" - the grand corruption that flourished so spectacularly during the Zuma era, the public has been waiting, with growing impatience, to see prominent figures arrested and to see a culture of high-level impunity brought to an abrupt end.

Last Monday's car and villa seizures were accompanied by seven arrests, of businessmen and provincial government officials and bureaucrats, charged with multiple counts of wrongdoing in relation to a huge asbestos-removal contract - counts that all boil down to the fundamental, and seemingly ubiquitous, crime of insider trading on state procurement deals.

In other words, of businessmen and state officials conspiring to steal money from tax payers by inflating, manipulating, or otherwise corrupting government contracts.

It was a rare and dramatic moment. And there have been more arrests, and more breakthroughs, since then.

On Wednesday a revived National Prosecuting Authority (NPA) - which recently charged eight people in relation to one of modern South Africa's most outrageous corruption scandals involving the looting and collapse of the rural VBS savings bank - revealed that it had cut a deal with one senior official (the "mechanic in the background", according to an expert), who is now expected to spill the beans against his co-accused, and others.

Add to that the steady stream of revelations about high-level corruption emerging from the Zondo Commission (a judge-led investigation into "state capture", which is now working closely with prosecutors and is expected to lay the groundwork for criminal charges) and you have what many South Africans hope is a sense of corners being turned, of new brooms hard at work, dominoes falling, and a growing momentum in the country's long-awaited clean-up campaign.

The governing African National Congress (ANC) has even committed itself - at least in principle - to the creation of a powerful new anti-corruption body, enshrined in the constitution, which would be free from the political pressures that saw an earlier version of such a force - the Scorpions - disbanded by a simple majority vote in parliament, over a decade ago, when it began to threaten powerful interests.

These developments in South Africa appear to be rattling some very powerful figures, including the Secretary General of the ANC, Ace Magashule, who claimed this week, without evidence, that he was about to be arrested in a politically motivated "Hollywood-style" raid, over multiple, long-standing allegations - which he denies - of corruption. 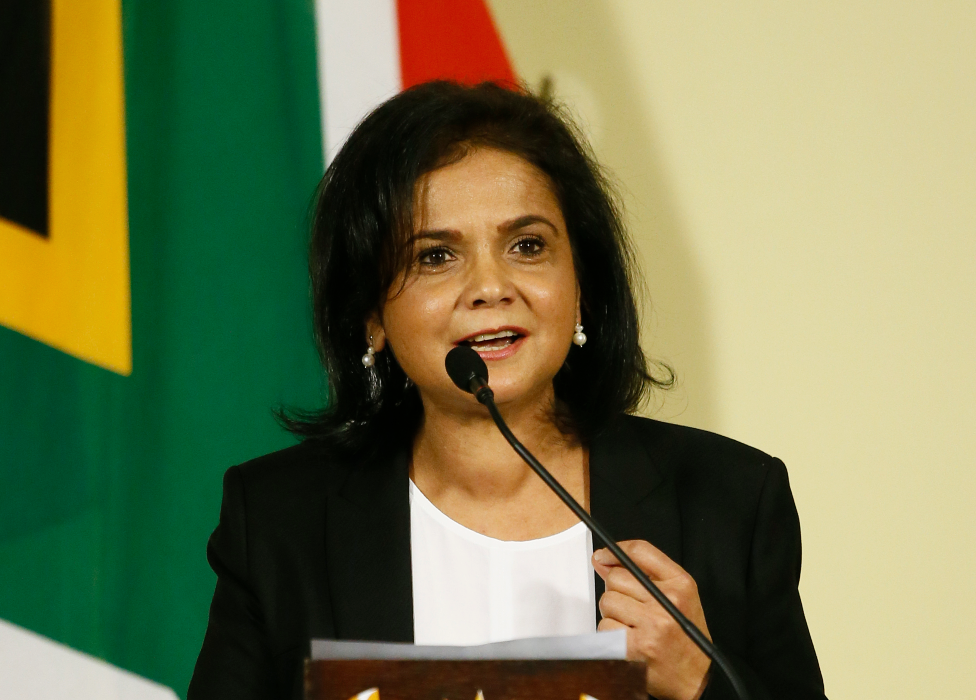 Are we winning this battle? At this point I can say we are not winning. The amount of work that needs to be done is astronomical, to say the least"

"The wheels of justice are turning," the NPA's new head, Shamila Batohi, told parliament this week.

"In the past, these cases might never have seen the inside of a courtroom."

But there is another image from the past few days, that some here believe offers a truer reflection of the state of this country's law enforcement agencies, and the scale of the task still confronting President Cyril Ramaphosa and his allies.

A video from a courthouse in the small provincial town of Senekal showed a crowd of angry farmers protesting on the street and then storming the building and setting a police vehicle on fire. This was on Tuesday.

Although the farmers' anger was linked to a very specific local event, with possible racial overtones - the gruesome murder of a 22-year-old white man whose body was left hanging on a pole - the incident served as a reminder of the deep frustration felt by many communities across South Africa, where lawlessness and violent crime remain endemic, and where vigilantism reflects a profound lack of trust in the police, prosecutors and courts.

Years of underfunding and staff shortages at the NPA, along with signs of political meddling, have resulted in a widespread loss of faith in the judicial system as a whole.

"Are we winning this battle? At this point I can say we are not winning. The amount of work that needs to be done is astronomical, to say the least," the NPA's Ms Batohi acknowledged, earlier this year, citing a chronic lack of skilled staff and other resources.

Another of the "new brooms" brought in to the NPA to repair the damage of the Zuma era put it even more bluntly.

"Not just broken, it's rotten in places and there are some saboteurs around who are undoing the work we are trying to do," said the NPA's investigative directorate head Hermione Cronje.

"Those who captured the state are laughing at the inability of the NPA to do anything with one arm tied behind its back, and one eye blindfolded," said Paul Hoffman of the anti-corruption organisation Accountability Now.

Much now depends on whether the ANC decides that any senior officials charged with corruption must step down, immediately, from all official positions.

If that happens, then President Ramaphosa's position within his own party will be strengthened, and his ability to push ahead with his clean-up campaign will gain more momentum.

But if, as seems more likely, the issue gets bogged down in party politics, there is every chance that Mr Ramaphosa's opponents will be able to follow the example of Mr Zuma - who has successfully avoided trial on multiple corruption charges, which he denies, for more than a decade.

Lurking behind all this is the bigger question of whether a successful crackdown on corruption - as welcome as it might be - will have any significant impact on South Africa's increasingly dire economic prospects, with investors, analysts and diplomats increasingly warning of an imminent debt crisis and even the possibility, further down the road, of a "failed state".

"This is a precarious situation. South Africa is heading towards collapse. The economy needs restructuring, but there's no investment. The ANC have no idea what's coming," warned businessman and political commentator Moeletsi Mbeki, arguing that the fight against corruption was less of a priority than the need to address what he called "legal corruption", meaning entrenched economic interests that a resisting fundamental reforms.