More than 300 schoolgirls have been kidnapped by unidentified gunmen from a school in north-western Nigeria.

Police say they believe the girls were taken to a forest after being abducted from their boarding school in Jangebe, Zamfara state, on Friday morning.

It is the latest mass kidnapping from schools in recent weeks. Armed gangs often seize schoolchildren for ransom.

"This administration will not succumb to blackmail by bandits who target innocent school students in the expectations of huge ransom payments," he said in a statement.

"Our primary objective is to get the hostages safe, alive and unharmed."

Mr Buhari said that although authorities could deploy "massive force against the bandits", there were fears that the schoolgirls could be used as human shields.

At least 42 people, including 27 students, who were kidnapped last week in Kagara, in neighbouring Niger state, are yet to be released.

The 2014 kidnap of 276 schoolgirls in the north-eastern town of Chibok by Islamist militants Boko Haram brought global attention to the scourge of raids on schools in Nigeria but the most recent attacks are suspected to be the work of criminal gangs.

How did the attack happen?

Some of the gunmen were dressed as government security forces, the report said, adding that they forced the schoolgirls in the vehicles.

But other witnesses have told the BBC that the armed men arrived on foot at the school. 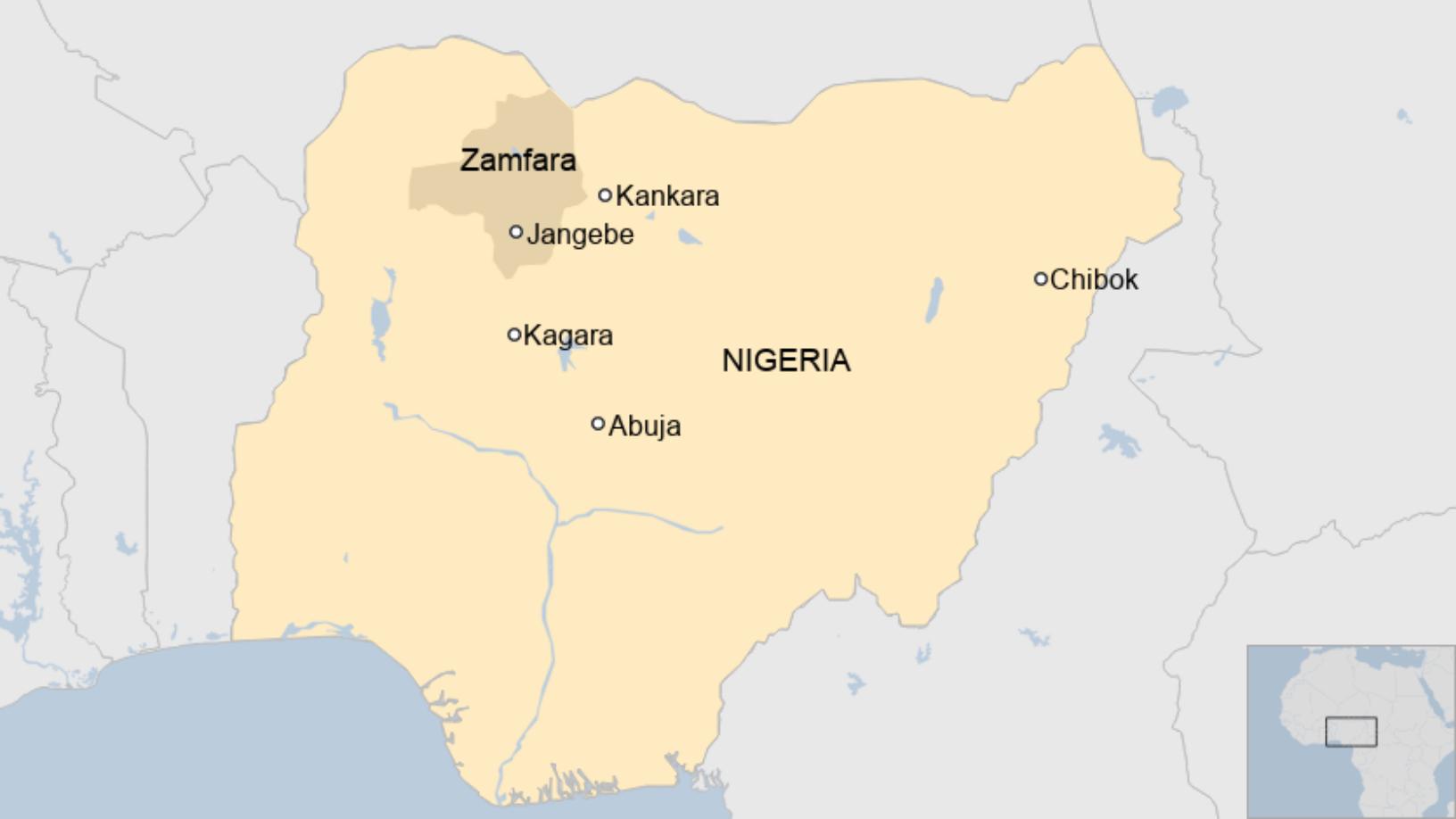 The witness told BBC Hausa that more than 100 gunmen entered the school.

"They broke the school gate and shot at the security man. Then they moved into the hostels and woke up the girls, telling them it was time for prayers. After gathering all of them, the girls were crying and they took them away to the forest. They were also shooting in the air as they were marching to the forest," the witness said.

Distraught parents later gathered outside the school and some have gone out into the bush to look for their daughters, witnesses say.

A teacher told the BBC that of 421 students in the school at the time, only 55 had been accounted for.

A police statement said its officers and a military contingent had been deployed to Jangebe to search for the girls.

The UN children's agency Unicef said it was ''angered and saddened'' by yet another mass abduction of students in Nigeria describing it as ''brutal'' and a ''violation of children's rights.''

Who was behind the attack?

No group has so far claimed responsibility.

Armed groups operating in Zamfara often kidnap for ransom but when gunmen took more than 300 boys from Kankara in neighbouring Katsina state in December last year, some reports claimed that Boko Haram, which operates hundreds of miles away in the north-east, was behind the attack.

The claims were later disputed and the boys released after negotiations.

Why are schoolchildren being abducted?

Every time children are taken from their schools by armed gunmen in northern Nigeria, the kidnapping of the Chibok girls is mentioned.

Similar raids took place before that well-publicised abduction but they received little publicity and they never involved girls.

But global attention generated by the #BringBackOurGirls campaign showed armed groups that the mass abduction of children was a sure way of applying pressure on authorities, including asking for ransom, although the authorities always deny paying.

The government does not appear to have a strategy for stopping these incidents from happening.

But two weeks ago, lawmakers from Zamfara state suggested offering amnesty to repentant kidnappers in exchange for sustainable economic opportunities.

It's a controversial strategy but one that yielded some positive results in the Niger Delta, which saw a reduction in crime after a similar amnesty programme in 2009.

The government so far says it will not negotiate with criminals.

In the meantime, schools in rural northern Nigeria are more vulnerable than they've ever been.

A "Safe School Initiative" was launched after the Chibok girls were abducted to bolster security in schools in Nigeria's north-eastern region by building fences around them.

At least $20m ($14m) was pledged for the three-year project which was supported by the United Nations Special Envoy for Global Education, Gordon Brown, the former UK prime minister.

Though most of the recent kidnappings have happened in the north-west, which were not covered by the Safe Schools Initiative, the 2018 abduction of 110 schoolgirls from Government Science School, Dapchi in north-eastern Yobe state raised questions about the success of the initiative.