Since December, more than 600 students have been abducted from schools in north-west Nigeria, highlighting a worrying development in the country's kidnap-for-ransom crisis.

Friday's kidnapping of nearly 300 students from the Government Girls Science Secondary School in Jangebe, Zamfara state, which ended with their release, was the second mass kidnap from schools in less than 10 days. Twenty-seven boys and their teachers who were taken from a school in Kagara, Niger state on 17 February were released on Saturday.

The authorities say recent attacks on schools in the north-west have been carried out by "bandits", a loose term for kidnappers, armed robbers, cattle rustlers, Fulani herdsmen and other armed militia operating in the region who are largely motivated by money.

Many here believe that a weak security infrastructure and governors who have little control over security in their states - the police and army are controlled by the federal government - and have resorted to paying ransoms, have made mass abductions a lucrative source of income.

It is an accusation the governors deny. Zamfara governor Bello Matawalle, who in the past has promised "repentant" bandits with houses, money and cars, said people "not comfortable [with his] peace initiative" were sabotaging his efforts to end the crisis.

Until now, kidnap victims have generally been road travellers in Nigeria's north-west, who pay between $20 and $200,000 for their freedom, but since the well-publicised abduction in 2014 of 276 schoolgirls from Chibok secondary school by Boko Haram Islamist militants in Borno state, more armed groups have resorted to mass abduction of students.

Kidnappers rewarded with cars and money

Kidnapping hundreds of students rather than road travellers, guarantees publicity and government involvement in negotiations, which could mean millions of dollars in ransom payments.

Security expert Kemi Okenyodo believes that this has made the abductions lucrative for criminal gangs.

President Muhammadu Buhari has also insinuated that state governors were fuelling the crisis.

"State governments must review their policy of rewarding bandits with money and vehicles. Such a policy has the potential to backfire with disastrous consequences," he said.

State Governments must review their policy of rewarding bandits with money and vehicles. Such a policy has the potential to backfire with disastrous consequences. States and Local Governments must also play their part by being proactive in improving security in & around schools.

The mastermind of the abduction of more than 300 students in Katsina state in December was recently pardoned in nearby Zamfara state after he "repented" and handed over his weapons to the government.

Auwalu Daudawa and his gang were promised accommodation in the town by Governor Matawalle, along with assistance to improve their livelihoods.

Unlike his predecessor who was severely criticised for his handling of the Chibok girls kidnapping, Mr Buhari has not come in for huge amounts of public condemnation over the kidnap crisis, largely due to goodwill earned from negotiating the release of some of the Chibok girls in his early days.

His supporters also say that his government has been more responsive in securing the release of abducted students, though dozens, including Leah Sharibu, a Christian who was kidnapped when Boko Haram attacked their school in Dapchi in 2018, remain in captivity.

But security in Nigeria has deteriorated under Mr Buhari - there have been four reported mass abductions of students under his watch. That three of those have happened in the north-west highlights the worsening insecurity in that part of the country, while much international attention is focussed on the Boko Haram insurgency hundreds of miles away in the north-east. 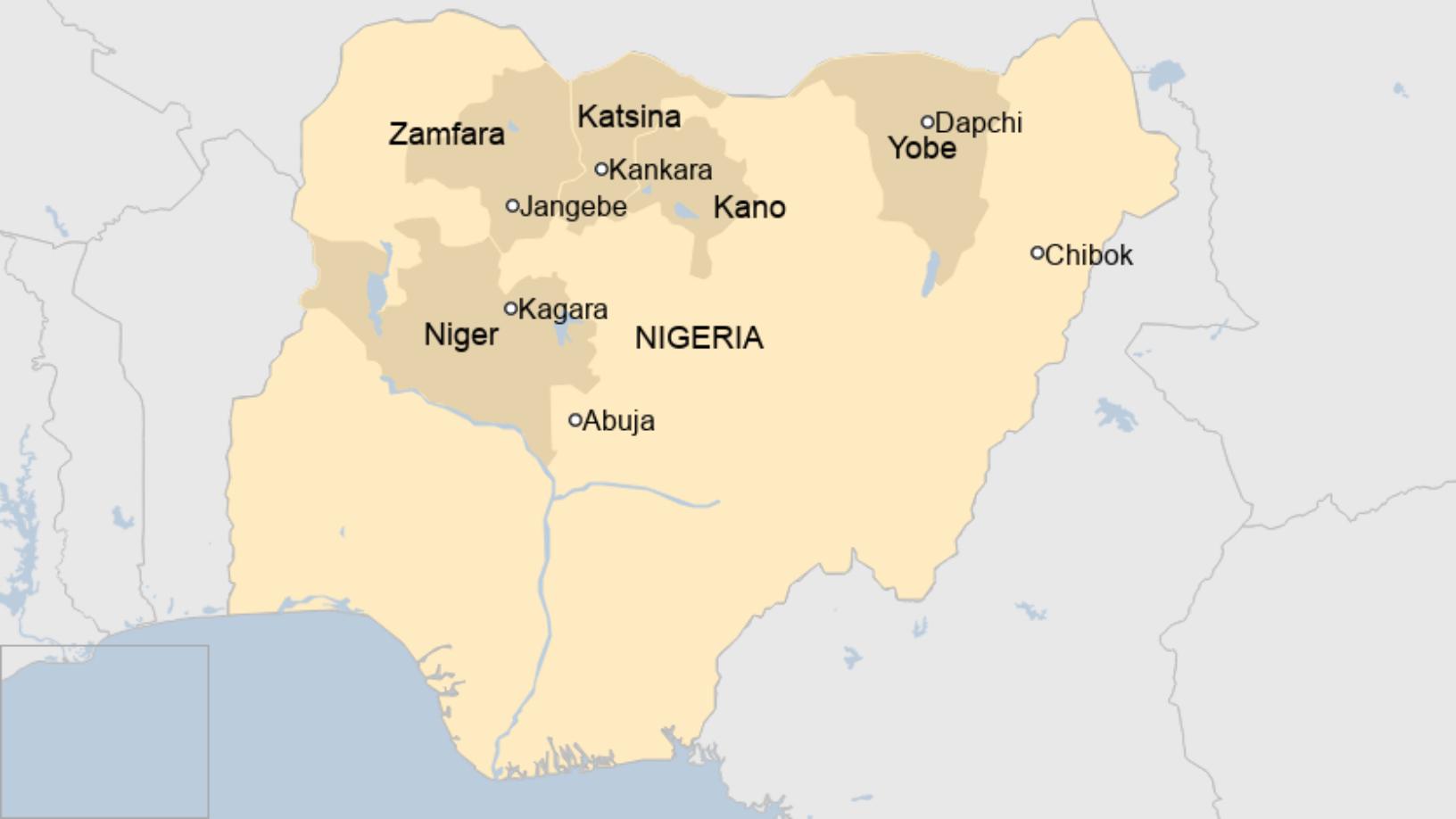 Though the military is currently carrying out an operation against bandits in the region, communities have been sacked and most forest reserves in the region are under the control of criminals.

A "Safe School Initiative" was launched after the Chibok girls were abducted to bolster security in schools in north-eastern Nigeria by building fences around them.

At least $20m ($14m) was pledged for the three-year project, which was supported by the United Nations Special Envoy for Global Education, Gordon Brown, the former UK prime minister.

Though most of the recent kidnappings have happened in the north-west, which were not covered by the Safe Schools Initiative, the 2018 abduction of 110 schoolgirls from Dapchi in north-eastern Yobe state raised questions about the success of the initiative.

Nigeria's military has built posts close to some schools, but the number of schools in the north means many are left unprotected.

Some schools have employed local vigilantes armed with local weapons but this has often proved ineffective against the heavily armed bandits.

How have Nigerians reacted?

Unlike the kidnap of the Chibok girls which attracted worldwide attention, there has not been much reaction to subsequent abductions.

There have been no hashtags like #BringBackOurGirls which drew global support then and helped apply pressure to President Jonathan to act, nor have there been street demonstrations in Nigeria.

Bukky Shonibare, co-founder of the Bring Back Our Girls Group, who was involved in protests in Abuja when the Chibok incident happened, said Nigerians were exhausted from the frequency of mass abductions.

"There's only a limit to what the heart can take, Nigerians went through a lot following the kidnap of the Chibok girls... people are just really tired," she told the BBC.

She said that despite the lack of street demonstrations in subsequent abductions, her group worked behind the scenes to apply pressure.

Nigerians on social media have mocked the president's handling of the kidnap crisis by using the hashtag #ThingsMustChange employed by Mr Buhari while campaigning for office in 2015.

This tweet from 2015, when he said: "How can 219 girls be missing in our country, and our leader appears incapable of action? #ThingsMustChange," has been seized upon by tweeters.

How can 219 girls be missing in our country, and our leader appears incapable of action? #ThingsMustChange

How has education in the region been affected?

Authorities in Kano and Yobe states ordered more than 20 schools shut at the weekend because of the insecurity.

Some schools were also recently closed in Zamfara and Niger states.

In Borno, Yobe and Adamawa states, dozens of schools have been shut for years because of the Boko Haram insurgency.

For a region with a high rate of out-of-school children, this is a massive disruption to gains that have been recorded in recent years, made worse by last year's restrictions imposed because of Covid.

According to Unicef, there is a net attendance rate of just 53% in primary schools in northern Nigeria though education at that level is free and compulsory. The levels for girls is even lower because of socio-cultural norms and practices that discourage attendance in formal education, it said.

"The implication of these [abductions] is parents or guardians get scared of allowing their wards to go to school," said Ms Shonibare.

"This literally takes us back on the gains that we have made [especially] when it comes to girl-child education," she said.

The spate of attacks on schools in the north-west signals a double assault on education in the region.

The bandits, motivated by money, might be ideologically different from groups like Boko Haram in the north-east, which are against secular education, but together, they are having a devastating effect on education across northern Nigeria.