Australian Prime Minister Julia Gillard is visiting wildfire-hit regions in Tasmania, amid warnings of more searing weather across the country.

No deaths have been reported in the fires, which broke out on Thursday on the island's south coast.

But more than 100 buildings have been destroyed and communities in some areas remain cut off.

Speaking in the state capital, Hobart, Ms Gillard said assistance would be provided for those in need.

"I've come to Tasmania today for one purpose, and that's to say to the people of Tasmania that the nation is standing with them at this very, very difficult time," she said.

Emergency payments would be provided to give people immediate help and damage would be assessed to enable communities to be rebuilt.

Fires were still being fought, she emphasised, calling for residents in Tasmania and also in New South Wales, where very high temperatures are expected, to stay alert.

"This is the time to be vigilant, and I do want to pass that message to the people of New South Wales as the temperature gauge starts to rise," she said.

Ms Gillard was expected to visit Dunalley, the town worst affected by the fires.

In their latest bulletin, Tasmanian police said that searches of fire-hit properties were continuing.

"Police have searched 245 properties in Dunalley and to the north of the town, including 90 badly damaged or destroyed buildings. The preliminary screening search has discovered no deceased people at this stage," a statement said.

Searches would continue in the Murdunna and Sommers Bay areas, where more properties were known to have been destroyed.

A number of people remained unaccounted for, police said, urging local residents and tourists who had not yet registered with them to get in touch.

Police said a convoy had delivered equipment and resources to the Tasman Peninsula - cut off by fire for several days - on Sunday.

The region's main access road was also expected to open partially on Monday, ABC News reported, and boats were due to deliver goods.

Several fires were continuing to burn across the state, according to the Tasmanian Fire Service, including three rated as dangerous that were not under control. Police said none of the blazes appeared to be the result of arson. 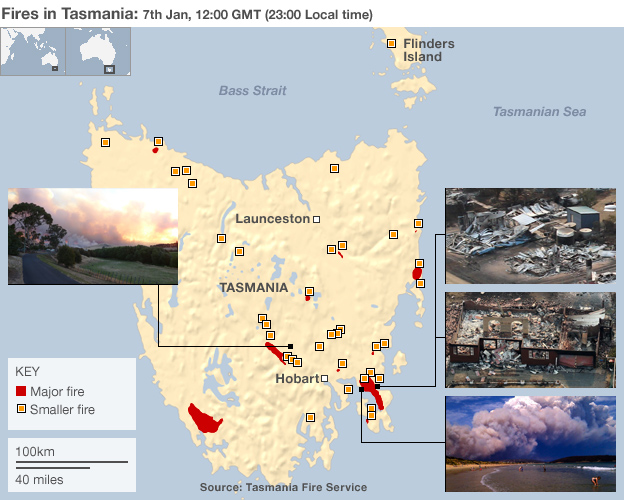 Tim Bailey, from Cheltenham, is on holiday in Hamilton, Tasmania, "From where I am I have a view of the valley and I could see all of the farmland in the valley on fire, the whole of the hill was burning."

Dunalley, a small coastal town in eastern Tasmania, was worst hit by the Forcett fire, a large blaze which cut off the Tasman peninsula for several days.

Dramatic smoke plumes were visible from the town of Carlton, as the Forcett fire burned out of control on Friday.

Late last week the Australian Bureau of Meteorology warned that the heatwave which has affected much of the nation would continue for several days. It said thick vegetation caused by two years of heavy rain could mean increased wildfire risk.

Both New South Wales and Canberra are braced for temperatures and winds to peak on Tuesday.

More than 90 wildfires are reported to be burning in New South Wales already. A total ban on the lighting on fires is to be imposed from midnight in New South Wales as well as the Canberra region, ahead of temperatures expected to climb beyond 40 degrees centigrade.

"Tomorrow is not going to be just another ordinary day," New South Wales State Premier Barry O'Farrell said. "Tomorrow will be perhaps the worst fire danger day this state has ever faced."

Australia faces wildfires each year as temperatures climb. In February 2009, on what has come to be known as Black Saturday, 173 people were killed in fires in the state of Victoria.