The Taliban have seized back control of Afghanistan, almost two decades after they were thrown out of power by a US-led coalition.

Afghan citizens have seen changes to their lives since the Taliban were last in charge - in particular many girls and women have been able to attend school and university. The future they now face is uncertain.

Emboldened by the withdrawal of US troops, and facing little resistance from Afghan forces, the Taliban have swept to power in just a few weeks.

Many are now trying to flee the country, rather than live under the Taliban's strict form of Sharia law.

How many people have died since 2001?

Twenty years of fighting have left thousands of fighters dead on both sides in Afghanistan and across the border in neighbouring Pakistan. Civilians have also been caught up in the conflict - dying in coalition air strikes and targeted attacks by the Taliban.

The number of civilian casualties in 2021 was already significantly higher than for the same period in 2020, before the Taliban swept through the country.

The United Nations attributed the recent increase in civilian deaths to the use of improvised explosive devices - IEDs - and targeted killings.

Women and children made up 43% of civilian casualties in Afghanistan in 2020.

How many have fled the fighting?

Years of conflict have forced millions to flee their homes, some taking refuge in neighbouring countries or seeking asylum further afield. Many have been left displaced and homeless within Afghanistan, alongside millions facing hardship and hunger.

Last year, more than 400,000 people were displaced by conflict. Since 2012, around five million people have fled and not been able to return home. According to the UN's human rights agency, Afghanistan has the third largest displaced population in the world.

Relief agencies have already begun reporting on the increase in internally displaced people in the wake of the Taliban advance. OCHA said more than 17,500 people had arrived in Kabul in the weeks between 1 July and 15 August.

The coronavirus pandemic has also placed an additional strain on Afghanistan's nationwide resources, and lockdowns and movement restrictions have had an impact on many people's ability to earn money - especially in rural areas.

According to the UN's Office for Humanitarian Affairs, more than 30% of the population are facing emergency or crisis levels of food insecurity.

In the past 20 years, life for many people in Afghanistan has improved. Women have seen some of the biggest changes.

The fall of the Taliban regime allowed some significant change and progress in terms of women's rights and education. Back in 1999, there was not a single girl enrolled in a secondary school and only 9,000 were at primary schools.

By 2003, 2.4 million girls were in school. That figure is now around 3.5 million, and around a third of students at public and private universities are women.

But according to the children's charity Unicef, there are still more than 3.7 million children out of school and 60% of them are girls, mainly due to the ongoing conflict and lack of adequate teaching facilities and women teachers.

The Taliban say that they no longer oppose girls' education, but according to Human Rights Watch very few Taliban officials in the areas they control actually allow girls to attend school past puberty.

Women have also been participating in public life, holding political office and pursuing business opportunities. More than 1,000 Afghan women had started their own businesses by 2019 - all activities that were previously prohibited under the Taliban.

The constitution was changed to say women should hold at least 27% of seats in the lower house of parliament, and in July they held 69 of the 249 seats.

How else has life changed?

Access to a mobile phones and the internet has grown, despite many other infrastructure issues across the country.

More than 8.6 million people - around 22% of the population - had access to the internet in January 2021 and millions now use social media.

Mobile phone usage has also continued to grow - with about 68% of people now owning a mobile phone. But according to the UN, sporadic outages of mobile service continue to affect communication.

Many people in Afghanistan do not have a bank account - around 80% of adults, which is higher than average for low income countries.

As well as security concerns, the World Bank says this is mainly due to religious and cultural beliefs, a lack of trust in the financial sector, and low rates of financial literacy.

In the capital, Kabul, where traditional adobe houses line the hillsides, the city skyline has changed over the past 20 years, with clusters of high rise buildings going up to accommodate a ballooning city population.

Kabul saw rapid urbanisation in the years after the Taliban fell, as people moved in from rural districts where fighting continued, and Afghans who fled the Taliban in the 1990s returned home from Pakistan and Iran.

Your device may not support this visualisation

Many still live in poverty

Afghanistan is one of the poorest countries in the world, although there was fairly rapid economic growth after the US invasion in 2001 with international aid pouring in.

However, growth slowed as aid flows decreased and the security situation worsened.

A government survey of living conditions for 2016-17 found that more than 54% of the population were living below the national poverty line of 2,064 Afghanis per person per month (equivalent to about $31 or £25 as of 1 January 2017). 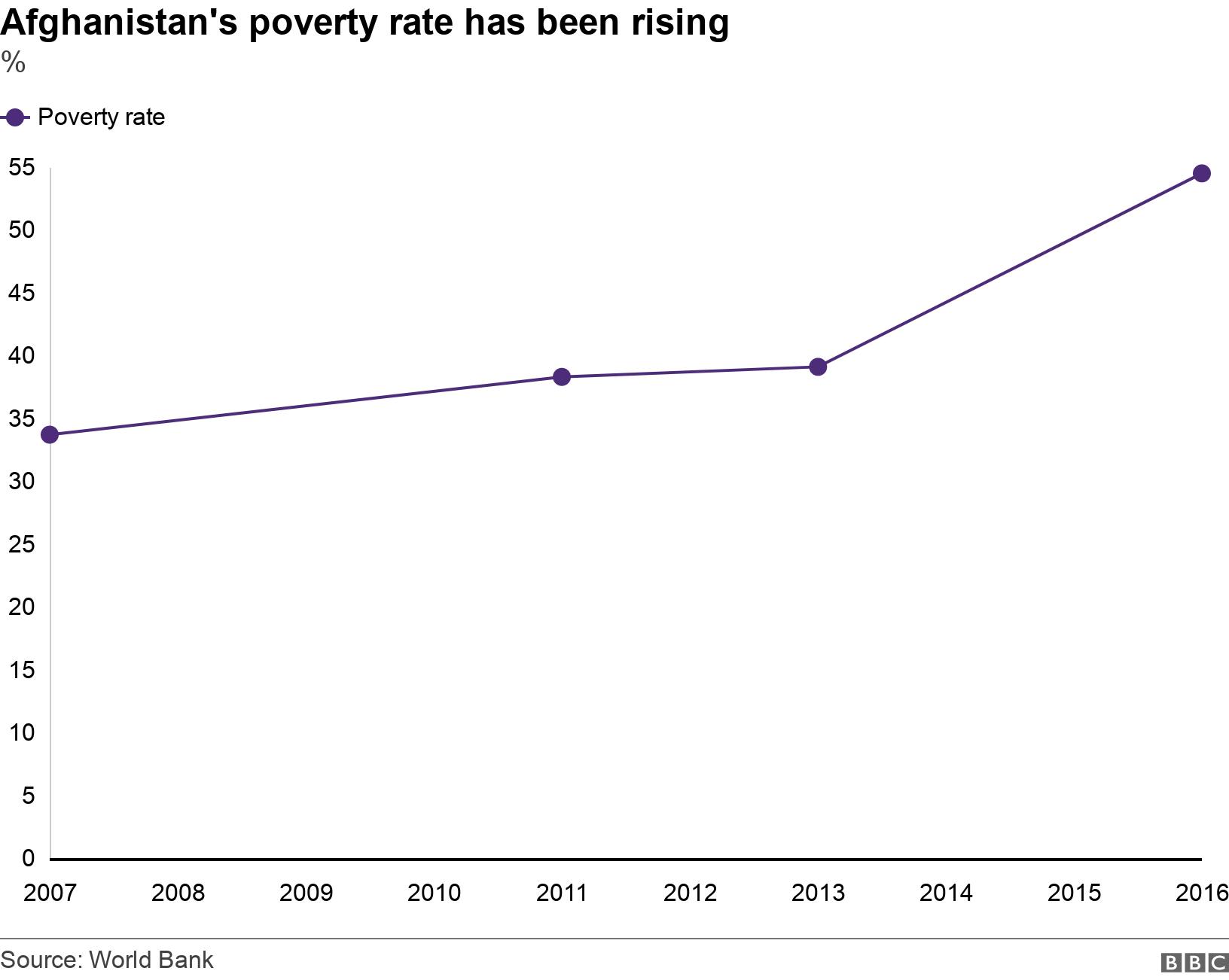 A more recent survey by Gallup in August 2019 before the pandemic pointed to severe droughts in the last few years affecting food security.

It said that nearly six out of every 10 Afghans told them they had struggled to afford food at times in the previous year.

Afghanistan remains the world's largest producer of opiates, and British officials estimate that about 95% of heroin that arrives in the UK originates in Afghanistan.

This is despite targeted eradication programmes and incentives for farmers to switch to crops such as pomegranates or saffron.

Although the Taliban enforced a short-lived ban on poppy farming in 2001, it has since become a multi-million dollar source of income for them and others. Poppy farmers are often forced to pay taxes on their earnings to the militants.

Political instability, insecurity and too few employment opportunities are seen as the main drivers for increased poppy production.