The number of people killed in China by the new coronavirus has risen to 82, with almost 3,000 confirmed ill.

The national new year holiday has been extended by three days to Sunday, in an attempt to contain the spread.

The number of deaths in Hubei rose from 56 to 76, with six deaths elsewhere. Wuhan is in lockdown and several other cities have imposed travel bans.

At least 44 cases have been confirmed abroad, including in Germany, the United States, and Australia.

There have been no deaths outside China.

On Monday, authorities in Beijing confirmed a 50-year-old man had died - the first fatality in the Chinese capital from the virus.

In Shanghai, the government has stopped businesses from returning to work until 10 February. The ban applies to all companies apart from utilities, medical firms, medical suppliers, and supermarkets.

Meanwhile, the director-general of the World Health Organization, Tedros Adhanom Ghebreyesus, is in Beijing to discuss the outbreak with the Chinese government and health experts. 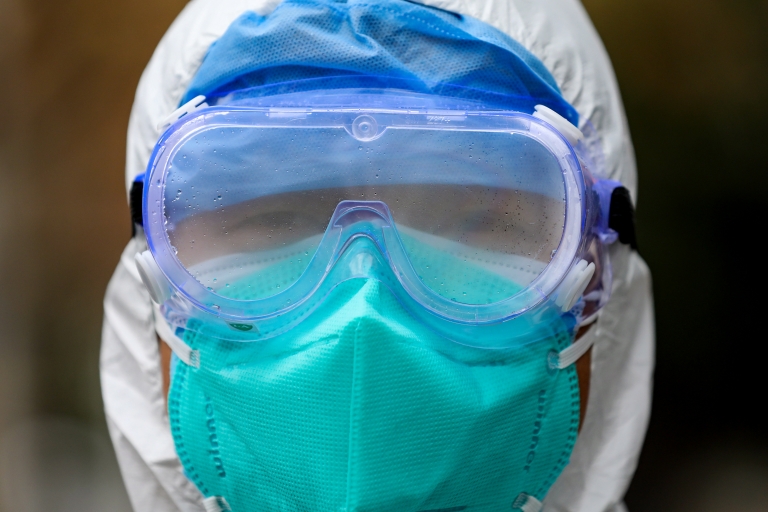 EPA
Coronavirus cases in ChinaSource: National Health Commission, as of end of 26 January, plus state media

The BBC's Robin Brant in Shanghai says extending the main holiday of the year is a highly unusual move. But after the pre-new year travel surge, the prospect of half a billion people getting back on trains, planes and buses and criss-crossing the country again is the last thing the government wants, he adds.

On Monday, Chinese Premier Li Keqiang visited Wuhan, the capital of Hubei province and centre of the outbreak.

Experts suspect many more people are infected, but actual figures are hard to ascertain due to a number of factors like some people being asymptomatic.

Prof Neil Ferguson, a public health expert at Imperial College, London, told the UK's Guardian newspaper his "best guess" put the number at 100,000 infected, while figures put together by the Li Ka Shing Faculty of Medicine of the University of Hong Kong suggest the number was closer to 43,000.

However, the University of Hong Kong research also suggested that - without public health intervention - tens of thousands more could be infected every day when the outbreak reaches its height. As a result of their projections, Gabriel Leung, the dean of the faculty of Medicine, was advising "substantial, draconian measures" to limit population mobility.

The coronavirus causes severe acute respiratory infection and there is no specific cure or vaccine.

Most of the deaths have been of elderly people or those with pre-existing respiratory problems.

What is happening in Wuhan?

Travel from the city, home to 11 million people, has been severely restricted and non-essential vehicles have been banned from the roads.

At the Hubei border, workers are checking people's temperatures before allowing them into the province.

The local government in Wuhan said no-one from the city had left China in the past four days. Some 4,096 tourists from Wuhan are still out of the country, while five million new year travellers left the city before the lockdown.

More than half a million medical staff have joined the province's prevention, control and treatment operations, while two makeshift hospitals are being built.

What is the situation in China?

Schools and official institutions will remain closed for the rest of this week.

Beijing has closed the Forbidden City for tourists, as well as a section of the Great Wall. Both Disney parks in Hong Kong and Shanghai have closed.

In Guangdong province, several cities have made face masks mandatory in public.

Hong Kong, which has eight confirmed cases, has declared a city-wide emergency, with schools closed until 17 February. Mongolia - which has yet to record a case of the virus - has closed its border with China. It has also closed schools until 2 March, and banned public events.

Meanwhile, He Qinghua, a top official with China's National Health Commission, told reporters some areas still "lack determination in controlling the epidemic", according to the state-run newspaper Global Times. He said rural villages, in particular, were failing to deal with the crisis "in a timely manner".

Over the weekend, Chinese officials warned the virus was able to spread during its incubation period, believed to be between one and 14 days, making it harder to contain the illness.

What is the situation internationally?

According to the World Health Organization and national authorities, there have been at least 47 confirmed cases outside China.

The latest case to be confirmed is in the German state of Bavaria, only the fourth so far in Europe.

In the UK, 73 people have been tested - but no-one has resulted to have contracted the virus.

Almost all had recently been to Wuhan or had been in close contact with someone who had.

Where did the virus emerge?

The virus is thought to have emerged from illegally traded wildlife at the Huanan seafood market in Wuhan.

Authorities have since temporarily banned the sale of all wildlife in China. The virus itself is a new, or "novel" coronavirus - a family that normally affects animals.

'As long as we leave, they don't mind'

Police and officials in the impact zone in Hubei and Henan provinces are now very keen to move us on wherever we arrive.

They don't seem to mind where we go - as long as we leave their towns.

We explain that the world wants to see the important, tiring work they're doing to combat the virus. But they're not interested. It could be that they're worried that our presence might imply to some that their patch is not handling this emergency well enough.

One police officer at the entrance to a small town in Henan said to me: "We don't have a problem here any more so there's no need for you to be here."

He said this at a checking station as cars were being pulled up behind him. Medical staff covered head to toe in protective clothing were then screening every passenger.

They also checked the inside of all vehicles. I'm not sure what they were looking for - but it certainly didn't look like business as usual.

What can people do to stay safe?

The World Health Organization (WHO) advises its "standard recommendations" focusing on "hand and respiratory hygiene".

That essentially means washing hands or using disinfectants, and covering one's mouth and nose when coughing or sneezing.

The advice also suggests avoiding contact with live animals in places where there have been coronavirus cases, and not to eat raw or uncooked animal products.

Learn more about the new virus

Are you in China? Have you been affected by the lockdown in various cities? Email haveyoursay@bbc.co.uk.