Megadams: Battle on the Brahmaputra

China and India have their eye on the energy potential of the vast Brahmaputra river. Will a new wave of "megadams" bring power to the people - or put millions at risk? The BBC World Service environment reporter Navin Singh Khadka reports from Assam, India.

On the banks of the Brahmaputra it is hard to get a sense of where the river starts and ends. It begins far away as a Tibetan mountain stream. On the floodplains of Assam, though, its waters spread as far as the eye can see, merging with the horizon and the sky.

From here it continues through north-eastern India into Bangladesh, where it joins with the Ganges to form a mighty river delta.

For centuries the Brahmaputra has nourished the land, and fed and watered the people on its banks.

Today, though, India and China's growing economies mean the river is increasingly seen as a source of energy. Both countries are planning major dams on long stretches of the river. 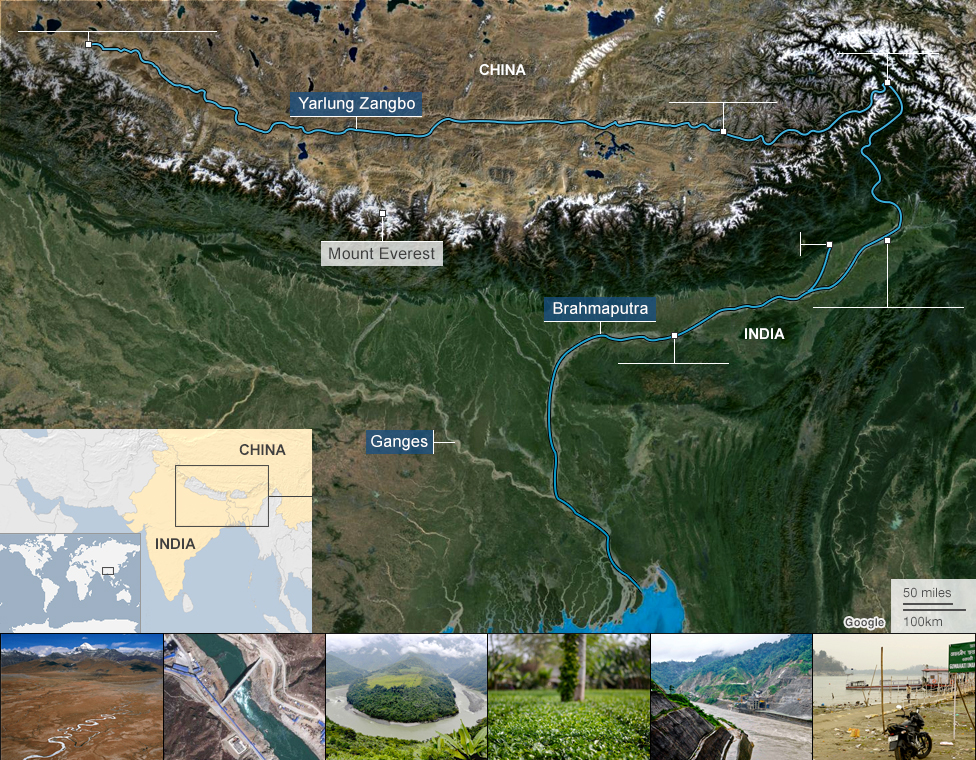 In Assam the plans are being greeted with scepticism and some fear.

The fear is that dams upstream could give China great power over their lives. And many in Assam worry whether China has honourable intentions.

Brahmaputra voices: What next for their river?

After a landslide in China in 2000, the river was blocked for several days, unknown to those downstream.

When the water forced its way past the blockage Assam faced an oncoming torrent. There was no advance warning. There are concerns this could happen more frequently.

Some also believe that China may divert water to its parched north - as it has done with other southern rivers.

India's central government says China has given them assurances about the new Tibetan dams.

"Our foreign ministry has checked with China and we have been told that the flow will not be affected, and we will make sure that the people's lives are not affected by the dams," Paban Singh Ghatowar, minister for the development of north-eastern India, told the BBC.

By engaging in a race to dam the Brahmaputra as quickly as possible, China and India will cause cumulative environmental impacts beyond the limits of the river's ecosystem

Do massive dams ever make sense?

Beijing says the dams it is building on the Tibetan stretch of the river will ease power shortages for people in that region.

"All new projects will go through scientific planning and feasibility studies and the impact to both upstream and downstream will be fully considered," China's foreign ministry told the BBC.

It said three new dams at Dagu, Jiacha, and Jeixu were small-scale projects: "They will not affect flood control or the ecological environment of downstream areas," the foreign ministry said.

Despite the statements, there is no official water-sharing deal between India and China - just an agreement to share monsoon flood data.

Experts and interest groups remain as sceptical as local residents.

'Rivers unite us, but dams divide us," says Peter Bosshard, of the International Rivers Network.

He criticises India for ignoring the rights of Bangladesh even as it deals with China's claim on the river.

"By engaging in a race to dam the Brahmaputra as quickly as possible, China and India will cause cumulative environmental impacts beyond the limits of the river's ecosystem, and will threaten the livelihoods of more than 100 million people who depend on the river."

It is hard to know where the truth lies. The dams are hidden from view, on remote valleys and in deep mountain gorges. It is there that the never-ending tension between politics, development and environment is now being played out.