Hundreds of people remain missing as search efforts in New Zealand continue in the aftermath of Tuesday's powerful earthquake in Christchurch.

Officials say 71 bodies have been recovered so far but more are known to still be under the rubble.

Foreign rescue workers are arriving to join the search effort, amid warnings that time is running out for survivors. No-one was found alive overnight.

The 6.3 magnitude quake is the country's biggest disaster in 80 years.

The New Zealand Prime Minster, John Key, has declared a national state of emergency and authorities have imposed a curfew.

Mr Key said the quake had "wreaked death and destruction on a dreadful scale" in the country's second biggest city, six months after a 7.0-magnitude quake hit Christchurch causing much less damage.

Civil Defence Minister John Carter told reporters that 71 bodies have been taken to morgues in the city so far. Officials had previously said 75 people were dead but Mr Carter said this had not yet been confirmed.

"We are aware there are other bodies but we haven't got a number on that," he said.

Mr Carter said earlier reports that up to 300 people were still missing was only "speculation" and that information was coming in from various sources.

Officials say some people reported as missing may simply have been unable to make contact with friends and relatives, he said.

"Police are now acting to ensure that the lists are accurate and that we will have a definitive list of who's missing," the New Zealand Herald quoted Mr Carter as saying.

The director of New Zealand's Ministry of Civil Defence and Emergency Management, John Hamilton, has said rescuers have only a window of two or three days to find people.

The authorities worked through the night to find survivors in an effort which has been hampered by aftershocks, but no-one was rescued from the ruins overnight on Wednesday.

Rescue teams have arrived from Australia, Asia, the US and Britain.

About 120 people have been pulled out of collapsed buildings, with rescuers having to perform amputations on some victims to get them out.

Among the worst hit buildings was the home of Canterbury Television (CTV) - at least 15 staff members are still missing but rescue work was called off as officials said there were no signs of life.

Kento Okuda, a 19-year-old from Japan, had his leg cut off to allow his rescue.

"As we were eating lunch, there was a major shaking, and suddenly the floor fell," he told Japan's Asahi Shimbun newspaper.

"Everyone around me was saying things like 'It hurts' as they fell downward," he said.

"And then I realised I was in total darkness, with my right leg pinned by something so I couldn't move."

Friends and relatives mourned for their loved ones after search efforts were stopped at the CTV building.

Officials said they did not think anyone else was alive beneath the rubble, and that they had to divert their resources elsewhere.

The city's tallest hotel and surrounding area was cordoned off as rescue officials feared the hotel could fall on top of them.

"It's incredibly dangerous. If it hits the ground it will create a significant shock wave," Reuters quoted local mayor Bob Parker as saying.

At the Pyne Gould Guinness building, cheers were heard on Wednesday as office worker Ann Bodkin was pulled out alive after being trapped for more than 24 hours, and reunited with her waiting husband.

Emergency shelters have been set up and schools have been closed until buildings are assessed for risk. 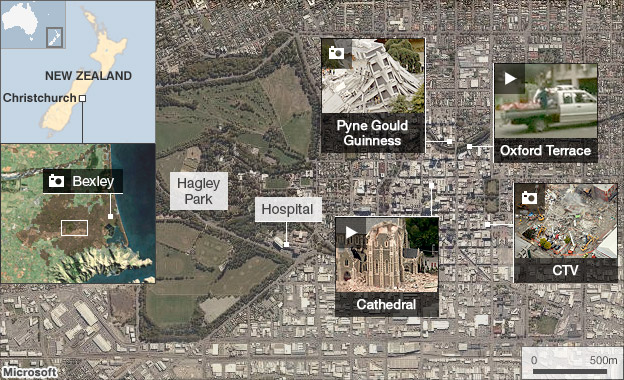 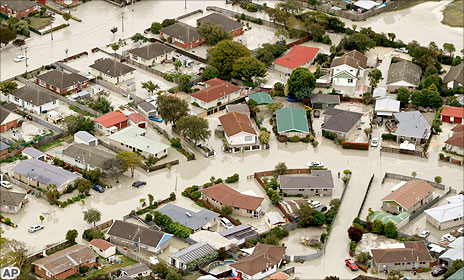 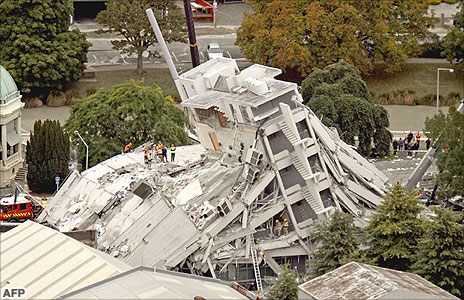 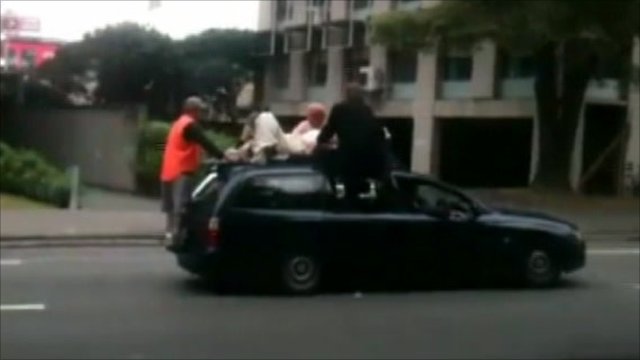 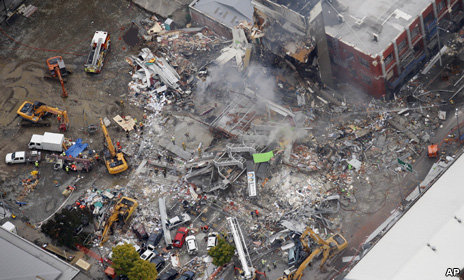 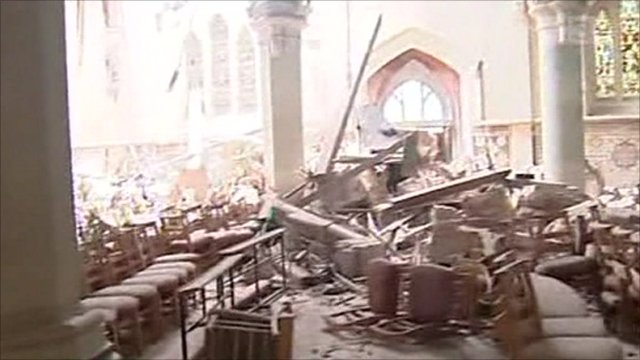 Analysts have estimated the total cost of damage at about $12bn (£7.4bn), according to the Associated Press news agency.

About 80% of people in the city of about 350,000 are without water, reports the New Zealand Herald.

The earthquake struck at a shallow depth of 5km (3.1 miles) on Tuesday at 1251 local time (2351 GMT on Monday), when the South Island city was at its busiest.

New Zealand experiences more than 14,000 earthquakes a year, of which only around 20 have a magnitude greater than 5.0.

Tuesday's was the country's worst natural disaster since a 1931 quake in Hawke's Bay on the North Island killed 256 people.