Australia has experienced its hottest day on record with the national average temperature reaching a high of 40.9C (105.6F).

The Bureau of Meteorology (Bom) said "extensive" heat on Tuesday exceeded the previous record of 40.3C set on 7 January 2013.

Taking the average of maximum temperatures across the country is the most accurate measure of a heatwave.

The record comes as the nation battles a severe drought and bushfire crisis.

Forecasters had predicted the most intense heat would come later in the week, meaning the record could be broken again.

As hundreds of fires rage, Prime Minister Scott Morrison has been criticised for his response to the natural disasters and his government's climate policies.

Why has this happened now?

Australia heated up this week as a mass of hot air swept east across the continent, with meteorologists forecasting "severe to extreme heatwave conditions".

Several individual heat records for towns and cities have already been shattered. On Tuesday, places across the nation's centre recorded temperatures above 45C.

At the start of the week, Perth, the capital of Western Australia, recorded three days in a row above 40C - a record for December.

The dominant climate driver behind the heat has been a positive Indian Ocean Dipole (IOD) - an event where sea surface temperatures are warmer in the western half of the ocean, cooler in the east.

The difference between the two temperatures is currently the strongest in 60 years. The warmer waters cause higher-than-average rains in the western Indian Ocean region, leading to flooding, and drier conditions across South East Asia and Australia.

But Australia has been enduring a drought for a long time - several years in some places. Bom says the dry soil has meant less evaporation - which would normally exert a cooling influence on the landscape.

What is climate change doing to Australia?

According to Bom, Australia has warmed overall by just over 1C since 1910, with most of the heating occurring since 1950.

Nine of Australia's top 10 hottest years on record have all occurred since 2005.

Officials predict that 2019, on the temperatures recorded so far, will be among the four warmest years on record. Bom says it's expecting national mean temperatures to be at least 1.3C above the long-term average of 27.5C. 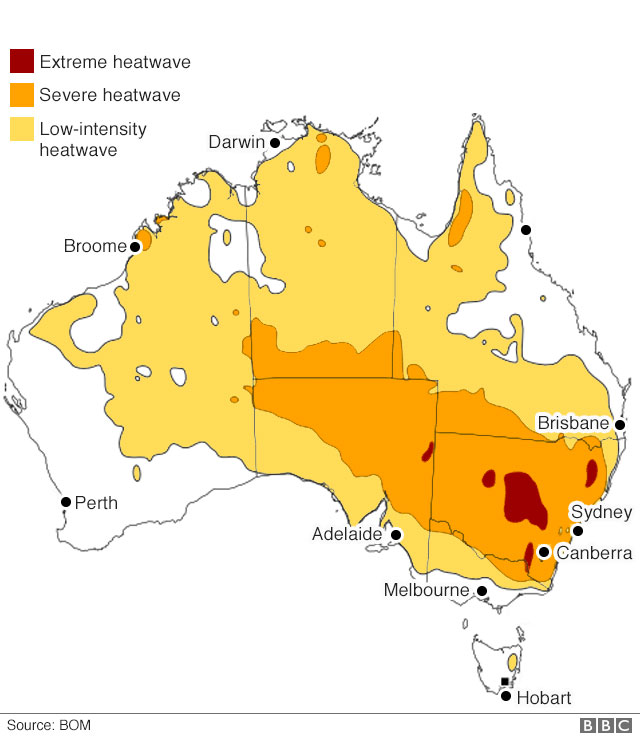 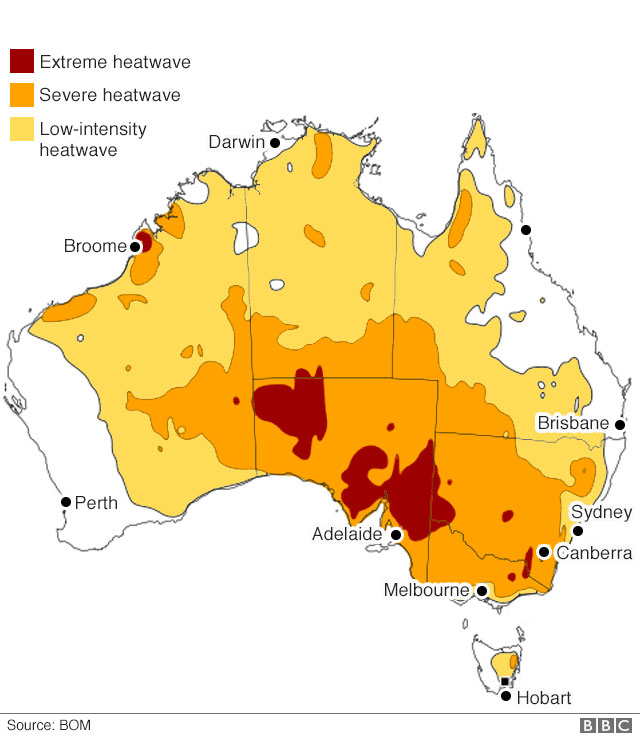 That heat has helped create the conditions for natural disasters like bushfires, droughts and floods - which have always happened in Australia - to be more frequent and more severe.

Vast areas of the nation are struggling through a second and third year of drought. According to the measurements for 2019 so far, the year has been Australia's driest in over a century.

Australia's conservative government has been criticised both at home and internationally for what's seen as an inadequate climate record.

The country is one of the highest emitters of carbon pollution per capita, largely because it is still heavily reliant on coal-fired power. The UN has also said it is among the minority of G20 nations falling short on its emissions promises.

The government has been reluctant to talk about the role of climate change in exacerbating bushfires, a stance which has sparked protests.

Critics have accused Mr Morrison of being "missing in action" on the issue. That pressure escalated this week after it emerged he was overseas on holiday.

After local media reported he was in Hawaii, phrases such as #WhereTheBloodyHellAreYou, #WhereisScoMo and #FireMorrison trended on Twitter.

How damaging can heatwaves be in Australia?

Heatwaves are Australia's deadliest natural disaster and have killed thousands more people than bushfires or floods.

Last summer (2018-2019) was recorded as the nation's hottest on record, as average temperatures soared past 30C (86F) for the first time.

At least five of the days were recorded among the nation's top 10 hottest on record.

The heat, which was concentrated over one fortnight in January, caused mass wildlife deaths, sparked bushfires and led to a rise in hospital admissions.

It also sparked furious political discussion about the nation's energy grid, after densely populated city areas were forced to endure blackouts amid the heat.

What does this mean for the fires?

Bom and fire authorities have warned that the record temperatures have made the fires more volatile and harder to fight.

No other option but to step back, says Harry

The prince says he and Meghan wanted to continue serving the Queen, but "that wasn't possible".

What's Ukraine got to do with Trump's impeachment?