A crucial vote in Cyprus' parliament on a bailout that has sparked huge public anger has been delayed until Tuesday.

President Nicos Anastasiades has been meeting MPs in Nicosia and has indicated he wants the terms amended.

The 10bn-euro ($13bn; £8.6bn) bailout agreed with the EU and IMF had demanded that all bank customers pay a one-off levy and led to heavy cash withdrawals.

The president's party has 20 seats in the 56-member assembly and needs other parties' support to ratify the deal.

If Cyprus' president wants to change something regarding the levy on bank deposits, that's in his hands

The debate and vote in Cyprus' parliament has now been postponed until 18:00 local time (16:00 GMT) on Tuesday. It was initially to have been held on Sunday.

President Anastasiades is at present holding talks with ministers and lawmakers at the parliament building in Nicosia, which has been cordoned off to prevent protests.

The BBC's Mark Lowen, in Nicosia, says there are suggestions Mr Anastasiades is looking at lowering the cost to those with smaller savings.

Under the currently agreed terms, depositors with less than 100,000 euros in Cyprus accounts would have to pay a one-time tax of 6.75%. Those with sums over that threshold would pay 9.9%.

Reform of how to mend broken banks, which has been negotiated globally and in Europe since the crash of 2007-8, has been based on two central principles.

First, that the savings of ordinary people should be protected, up to a high threshold - or 100,000 euros in the European Union for example.

And that financial institutions which lend to banks by buying their bonds should incur losses when banks are bailed out: bondholders should, to use the jargon, be bailed in, as part of resolution plans.

So what is seen by many as profoundly shocking about the terms of the rescue of Cyprus by the rest of the eurozone and the International Monetary Fund is that both of these principles have been broken.

Our correspondent says the president may want to lower the former rate to 3%, while raising the levy on the larger depositors to 12.5%.

Joerg Asmussen, a member of the European Central Bank's governing council, said there could be a change to the deal.

He said: "It's the Cyprus government's adjustment programme. If Cyprus' president wants to change something regarding the levy on bank deposits, that's in his hands. He must just make sure that the financing is intact."

German government spokesman Steffen Seibert echoed his comments, saying: "How the country makes its contribution, how it makes the payments, is up to the Cyprus government."

Mr Anastasiades insists that without the bailout Cyprus could face bankruptcy and a possible exit from the eurozone.

He said on TV on Sunday: "I fully share the unhappiness caused by a difficult and painful decision."

He also said it was the worst crisis since Turkey invaded in 1974.

The banks are closed on Monday for a national holiday and could remain shut on Tuesday to avoid mass withdrawals.

Under the bailout's current terms, depositors will be compensated with the equivalent amount in shares in their banks, and Mr Anastasiades promised that those who kept deposits in Cypriot banks for the next two years would be given bonds linked to revenues from natural gas.

Cyprus announced the discovery of a field containing between 5 and 8 trillion cubic feet of natural gas under the Mediterranean Sea in 2011 but Turkey disputes its drilling rights.

Reports have suggested that eurozone leaders, particularly in Germany, insisted on the levy because of the large amount of Russian capital kept in Cypriot banks, amid fears of money-laundering.

However, German Finance Minister Wolfgang Schaeuble said he and the International Monetary Fund had been in favour of "respecting the deposit guarantee for accounts up to 100,000" euros. 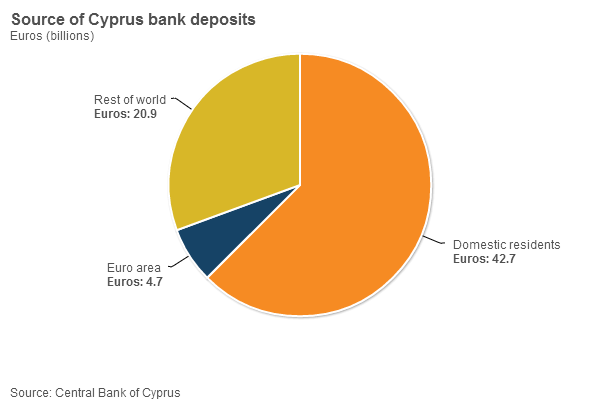 Russian presidential spokesman Dmitry Peskov said on Monday: "Assessing the possible decision of imposing additional tax by Cyprus on deposits, [President] Putin said that this decision, if taken, would be unfair, unprofessional and dangerous."

Prime Minister Dmitry Medvedev said: "It looks simply like the confiscation of other people's money."

The Moody's ratings agency estimates that, at the end of 2012, Russian banks had placed $12bn in Cypriot banks, with corporate deposits at $19bn. So Russian corporate and individual investors could lose up to $2bn.

The proposed savings levy has drawn criticism from economic analysts. Michael Hewson, of CMC Markets, told the Press Association: "If European policymakers were looking for a way to undermine the public trust that underpins the foundation of any banking system they could not have done a better job."

It is clear that negotiators of the bailout in Brussels drastically underestimated the reaction in Cyprus, says our correspondent, Mark Lowen.

A tiny eurozone economy feels it is being blackmailed by the most powerful, and the growing resentment will do nothing to foster European solidarity, he adds.

If the levy goes ahead, it will affect many non-Cypriots with bank accounts, including UK expatriates.

However, depositors in the overseas arms of Cypriot banks will not be hit. Bank of Cyprus UK and Laiki Bank UK both confirmed on their websites that there would be no impact.

Chancellor George Osborne said the UK would compensate any government employees and military personnel whose bank accounts were affected.

Some 400 people from the US were among those confined on the Diamond Princess near Tokyo.

'Meeting the bombers who killed my mum'