On the day Irina Slavina decided to kill herself, Alexei noticed nothing unusual in his wife. It was her mother's 70th birthday and Irina had baked her an apple charlotte to celebrate.

At 13:34 Alexei rang her mobile and the couple spoke briefly: "Just normal things, like when she'd be back." Two hours later he got a call to say that Irina had set herself on fire beneath the walls of the local Interior Ministry.

Her last post on Facebook read: "I ask you to blame the Russian Federation for my death."

In Nizhny Novgorod, 400 km (250 miles) east of Moscow, those closest to Irina Slavina berate themselves that no-one had known what the journalist was planning, so couldn't stop her.

But they are convinced it was an act of deliberate political protest, not desperation.

"Irina Slavina and depression have nothing in common!" her friend of many years, Irina Enikeeva, told me. "She was positive, an 'energiser'; a woman full of kindness, warmth and light."

Shortly after her death, video footage, apparently from a CCTV camera, began circulating online. It clearly shows Irina Slavina in front of the giant, concrete headquarters of the Interior Ministry.

She takes a seat among the three bronze figures on a bench: a monument to Russian police officers through the ages.

The flames first appear on her left arm then rush up her sleeve to engulf her entire body in seconds. A passer-by tears off his jacket and tries, in panic, to smother the fire but the dying woman pushes him away twice, before collapsing.

'Will my sacrifice be pointless?'

"It was clear she was utterly determined to do this," says another friend, pro-democracy activist Mikhail Iosilevich. "The fact she decided on such an extreme act means it's not suicide, but a form of protest: calculated and planned."

A year ago, Irina had even floated the idea on Facebook. She asked whether, if she set herself alight, she would bring Russia "even a little bit more quickly to a bright future? Or will my sacrifice be pointless?"

Her readers thought it was a joke.

A mother of two who met her husband as a teenager, walking their dogs, Irina Slavina began her professional life as a school teacher. It was a bad fit: Alexei told me she didn't like the rules.

'Changing the world for the better'

So, in 2003, she marched into a local newspaper and demanded a job.

Alexei says she felt "freer" in her new role. 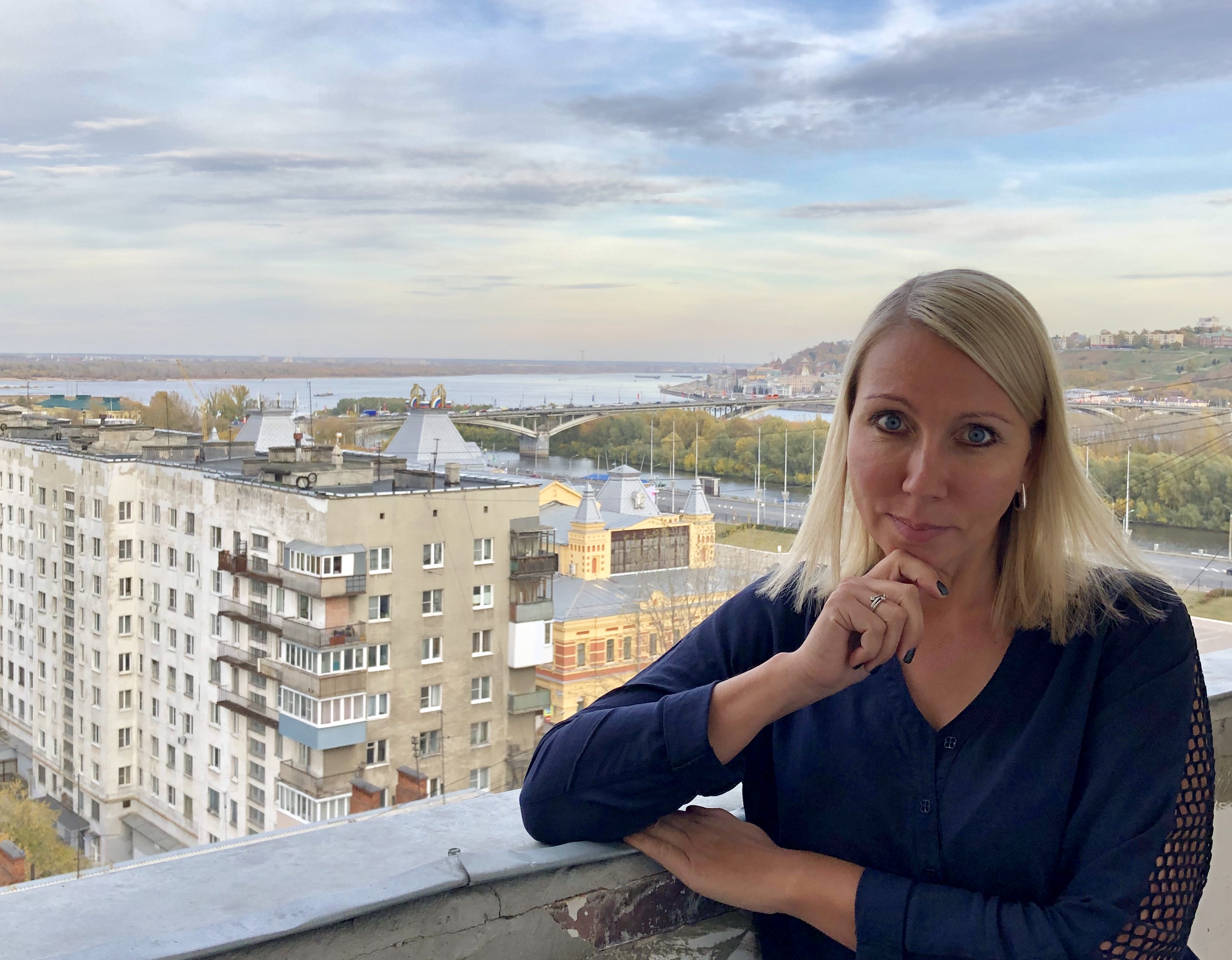 She thought she could change something with her articles. For her, journalism wasn't about rewriting press releases, it was about changing the world for the better

But as press freedoms in Russia were squeezed ever further under President Vladimir Putin, Irina's principles became a problem and she was eventually sacked. "All the pressure over how to spin stories for the authorities got on her nerves," her friend says.

So in 2015, she set up Koza.Press, supported by Mikhail Iosilevich, and began building a reputation as the only independent journalist in town. Others might write the odd, hard-hitting article, but Slavina was persistent and unflinching.

Soon the authorities were taking note.

"She wrote about excesses by the security forces and the authorities. She wrote tough, direct and honest reports and they didn't like that. So she was in their sights," Evgeny Gubin says.

The lawyer has a thick wad of papers in his office from all the court cases in which he defended her.

She was charged with organising an illegal protest, working for a banned pro-democracy group when she reported on a political forum, and spreading fake news when she wrote about a local outbreak of coronavirus.

When she objected - in colourful language - to a memorial plaque to Stalin, she was fined 70,000 roubles (£700; €770) for insulting local communists' feelings.

"There were probably 10 or 12 administrative cases against her and they all ended in fines," says Evgeny Gubin. "In the past 18 months, the prosecutions were constant."

Once seen as a leading light in Russia's transition to democracy, Nizhny Novgorod has since morphed into a "swamp" of indifference, according to the handful of civil society activists who remain.

By contrast, it's now notorious for a very active "anti-extremism" department in the local police, largely focused on suppressing political opposition.

With minimal income from Koza.Press, Irina Slavina had to crowdfund to pay the hefty fines.

"Of course, I link it to my journalism," she said of the cases against her, in a short clip posted on YouTube. "I see it as revenge."

Her husband, a former sailor, says the two didn't discuss her journalism often in detail. But Alexei admits the court cases were a great strain on Irina and 'impossible to win, in our country'.

"She was under so much pressure for telling the truth. It really bothered her," he confides.

The day before Irina took her life, the pressure increased.

She and Alexei were woken at 6am by 12 investigators and armed police at the door. For more than four hours, they turned the flat upside down, conducting a search.

It was part of a criminal case against Irina's friend, Mikhail Iosilevich, a "pastor" who holds weekly gatherings in his mockingly titled Church of the Flying Spaghetti Monster to encourage free thinking.

But Mikhail, who wears a colander on his head at meetings, is now accused of threatening Russia's state security, after hosting training sessions for local election monitors. Investigators claim the event was run by Open Russia, a group banned for its ties to President Putin's loudest critic-in-exile, Mikhail Khodorkovsky.

Irina Slavina and six other activists are listed as "witnesses" in the case, often just a step on the path to being prosecuted. Some believe it's designed to cow all critics in Nizhny; others, including Irina, link it to protests over reconstruction of a local park amid accusations of high-level corruption.

For Koza.Press's editor, the police search appears to have been the last straw.

"It was another slap in the face from our country," her husband tells me by phone as he heads out of town to "get away from everything" with his family.

"Irina was really affected by it. She was furious."

A few hours after Irina's death, the local branch of the Investigative Committee ruled out any link between her suicide and their search of her flat. The journalist had not personally been accused of anything, it pointed out.

The first couple of nights after the journalist's death, city cleaners swept away the flowers people laid at the spot. They're letting them remain now, turning a monument to law enforcers into a shrine to a woman who fought abuse and injustice - including in their ranks.

Two officers patrol the pavement, keeping an eye on those who pause to look and contemplate.

Some haven't even heard the news; others are baffled and dismayed and some wonder whether she was trying to shock the city out of its indifference.

Irina's husband can't explain it, and says he's not trying to - for now.

"It won't bring her back, I just have to accept her decision," he says. "But I don't want her death to have been in vain."

Are you affected by this?

If you or someone you know are feeling emotionally distressed, The Samaritans helpline is available 24 hours a day for anyone in the UK struggling to cope. It provides a safe place to talk where calls are completely confidential.

Further details of helplines can be found here.