He proposed an independent Palestinian state and the recognition of Israeli sovereignty over West Bank settlements.

Standing alongside Israeli PM Benjamin Netanyahu at the White House, Mr Trump said his proposals "could be the last opportunity" for Palestinians.

Palestinian President Mahmoud Abbas dismissed the plans as a "conspiracy".

"I say to Trump and Netanyahu: Jerusalem is not for sale, all our rights are not for sale and are not for bargain. And your deal, the conspiracy, will not pass," he said in a televised address from Ramallah in the West Bank.

The blueprint, which aims to solve one of the world's longest-running conflicts, was drafted under the stewardship of President Trump's son-in-law Jared Kushner.

Thousands of Palestinians protested in the Gaza Strip earlier on Tuesday, while the Israeli military deployed reinforcements in the occupied West Bank.

The joint announcement came as both Mr Trump and Mr Netanyahu faced political challenges at home. Mr Trump is the subject of an impeachment trial in the US Senate while the Israeli PM on Tuesday dropped his bid for immunity on corruption charges. Both men deny any wrongdoing.

David Friedman, the US ambassador to Israel, said that the timing of the announcement was not tied to any political development, adding it had been "fully baked" for some time.

Meanwhile, reports said Mr Netanyahu was planning to press ahead with annexing 30% of the occupied West Bank, with a cabinet vote due on Sunday.

More than 400,000 Israelis live in West Bank settlements. Those settlements are considered illegal under international law, although Israel disputes this.

Mr Friedman said Israel did "not have to wait at all" to move ahead with annexation.

What are Trump's key proposals?

"My vision presents a win-win opportunity for both sides, a realistic two-state solution that resolves the risk of Palestinian statehood to Israel's security."

"Palestinians are in poverty and violence, exploited by those seeking to use them as pawns to advance terrorism and extremism. They deserve a far better life," Mr Trump said.

This is what a future State of Palestine can look like, with a capital in parts of East Jerusalem. pic.twitter.com/39vw3pPrAL

He also indicated that the West Bank would not be cut in half under the plan.

"We will also work to create a contiguous territory within the future Palestinian state, for when the conditions for statehood are met, including the firm rejection of terrorism," he said.

Israeli officials said Mr Netanyahu would fly to Moscow on Wednesday to discuss the proposals with Russian President Vladimir Putin.

A plan that overturns Palestinian aspirations

Until now all of the most difficult aspects of an Israeli-Palestinian peace deal - the so-called final status issues - like borders; the future of Israeli settlements in the West Bank; the long-term status of Jerusalem; and the fate of Palestinian refugees, were to be left for face-to-face talks between the Israelis and Palestinians themselves.

Not any longer. The deal proposed by President Trump and enthusiastically endorsed by Prime Minister Netanyahu essentially frames all of these issues in Israel's favour.

The Palestinians were not just absent from this meeting - they have boycotted the Trump administration ever since it unilaterally moved its embassy to Jerusalem. But they have essentially been presented with an ultimatum - accept the Trump parameters or else, and they have been given some four years to come around.

While President Trump is offering the Palestinians a state it would be a much truncated one. No Jewish settlers will be uprooted and Israeli sovereignty will apparently be extended to the settlement blocs and the Jordan Valley. The Palestinians might have a capital in the East Jerusalem suburbs. This "take it or leave it offer" will appal many long-standing students of the region. The question now is not so much what benefit this deal might bring but how much damage it may do by over-turning Palestinian aspirations.

What reaction has there been?

In his address, President Abbas said it was "impossible for any Palestinian, Arab, Muslim or Christian child to accept" a Palestinian state without Jerusalem as its capital.

"We say a thousand times, no, no, no," he said. "We rejected this deal from the start and our stance was correct."

The militant Palestinian Islamist group Hamas, which controls the Gaza Strip, also rejected the deal which it said aimed "to liquidate the Palestinian national project".

The UN said it remained committed to a two-state solution based on the borders in place before the 1967 war, when Israel seized the West Bank and Gaza.

A spokesman for Secretary General António Guterres said the UN wanted a peace deal on the basis of UN resolutions, international law and bilateral agreements.

It said Palestinians would be relegated "to small, enclosed, isolated enclaves, with no control over their lives".

Israel's Peace Now organisation said the plan was "as detached from reality as it is eye-catching".

"The plan's green light for Israel to annex the settlements in exchange for a perforated Palestinian state is unviable and would not bring stability," it said.

British Foreign Secretary Dominic Raab urged the Palestinians to give the plans "genuine and fair consideration and explore whether they might prove a first step on the road back to negotiations".

The Palestinians broke off contacts with the Trump administration in December 2017, after Mr Trump decided to recognise Jerusalem as Israel's capital and move the US embassy to the city from Tel Aviv.

Since then, the US has ended both bilateral aid for Palestinians and contributions for the UN Relief and Works Agency for Palestine Refugees (UNRWA).

And in November, Secretary of State Mike Pompeo said the US had abandoned its four-decades-old position that Jewish settlements in the West Bank were inconsistent with international law.

The Arab League will convene an urgent meeting on Saturday. 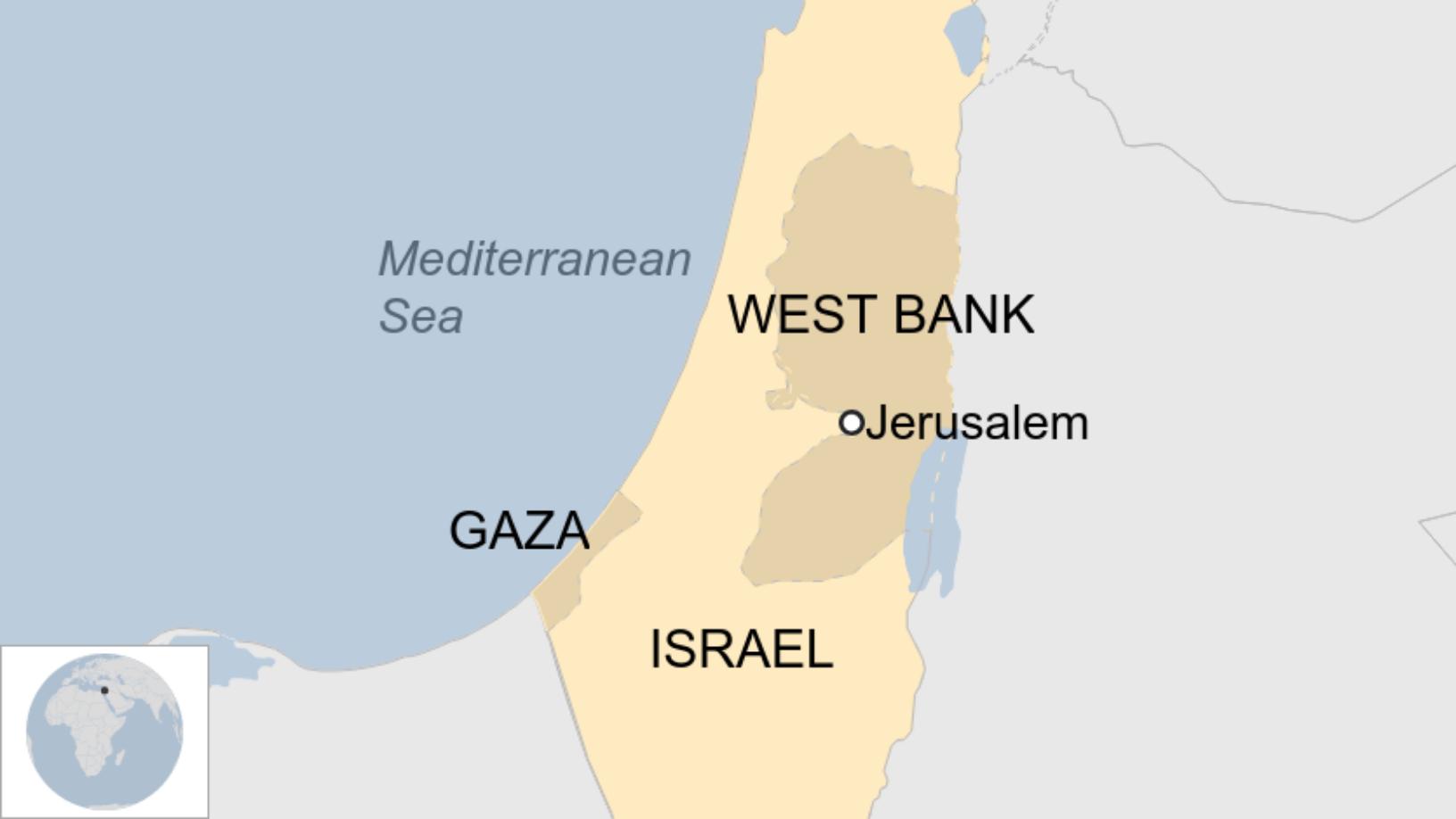 What are the issues at stake?

Of all the conflicts in the Middle East, that between Israel and the Palestinians has been the most intractable. Although the two sides signed a breakthrough peace accord in 1993, more than a quarter of a century on the two sides are arguably as far apart as ever.

Jerusalem: Both Israel and the Palestinians hold competing claims to the city. Israel, which occupied the formerly Jordanian-held eastern part in 1967, regards the whole of Jerusalem as its capital. The Palestinians insist on East Jerusalem - home to about 350,000 of their community - as the capital of a hoped-for independent state.

Palestinian statehood: The Palestinians want an independent state of their own, comprising the West Bank, Gaza and East Jerusalem. Israeli prime ministers have publicly accepted the notion of a Palestinian state alongside Israel but not what form it should take. Benjamin Netanyahu has said any Palestinian state should be demilitarised with the powers to govern itself but not to threaten Israel.

Recognition: Israel insists that any peace deal must include Palestinian recognition of it as the "nation-state of the Jewish people", arguing that without this Palestinians will continue to press their own national claims to the land, causing the conflict to endure. The Palestinians says what Israel calls itself is its own business, but to recognise it as the Jewish state will discriminate against Israel's Arab population of Palestinian origin, who are Muslims, Christians and Druze.

Borders: Both sides have fundamentally different ideas as to where the boundaries of a potential Palestinian state should be. The Palestinians insist on borders based on ceasefire lines which separated Israel and East Jerusalem, the West Bank and Gaza between 1949 and 1967. Israel says those lines are militarily indefensible and were never intended to be permanent. It has not said where borders should be, other than making clear its own eastern border should be along the Jordan River.

Settlements: Since 1967, Israel has built about 140 settlements in the occupied West Bank and East Jerusalem, as well as 121 outposts - settlements built without the government's authorisation. They have become home to some 600,000 Israeli Jews. Settlements are considered illegal by most of the international community, though Israel disputes this. Palestinians say all settlements must be removed for a Palestinian state to be viable. Mr Netanyahu has vowed not only to never to uproot any settlements but to bring them under Israeli sovereignty.

Refugees: The UN says its agencies support about 5.5 million Palestinian refugees in the Middle East (the Palestinian Authority says there are up to 6 million), including the descendants of people who fled or were expelled by Jewish forces from what became Israel in the 1948-49 war. Palestinians insist on their right to return to their former homes, but Israel says they are not entitled to, noting that such a move would overwhelm it demographically and lead to its end as a Jewish state.

* entries are selective and abridged