Syria war: Turkish operation in Idlib ‘only a matter of time’

Turkey's president has said it is "only a matter of time" before it launches an operation to stop a Syrian army assault on opposition-held Idlib province.

Recep Tayyip Erdogan warned that he was determined to transform the border area into a safe place "at any cost".

Syria's government and its ally Russia have rejected his demand to pull back to ceasefire lines agreed in 2018.

The offensive has displaced some 900,000 civilians, including half a million children, since 1 December.

Hundreds have been killed during that period, the vast majority of them victims of attacks by the Syrian government and its allies, according to the UN. Children are also dying from the cold, including a one-year-old girl and a seven-month-old boy.

"Hostilities are now approaching densely populated areas. People are on the move in freezing temperatures in search of safety which has become ever more difficult," UN spokesman Stéphane Dujarric said on Tuesday.

The UN's humanitarian chief Mark Lowcock warned that if the fighting reached these heavily populated areas, the human cost would be instant and huge.

Secretary General António Guterres has called for an immediate ceasefire. 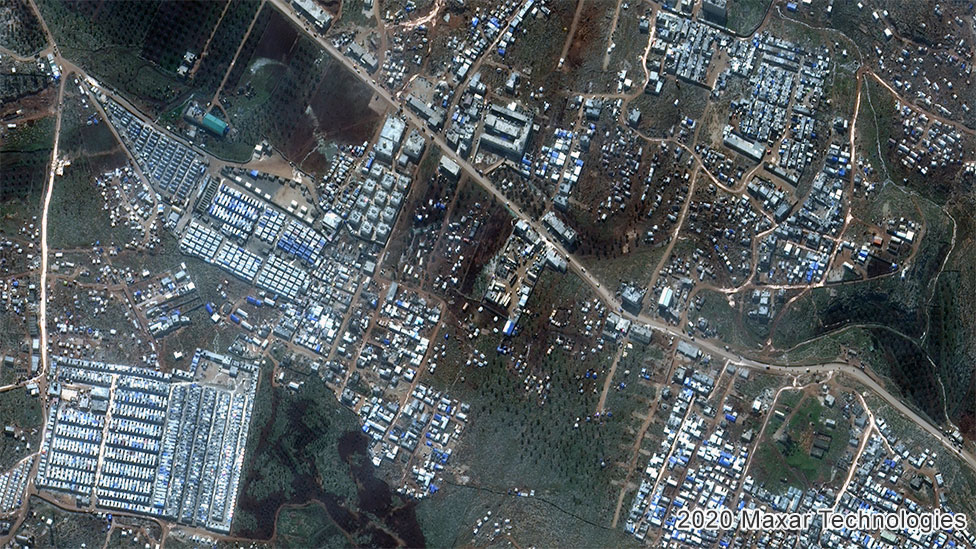 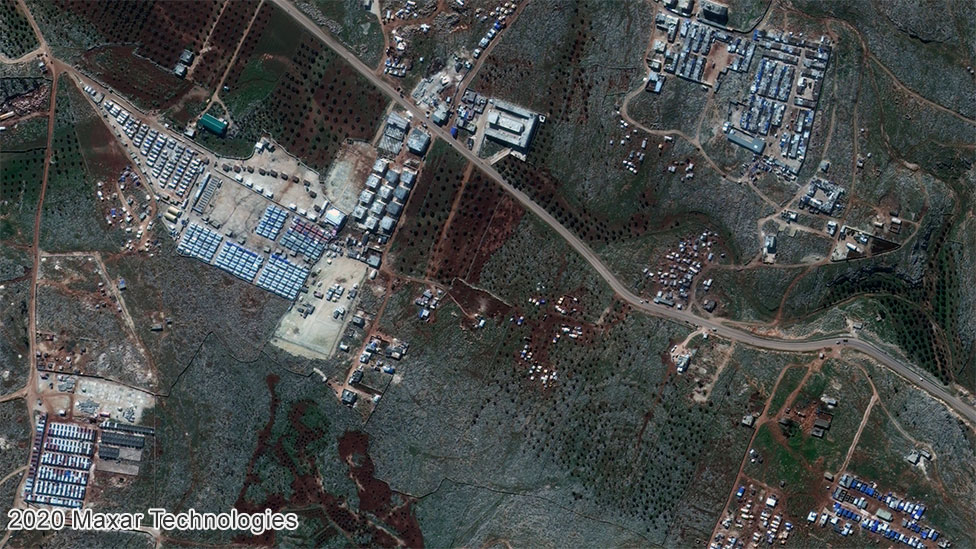 Idlib is the last stronghold of the rebel and jihadist fighters who have been trying to overthrow Syrian President Bashar al-Assad since 2011.

In recent years an influx of displaced people has doubled its population to about three million, including one million children.

Turkey, which backs the opposition to Mr Assad and fears another massive influx of Syrian refugees, has deployed troops to observation posts in Idlib under an agreement with Russia that set up a de-escalation zone - the 2018 Sochi accord.

However, it has failed to stop the Syrian army retaking large parts of the province with the help of Russian air strikes and Iran-backed militiamen.

The latest government offensive and the ensuing flight of civilians towards the Turkish border prompted Turkey's military to start reinforcing its positions in Idlib in January. Thousands of soldiers and hundreds of tanks have since arrived.

Earlier this month, after several Turkish personnel were killed in artillery attacks that Turkish officials blamed on the Syrian army, Mr Erdogan told the government to pull back to the line of Turkish observation posts or face military action.

On Tuesday, a Turkish presidential spokesman said talks between Turkish and Russian delegations in Moscow had not yielded a "satisfactory result". A Russian proposal to "redraw" the de-escalation zone was not acceptable and it was "out of the question" for Turkey to move its observation posts, Ibrahim Kalin explained.

In a speech to lawmakers from his AK Party on Wednesday, Mr Erdogan warned: "We are entering the last days for the [Syrian] regime to stop its hostility in Idlib."

"We are making our final warnings," he said. "We did not reach the desired results in our talks [with Russia]. The talks will continue, but it is true that we are far from meeting our demands at the table.

"Turkey has made every preparation to carry out its own operational plans. I say that we can come at any point. In other words, the Idlib offensive is only a matter of time," the president added.

But Dmitry Peskov added that Russia would not object if the Turkish military took action against the "terrorist groups in Idlib", in line with the Sochi accord.

Turkish forces and allied Syrian rebels have carried out three operations in northern Syria since 2016, though not directly against Russian-backed government forces.

Last October, they drove US-backed Kurdish militia fighters from territory between the towns of Tal Abyad and Ras al-Ain. Some 300,000 people were displaced and 120 civilians were killed during the operation, according to a monitoring group.

UN human rights chief Michelle Bachelet expressed horror at the scale of the humanitarian crisis in north-western Syria on Tuesday, saying it was cruel beyond belief that displaced civilians living in makeshift camps were being attacked.

"Entire families, some who have fled from one corner of Syria to the other over the course of the past decade, are tragically finding that bombs are part of their everyday life," she told reporters in Geneva. "How can anyone justify carrying out such indiscriminate and inhumane attacks?"

Since 1 January, UN officials have recorded the deaths of 299 civilians. Almost all of those deaths were caused by the Syrian government and its allies.

In addition, 10 medical facilities and 19 educational buildings have either been directly hit or affected by strikes close by. Displacement camps have also been hit.

Asked if they were being deliberately targeted by the government and Russia, Ms Bachelet's spokesman said: "The sheer quantity of attacks on hospitals, medical facilities and schools would suggest they cannot all be accidental."

Ms Bachelet called on the Syrian government and its allies to allow humanitarian corridors into conflict areas, and to allow for the safe passage of civilians.

In a separate development on Wednesday, the first passenger flight for more than eight years between Damascus and Syria's second city, Aleppo, took place.

Syrian state media quoted the head of Aleppo airport saying the resumption of the 35-minute flight was a result of the army's victory against terrorism.

Meanwhile, two Oxfam aid workers have been killed in the southern province of Deraa, the charity has said.

Wissam Hazim and Adel al-Halabi were travelling in a vehicle when it was attacked by a so-far unidentified armed group.

The US president says he does not want to be seen in one, despite Centers for Disease Control guidance.