Before 2001 the main business of the Karzai family lay in running a successful chain of Afghan-themed restaurants in the United States.

But since exiled dissident Hamid Karzai secured Washington's backing and became president of Afghanistan after the downfall of the Taliban, a number of his brothers have also achieved prominence as key power-brokers, politicians and businessmen. 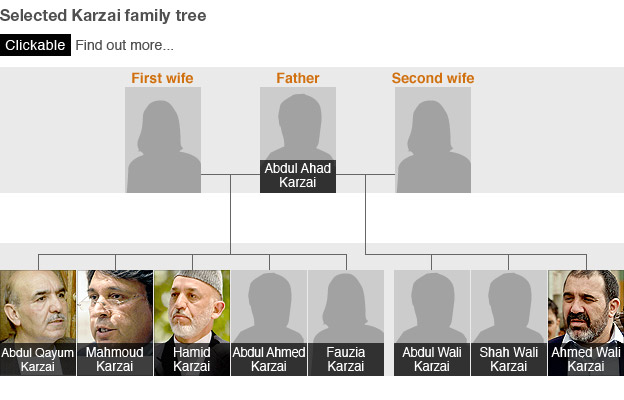 Head of the Popalzai Pashto tribe, Abdul Ahad Karzai became Deputy Speaker of the National Assembly of Afghanistan during the reign of King Zahir Shah. In the late 1970s he became an outspoken critic of the Soviet-backed communist government and was imprisoned for three years. Much of the Karzai family went into exile. In later years Karzai repeatedly spoke out against the Taliban but his opposition cost him his life in 1999 when, aged 77, he was assassinated outside a mosque in Quetta by two Taliban gunmen.

Qayum Karzai spent much of his earlier life in the US and built up the family restaurant business along with Mahmoud Karzai. He was elected to the Afghan National Assembly in 2004, but gave up his seat in 2008 amid criticism of his attendance record. In recent years Qayum is reported to have been involved in some efforts to negotiate with the Taliban.

Emigrating to the US in 1976, Mahmoud Karzai established a number of Afghan restaurants along with his brother Qayum. His business interests in Afghanistan reportedly include the country's only cement factory and Toyota dealership. He is also a prominent shareholder in the troubled Kabul Bank. In 2010 the Washington Post reported that Karzai was being investigated by US federal authorities over his financial activities, though he denied any impropriety.

Installed as interim president following the ousting of the Taliban by US-led forces in Autumn 2001, Hamid Karzai became Afghanistan's first popularly-elected leader in 2004. He won re-election five years later in controversial circumstances amid accusations of voting irregularities. After much of his family went into exile in the US in the late 1970s, Hamid Karzai studied in India and then became involved with the movement opposed to the Soviet occupation from Pakistan. When the Russians left, he served as deputy foreign minister to President Rabbani, but went into exile again in 1994 after a dispute with the Tajik dominated government. Karzai's moderate outlook, lobbying for a broad-based Afghan goverment and support among the ethnic Pashto majority were major factors in him achieving US support in 2001. His early years as president saw him win praise for his statesmanship and success in attracting billions of dollars of reconstruction funds from the international community. However detractors have long accused him of being a US stooge and having little real control of the country beyond Kabul. Criticism has mounted recently, with the resurgence of the Taliban and growing violence. Karzai has survived four assassination attempts since 2002.

Reported by the New York Times to have worked at Baltimore-Washington International Airport prior to 2001, he is now believed to work for the Afghanistan Investment Support Agency in Kabul.

Abdul Wali Karzai is a biochemistry professor based at Stony Brook University in New York.

One of Hamid Karzai's younger brothers, Shah Wali Karzai is based in Kandahar and is reported to have his own engineering consultancy business and property interests.

Little is known about Hamid Karzai's only sister other than that she is involved in running the family's restaurant business in the United States.

The president's younger, well-connected and often controversial half brother played a key role in propping up the Karzai government in fractious southern Afghanistan. He returned to the country in late 2001 from the United States, where he had been involved in the family restaurant business, and was elected to the Kandahar Provincial Council in 2005. As he expanded his power base, allegations of corruption surfaced. The New York Times accused him of involvement in the drugs trade - which Karzai denied - while a leaked US embassy cable from 2009 described a situation where he exercised power through a tribal network "in parallel to formal government structures". He was subject to numerous attempts on his life before being shot dead by his bodyguard in July 2011.