Congress approved a humanitarian aid plan for migrants at the US-Mexico border, but the political crisis over how to deal with migrants attempting to reach the US continues.

Migrants continue to die en route to the border, including a Salvadorean father and daughter whose bodies were photographed lying face down in a river near the border. The photo has led to condemnation.

President Donald Trump has repeatedly used the term "invasion" to describe the situation on the US southern border.

In February he declared a "national emergency" in order to force through funding for his planned border wall.

However his opponents say his government has created a "manufactured crisis".

What's happening at the border now?

The number of border apprehensions dropped by 28% in June, according to US authorities.

The decline follows a record number of apprehensions between ports of entry in May - the highest in over a decade. 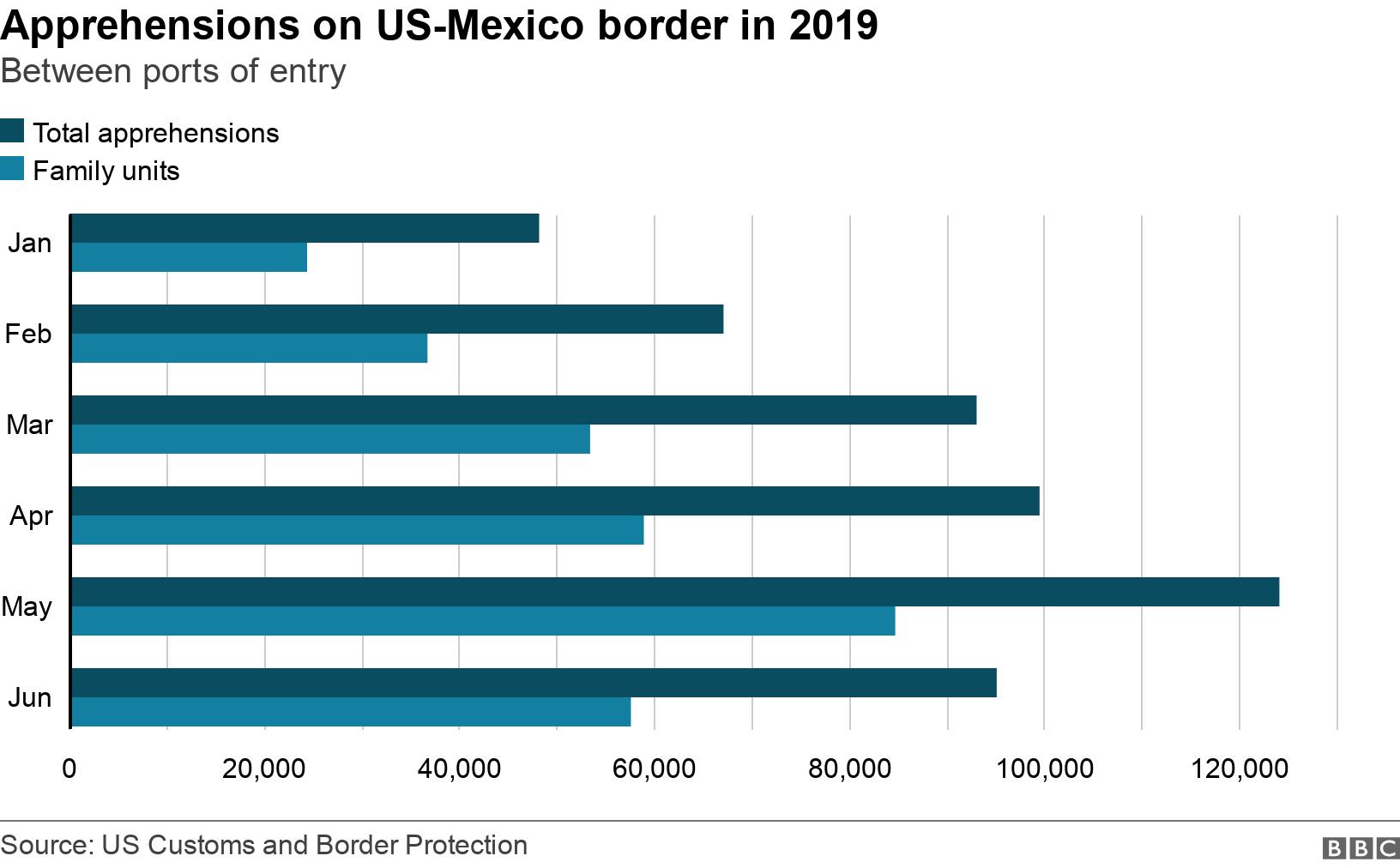 Drops in migrations are typical during the summer months, where temperatures can soar above 32C, but this June saw a sharper decline than previous years.

Trump administration officials have attributed the decrease to new policies with Mexico to curb migration.

How many people are crossing the border illegally?

It's impossible to say for certain, but US Border Patrol says it has made 688,375 southwest border apprehensions since October 2018. The previous US fiscal year there were 303,916, according to US Customs and Border Protection (CBP).

The number of migrants apprehended at the border surged in May to the highest level since 2006, with 132,887 detained - including 11,507 unaccompanied children. It was the first time that detentions had exceeded 100,000 since April 2007.

The UN Missing Migrants project reports that 170 migrants have died or are missing on the US-Mexico border so far in 2019 - including 13 children. Border Patrol figures show that 283 died last year, but human rights activists say the number is likely to be higher.

Looking at the wider picture, until numbers rose this spring, there has been a sharp fall in the number of people arrested in the last 18 years.

But even before the 2019 spike, when migration numbers were in fact at historic lows, Mr Trump described the situation on the border as a national security crisis.

This year's surge in migration is significant, if not the highest ever.

And changing migrant demographics have undoubtedly overwhelmed US agencies - but the situation along the border is a different kind of crisis than what the president described for years.

Apprehension numbers released by the CBP include asylum seekers (a person who applies for refugee status at a US port of entry or from within the country).

Kate Jastram, senior staff attorney for the Center for Gender and Refugee Studies at the University of California Hastings College of the Law, says that families fleeing violence in Central America began to make up a much larger part of border crossings beginning in 2014.

She says that has more to do with conditions in those countries than any immigration policy implemented by the Trump administration.

"Single men from Mexico were by and large not seeking asylum, they were looking for work," says Jastram. "[Now] we have families and children specifically seeking protection."

In November 2018, a caravan of 7,000 migrants arrived at the US-Mexico border, many claiming to be fleeing violence in countries like Honduras, Guatemala and El Salvador. Mr Trump labelled the caravan an "invasion".

Overall, the rate of asylum denials is on the rise in the US and has been for the past six years.

What has the Trump administration done to address all this?

President Trump and his administration have tried a variety of deterrent measures affecting both illegal entrants and asylum seekers in recent years.

"It is an atrocity that violates every value we have, not only as Americans, but as moral beings."

In May, an inspection at an El Paso Border Patrol station found that at one point 900 migrants had been crammed into the 125-person facility.

Do most illegal entries take place at the southern border?

Illegal border crossings are not limited to the southern border - in 2017, for example, there were also 3,027 illegal apprehensions along the Canadian border and 3,588 from the coastal border.

While cross-border migrants often make headlines, the largest number of illegal migrants settling in the US each year is those who stay in the country after their visas expire. This has been the case since 2007, official statistics say.

It's also important to note that, according to the Pew Research Center, overall the number of immigrants living in the US illegally has actually declined since 2007, in large part due to a dip in the number of people coming from Mexico. Apprehensions at the south-western border peaked at 1.64 million in 2000.

In total, Pew estimates that in 2017 there were 10.5 million unauthorised immigrants living in the US.

A White House briefing report on immigration says 3,755 known or suspected terrorists were prevented from entering the US in the fiscal year 2017.

But that includes terror suspects who have been stopped at any US border, and the vast majority are stopped at airports.