The first hearings for Democratic Senator Bernie Sanders' plan to revamp US health care began this week on Capitol Hill. It's a vision that has garnered support from some of Mr Sanders' 2020 presidential rivals and attacks from President Trump and his Republican party. So what is it?

It's widely known that the US has the most expensive healthcare system in the world, and health outcomes vary according to your means.

President Barack Obama tried to overhaul it. But even after his landmark Affordable Care Act, some 27 million Americans remain uninsured.

His successor in the White House has tried to dismantle that legislation, making healthcare a central issue in next year's presidential election.

Mr Sanders' so-called Medicare for All plan will play a big part in the debate.

Medicare is a federally run programme that offers health insurance coverage for Americans aged 65 and older, as well as individuals with certain disabilities or medical conditions. It covers both hospital and medical costs.

The programme is broken up into different plans (called Medicare A, B, C and D) that individuals can select depending on their needs. There are additional private plans available to supplement the basic coverage.

Most still require patients to pay annual premiums as well as deductibles (what patients pay for treatment before insurers step in) and co-payments (fixed cost of a service or prescription) that are set based on rates negotiated by the government with providers. These rates can change year to year.

Many people find they need supplemental insurance coverage even with Medicare, as the programme will only pay for 80% of approved medical costs or for 60 days of hospital care.

As it stands, Medicare is not a single-payer system since private insurers can participate.

What is Sanders proposing?

Medicare for All is a proposal to expand Medicare into a single-payer health system.

That means the federal government would be the sole, nationwide insurance provider for all essential and preventative healthcare.

Under Senator Bernie Sanders' proposal, first introduced in 2017 and re-introduced in April, Medicare for All would expand Medicare's coverage to include vision, dental, prescription drugs, nursing home care and reproductive health services.

The 2019 update to the plan also includes a long-term care coverage for patients with disabilities - amending one of the criticisms of his earlier plan.

The change also brings Mr Sanders' plan more in line with the version of Medicare for All proposed in the House of Representatives by congresswoman Pramila Jayapal of Washington state.

In four years, Mr Sanders' plan would have the country phase out of private insurance plans so everyone would receive insurance from the federal government.

The Affordable Care Act would also end, as users would be enveloped into the national plan.

Private insurance companies and employers would be banned from selling any manner of duplicate plans for services covered under the government's programme, though plans for non-essential medical services like cosmetic surgery could remain.

Mr Sanders' proposal would see an end to the "cost sharing" that makes up the current system: No deductibles, no premiums, no co-payments for care.

The only out-of-pocket expense under Mr Sanders' plan would be for some non-generic prescription drugs, but any cost to the patient would be capped at $200 annually.

For comparison, US patients in 2016 paid over $535bn for prescription drugs, according to government estimates.

Mr Sanders' Medicare for All would see a new 6.2% tax paid by employers on all wages; estate tax reforms; more taxes on the wealthy; and a 2.2% income tax on personal income with no credits allowed.

Ms Jayapal's plan mostly tracks with Mr Sanders', but also includes provisions to roll out the programme in two years instead of four, offer no out-of-pocket costs at all for prescriptions, and grant the government the ability to issue generic prescription licences to bring down costs if negotiating with companies fails.

In 2016, Bernie Sanders put universal healthcare on the map as a Democratic policy objective, even as Hillary Clinton scoffed that it was an unpractical and unachievable goal.

Now Mr Sanders is no longer a lone voice in the party.

Within the burgeoning field of Democratic presidential hopefuls, however, there are variations on the scope and speed of reform. Some would prefer to add a government-run option within the existing system. Others want to put private insurers out of business.

On Wednesday, Mr Sanders made clear once again he's in the latter camp. The plan the Vermont senator proposes would be more generous than government-run systems in other countries. That may appeal to voters - at least until the price tag is discussed.

Then expect some Democrats to again say enacting such a programme is unrealistic in the extreme. When it comes to healthcare, many Americans are fearful of disruptive change. The current system may be flawed, but its flaws are known.

Mr Sanders, who preaches "political revolution", doesn't do small and incremental, however. He's again cutting a path to the party's left. Can he again convince others to follow?

What are the arguments for Medicare for All?

With millions still uninsured - and forgoing care because they cannot afford treatments - Medicare for All would ensure healthcare is a right for all Americans.

The government's bargaining power would drive down healthcare costs, supporters say, pointing out that government health programmes like veterans' health already receive 50% in discounts on prescriptions.

And unlike the current system, where deductibles can be as high as $10,000 for patients before their insurance plans even kick in, Medicare for All would guarantee everyone could afford any care visits and prescriptions.

Medicare for All would remove health insurance responsibilities from employers and states as private insurance and Medicaid would be rolled into the federal plan.

Providers would not need to navigate a labyrinthine system to file reimbursement claims and it would be easier for patients to understand and use the system.

Bringing down rates for services and prescriptions would help lower the overall cost of the health system.

Administrative health costs could also be reduced by $400bn under Medicare for All, according to The Physicians for a National Health Program group.

A nonpartisan report by the Congressional Budget Office on 1 May also found that a government-run plan would probably lower administrative costs.

Other analyses have also found that a single-payer plan would ultimately reduce total national healthcare spending. University of Massachusetts Amherst economist Prof Gerald Friedman estimated savings could be between $5.5tn and $12.5tn in the next decade.

One report by the Citizens for Tax Justice advocacy group found that for all but the highest-earning Americans, Mr Sanders' plan would result in an increase in post-tax income.

A study by the conservative-leaning Mercatus Center also found that Mr Sanders' plan could see a $482bn decrease in health spending and $1.5tn in administrative cost reductions, amounting to a $2tn decrease in health spending in a decade compared to current projections - but noted that "the actual cost of [Medicare for All] would be substantially greater than these estimates" as they assume "significant" and "dramatic" savings.

And what are the arguments against?

A fear of higher taxes is perhaps the biggest reason for pushback against a national health programme.

Under Medicare for All, nearly all residents would see new annual taxes.

But some experts worry Mr Sanders' current tax plan would not adequately finance a Medicare for All programme, and that actual taxes could end up being even higher.

Mr Sanders in 2016 estimated his plan would cost $1.38tn per year, while opponents say costs could be double that.

Medicare for All would increase government spending in a decade by anywhere from $25tn to $35tn according to US economists and think tanks.

Both Mercatus and the Urban Institute - institutions that lean conservative and liberal respectively - put 10-year costs at least around $32tn.

Mercatus' Charles Blahous has since clarified his report on the programme's cost, saying he believes it would actually cost between $54tn and $60tn over a decade.

Pay cuts all around

Private insurance companies would essentially be eliminated. In addition, with the government setting prices, both providers and pharmaceutical companies would also face profit losses.

The Mercatus study noted that for the Medicare for All plan's savings to work, providers must acquiesce to a 40% reduction in reimbursements compared to current private insurance payments.

Tied to profit reductions, opponents say the quality of healthcare could be negatively affected if providers face deficits and disruptions, warning that hospitals could quickly go out of business.

The issue of wait times is also one many Americans are wary of given horror stories of year-long waits for surgeries from the NHS and Canada - opponents say the increased number of patients in the system may overwhelm providers already dealing with budget cuts.

Democrats just announced their government takeover of healthcare plan which confiscates every American's private health insurance. Stand with President Trump so America will never be a socialist country!

The Budget Office report also noted a single-payer plan would "put pressure on the available supply of care" and "patients might face increased wait times and reduced access to care" in the short term.

Some of those against federal intervention in the health system have cautioned that cutting payments to the health industry would stifle US innovation.

Under Medicare for All, abortions would be covered by the federal insurance plan - an aspect that will certainly draw criticism from conservative groups who are already outspoken against any federal funding for the controversial procedure.

Support for a national healthcare system has somewhat increased overall, national polls say, but the divide along political lines has deepened.

A Harvard-Politico poll in January found 68% of Americans said working on a plan like Medicare for All should be a top priority for Congress.

The nonpartisan Kaiser Family Foundation (KFF) similarly reported six in 10 Americans are in favour of a national health system. But support for Medicare for All fluctuates based on how it's described, the March poll found. 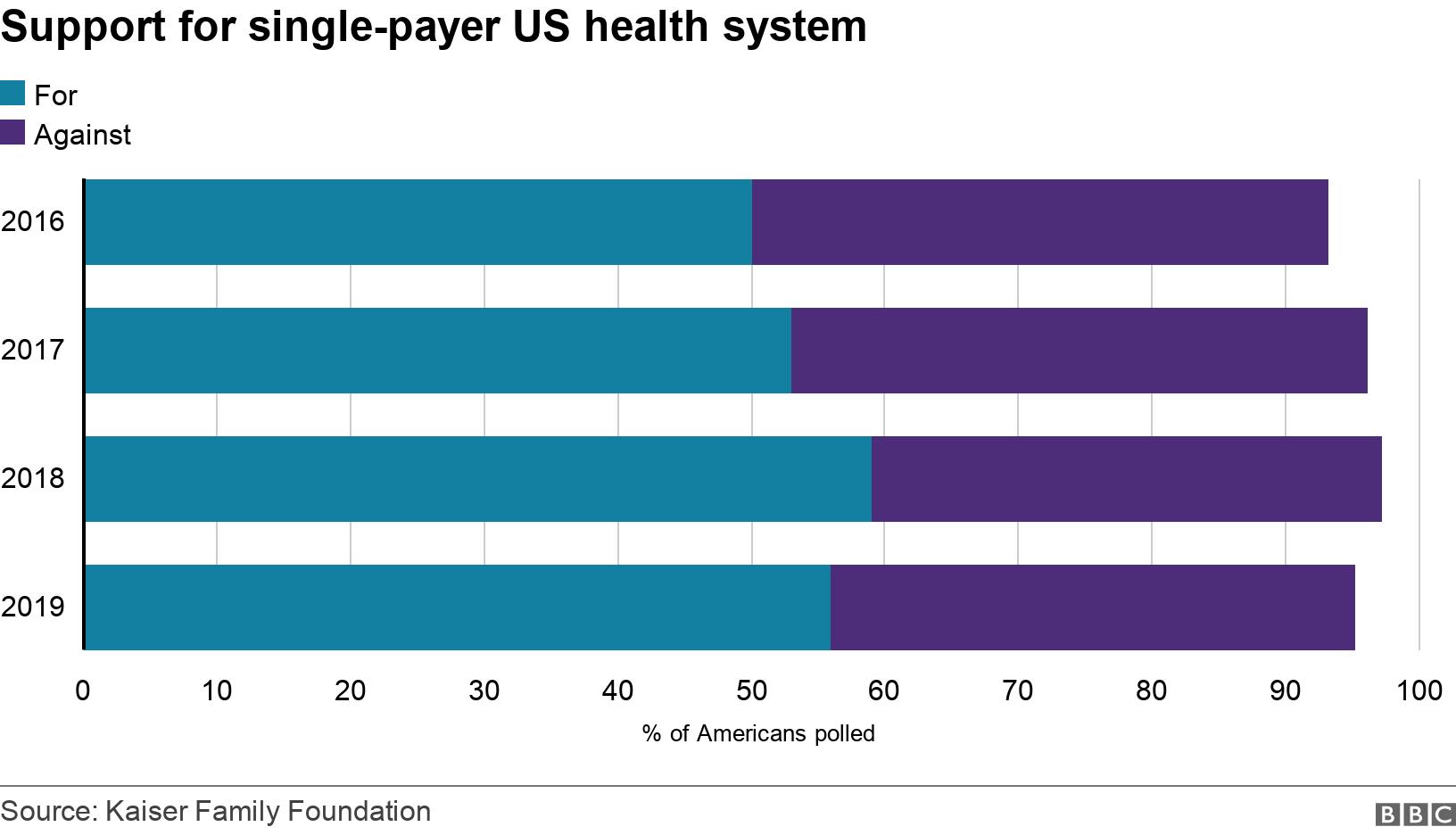 Americans are in favour of a system that covers everyone and ends premiums and out-of-pocket payments, but the idea of higher taxes or wait times for care sees support sharply decrease.

An optional Medicare for All plan that would allow people to retain their current insurance garnered more bipartisan support in the KFF poll, with 74% support overall and 47% support from Republicans.

How does the US compare to other systems?

Firstly, it's a lot more expensive in terms of cash spent.

Most government-funded health plans around the world do require individuals to pitch in, making these Medicare for All proposals more generous than anything currently in place. 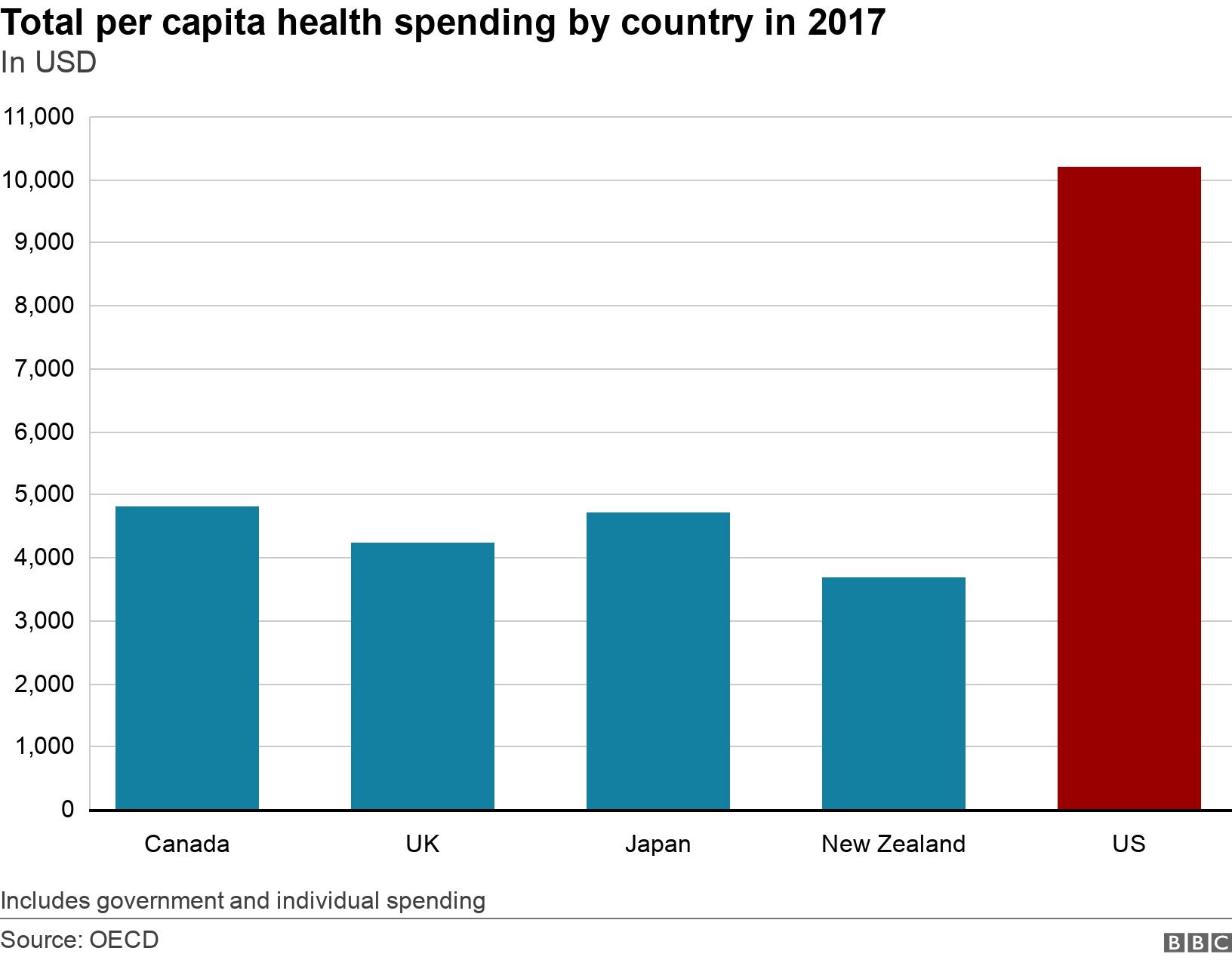 An important distinction to make when comparing Medicare for All to systems like the NHS is that this is still not socialised care. In the US, the Veterans Health Administration, for example, operates on a socialised medical system like the NHS, with federally run hospitals.

Medicare for All would move the entire US system into a single-payer, social insurance model - very similar to Canada.

Canada's government funds universal healthcare coverage by reimbursing private providers. Provinces and territories are able to operate their own programmes with varying levels of coverage, so it is not entirely controlled by the federal government.

Under the Canadian system, patients still largely need to pay for their own dental and vision care as well as some prescriptions.

In the UK, in addition to covering the costs of care, the government owns hospitals and employs physicians. Prescriptions in hospital are free and those for outpatients are subsidised, so that patients generally only pay a minimum co-payment - usually around $12 (£9). For some groups, prescriptions are completely free, like those under 16, the elderly or full-time students up to age 18.