As the pandemic continues to sweep the US, Canadians are getting more and more concerned about what American visitors could be bringing with them over the border.

Built directly on the border of Blaine, Washington and Surrey, British Columbia, the Peace Arch is a 67-foot high (20 metres) testament to the close ties between Canada and the US.

Inscribed on one side are the words "May these gates never be closed", a reminder of the nearly 8,891 km (5,525 miles) of un-militarised border that separates the two nations.

For almost 100 years, those words have been heeded - until the coronavirus pandemic effectively shut the border indefinitely.

The closure came into effect on 21 March, and was agreed upon by both governments. After being extended several times over the summer, it remains in effect until 21 September.

"I never thought I'd be sitting here mid-August and that border is still closed," says Len Saunders, a dual citizen who lives in Blaine.

"It just seems to be dragging on and on and on with no end in sight."

While the border closure has had significant economic and personal repercussions for the millions of people that live along it or have loved ones on the other side, the vast majority of Canadians want it to stay shut.

A July poll by Ipsos Reid found that eight in ten Canadians wanted the border to stay closed until at least the end of 2020.

And as the pandemic has continued to spread across the US, so have tensions between American drivers and Canadian residents.

While non-essential travel is forbidden, commercial drivers delivering goods and people who work across the border in essential services are permitted to cross.

People with American licence plates have reported being harassed and having their vehicles vandalised, even if they have every right to be on the Canadian side.

Mr Saunders, an immigration lawyer who has many clients who cross the border regularly in order to work, says many people are afraid.

"They're all scared of driving their cars in the lower mainland because of vandalism, dirty looks and just getting treated as some 'horrible American'," he told the BBC.

One of his clients, an architect who was allowed to practise in Canada during the shutdown, says he was told to "go back home" because of his car.

The tensions are so high that British Columbia Premier John Horgan suggested that Canadians with out-of-province licence plates should take the bus or ride bikes instead.

In the Muskoka region of Ontario, where many people have summer homes, the hostility has garnered police attention.

Ontario Provincial Police say a Canadian in the town of Huntsville filed a complaint after two men allegedly accosted him over his Florida licence plate.

"Most recently this weekend, there was a gentleman up towards Huntsville getting gas in his vehicle, and two gentlemen approached him and said, 'you're American go home.' And he said, 'I'm Canadian. I live here.' And they literally said, no, we don't believe you show us your passport," Phil Harding, the mayor of nearby Muskoka Lakes, told CP24.

Those caught breaking the rules can face serious consequences.

In Grand Forks, British Columbia, the Royal Canadian Mounted Police spent over two hours chasing a man, who allegedly had crossed illegally in a stolen vehicle on 24 July, down a river. The "float chase" ended where the river narrowed, when police, with the help of bystanders, were able to wade into the river and escort him back to shore.

Charges are pending, but anyone caught breaking the border restrictions can be fined up to C$750,000 ($566,000; £434,000) and be sentenced to six months in jail, or C$1m and three years if their actions "cause risk of imminent death or serious bodily harm".

On Wednesday, police warned Americans participating in an annual float down the St Claire River near the Michigan border that even accidentally crossing into Canada could lead to a hefty fine. In 2016, during more carefree times, Canadian police congenially escorted about 1,500 floaters back to the US side after winds blew them off course.

Still, the effects of the border closure on the small towns along either side are not insignificant.

Before coronavirus, around 300,000 people crossed the border every day, including Canadians who routinely made daytrips to score a deal at US outlet malls or petrol stations, and American tourists exploring the wonder of Niagara Falls. 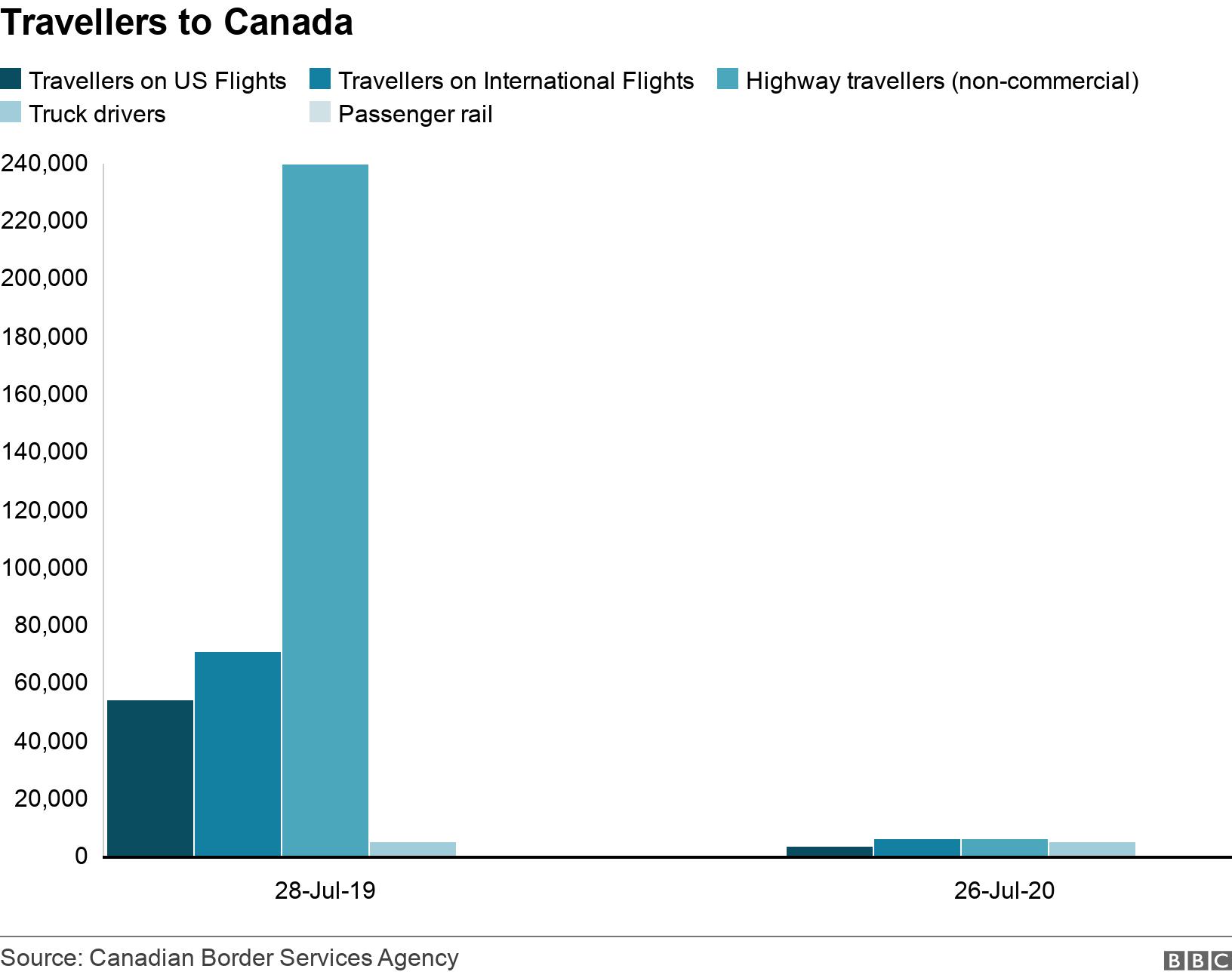 Since March, non-commercial land border crossings to Canada have dropped by nearly 95%, according to the Canadian Border Services Agency (CBSA).

"It's going to decimate everything up there," Mr Saunders says.

But the economic impact of closing the border to travellers is nothing compared to what would happen to Canada if another wave of coronavirus forced a second shutdown, says Ambarish Chandra, a professor of economics at the University of Toronto.

"This travel does have a lot of economic impact on the communities where travellers go to," he says.

"But given the pandemic in the US, and the number of cases there, it makes sense to restrict travel to the US - potentially indefinitely."

Prof Chandra says government should provide aid to border towns whose economy relies heavily on foreign tourism, but hold steady with the border closures until the pandemic is over.

"In the long run it's way cheaper to bail out all of Niagara Falls, Ontario, than to close down Toronto for even another three or four weeks," he says.

After months of shuttering most businesses, Canada's coronavirus cases are dropping and the country is in the middle of re-opening its economy. Daily cases have dropped from a high of 2,760 on 3 May to a few hundred.

Restaurants and shops have been open for at least a few weeks in most major cities, and so far, cases are still trending downwards. 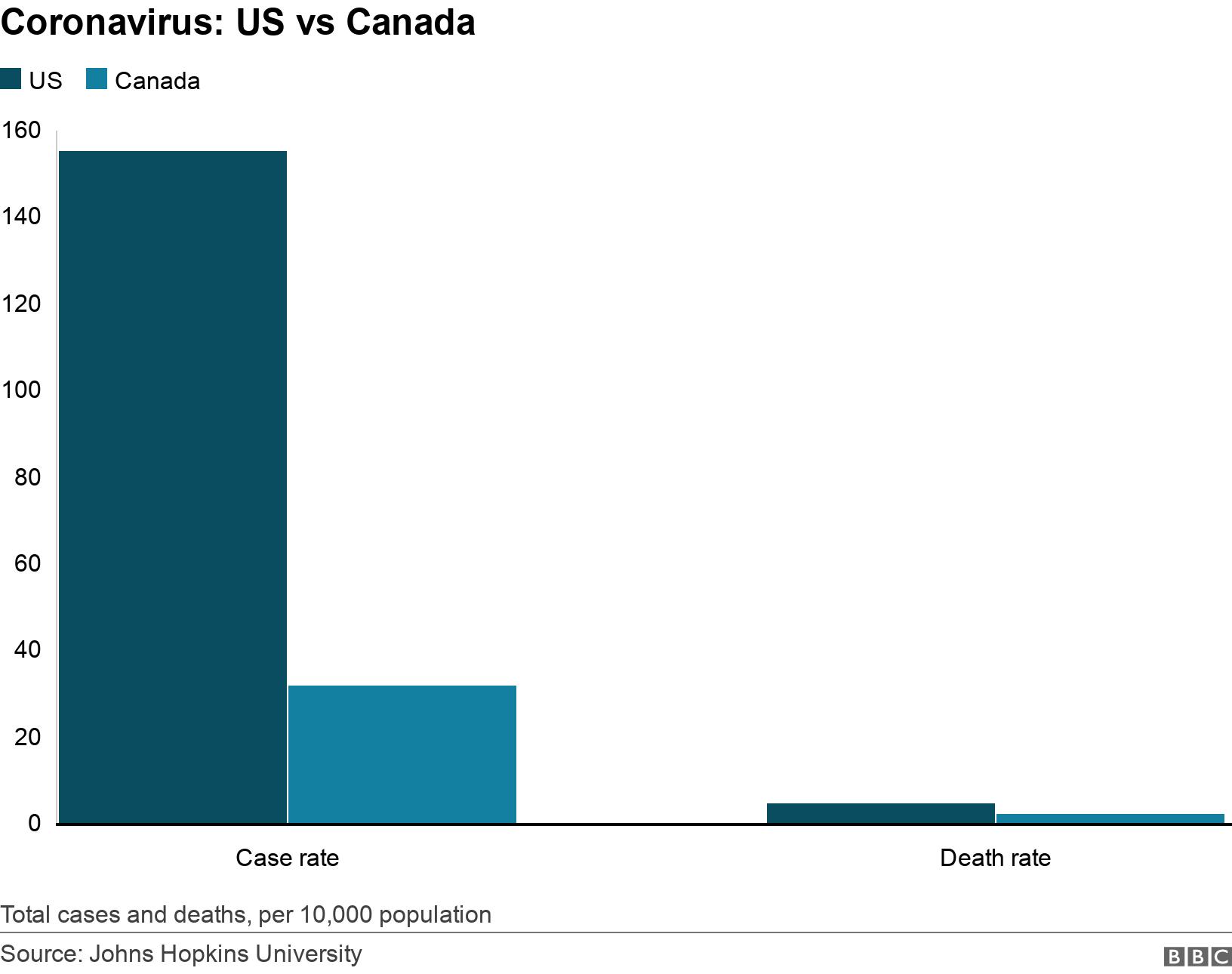 Those numbers are what's fuelling the unease many Canadians have with American travellers.

"Montana is directly south of us, is having a second spike of cases right now, and I don't feel sorry for anybody that gets stopped at the border, let's put it that way," says Jim Willett, the mayor of Coutts, Alberta.

"I'm afraid if we opened up the border too soon, we might have more of a problem like what's going on down south."

His town is one of the five border towns where US residents travelling to Alaska can enter Canada, since the CBSA cracked down on the so-called "Alaska loophole" at the end of July.

Since Alaska shares no borders with other US states, Americans who drive there on land have to go through Canada, hence the "loophole".

After the border closed, many have expressed concern that drivers have been exploiting the loophole to explore some of the country's most scenic places, like Vancouver Island and Banff, Jasper, and Lake Louise.

"Do not pass go. Go directly to Alaska," Premier Horgan said during a news conference in July.

Complaints about the loophole and the lack of enforcement led to the crackdown.

At the end of July, the border authority announced that Alaska-bound travellers had only limited points of entry, must take the most direct route to their destination, and should display tags in their vehicle identifying them as US drivers going to the northern state.

They are also limited to a "reasonable period of stay" in Canada, and are forbidden from visiting national parks, leisure sites and other tourist destinations, with rule-breakers facing the stiff penalties.

Since the tougher rules have been enacted, Mr Willett says he's not "too concerned" about the traffic coming over the border.

"[We] get quite a few people through all times of the day and night. Most of them are quite co-operative," he says.