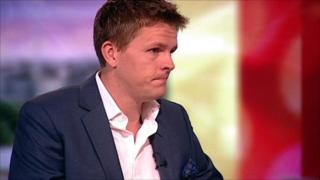 Sports Personality of the Year presenter Jake Humphrey talks to BBC Breakfast's Chris Hollins about the lack of female athletes on this year's shortlist of 10 contenders.

The list was put together by a panel of sports editors from national and regional newspapers and magazines, but contains no female athletes.

The winner will be selected by public vote during the live show on Thursday, 22 December from 2000 GMT.