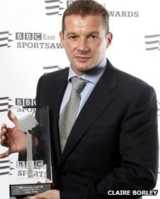 "Prior to all of this I was an underpaid, overworked civil servant. Now I'm an underpaid athlete."

Colorado-based Wellington, who is the world record holder in the ironman-distance triathlon event, claimed her fourth world championship this year despite severe bruising from a training accident.

She also broke her own world record in July, recording a time of eight hours, 18 minutes and 13 seconds across the 2.4-mile swim, 112-mile cycle and marathon run.

But Wellington has been critical of the omission of women from the BBC's national Sport Personality of the Year award.

"I feel really strongly that the awards are an incredible platform for the winner to raise the profile of themselves and their sport," she explained at the East's awards, held on the Bedford campus of the University of Bedfordshire.

"That's the message I was trying to convey. I feel women have performed in such a way that warranted their nomination."

Cook, whose year has included being named England's one-day captain and a memorable innings of 294 against India in the summer, spoke to the audience by recorded message.

"It's a huge honour to receive this award," he said. "Bedford brings back memories for me.

"The highlight of the year will always be the Ashes. It's been a fantastic year and hopefully it will continue into 2012."

Foster, 42, won coxless four gold in Sydney in 2000 alongside Steve Redgrave, Matthew Pinsent and James Cracknell and is a two-time world champion.

"It's a massive shock and honour," he said on receiving the prize. "I'm a proud Bedford boy and I'm proud of this region.

"I feel slightly unworthy of the award looking at the other winners."