Retired rugby union stars Josh Lewsey, Gareth Thomas, Shane Byrne and Kenny Logan are set to go into battle on behalf of their countries once again as they compete in the First Nation Home challenge for Sport Relief.

The rugby quartet will be joined by countrymen from the world of sport and entertainment as teams from England, Ireland, Scotland and Wales race over 1,000 miles around the UK - sailing, running, rowing and cycling - over a seven-day period from 10-17 March. 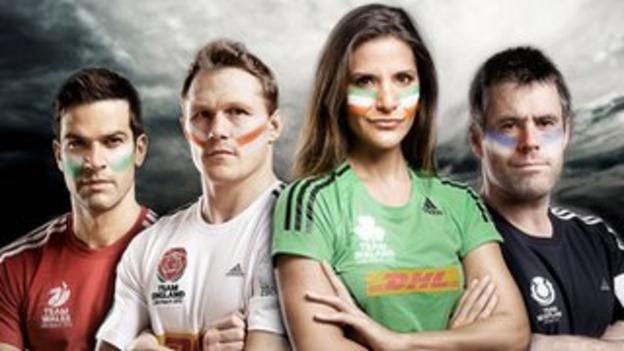 The teams will start simultaneously from London, Belfast, Edinburgh and Cardiff at 0700 GMT on Saturday 10 March before travelling around the UK and finishing back at their home venues on Saturday 17 March.

As well as being encouraged to go along to support the teams, members of the public also have the chance to represent their country alongside the celebrities for the final stage of the challenge - a six-mile run in Cardiff, Belfast, Edinburgh or London on Sunday 25 March. Participants can register at firstnationhome.com

England captain Lewsey, said: "It's been very competitive between the teams, and we're confident we can bring the trophy back to London.

"Most importantly, it's a great way for the public to get involved and help us raise money for a fantastic cause."

While running and cycling will be the main parts of the challenge, the teams will also have to sail 50 miles - from Larne in Northern Ireland to Stranraer in Scotland - and, in a task with a bit of a twist, row from Liverpool to Dublin.

Teams will actually take a ferry to Ireland but while on board they will complete 136 miles on a rowing machine.

Wales' team captain, former Blue Peter presenter Gethin Jones, sounded a confident note, saying: "Everyone representing Team Wales has been training extensively over the past few months in preparation for what's sure to be a tough week.

"We're all looking forward to getting started."